About this publication on Health Effects of Artificial Light

1. Source for this Publication 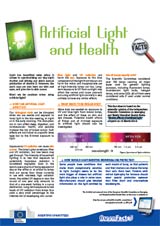 Citizen's summary : a simple pdf with the essential points on this topic. (1 page, 0.3 MB)

The texts quoted in Level 3 are directly sourced from the "Opinion on Health Effect of Artificial Light", produced in 2012 by the SCENIHR (Scientific Committee on Emerging and Newly Identified Health Risks) of the European Commission.

Levels 1 & 2 were written by Dr. Marisa Fernandez in collaboration with the editorial team of GreenFacts and the DG Health and Consumers of the European Commission.

This publication is produced by Cogeneris under a contract from the DG Health and Consumers of the European Commission.

The Committee provides opinions on emerging or newly-identified health and environmental risks and on broad, complex or multidisciplinary issues requiring a comprehensive assessment of risks to consumer safety or public health and related issues not covered by other Community risk assessment bodies.

Potential areas of activity include:

It may also be invited to address risks related to public health determinants and non-transmissible diseases.

3. Background to this SCENIHR opinion

Within the context of the promotion of the wide-spread use of energy saving lamps such as compact fluorescent lamps, and the upcoming phase-out of incandescent lamps, the Commission mandated SCENIHR in April 2008 to look into the claims of light sensitive citizens' associations such as Right to Light, Spectrum Alliance and Lupus UK that the symptoms of some diseases are, or could be, aggravated in the presence of energy saving lamps (mainly compact fluorescent lamps).

In reply to this mandate, SCENIHR delivered an opinion on Light Sensitivity on 23 September 2008 (SCENIHR 2008), which identified blue light and ultraviolet radiation “as a potential risk factor for the aggravation of the light-sensitive symptoms in some patients with such diseases as chronic actinic dermatitis and solar urticaria”. The committee also noted that “some single-envelope compact fluorescent lamps (CFLs) emit UVB and traces of UVC radiation. Under extreme conditions (i.e. prolonged exposures at distances less than 20 cm) these CFLs may lead to UV exposures approaching the current workplace limit set to protect workers from skin and retinal damage.” However, “the use of a second lamp envelope or similar technology could largely or entirely mitigate both the risk of approaching workplace limits on UV emissions in extreme conditions and the risk of aggravating the symptoms of light-sensitive individuals.”

Since the publication of the opinion and the adoption of Commission Regulation 244/2009 setting ecodesign requirements for non-directional lamps (in practice phasing out incandescent lamps by 2012), further claims and facts relating to light sensitivity and to the potential health effects of artificial light have been brought to the attention of the Commission:

Taking into account the above, it is considered necessary to ask SCENIHR to update the conclusions of its opinion on Light Sensitivity as appropriate and to carry out an analysis of a wider range of lighting technologies and of associated potential health risks. Considering the scarcity of scientific evidence in relation to many of the questions raised, the assessment of the plausibility of the alleged health effects followed, if required, by the identification of potential research needs, is likely to be an important part of SCENIHR's work.

A public consultation on this opinion was opened on the website of the EU non-food scientific committees from 19 July to 30 September 2011. Information about the public consultation was broadly communicated to national authorities, international organisations and other stakeholders.

In total, 16 contributions were received of which four were from public authorities, five from industry, one from academia, two from NGOs and six from individuals and three others.

Most of the material submitted was relevant, contained specific comments and referred to peer-reviewed scientific literature. As a result, each submission was carefully considered by the Working Group. Only three submissions from industry disagreed with the preliminary opinion and the submission from academia showed some disagreement.

The document has been revised to take account of the relevant comments and the literature has been updated with relevant publications. The scientific rationale was clarified and strengthened in certain respects. The opinion, however, remained essentially unchanged.

The "Opinion on Health Effect of Artificial Light" was adopted by the SCENIHR on 19 March 2012.

4. Specific questions asked by the European Commission to the SCENIHR

The SCENIHR was asked in its "Opinion on Health Effect of Artificial Light" to assess the following:

The scope of the analysis under points A and B should cover all electrical lamp technologies, including conventional incandescent and halogen lamps, halogen lamps with improved efficiency, single-capped (compact) and double-capped fluorescent lamps, high-intensity discharge lamps and light emitting diode lamps. The full range of possible lamp luminous fluxes and lamp voltages (mains voltage, extra low voltage and other low voltages) should be covered by the analysis of each technology, and if appropriate, separate conclusions should be drawn for the different voltage/luminous flux categories.

Partner for this publication

The Three-Level Structure used to communicate this SCENIHR Opinion is copyrighted by Cogeneris sprl.