No planned update of the article. 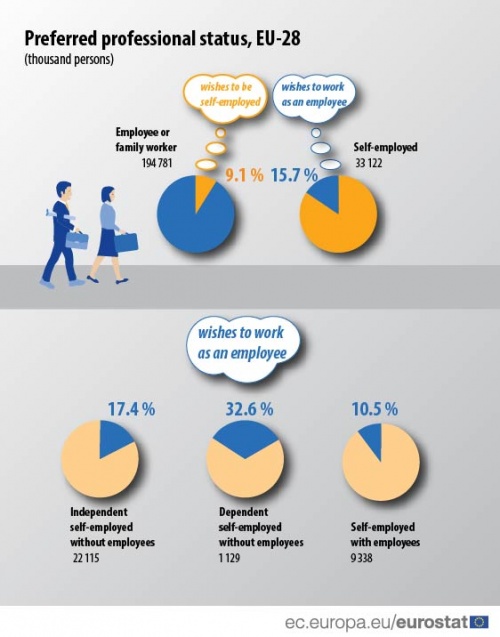 The 2017 Labour Force Survey (LFS) ad-hoc module targets the self-employed and the persons at the boundary between employment and self-employment. It aims moreover to measure the degree of economic and organisational dependency of the self-employed, defined on the basis of the number of clients and the percentage of income coming from a client as well as in terms of control over working hours.

Figure 1 shows the number and importance of clients in the last 12 months. This variable is one of the three variables [1] chosen in the context of the 2017 module to define the economically dependent self-employed. One aspect of dependency can indeed be linked to having only one client or having a dominant one (in terms of income) among several clients. In 2017, 18.2 % [2] of the self-employed in the EU-28 reported having just one client or a dominant client. Differences can be observed among the EU Member States: the highest percentage of self-employed persons having just one client or a dominant client was observed in Hungary (32.9 %) and Slovakia (31.9 %), while the lowest rate was recorded in Croatia (9.2 %). 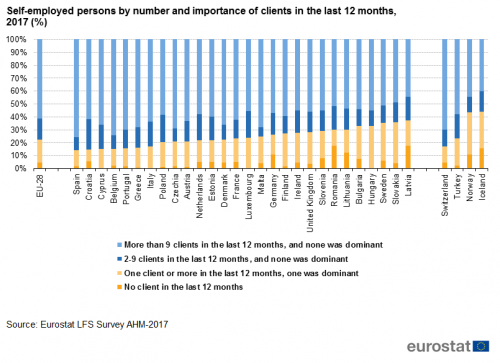 Figure 1: Self-employed persons by number and importance of clients in the last 12 months, 2017
(%)
Source: Eurostat (lfso_17seclnt) 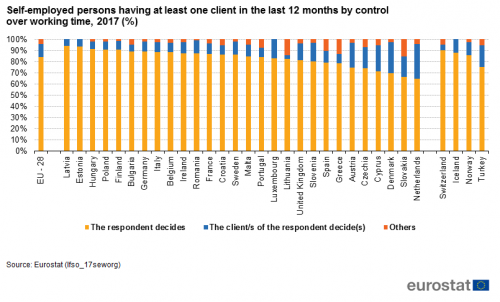 Figure 2: Self-employed persons having at least one client in the last 12 months by control over working time, 2017
(%)
Source: Eurostat (lfso_17seworg)

Only 3 % of the self-employed dependent on a dominant client

According to the operational definition adopted by Eurostat in the context of the 2017 module, the economically dependent self-employed were defined as the self-employed without employees who worked during the last 12 months for only one client or for a dominant client, and this client decided about their working hours.

Infographic 1 presents the repartition of self-employed persons according to the three main criteria used to define the dependency: 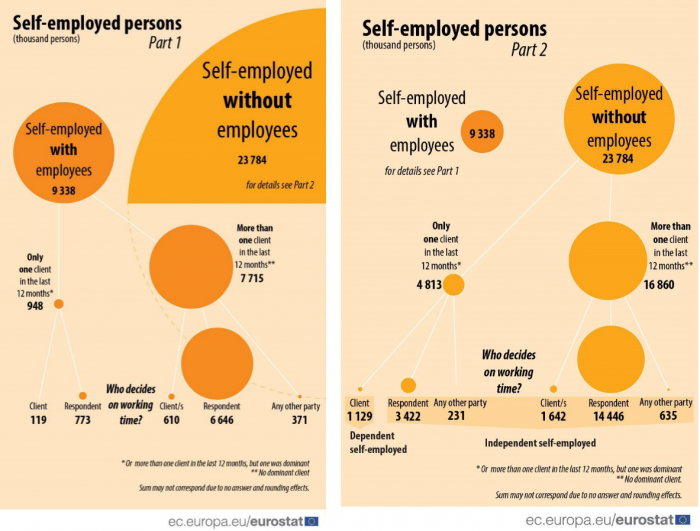 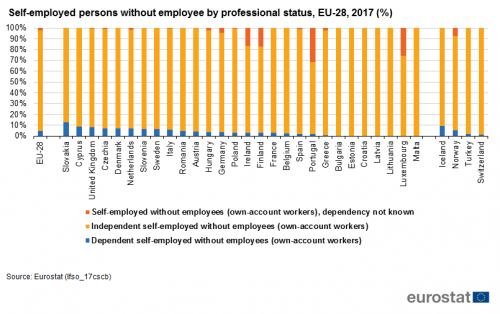 The definition of the economically dependent self-employed chosen in the context of the 2017 module should nevertheless be considered as a first approach to the concept. Discussions are currently ongoing at international level (with the International Labour Organisation) on the definition to adopt. Two other variables of the 2017 module, on job autonomy and business partners, can be part of the discussions for the revision of the current definition. 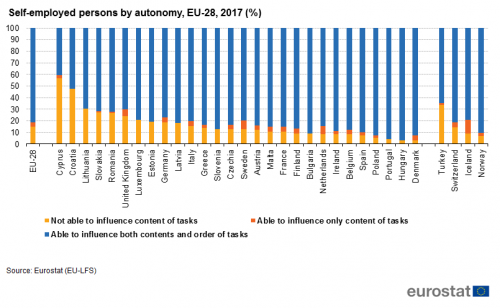 Job autonomy is highly correlated with the number and importance of clients (see Figure 5). The percentage of self-employed being able to influence both the content and order of tasks equals 84.9 % among those having more than 9 clients, while it only reaches 71.0 % for those with one client or one dominant client. The rate for the self-employed having between 2 and 9 clients lies in the middle, at 81.3 %. 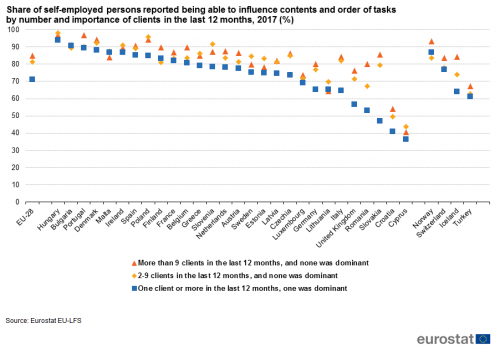 Figure 5: Share of self-employed persons reported being able to influence contents and order of tasks by number and importance of clients in the last 12 months, 2017
(%)
Source: Eurostat EU-LFS 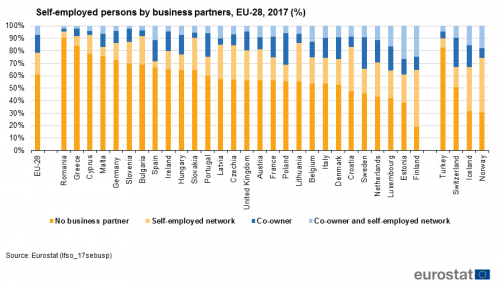 17% of the economically dependent self-employed in the construction sector 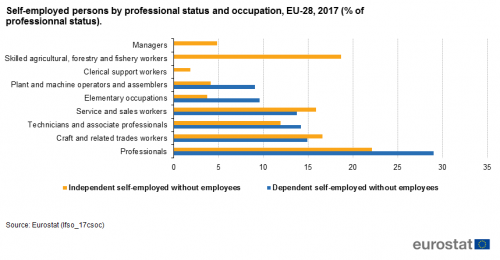 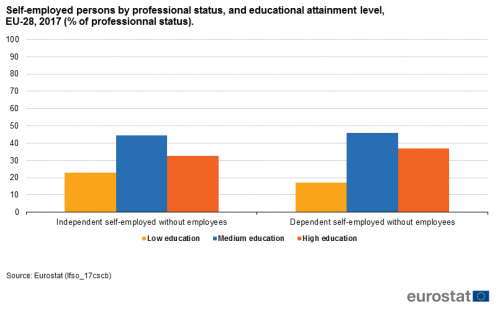 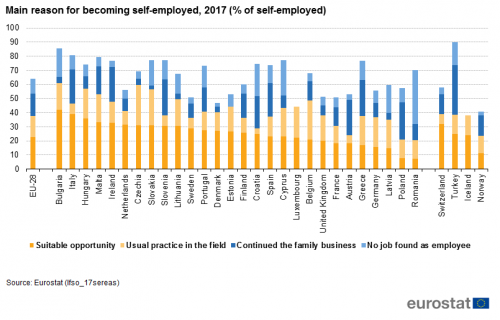 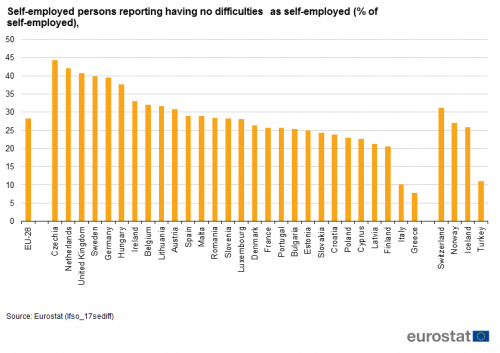 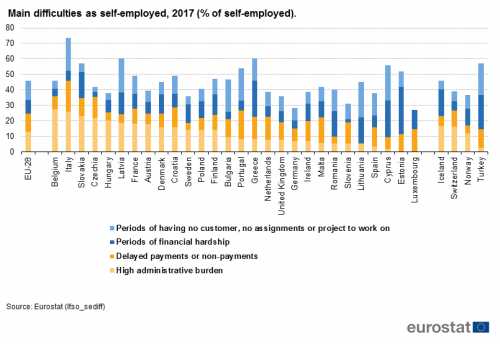 Figure 13 compares job satisfaction between the different professional status. Self-employed persons are generally more satisfied than both employees and contributing family workers (see Figure 13). The majority of the self-employed with employees (53.3 % at EU level) declared being highly satisfied with their current job. This was followed by the independent self-employed without employees (46.1 %) and then the employees (42.1 %). Contributing family workers recorded the lowest share of persons being highly satisfied with their job (30.0 %). 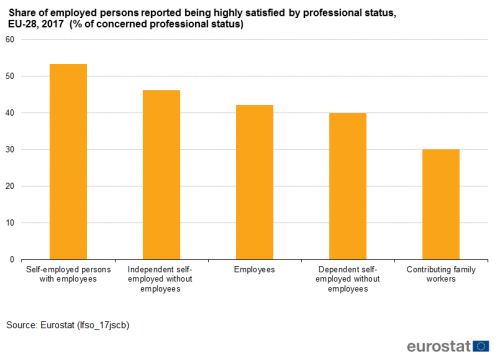 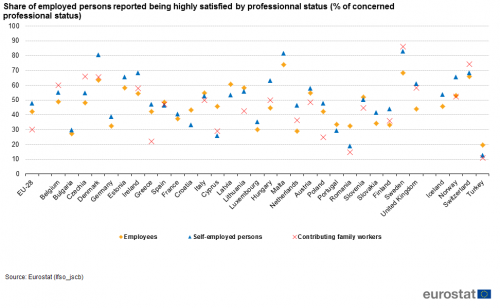 The data source for this article is the European Labour Force Survey ad hoc module 2017, covering all Member States, as well as Iceland, Norway, Switzerland and Turkey.

Employment statistics are at the heart of many EU policies. The European employment strategy (EES) was launched at the Luxembourg jobs summit in November 1997 and was revamped in 2005 to align the EU’s employment strategy more closely to a set of revised Lisbon objectives, and in July 2008, employment policy guidelines for the period 2008–2010 were updated. In March 2010, the European Commission launched the Europe 2020 strategy for smart, sustainable and inclusive growth; this was formally adopted by the European Council in June 2010. The European Council agreed on five headline targets, the first being to raise the employment rate for women and men aged 20 to 64 years old to 75 % by 2020. EU Member States may set their own national targets in the light of these headline targets and draw up national reform programmes that include the actions they aim to undertake in order to implement the strategy. The implementation of the strategy might be achieved, at least in part, through the promotion of flexible working conditions — for example, part-time work or work from home — which are thought to stimulate labour participation. Among others, initiatives that may encourage more people to enter the labour market include improvements in the availability of childcare facilities, providing more opportunities for lifelong learning, or facilitating job mobility. Central to this theme is the issue of ‘flexicurity’: policies that simultaneously address the flexibility of labour markets, work organisation and labour relations, while taking into account the reconciliation of work and private life, employment security and social protection. In line with the Europe 2020 strategy, the EES encourages measures to help meet three headline targets by 2020, namely, for:

Employment and social policies are also the main fields of interest of the European Pillar of Social Rights, which is about delivering new and more effective rights for citizens. It has 3 main categories: (1) Equal opportunities and access to the labour market, (2) Fair working conditions and (3) Social protection and inclusion. In particular, today's more flexible working arrangements provide new job opportunities especially for the young but can potentially give rise to new precariousness and inequalities. The Commission wants to explore ways of providing as many people as possible with social security cover, including self-employed and gig-economy workers. In practice, these people should also be able to build up rights against contributions.

Consequently, in order to monitor progress towards the objectives set out in the Europe 2020 Strategy and the European Pillar of Social Rights, it is namely necessary to have a comprehensive set of data on self-employment which allows comparisons between EU Member States. More specifically, the 2017 Labour Force Survey (LFS) ad-hoc module answers the data needs linked to the 'Small Business Act’ [3] and the 2012 Commission Communication 'Towards a job-rich recovery’ [4] as part of the Employment Package, which encourages job creation specifically through promoting and supporting self-employment.

The target population of this ad-hoc module is persons in employment, that is, both employees and self-employed, but it aims to investigate on the economically dependent self-employed, which are defined as self-employed without employees AND who have either only one or one main client AND whose (one or main) client decides the working hours. This is a much debated group over the last decade, but there is a pronounced lack of internationally comparable quantitative data on them, and this ad-hoc module is the first large scale attempt to find and classify them.