In 2020, almost half of all goods imported into the EU were invoiced in US dollars. 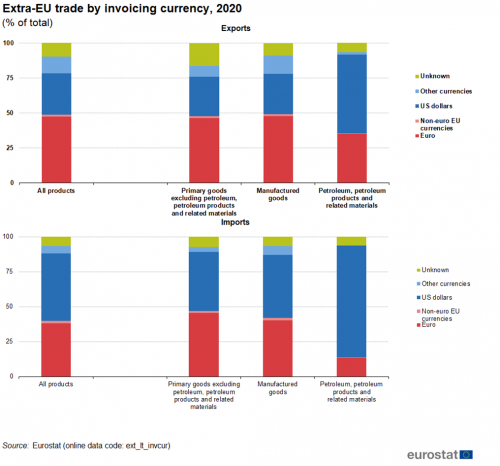 Economic theory suggests those currencies that are ‘liquid’ (in other words, the ones which have the highest volume of trade) have low transaction costs and are therefore more likely to be chosen as a preferred (and efficient) means for exchanging goods. Choices over invoicing currencies have the potential to impact on a country’s trade balance as a result of exchange rate movements. Note that the start of Globalisation patterns in EU trade and investment (chapter 1) provides further information on the development of global commodity prices and exchange rate fluctuations.

In a globalised world, there are a number of factors that may determine the invoicing currency that is used in any trade transaction. The choice may reflect particular standards within specific sectors, for example, the price of oil and petroleum products is almost always denominated in dollar terms, or alternatively it could be related to historical trading relationships between a pair of countries. From an enterprise perspective, the choice is not neutral insofar as traders are exposed to exchange rate risks; indeed, both sides of the trading relationship are usually affected by opposing risks. Importers usually want to limit the share of foreign currency invoicing in order to reduce their risk, whereas an exporter may wish to unilaterally determine the currency of payment so as to maximise export earnings. Some exporters with particularly large export markets prefer to limit the price volatility of their goods abroad by opting to use the invoicing currency of their trading partner; in so doing they have greater control over the price of their goods relative to competitors in the foreign market.

When enterprises are forced to invoice in a foreign currency they may try to reduce their risk through the use of different financial products, for example, trading credits or hedging instruments; these facilities tend to be more widely available for large enterprises. It may be particularly important to hedge against exchange rate movements in those industries characterised by lengthy production chains (for example, the manufacture of a ship or an aircraft) or in those cases where a large volume of trade is conducted on futures markets. As such, within the context of globalisation, large multinational enterprises may have a greater opportunity to benefit from the flexibility of managing their exchange rate exposure through transfer pricing and operational hedging.

In 2020, almost half of all goods imported into the EU were invoiced in US dollars

As noted above, some primary products that are widely traded on global markets tend to be invoiced exclusively in a single currency, the most well-known examples being the price of oil or gold. Given the EU imports large quantities of crude oil, it is perhaps unsurprising to find that 79.9 % of the EU’s imports of petroleum, petroleum products and related materials were invoiced in US dollars, compared with just 13.6 % in euro terms. By contrast, for primary goods other than petroleum, the share of imports invoiced in euro (45.4 %) and in US dollars (42.3 %) was almost identical.

The picture was reversed for exports, as almost half (47.5 %) of goods that left the EU that were destined for non-member countries were invoiced in euros, while just under one third (29.4 %) were invoiced in US dollars. The share of EU exported goods denominated in euro terms was systematically higher than the share of imports denominated in euro terms for each of the three product groups shown in Figure 1. The euro was the preferred currency for exporters of primary goods excluding petroleum (46.2 % of the EU’s exports were denominated in euros) and manufactured goods (47.7 %). However exports of petroleum, petroleum products and related materials were mostly invoiced in US dollars (56.3 %).

The euro was the most used currency for extra-EU exports

In 2020, the euro was the most used currency for extra-EU exports in 20 of the EU Member States … 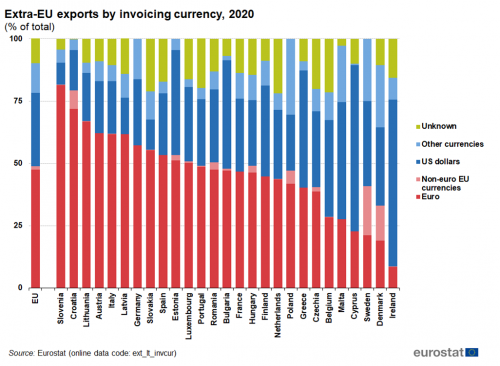 … while the US dollar was the most used currency for extra-EU imports in 21 of the EU Member States.

In 2020, the US dollar was the predominant invoicing currency among EU Member States concerning extra-EU imports (see Figure 3): in 21 of the 27 EU Member States, the US dollar was the most popular invoicing currency. The highest share (63.6 %) was recorded in Greece. The relatively high exposure of Greece to the maritime transportation sector may explain, at least to some degree, why it has a high share of transactions denominated in dollar terms. Quite likely the US dollar is also the most used currency for Irish imports but due to the large share were the currency is unknown this is not absolutely certain. 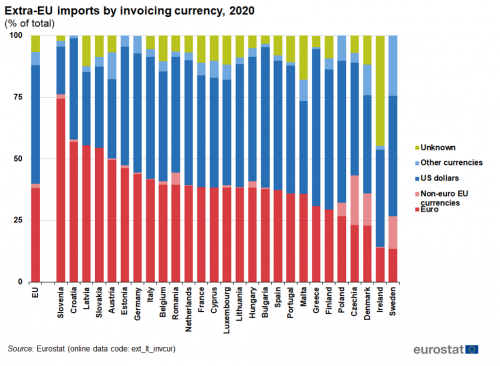