The EU has a common trade policy, whereby the European Commission negotiates trade agreements and represents the EU’s interests on behalf of its 27 Member States. As such, trade policy is an exclusive power of the EU — so only the EU, and not individual Member States, can legislate on trade matters and conclude international trade agreements. This article covers the specific topic of tariffs that may be imposed on traded goods.

The benefits of free trade are mentioned in a separate chapter in the online publication: when making trade deals, the EU seeks to tackle those things that get in the way of trade when dealing with other countries. Depending on the agreement, such deals may lead to a series of commitments on behalf of the parties concerned, for example:

For more information, refer to the European Commission’s Directorate-General for Trade website.

The European Commission negotiates trade deals either directly with other countries or regions, or through its membership of the World Trade Organisation (WTO). The WTO is the only international organisation dealing with multinational trade issues — the global rules of trade between nations; its main function is to ensure that trade flows as smoothly, predictably and freely as possible. The General Agreement on Tariffs and Trade (GATT) covers international trade in goods.

Goods can be imported into the EU under different trade regimes depending on the product and the country of origin. The main trade regime is the most-favoured nation (MFN) which applies, in principle, to all countries — it provides normal non-discriminatory tariffs charged on imports and excludes preferential tariffs under free trade agreements and other schemes or tariffs charged inside quotas. MFN tariffs are what countries promise to impose on imports from other members of the WTO, unless that partner country has a preferential trade agreement or preferential treatment, such as the Generalised System of Preferences (GSP) for developing countries or the EU’s Everything But Arms (EBA) programme. Virtually all countries in the world have joined at least one preferential trade agreement, under which they promise to give another country’s products lower tariffs than their MFN rate, for example, through a customs union or a free trade area, where the preferential tariff rate for essentially all products is zero.

Tariffs applied to the value of imports of selected partners

EU trade agreements enable European enterprises to compete more effectively and export more to countries and regions outside the EU; they also give better access to raw materials and vital components for importers residing within the EU, as well as a greater choice of products for consumers. Such trade agreements may also require partner governments to protect human rights, labour rights and the environment, for example, through tackling issues such as safety or gender equality in the workplace.

The EU benefits from being one of the most open economies in the world, as around 70 % of its imports enter the EU at zero tariff. Figure 1 presents information for 2021 on the share of EU imported goods that originated from selected partners and which were subjected to a range of different tariffs. 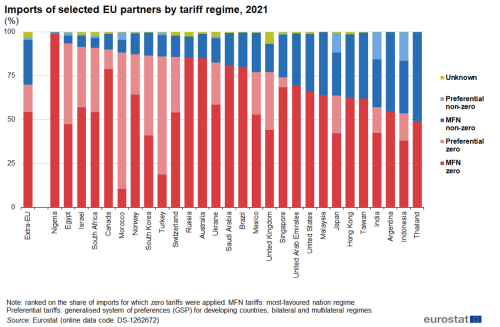 Tariffs applied to the value of imports by processing stage

The highest trade tariffs were applied on consumer goods

Alongside increased levels of international trade in goods, there has at the same time been a concerted reduction in tariffs. Figure 2 presents information for a world average, which shows that tariffs applied to imports of intermediate goods, capital goods and raw materials were particularly low, in contrast to tariffs for consumer goods which were more than twice as high. During the period from 2002 to 2017, average tariffs applied to imports were reduced approximately by half for each of the different processing stages. However, since 2017, with the exception of raw materials, tariffs increased somewhat, most notable was the increase of 2.0 percentage points (pp) for consumer goods. 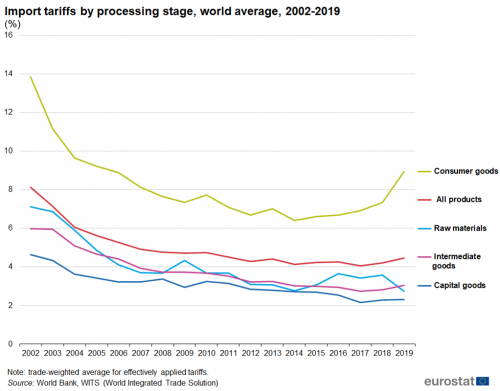 Tariffs on trade for goods

The EU is a customs union, operating a single, uniform trade and tariff policy. As part of this, the European Commission represents the EU Member States at WTO meetings and in negotiations for bilateral trade deals.

Although the emergence of globalised production chains has tended to strengthen the case for multilateral trade negotiations, the relatively limited progress made in recent years in this domain (the slow progress on the Doha Development Agenda) has led the EU to adopt a pragmatic approach. While continuing to actively participate in the WTO, the EU has also negotiated a number of bilateral trade agreements, which cover a broad range of issues, including trade in goods and services, intellectual property, investment, government procurement, access to energy and raw materials, environmental protection, working conditions, or regulatory cooperation.

Comprehensive negotiations have taken place, among others, with China, Japan, Singapore, South Korea and the United States, with varying degrees of success. In 2018 agreements were signed with Singapore and Japan and in 2019 with Vietnam. Negotiations for trade agreements with Australia and New Zealand have been launched in 2018. The EU-United Kingdom agreement was signed on 30 December 2020. The agreement entered into force on 1 May 2021 after approval of the European Parliament and adoption by the Council.

Figure 3 shows average tariffs that were applied globally in 2002 and 2019 to a more detailed list of selected products: there was a considerable reduction in the average tariff applied to all but one of these selected products during the period under consideration and by 2019 the average tariff applied was usually in single digits. The largest tariff reductions (in percentage terms) were recorded for vegetable (-9.3 pp), fuels (-7.8 pp) and transportation (-7.0 pp). Food products were the only group were tariffs increased by 18.2 pp. 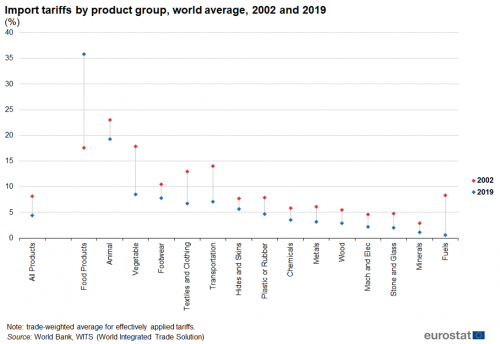