This article has been archived, for updated data, see article Agricultural production - crops. 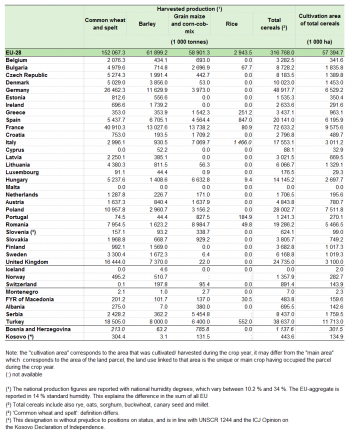 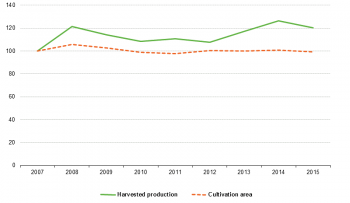 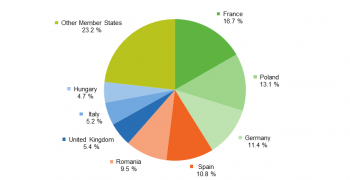 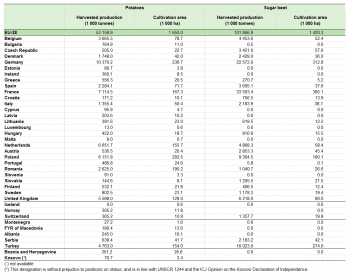 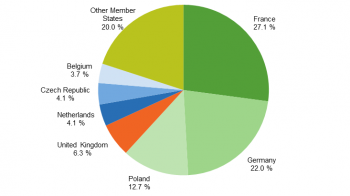 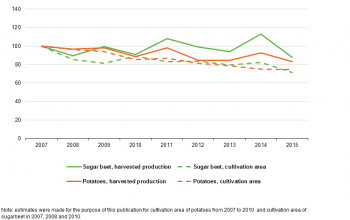 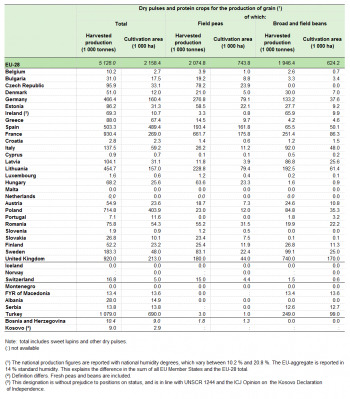 Table 3: Harvested production and cultivation area of dry pulses and protein crops for the production of grain, 2015
Source: Eurostat (apro_acs_a) 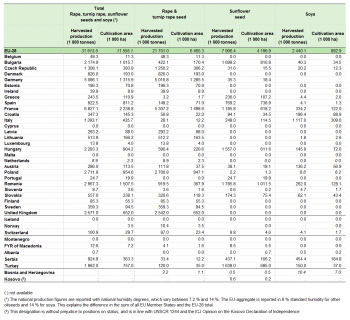 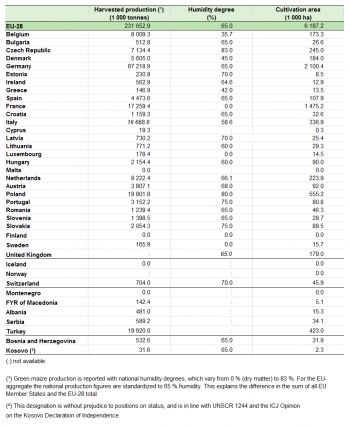 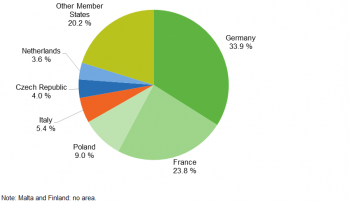 France and Germany were by far the largest cereal, sugar beet and oilseed producers in 2015, and together they accounted for more than half (55.1 %) of the EU-28’s sugar beet production, 37.3 % of oilseed production, 45.1 % of green maize production and 38.4 % of cereal production. The production of potatoes was more widely spread across the EU Member States, with Germany recording the highest production volume (19.5 % of the EU-28 total), while the United Kingdom, Poland, the Netherlands and France each accounted for between 10 % and 14 %. France, the United Kingdom and Poland were the leading producers of dry pulses and responsible for close to half (49.9 %) of thetotal EU-28 production.

The EU-28 total Utilised Agricultural Area (UAA) covered nearly 179 million hectares in 2015. While the largest part (59.8 %) consisted of arable land, close to one third was occupied by permanent grassland, and 6.6 % by permanent crops (see Figure 1).

In the Nordic Member States, almost the entire utilised agricultural area was taken up by arable land: 98.6 % in Finland, 89.2 % in Denmark and 85.0 % in Sweden. Conversely, the proportion of arable land in total utilised agricultural area in 2015 was below 50 % in six Member States: Austria (49.5 %), Luxembourg (47.9 %), Slovenia (35.9 %), the United Kingdom (33.6 %), Portugal (30.2%) and Ireland (10.2 %). These countries also had the highest shares (close to 50 % of the total UAA or more) of permanent grassland, explained by pedologic and climatic factors and high numbers of grazing animals. The highest proportion of grassland was reported in Ireland (89.7 % of the total UAA). For permanent crops, only three Member States reported a share higher than 20% of the total UAA: Greece (24.9 %), Cyprus (20.8 %) and Portugal (20.3 %) followed closely by Spain (19.8 %) and Italy (19.3 %). These high proportions are linked to suitable climatic conditions for growing permanent crops such as olive trees, vineyards and fruit trees.

In 2015, France, Germany, Poland and the United Kingdom produced 55 % of EU’s cereals

Only eight countries produced rice in the European Union due to challenging growing conditions and climatic prerequisites. Almost half (49.8 %) of total EU rice production in 2015 was reported by Italy, followed by Spain with 28.8 %.

When comparing the 2015 values with the 2007–14 average, the discrepancy between the increase in harvested production (+ 6.3 %) and the area cultivated with cereals (– 1.6 %) suggests a significant improvement in yield.

In 2015, the largest area of root crops (1.7 million hectares) was occupied by potatoes, closely followed by sugar beet (1.4 million hectares). Other root crops not classified elsewhere (e.g. fodder beet, fodder kale, rutabaga, fodder carrot, turnips, etc.) were of lesser importance. Thus, this section concentrates on potatoes and sugar beet only and offers an overview of selected statistics and indicators linked to their production in the EU-28.

Given the EU production quotas and increasing yields in the EU-28, the sugar beet area was reduced by 28.4 % between 2007 and 2015 (see Figure 5). Compared to the 2007–14 average the 2015 production area was 16.4 % smaller. In spite of this area reduction, production decreased by only 11.4 %. However there were large fluctuations in sugar beet production due to the Common Market Organisation (CMO) 2006 reform, followed by the restructuring of the sugar beet sector, which will lead to the end of quota management in September 2017.

France is the largest EU producer of dry pulses

Dry pulses and protein crops for the production of grain are crops sown and harvested mainly for their protein content and include in particular field peas, broad and field beans, sweet lupins as well as other dry pulses such as dry beans, chick peas, lentils, vetches, etc. These crops are used mostly in animal feed.

Dry pulses were grown on 2.2 million hectares (2.1 % of total arable land) and their production reached 5.1 million tonnes in the EU-28 in 2015. The harvested production of field peas and broad field beans was 2.1 million and 1.9 million tonnes, respectively. Production and area of dry pulses differed considerably between the Member States.

Spain and Poland accounted for more than two fifth of the total EU area of dry pulses in 2015 with over 0.5 million hectares.

A fifth of the total EU oilseed production in France alone

Main oilseeds, rape and turnip rape, sunflower seed and soybeans, were grown on 11.6 million hectares across the EU Member States in 2015 (10.8 % of the total arable land), as shown in Table 4. Considered together, these main oilseed crops covered 97.4 % of the total EU oilseed area in 2015. Oilseeds are essentially used to provide vegetable oil, which is used in the food industry and in producing biodiesel. They are also used as an important protein-rich animal feed ingredient.

The production of soya increased by 183.2 % from 2007 to 2015, and the 2015 harvest more than doubled if compared to the 2007–14 average (108.9 %). The biggest increases occurred especially in the last two years. Italy, France, Croatia and Hungary were among the countries with the largest increases both in harvested tonnes and in cultivated hectares of soya.

In 2015, Germany was the EU-28’s leading producer of green maize

Plants harvested green are arable crops intended for animal feed, or for renewable energy. They are grown in rotation with other plants and include green maize, other cereals, leguminous plants and temporary grasses.

This section concentrates on green maize only and aims to give an overview of the selected statistics and indicators linked to its production in the EU-28.

Green maize was harvested from almost 6.2 million hectares in the EU-28 in 2015 (see Table 5). The area increased by 0.7 million hectares (+13.4 %) if compared with 2010 area and by 6.1 % if compared to the average of the values registered between 2010 and 2014. The production amounted to 232 million tonnes, nearly 32 million tonnes more than in 2010 (+16 %), but it corresponded to a 4.2 % decrease compared with the 2010–14 average (see Figure 7). Natural conditions and both production and consumption behaviour resulted in varied production patterns across the individual Member States.

Germany was the EU-28’s leading producer of green maize with more than one third of total production (slightly over 87 million tonnes harvested from about 2.1 million hectares in 2015). Germany and four other Member States (France, Poland, Italy and the Czech Republic), together accounted for over three quarters of total EU-28 green maize area (see Figure 8).

Statistics on crop products are obtained from sample surveys, administrative data and estimates based on expert observations. The sources vary from one EU Member State to another because of national conditions and statistical practices. National statistical institutes or Ministries of Agriculture are responsible for data collection in accordance with EU Regulations. The finalised data sent to Eurostat are as harmonised as possible. Eurostat is responsible for establishing EU aggregates.

This article gives an overview of European crop production, based on data provided to Eurostat by the EU-28 Member States under Regulation (EC) No 543/2009 and Regulation (EU) No 1557/2015 concerning crop statistics.

The term ‘crop’ covers a very broad range of cultivated plants. Within each type of crop there can also be considerable diversity in terms of genetic and phenotypic (physical or biochemical) characteristics. The range and variety of crops grown across the European Union (EU) reflects their heritable traits as well as the ability of plant breeders to harness those traits to best respond to the myriad of topographic and climatic conditions, pests and diseases.

The statistics on crop production in this article are shown at an aggregated level and have been selected from over 100 different crop products for which official statistics are collected.