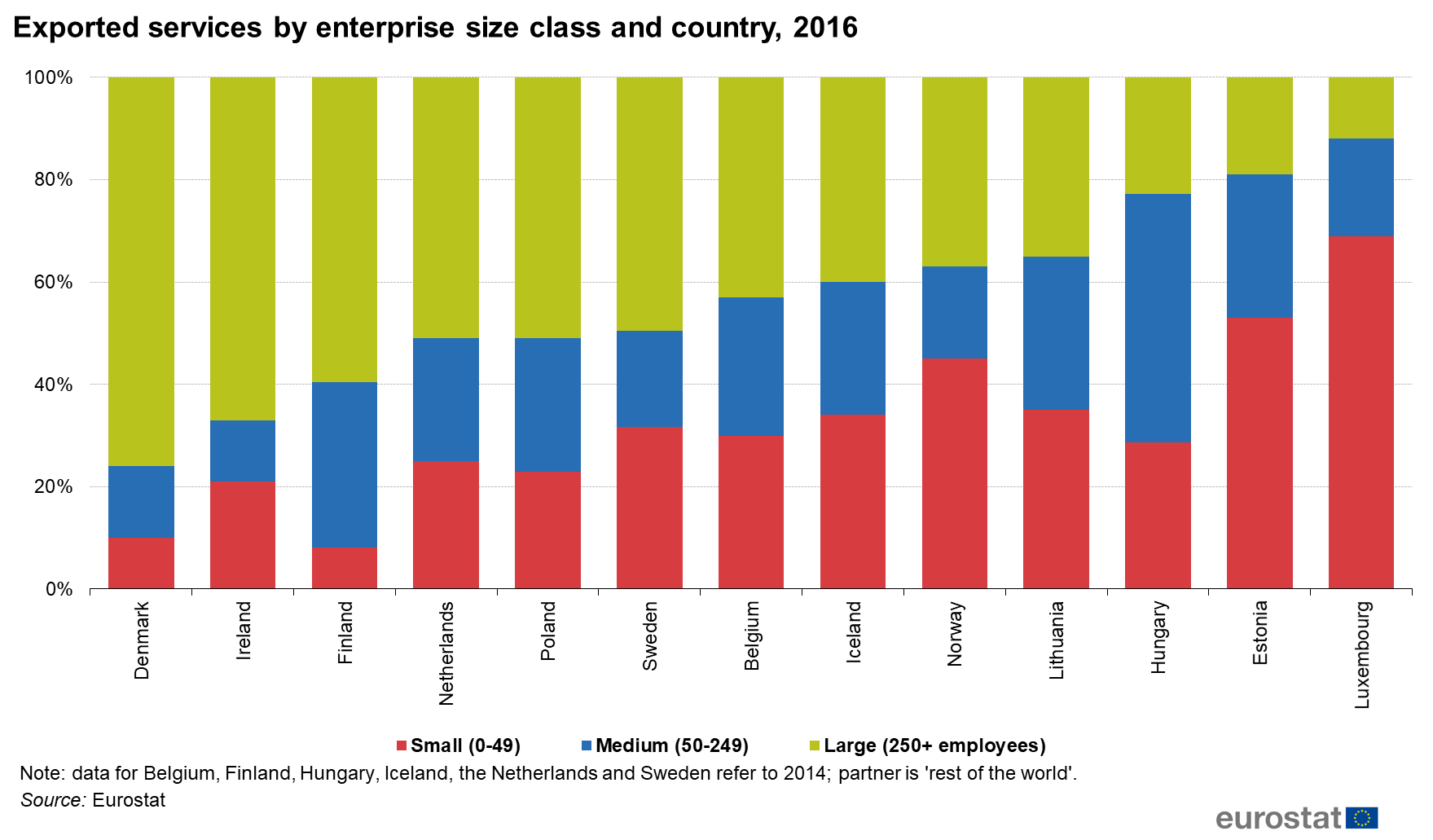 Which enterprises engage in international trade in services and what are their business characteristics? How is this eco-system structured? Even more crucially, what information is available at EU level? This article describes how enterprises trading in services operate, by analysing enterprise-level data and examining in detail the statistics of the characteristics of such enterprises: size (the number of employees), ownership (foreign-controlled or domestic) and economic activity of the enterprise trading in services. A study looking at services trade by enterprise characteristics (STEC) was recently carried out in 13 European countries, the experimental statistical results of which are set out in this analysis.

A study looking at services trade by enterprise characteristics (STEC) was recently carried out in 13 European countries. This analysis sets out the results of the study, which are based on 2014 and 2016 data[1]. For all the statistics used, the trading partner is the ‘rest of the world’ (i.e. any other country). Due to the limited scope of the study, the conclusions are descriptive and cannot be generalised beyond the participating countries.

Increasing international trade in services is an important component and key driver of economic globalisation. Many services have become tradable due to digitalisation, such as health and educational services. Also, many new services have been launched on international markets by means of information and communication technologies (ICT) and digital tools — and some have led to the creation of new markets.

There are some clear differences between the countries covered by the study in terms of how the enterprises[2] have responded to globalisation. As regards international trade in services, Luxembourg and Ireland are more open to international markets than the other countries: typically, foreign owned affiliates enjoy a strong position in their markets and account for the biggest part of the exported services. In contrast, domestic service providers have a strong position in Denmark, Iceland and Lithuania, accounting for around three quarters of the services exports.

In many countries, export intensity[3] is highest in transport and storage, followed by professional, scientific and technical activities.

Together, STEC and trade in goods by enterprise characteristics (TEC) statistics provide a picture of the traders active in international goods and services markets. This is illustrated with an example later in this article.

Trade in services by enterprise size

Smaller enterprises (less than 250 employees) were responsible for the biggest proportion of services exports in Luxembourg (88 %), Estonia (81 %) and Hungary (78 %). They made a much smaller contribution in larger economies such as Ireland (33 %), Denmark (24 %) and Finland (40 %). By size of the enterprise, there are also clear differences across Nordic countries: large (and often multinational) enterprises have a much larger market share in Finland (59 %) and Sweden (50 %) than in Norway (37 %) (Figure 1)[4].

The pattern of imports of services shares similarities with the former one of exports. In Ireland, Denmark and Finland, large enterprises are responsible for a very high percentage (85 %, 74 % and 66 % respectively) of services imports (Figure 2). Smaller enterprises were responsible for the biggest proportion of imports in Norway (85 %), Luxembourg (82 %), Hungary (82 %) and Lithuania (76 %). 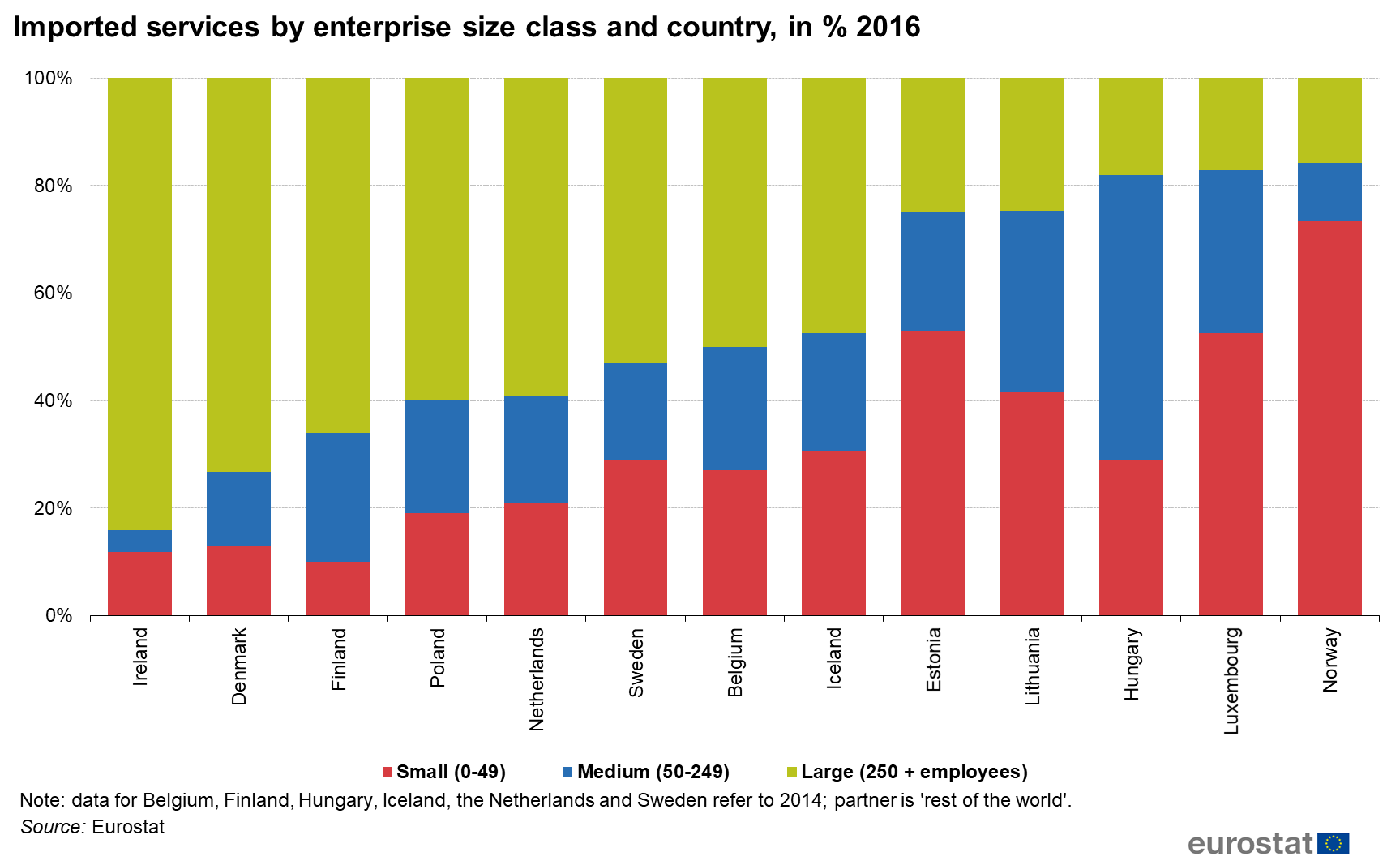 Figure 2: Imported services by enterprise size class and country, in %, 2016

The relationship between enterprise size and the nature of the services that they export (crossing the ‘number of employees’ and ‘type of service’ variables) can also be analysed. Figure 3 takes the case of Poland as an illustration. There is some variation across the types of service, but on average, small and medium sized enterprises account for almost half of the Polish services exports. Research and development services are exported mainly (70 %) by large enterprises, while exports of transport are dominated by small and medium enterprises.

Trade in services by enterprise ownership

The type of ownership indicates whether an enterprise is domestically or foreign controlled. A high proportion of foreign controlled services traders is an indication that the economy in question is well integrated in international markets and global value chains. Typically, this is reflected by foreign affiliates enjoying a strong position in trade in services.

Figure 4: Exported services by enterprise ownership and country, in %, 2016 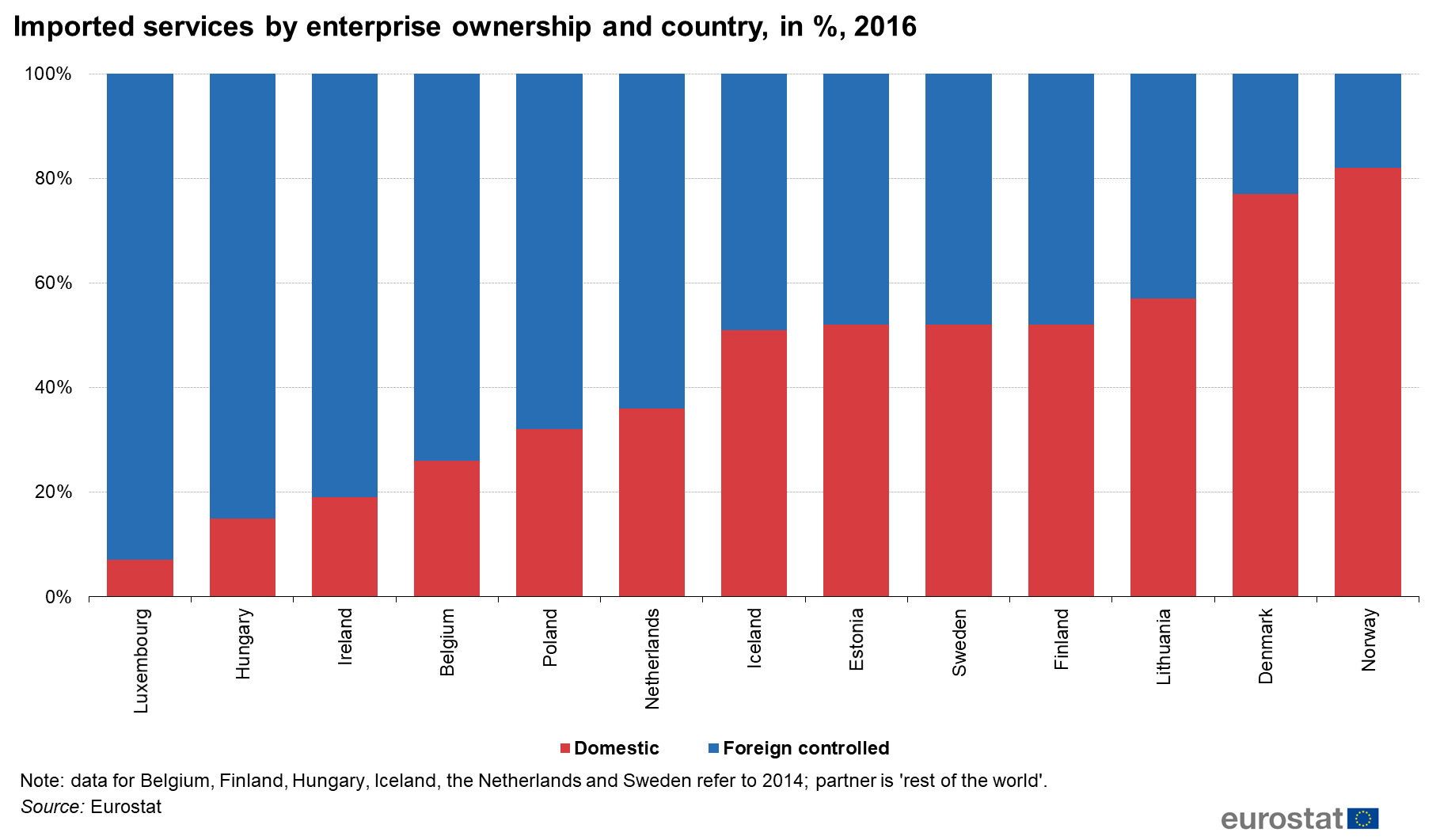 Figure 5: Imported services by enterprise ownership and country, in %, 2016

Smaller services traders tend to be domestically controlled, while large traders are more likely to be foreign controlled (multinationals).

Figure 6 shows the positive correlation (r=0.26) between the value of services exported from a country by small traders and by domestic traders. Luxembourg is an exception: small traders there are more often foreign controlled[5]. 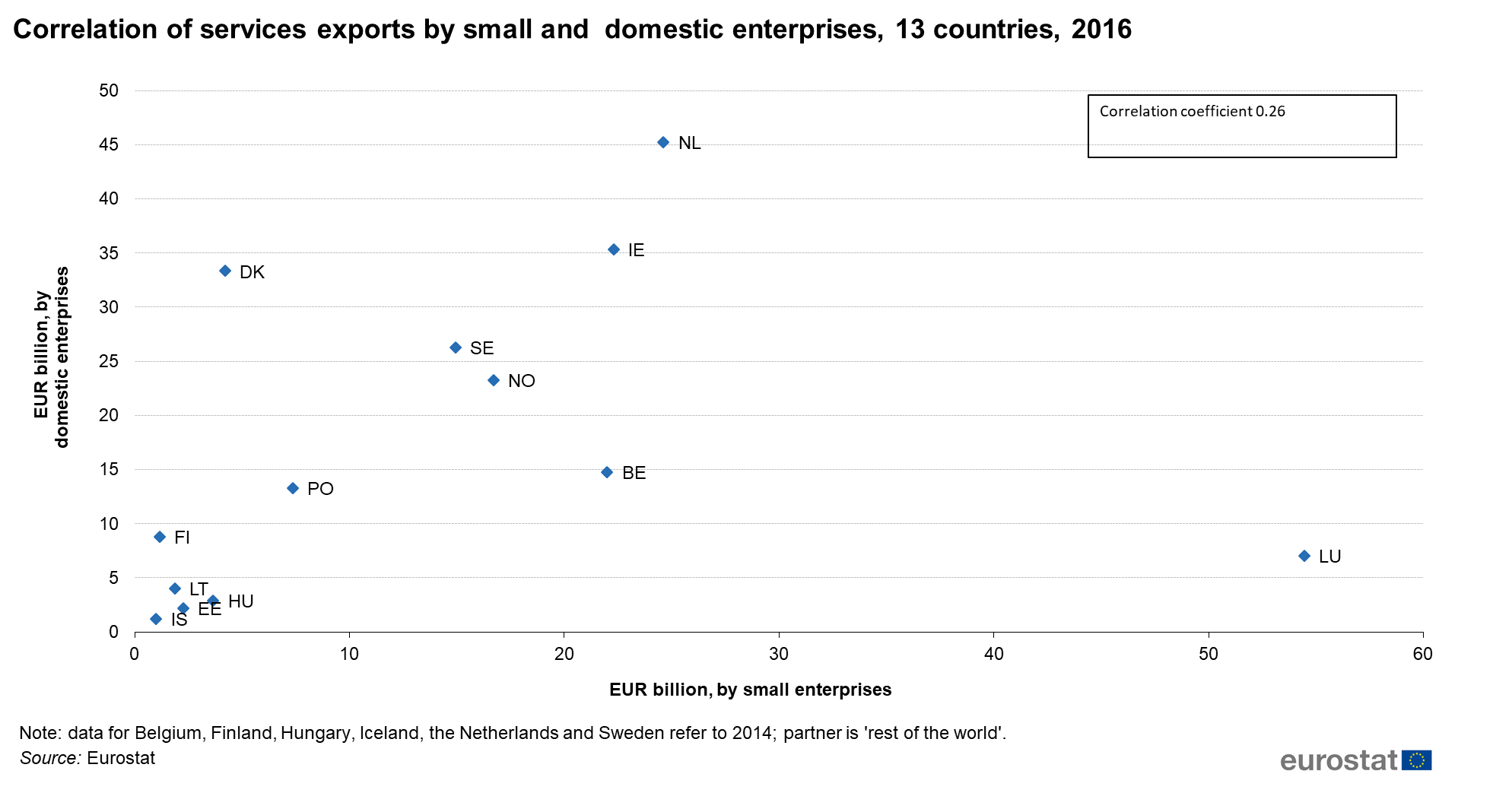 Traders in transport and storage activities tend to export the biggest volumes of services, followed by those in manufacturing.

Traders’ economic activity indicates their main field of operation. Enterprises in some activities (e.g. manufacturing) export mainly goods, while others (NACE Sections H-N) are mostly involved in services. Figure 7 shows the proportions of services exports attributable to enterprises in different activities[6], as defined by their main economic activity. Transport and storage enterprises are responsible for over half of the services exports from Lithuania, and for the biggest proportion from Denmark, Iceland, Estonia and Hungary. Traders in the information and communication sector were responsible for almost half of the services exports from Ireland. In the Netherlands, Sweden and Belgium a large proportion of services traders operate in the field of professional, scientific and technical activities. 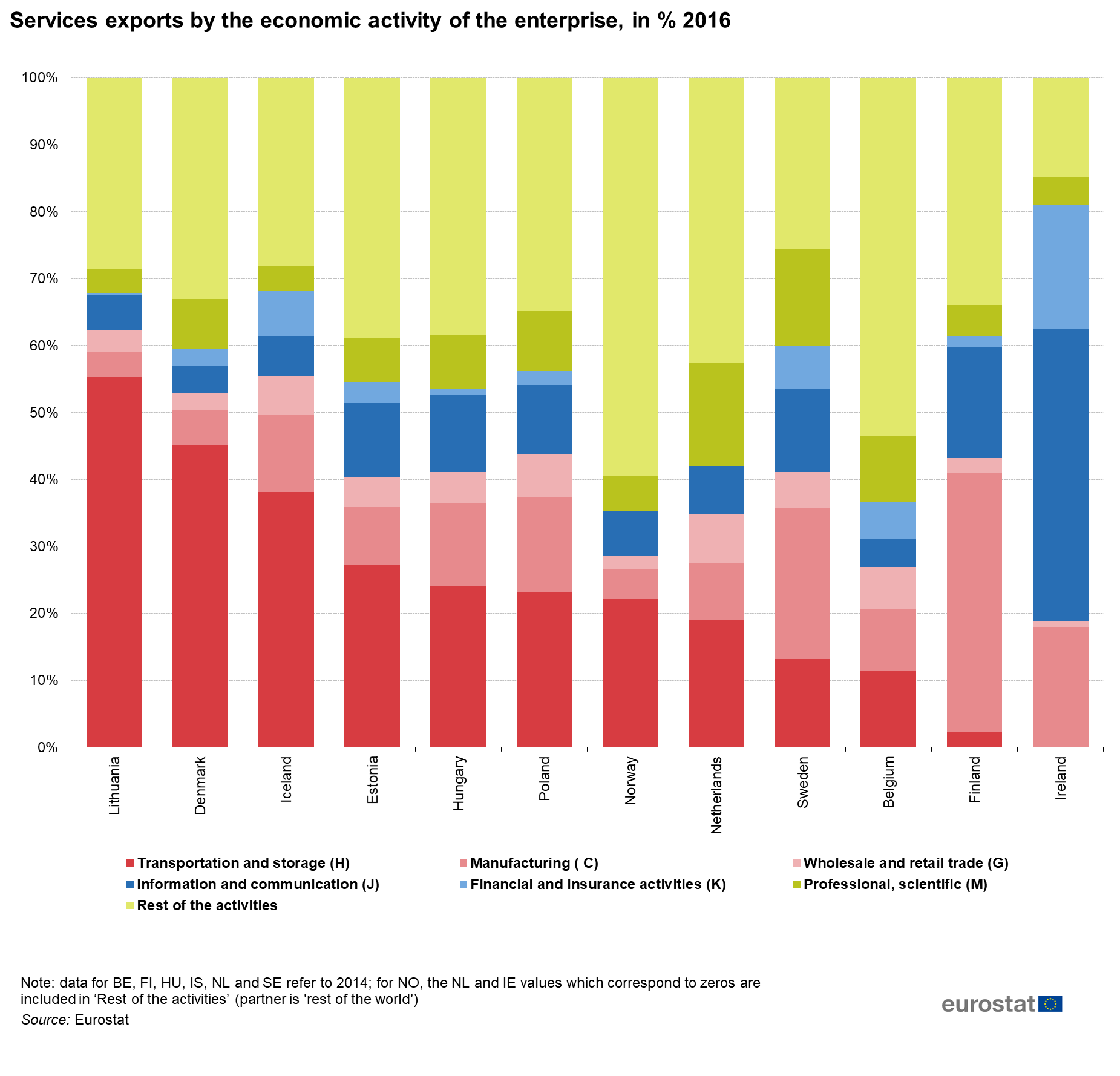 Figure 7: Services exports by the economic activity of the enterprise, in % 2016

STEC statistics focus on traders in services, similarly as goods traders are covered by ‘trade in goods by enterprise characteristics’ (TEC) statistics. With the globalisation of international trade and enterprises exporting goods and services together, the TEC and STEC approaches need to be combined to get a comprehensive overview of traders in both goods and services. In the case of Lithuania (Figure 8), traders export mainly goods in industrial activities and services in the rest. The proportion of goods was highest in exports in the water supply, sewerage (E), manufacturing (C), wholesale and retail trade (G) and electricity and gas(D) sectors. Services dominated exports in education (P), transport and storage (H) and information and communication (J) activities. Trade in goods is primarily located in goods producing activities, while services trade is carried out mainly by enterprises classified as being engaged in services activities with the only exception in wholesale and retail trade, which is classified as a services activity but exports predominantly goods. 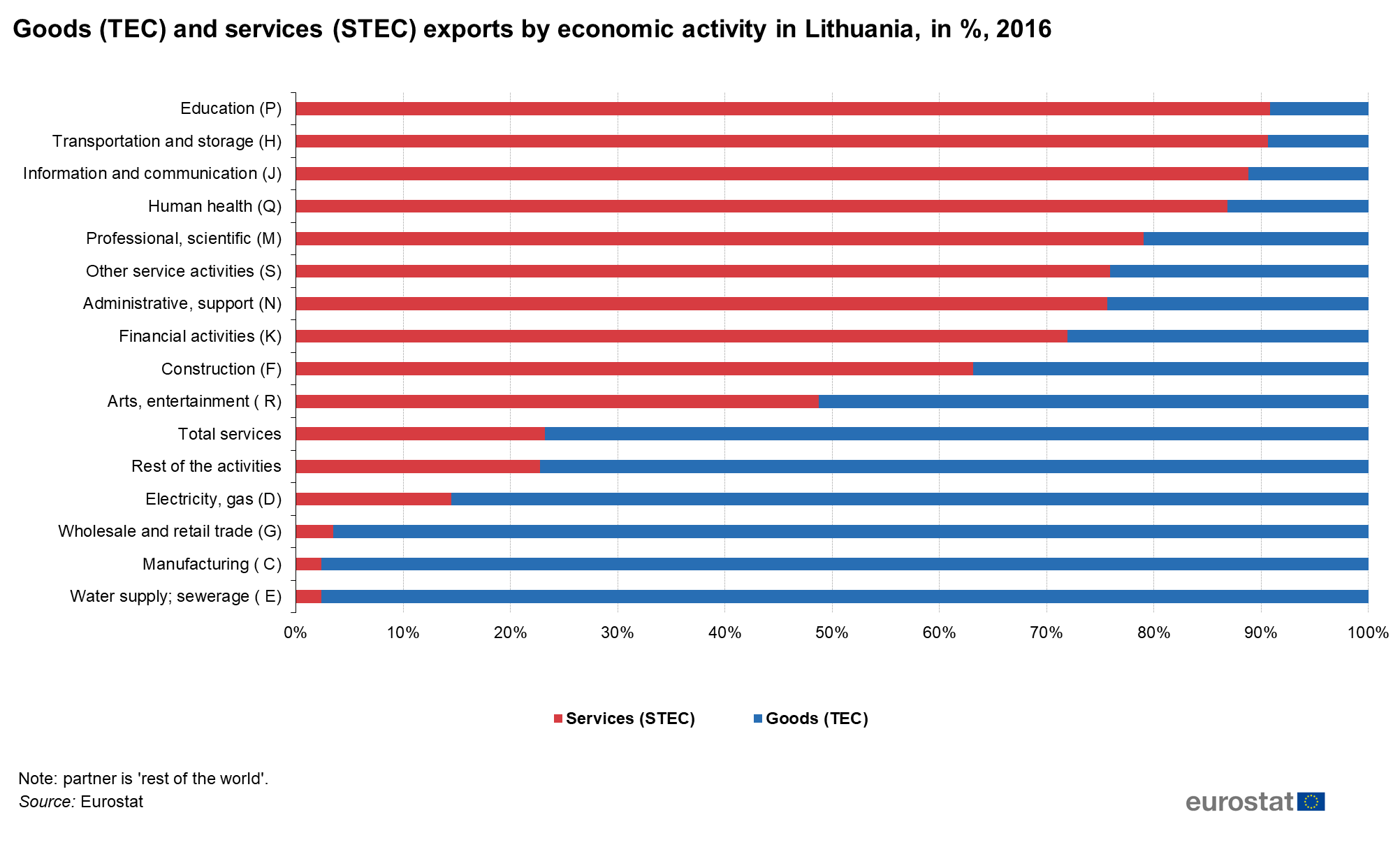 Figure 8: Goods (TEC) and services (STEC) exports by economic activity in Lithuania, in % 2016

Services exports intensity is relatively high among transport and storage enterprises and lower (between 1 % and 6 %) among wholesale and retail trade enterprises.

Exports intensity is expressed as the share of exports in total turnover. It is an indication of whether traders are more open to globalisation (high export intensity) or more involved in local markets (low export intensity).

In transport services, export intensity varies widely, from 3.7 % to 3.9 % in Sweden, Ireland and the Netherlands to 63.2 % in Luxembourg, 57.2 % in Iceland and 56.0 % in Lithuania (Figure 9). In wholesale and retail trade, enterprises sell services primarily for domestic markets, leading to export intensity of only 0.1 % to 5.8 %.

For better comparability, the ‘unknown’ part was removed from the analysis. This includes travel and some financial services, which cannot be linked with the business register due to different data collection methodologies (travellers’ data, administrative sources, etc.). The total services breakdown (including the non-matched share) is presented in Annexes 1 and 2. 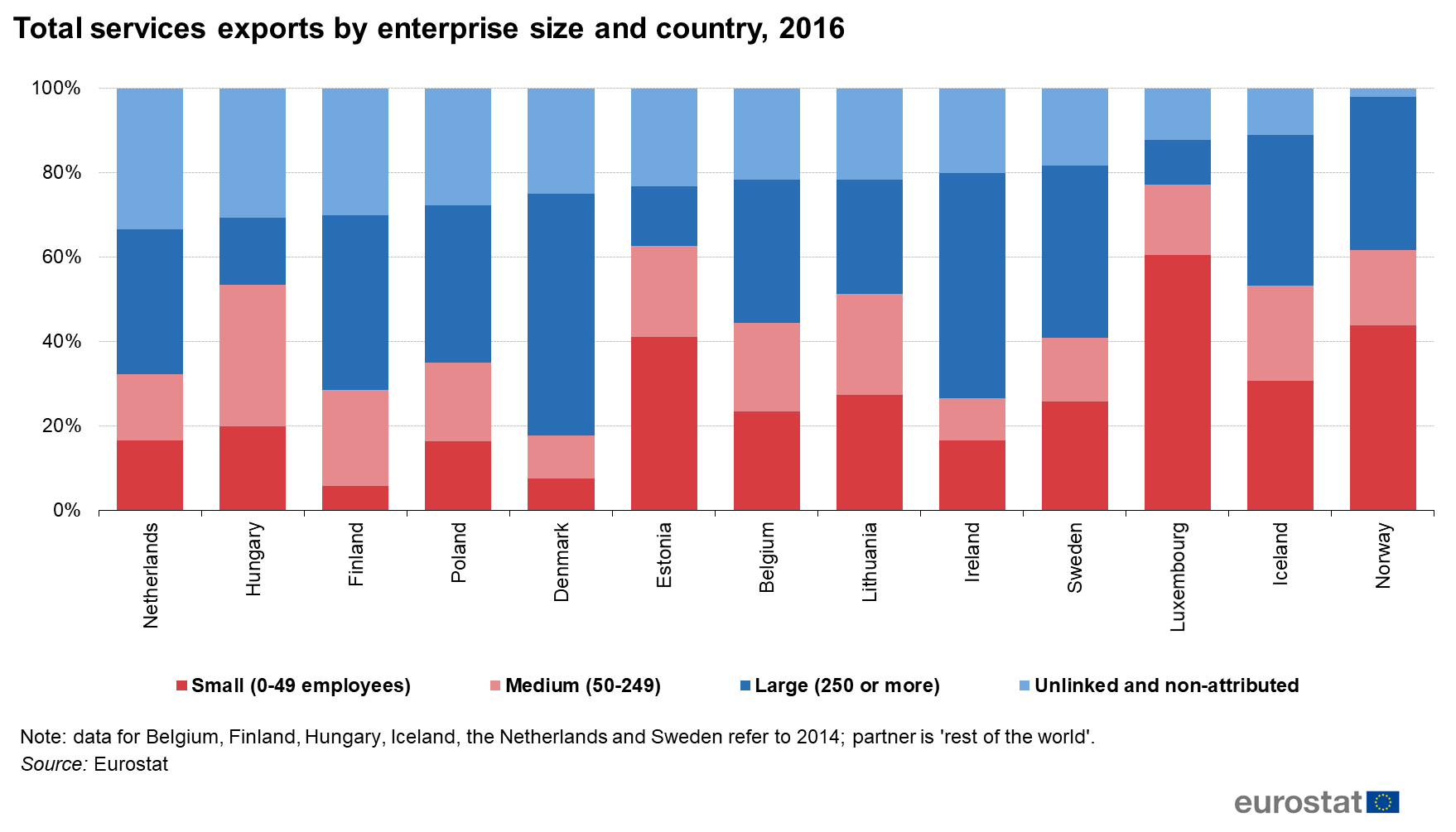 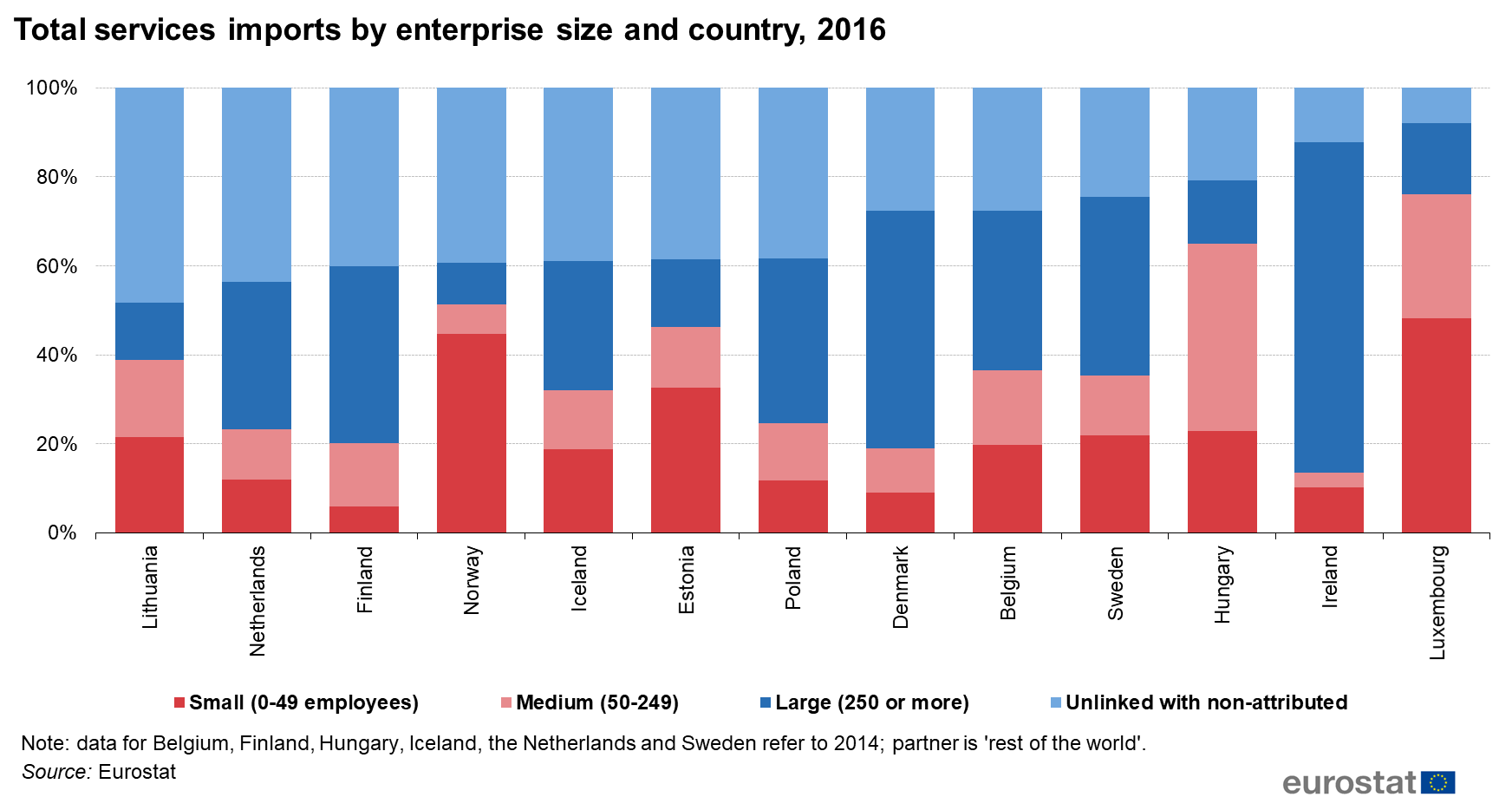 The development of STEC statistics represents a major step forward in integrating services trade data into business statistics. STEC statistics make the link between the volume of trade in services and the characteristics of the enterprises involved. They provide information on particular types of enterprises, broken down by enterprise size, the economic activity in which they operate and their ownership (domestically or foreign-controlled).

STEC data are produced by combining statistical business register information with data on international trade in services at enterprise level. This enables us to link data on the value of each enterprise’s exports and imports to its characteristics, as provided in the business register. The resulting dataset provides a breakdown of the trader population according to size (small, medium and large), type of ownership and category of main economic activity. Linking different datasets adds value to data, without increasing the collection burden on enterprises and at limited cost to data compilers.

Statistics on international trade in services currently provide the monetary value of trade in services, broken down by category (e.g. computer or legal services) and partner country. These are produced from the transactions recorded under countries’ balance of payments, which captures all transactions that take place between residents and non-residents. By linking the two datasets (business register and services trade data from the balance of payments) at enterprise level using a common identifier (the enterprise’s register code), we can create a cross classification providing us with new data on enterprises involved in services trade.

STEC statistics provide users with new indicators on traders operating in the international services market. They give us additional insight into trade statistics, by allowing the profiling of the enterprises according to selected characteristics such as number of employees, type of ownership and economic activity.

International trade in services statistics offer a picture of services flows between countries, broken down by type of service. While this constitutes important input for trade analyses, such data do not tell us anything at micro level about the enterprises that actually trade in services. The profiling of traders is crucial if we are to gain an understanding of the incentives and consequences of services trade at micro (enterprise) level to complement the big picture provided by traditional services trade statistics.

The development of STEC statistics has been endorsed by the European Statistical System Committee. The main organisations active in this area at international level (including Eurostat, the UN, the OECD, the World Trade Organisation and the United Nations Conference on Trade and Development) have produced a paper, International trade information system in 2020: a vision for the future, in which they call for an integrated approach to statistics on trade in goods and services and on enterprises and multinationals.