In 2018, about 520 000 people worked in the forestry and logging sector in the EU, with Poland recording the largest workforce of about 73 300 people. 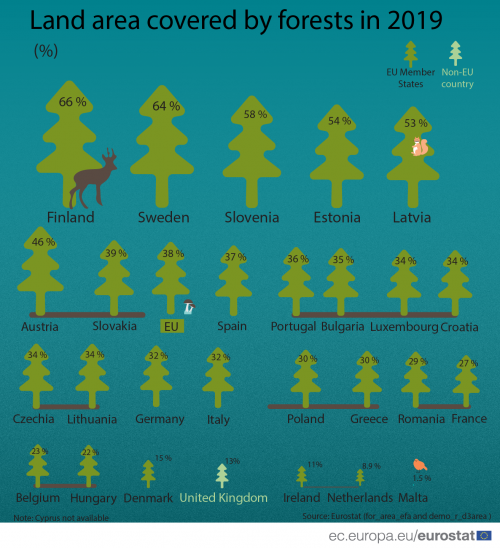 This article is part of a set of statistical articles that the Eurostat online publication "Agriculture, forestry and fishery statistics" is based on. It presents statistics on forestry and logging in the European Union (EU).

The European Union (EU) accounts for approximately 5 % of the world’s forests and, contrary to what is happening in many other parts of the world, the forested area of the EU is slowly increasing. European forests are an important factor in mitigating climate change. Socio-economically, forests vary from small family holdings to state forests or to large estates owned by companies, but they also provide a wide range of ecosystem services, most of which are not recorded by economic accounts and statistics, such as carbon sequestration, protection of soil from erosion or providing opportunities for recreation. This article provides data on the EU's forest area and timber resources as well as economic and employment figures of the forestry sector. Indicators combining both the physical and the economic data are presented.

Forests in the the EU

In 2019, the EU-27 had an estimated 159 million hectares of forests (excluding other wooded land) and their area has increased by almost 10 % since 1990. Forest area increased in all EU-27 countries with the exception of Slovenia and Sweden, where a small decrease by <0.5 % was reported, and Portugal, where forest area decreased by 3 % in the period of 1990–2019. The largest increase took place in Ireland (69 %), Spain (34 %) and Malta (31%); however, in two of these countries forest covers only a small share of land, as shown in Figure 1. Of countries where forests cover the larger part of the national territory (i.e. >50 %), Estonia and Latvia reported a relatively large increase in forest area of 11 % and 7 % respectively in 1990–2019. On the other hand, data for the Netherlands show a combination of one of the smallest relative sizes of forest area and one of the smallest increases in its area among EU countries in the reported time period (Figure 1). 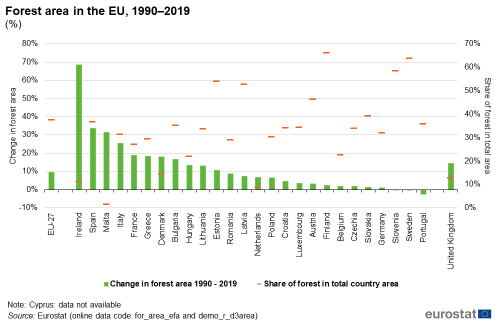 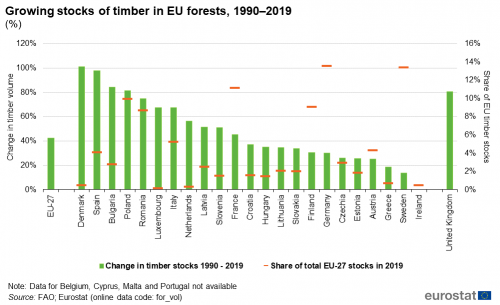 Economic indicators for forestry and logging 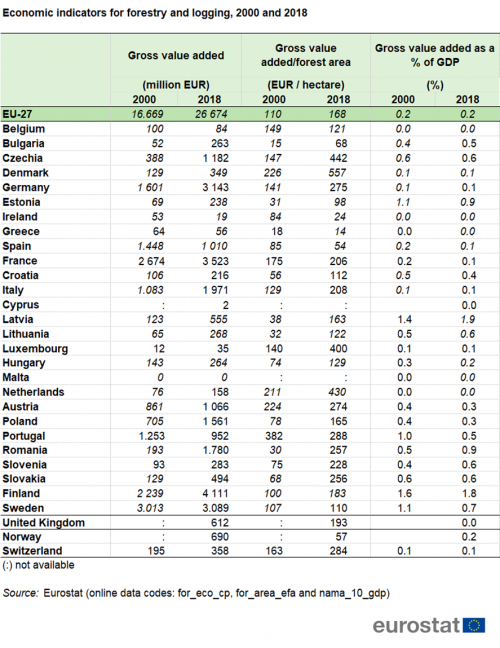 Gross value added of forestry and logging industry represented 0.2 % of the GDP of EU-27 in 2018, i.e. it accounted for an equal share of GDP as in 2000. The economic importance of forestry and logging, expressed as the share of GVA generated by the industry in the total GDP of the country, was greatest in Latvia and Finland where it reached 1.9 % and 1.8 % GDP respectively and showed an increase compared to 2000 in both countries.

On average, forests of EU-27 countries generated 168 EUR/ha of GVA in 2018. The largest GVA per forest area was generated in Denmark, Czechia, and the Netherlands in 2018. While this indicator may be affected by the type of activities performed by the forestry and logging sector, it may be used as a proxy of economic productivity of forestry activities across the EU (see Table 1 and Figure 3). 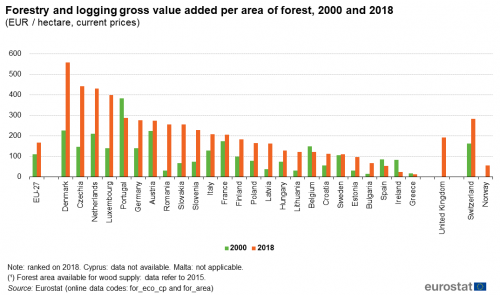 The output of forestry comprises several activities; however, two dominate for most countries – wood in the rough (i.e. felled trees removed from the forest) and net annual increment (i.e. the growth of standing trees in managed forests, or in other words, forests available for wood supply) (Figure 4). According to the rules of National accounts, the growth of trees in managed forests is considered to be an output of economic activity and, as a result, it is included in the total output of the industry. In 2018, available data suggest that the output of wood in the rough (logs) was highest in Germany, Sweden and France with 4 736, 4 323 and 2 827 million euro respectively. The net increment of forest trees in managed forests was highest in Sweden (EUR 3 424 million), followed by Germany (EUR 2 808 million) and France (EUR 2 637 million). On the other hand, the output of non-wood forest products ranged from EUR 332 million in Portugal (the main producer of cork in the world), EUR 242 million in Poland and EUR 186 million in Czechia to EUR 0.6 million in Bulgaria. The category "Other", which includes services, secondary activities and other products, showed the highest output in France (EUR 1 427 million) followed by Germany (EUR 1 213 million) and Sweden (EUR 1 034 million). 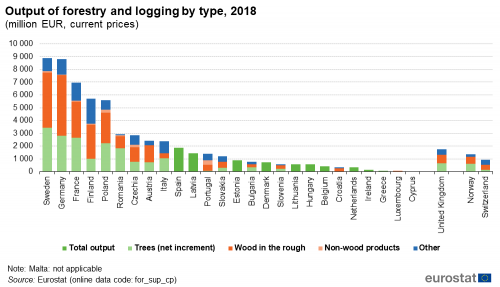 Employment and apparent labour productivity in forestry and logging

Table 2 provides information on employment and apparent labour productivity within the EU’s forestry and logging sector, based on National Accounts employment data. In the EU-27, about 519 400 persons worked in the forestry and logging sector in 2018, which represented a decrease of 2 % compared to year 2000. The largest workforce was recorded in Poland, with 73 300 persons, Romania (51 800), Sweden (40 000) and Germany (39 000). 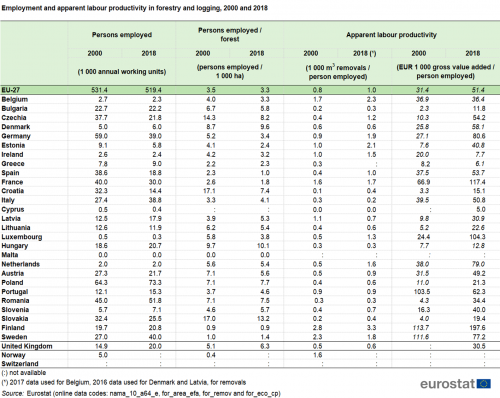 The ratio of labour input per area of forest gives an indication of the labour intensity of the sector across the EU Member States. This indicator varies considerably between countries, ranging from abound 13.2 employed persons per 1 000 hectares in Slovakia to <2 persons per 1 000 hectares in Finland, Spain Sweden and France (see Table 2 and Figure 5). Some of the differences across EU Member States may also reflect differences in management practices, the density of the growing stocks, the tree species and the terrain. 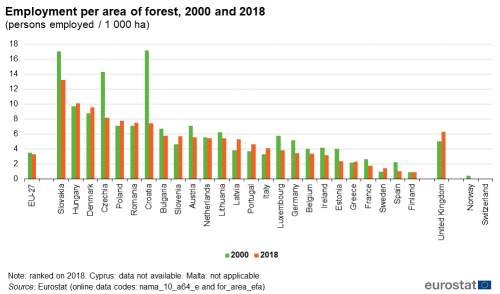 Eurostat, the Timber Committee of the United Nations Economic Commission for Europe (UNECE), Forestry Section of the United Nations Food and Agriculture Organisation (FAO) and the International Tropical Timber Organisation (ITTO) collect and collate statistics on the production and trade of wood through their Joint Forest Sector Questionnaire (JFSQ). Each partner collects data from a different part of the world; Eurostat is responsible for the data collection exercise pertaining to the EU Member States and EFTA countries.

The JFSQ provides data for supply balances of timber used for wood products and for energy, and for estimating the carbon contained in harvested wood products.

The collection of forest accounts re-started in 2008 after a break of several years, As in the 1990s, it was known as Integrated Environmental and Economic Accounting for Forests (IEEAF). In 2016, the questionnaire was reviewed and adapted to new needs, such as timber from all sources for material use, energy and the bio-economy, while continuing the time series on the economic viability of forestry and employment. The questionnaire was re-named European Forest Accounts (EFA). Note that the monetary values concern current basic prices (in other words, the analysis of time series is not adjusted for inflation).

A broad array of EU policies and initiatives has a bearing on forests. For several decades, environmental forest functions have attracted increasing attention — for example, in relation to the protection of biodiversity and, more recently, in the context of climate change impacts and energy policies. Apart from the traditional production of wood and other forest-based products, forests are increasingly valued for their environmental role and as a public amenity.

The European Commission presented a EU forest strategy (COM(2013) 659) for forests and the forest-based sector in 2013, in response to the increasing demands put on forests and to significant societal and political changes that have affected forests over the last decades. Currently, a new forest strategy is being negotiated and it has been foreseen to be adopted in 2021.