All or nearly all (99-100 %) primary school pupils in Cyprus, Malta, Austria and Spain learnt English as a foreign language in 2017.

In 2017, 95 % of pupils in upper secondary education in the EU were learning English as a foreign language.

In upper secondary general education, less than one fifth of all pupils in Ireland, Portugal and Greece were learning two or more foreign languages in 2017. 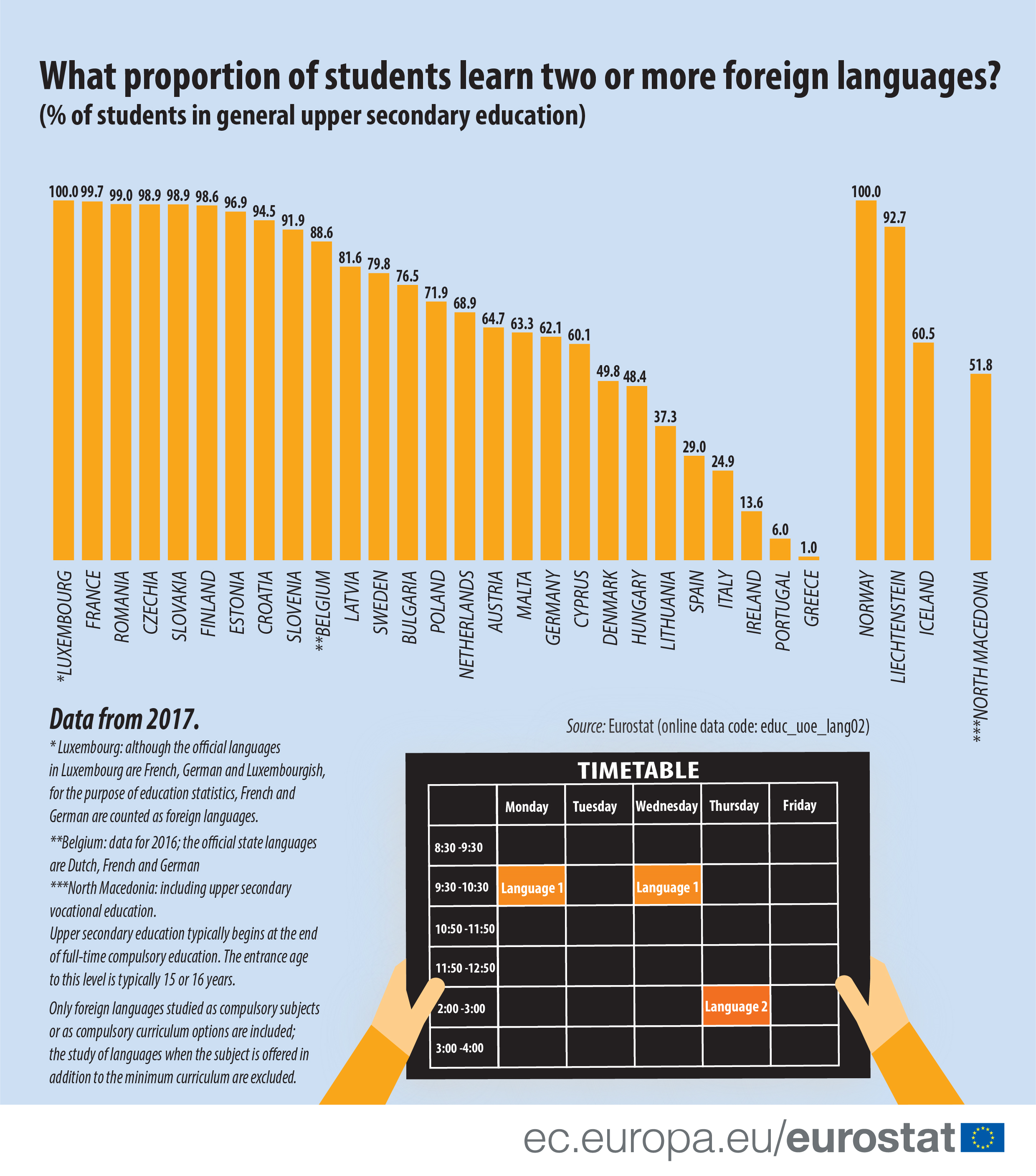 School and other educational institutions provide the main opportunity for the vast majority of people to learn languages, while linguistic diversity is actively encouraged within many further education establishments and workplaces. This article presents statistics on language learning in primary and secondary schools of the European Union’s (EU’s) Member States as well as in EFTA and candidate countries and forms part of an online publication on education and training in the EU.

Currently there are 24 official languages recognised within the EU which has been the situation since the accession of Croatia. In 1958, legislation specified German, French, Italian and Dutch as the official and working languages of the EU’s predecessor, the European Communities.

There have always been fewer official languages than EU Member States, as some EU Member States share common languages, for example in Belgium where the official languages are Dutch, French and German, while in Cyprus the majority of the population speaks Greek. There are also a number of indigenous regional and minority languages (such as Catalan, Galician and Basque in Spain, or Welsh and Scottish Gaelic in the United Kingdom) found within the EU, as well as many other languages that have been brought into the EU by migrant populations, notably Arabic, Turkish, Urdu, Hindi and Chinese. Some regional languages, such as Catalan and Welsh, have gained a status as co-official languages of the EU and the official use of such languages can be authorised on the basis of an administrative arrangement concluded between the Council and the requesting Member State.

Within primary education, a clear majority of pupils learn English in the vast majority of EU Member States. Indeed, learning English is mandatory within secondary education institutions in several Member States, and so a number of them have close to 100 % of pupils learning this language already in primary education, as shown in Figure 1. All or nearly all (99-100 %) primary school pupils in Cyprus, Malta, Austria and Spain learnt English as a foreign language in 2017, as was also the case in Liechtenstein, Norway and North Macedonia. In addition, more than 9 out of every 10 primary school children learnt English in Greece, Latvia, Poland, Italy, France and Croatia. Note that the relative importance of English as a foreign language may be further magnified because pupils tend to receive more instruction in their first foreign language than they do for any subsequent languages they study.

Many of the eastern and northern European Member States that joined the EU in 2004 or 2007 were characterised by the fact that learning Russian was compulsory in the past. This situation has changed rapidly and in most of these countries there has been a marked increase in the proportion of pupils learning English — by 2017 this share often exceeded 50 % of all primary school pupils. In Estonia, Lithuania, Bulgaria, Czechia, Slovenia, Slovakia and Romania it was between 70 % and 86 % in 2017, rising to more than 90 % in Poland and Latvia (as noted above), as it also was in Croatia which joined the EU in 2013.

Luxembourg is also of particular interest, insofar as there are three official languages, with most pupils receiving instruction in Luxembourgish, German and French in primary education; English is only introduced at secondary school. A similar situation used to be observed in Belgium, with the focus in primary schools often on learning French or Dutch (depending on the community and/or region), however an increasing share of Belgian primary school pupils now study English as a foreign language. 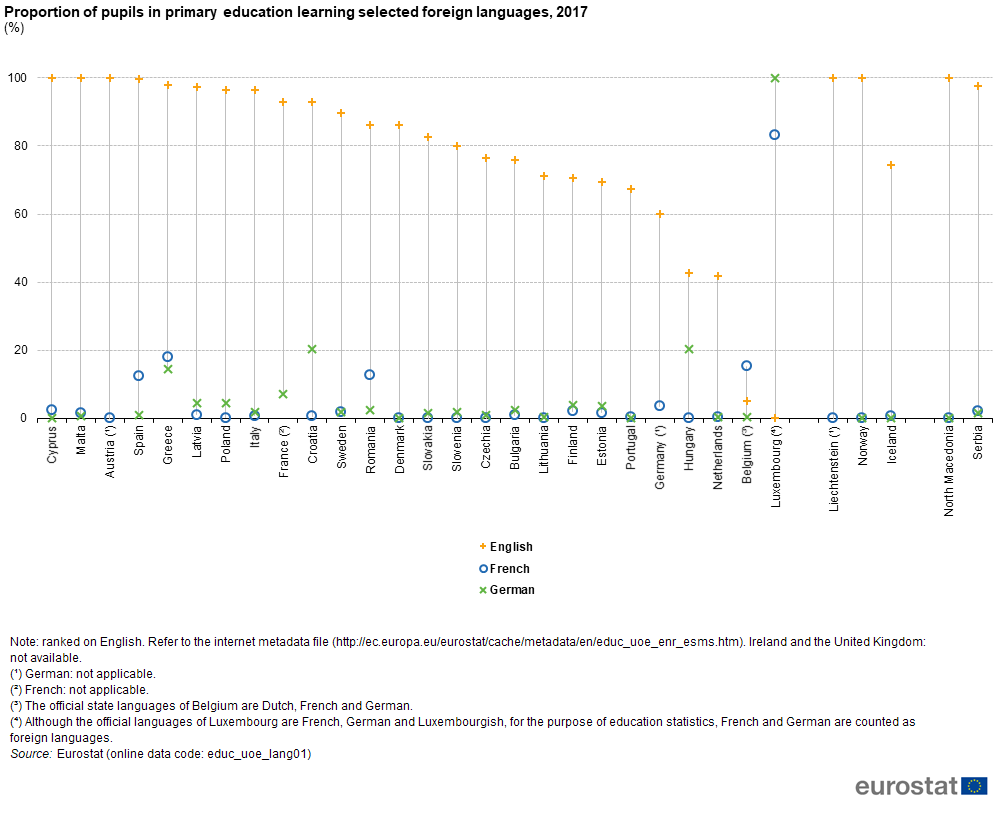 Turning to language learning in upper secondary general education (ISCED level 3); as shown in Infographic 2, almost all — 94.7 % across the EU-28 (including 2016 data for Belgium; excluding the United Kingdom) — students at this level were studying English as a foreign language in 2017, compared with slightly more than one fifth (22.3 %) studying Spanish, while less than one fifth were studying French (18.1 %) or German (17.4 %).

Infographic 2: Which are the foreign languages studied most commonly?
(% of pupils in upper secondary general education)
Source: Eurostat (educ_uoe_lang01)

Between 2012 and 2017, the share of pupils in upper secondary general education learning French as a foreign language fell in all but seven of the 26 EU Member States for which data are available (no data available for the United Kingdom; France, not applicable). The only exceptions were Estonia, Croatia, Poland, Greece and Belgium (2011-2017) where there was a slight increase in the share, as well as Ireland and Spain where the proportion of pupils studying French rose at a somewhat faster pace.

The picture was more mixed in relation to the share of pupils studying German, as this proportion increased in 13 out of the 25 EU Member States for which data are available (no data available for the United Kingdom; Germany and Austria, not applicable); the biggest increases in percentage point terms were recorded in Greece, Malta (both up by 2.8 percentage points) and Ireland (with an increase of 5.4 percentage points).

The final part of Table 1 provides a similar set of information in relation to the share of pupils studying Spanish. Among the 26 EU Member States for which data are available (no data available for the United Kingdom; Spain, not applicable), the share of pupils learning Spanish increased in 17, fell in six and was unchanged in three; the highest increases were recorded in Italy, Poland and France. 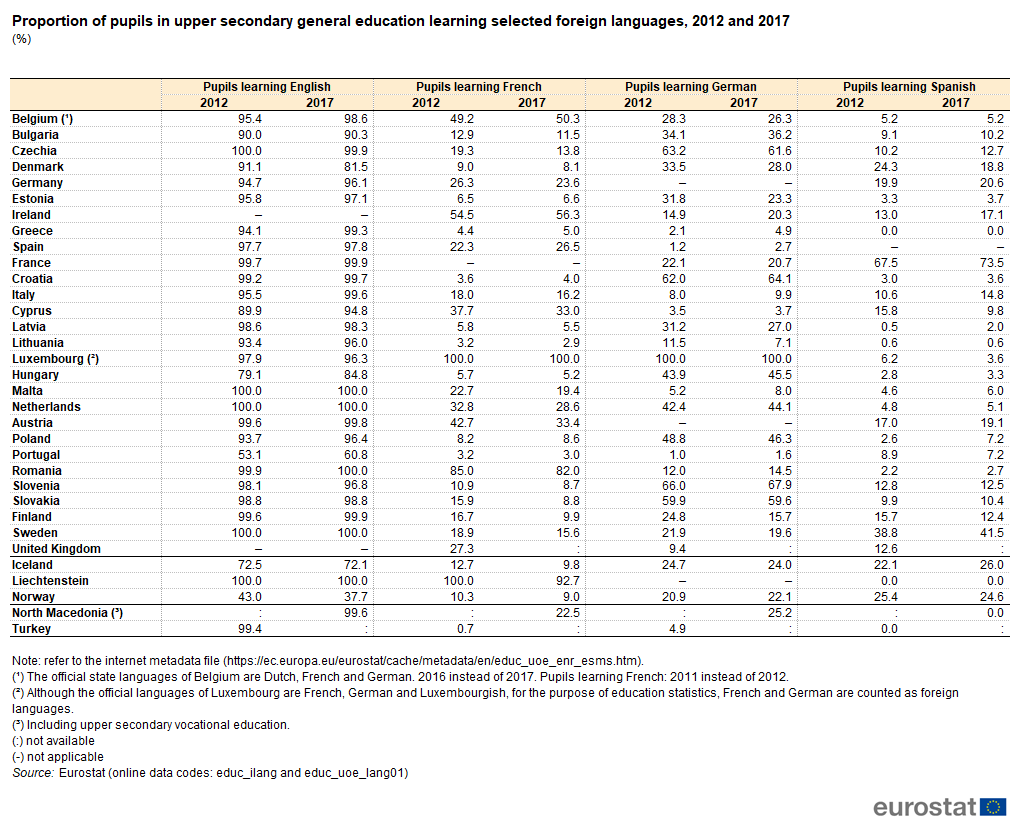 In 2017, Luxembourg was the only EU Member State where every pupil in upper secondary general education was learning two or more foreign languages; however, very high shares (98.6-99.7 %) were also recorded in France, Romania, Czechia, Slovakia and Finland; note this indicator includes all foreign languages, not just the selected languages shown in Table 1. Ireland (13.6 %), Portugal (6.0 %) and Greece (1.0 %) recorded by far the lowest shares of students in upper secondary general education learning two or more foreign languages; this was also the case in the United Kingdom in 2012 (4.4 % in 2012; no recent data available). 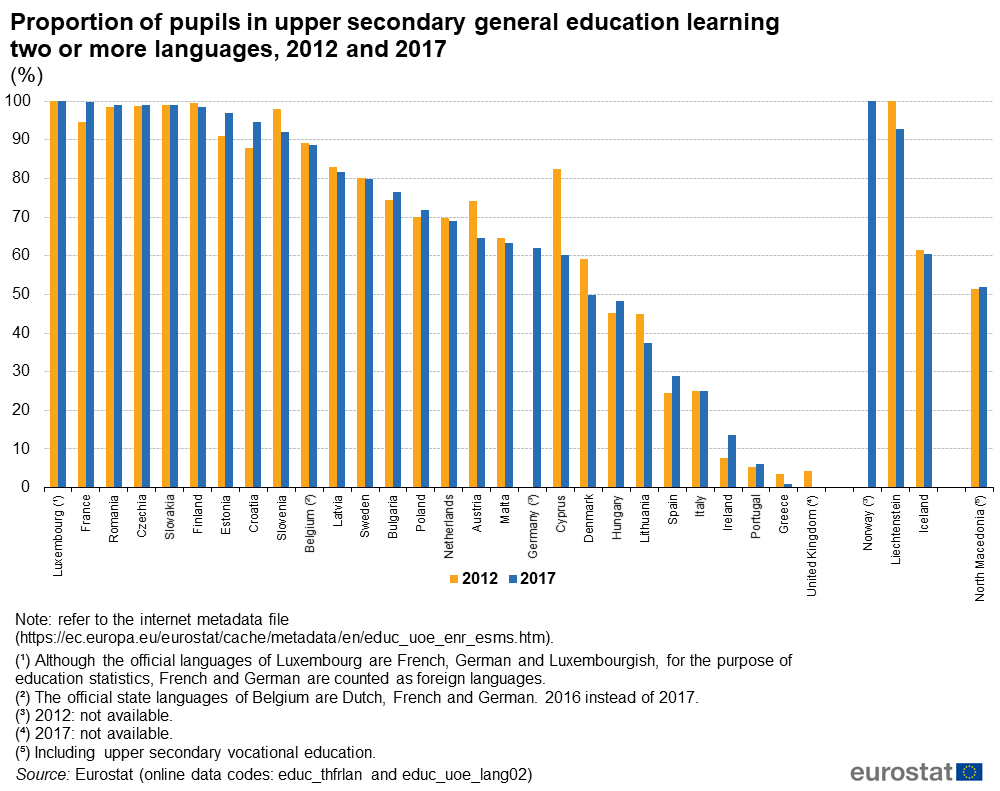 The data refer to all pupils in primary and secondary education, even if teaching languages does not start in the first years of instruction for the particular ISCED level considered. The data refer to all modern spoken living languages that are thaught as foreign languages. Each student studying a foreign language is counted once for each language he or she is studying, in other words students studying more than one language are counted as many times as the number of languages studied.

Foreign languages are essential for European citizens who would like to move, work, and study across the EU (and beyond). Learning a foreign language is also considered as an important factor for participation in European society as languages can unite people, render other countries and their cultures accessible, and strengthen intercultural understanding. Within business, poor or low levels of language skills can cause companies to lose international contracts, while potentially hindering the mobility of skills and talent.

For several decades it has been mandatory for most European children to learn at least one foreign language during their compulsory education. In 2002, the Barcelona European Council recommended that at least two foreign languages should be taught to all pupils from a very early age. This recommendation has been implemented to varying degrees, usually for compulsory secondary education, either by making it mandatory to teach a second language, or ensuring that pupils have the possibility to study a second foreign language as part of their curriculum.

In September 2008, the European Commission adopted a Communication titled ‘Multilingualism: an asset for Europe and a shared commitment’ (COM(2008) 566 final), which was followed in November 2008 by a Council Resolution on a European strategy for multilingualism (2008/C 320/01).

Language skills are at the heart of the ambitious vision to create a European Education Area. The European Commission made a set of proposals for a comprehensive approach to the teaching and learning of languages, aiming to:

A Council Recommendation on a comprehensive approach to the teaching and learning of languages was adopted by education ministers at a Council meeting in May 2019, while a European Commission staff working document (SWD(2018) 174 final) provides some scientific and factual background to the Recommendation.