Farms and farmland in the European Union - statistics

Highlights
Tweet
There were 10.5 million agricultural holdings in the EU in 2016, two-thirds of which were less than 5 ha in size.
Tweet
EU farms used 173 million hectares of land for agricultural production in 2016, 39 % of the total land area of the EU.
Tweet
The number of farms in the EU has been in steep decline, but the amount of land used for production has remained steady. 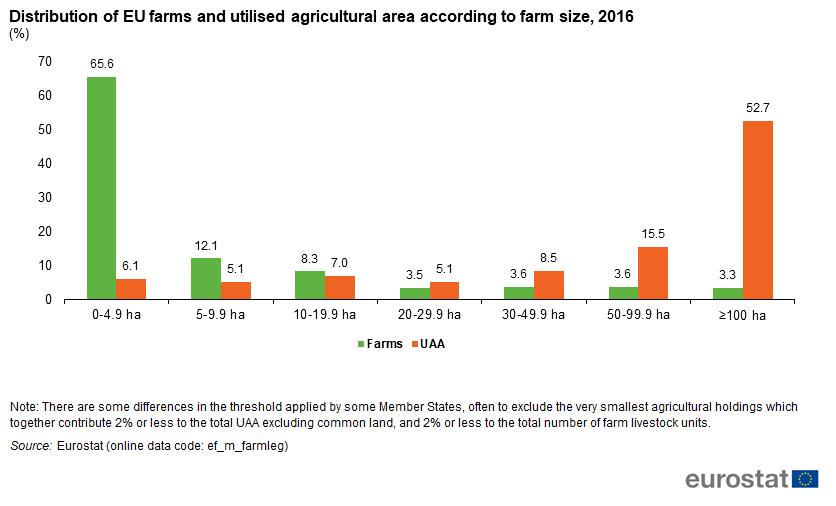 This article is part of a set that is taken from Eurostat’s publication Agriculture, forestry and fishery statistics - 2018 edition. The EU's farms are numerous and varied; they are of all sizes, varied in terms of what is grown or animals that are reared, run under different management structures and found in areas that have different geologies, topographies and climates.

There were 10.5 million agricultural holdings in the EU in 2016

The vast majority of the EU's farms are family farms

The overwhelming majority (96.0 % in 2016) of the EU's farms are classed as being family farms [1]. Indeed, more than nine in every ten farms (93.0 %) in the EU only had family workers (the farmer and his/her family members) in 2016. Family farms were the dominant farm type in all Member States. However, France had a relatively sizeable minority of non-family farms (27.3 % of its close to 0.5 million farms) along with Estonia (21.0 %).

Most of the EU's farms are small in nature

Two-thirds of the EU's farms were less than 5 hectares (ha) in size in 2016 (see Figure 1). These small farms can play an important role in reducing the risk of rural poverty, providing additional income and food. At the other end of the production scale, 6.9 % of the EU's farms were of 50 ha or more in size and worked two-thirds (68.2 %) of the EU's utilised agricultural area (UAA). So although the average mean size of an agricultural holding in the EU was 16.6 ha in 2016, only about 15 % of farms were this size or larger.

This distribution pattern was particularly clear in Romania, the Member State with the highest number of farms; nine in every ten farms (91.8 % or 3.1 million farms) were smaller than 5 ha, but the 0.5% of farms of 50 ha or more in size farmed one half (51.1 %) of all the UAA in the country. Small farms of under 5 ha were also typical in Malta (96.5 % of the total), Cyprus (89.6 %), Bulgaria (82.6 %), Hungary (81.4 %), Greece (77.3 %), Portugal (71.5 %) and Croatia (69.5 %), as well as in particular regions of others such as the southern parts of Poland and coastal regions of Spain and Italy. The number of small farms in certain Member States and regions reflects a mixture of crop specialisation (such as small olive groves and vineyards), of wide land ownership, and geological and topographical constraints.

EU farms can be characterised in three distinct size groups

Broadly-speaking, there are three distinct groups of farms in the EU: (i) semi-subsistence farms, where the focus is on growing a high proportion of food to feed farmers and their families (ii) small and medium-sized farms that are generally family-run businesses and (ii) large agricultural enterprises which are more likely to have a legal form or be cooperatives.

These distinctions are made clearer by analysing farms in terms of their economic size. Of the EU's 10.5 million farms, 4.0 million had a standard output below EUR 2 000 per year and were responsible for only 1% of the EU's total agricultural economic output. These very small farms are at the (semi-)subsistence end of the farming scale; about three-quarters of such farms in the EU consumed more than one half of their production.

In contrast, 304 000 farms (2.9 % of the EU total) each produced a standard output of EUR 250 000 per year or more in 2016 and were responsible for a majority (55.6%) of the EU's total agricultural economic output; these farms can be characterised as being large agricultural enterprises. Two in every five of these large farms had a legal or group holding form. 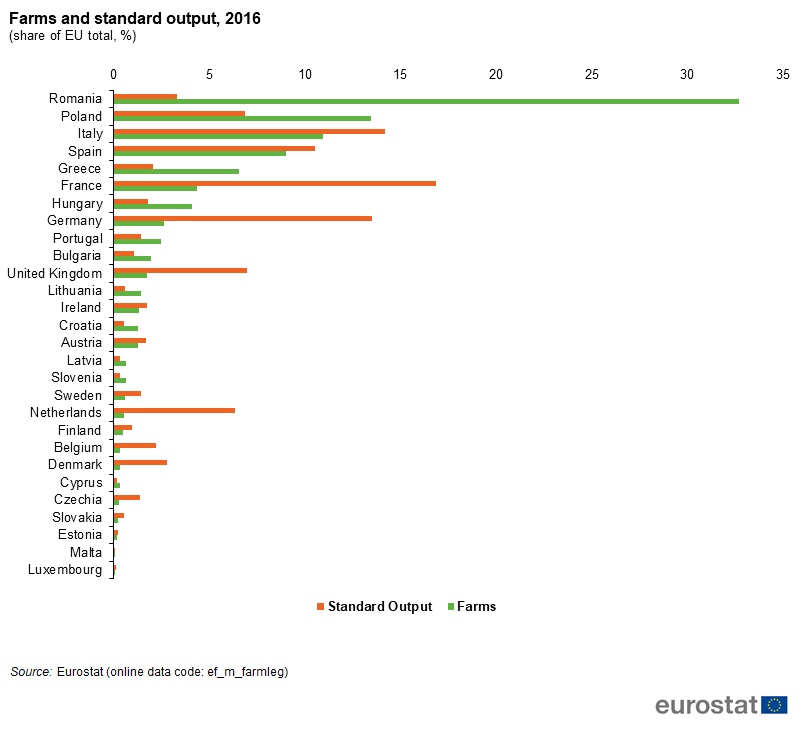 The diversity of farm types can be shown according to what is grown or reared, based on whether there is a single dominant activity or not. A farm is considered to be specialised when a particular activity provides at least two-thirds of the production or the business size of an agricultural holding. Others have a mix of activities in which no one activity dominates.

Some farms are specialised in crop production, whether that be where field crop activities are the dominant activity, or where permanent crops (like apples, grapes and olives) dominate, or indeed horticultural activities. Some farms are specialised in animal production and animal products, whether that be where grazing livestock or granivores (such as pigs and poultry) dominate. Other farms have a mix of crops, mix of livestock, or mix of crops and livestock.

Another one quarter (25.1 %) of the EU's farms were specialist livestock farms, with sheep, goats and other grazing livestock farms (6.2 %) and specialist dairy farms (5.4 %) the most numerous within this group. Mixed farms made up most of the rest (21.1 %), with a small percentage of farms not being classifiable. 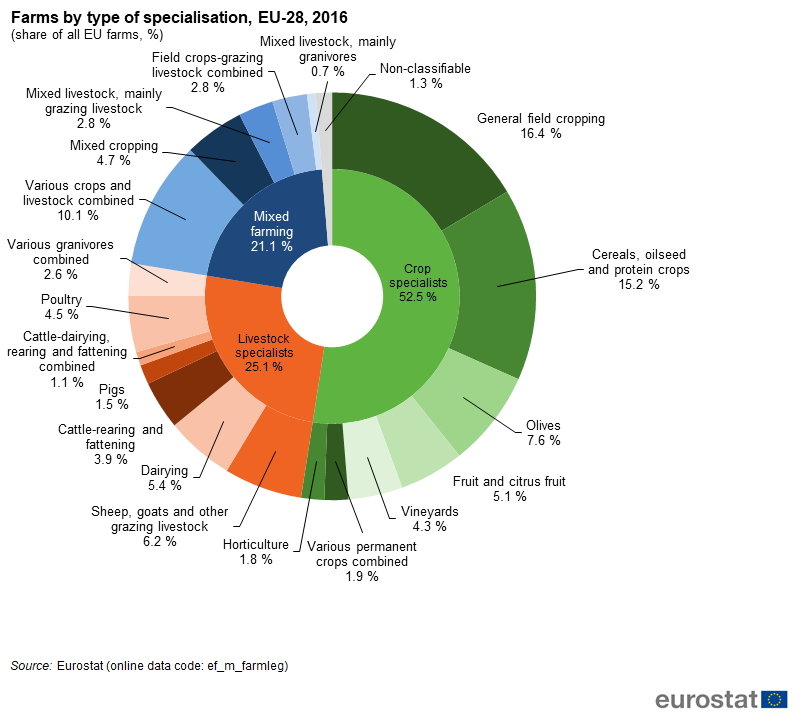 Farms in the EU managed two-fifths (38.8 %) of the total land area of the EU as UAA, as well as wooded areas (6.2 %) and other farm land not used for agriculture (2.1 %). Agricultural landscapes dominated the countryside in some Member States; about two-thirds of the land area in Ireland (70.0 %) and the United Kingdom (65.7%) was used as agricultural land and the share was also particularly high in Denmark (60.9 %). This was in stark contrast to Finland (6.5 %) and Sweden (6.9 %) where forest dominated the landscape. These two Nordic Member States were the only EU Member States where wooded areas belonging to agricultural holdings accounted for a higher share of the land area than that used for agricultural purposes. 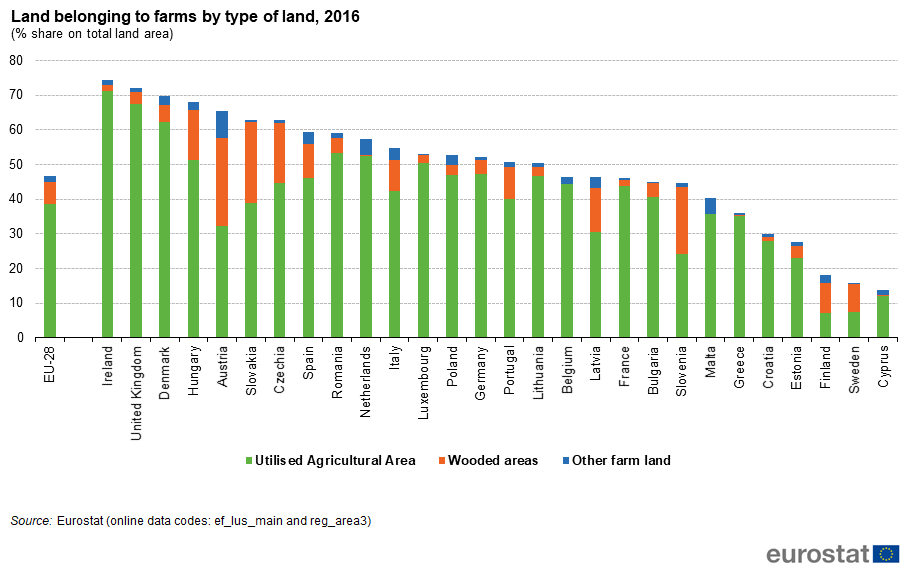 The number of farms in the EU has been in decline for a long time. However, putting a precise figure on farm losses should be treated with some caution, as coverage has decreased in some countries with the raising of the size threshold for what is considered a farm. This means that figures in time series analysis of farm numbers, types of farms and characteristics of the labour force should be seen as indicative rather than precise[3].

Bearing this precaution in mind, the number of farms in the EU decreased by about one quarter in the relatively short period between 2005 and 2016. This suggests losses of up to 4.2 million farms across the Member States, the vast majority of which (about 85 %) were small farms of a size under 5 ha. During this period, the largest reductions in farm numbers were recorded in Poland (an indicative loss of 1.1 million farms, or 43 %), Romania (an indicative decline of 0.8 million farms, or 20 %) and Italy (an indicative 0.6 million farms, or 34 %). All Member States, with the notable exception of Ireland, recorded falls in farm numbers. In proportional terms, the steepest declines of almost two-thirds were in Slovakia and Bulgaria. 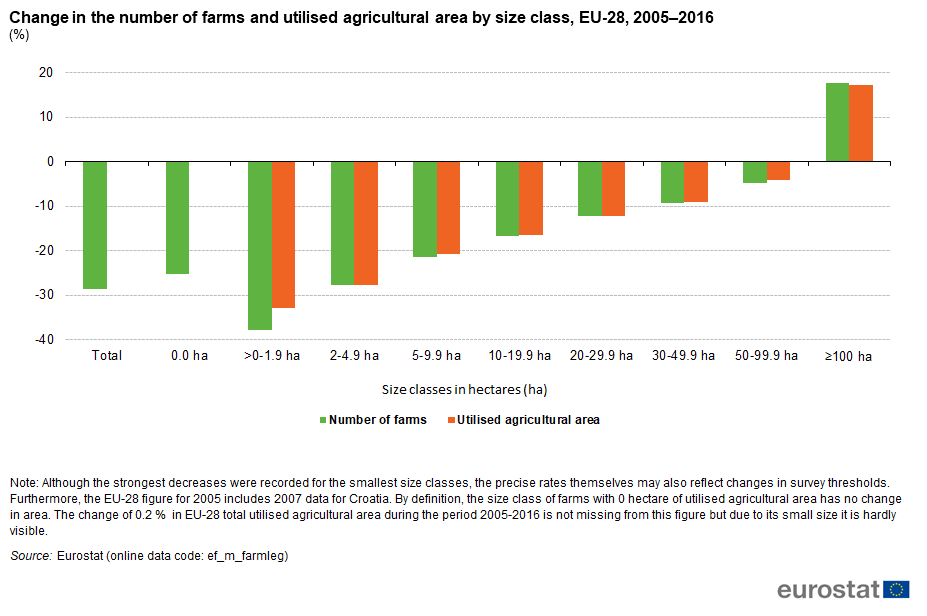 Among Member States, this readjustment took place in different size classes. In France, Germany, Finland and the United Kingdom, in particular, it was only in the largest farm size category of 100 hectares (ha) or more that there was growth in numbers and the utilised agricultural area, all other size classes shrinking. This readjustment took place in smaller size classes in many other Member States; for example, there was growth in farm numbers and utilised agricultural area in farms that were larger than 20 ha in Italy and in Romania, and in farms above 10 ha in Hungary and in Bulgaria in the period between 2005 and 2016.

Although comparatively few, the number of farms in the EU taking a legal form rose by about 40 000 through to 2016. This growth in farms of a legal nature was noted in every size category, although most notably in farms of a 100 ha or more in size.