Highlights
Tweet
In 2018, 1 106 million people in the EU travelled by air, an increase of 6.0 % compared with 2017.
Tweet
In 2018, London Heathrow recorded the highest number of air passengers (80 million), followed by Paris Charles de Gaulle (72 million).
Tweet
In 2018, Frankfurt/Main became the main European airport for freight and mail.

This article analyses recent data on air transport in the European Union (EU), both for passengers and freight and mail. It presents data on air passengers transported, showing the slight increase observed at EU-28 level between 2017 and 2018. The role of air transport in freight transport is less pronounced, as aircraft are an expensive transport mode in terms of tonne-kilometres and only competitive for longer distances and relatively light high-value or perishable goods.

The article distinguishes national (domestic), intra- and extra-EU transport, and also takes a look at the relative importance and ranking of airports.

In 2018, the total number of passengers travelling by air in the European Union could be established at 1 106 million, an increase of 6.0% compared with 2017 as presented in Table 1.

Figure 1 shows the total growth of air passengers by Member State between 2017 and 2018. The disparity is particularly marked at country level, with year-on-year growths ranging from 1.3% in Sweden to +19.2% in Lithuania. 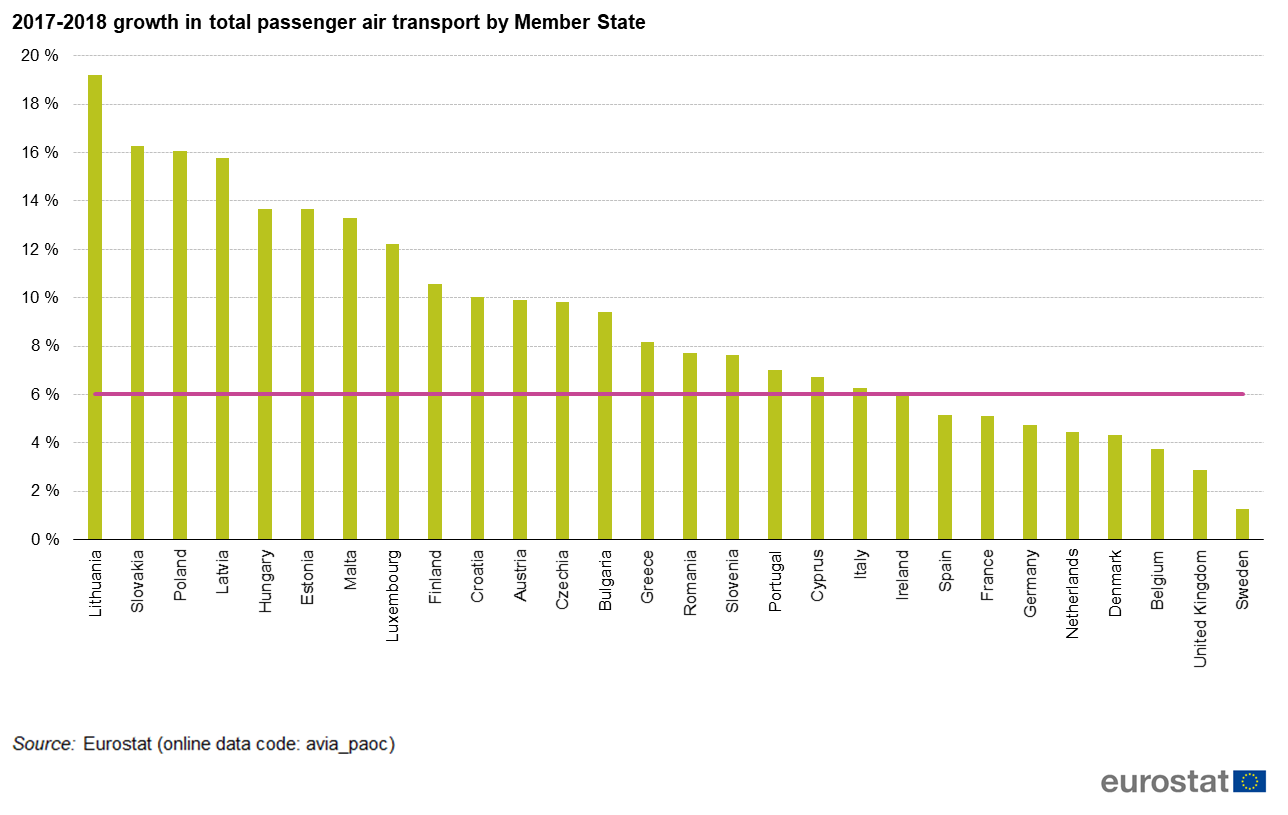 In 2018, London/Heathrow remained the largest EU-28 airport in terms of passenger transport. Frankfurt Main became the main European airport for freight and mail after 3 consecutive years where Paris/Charles de Gaulle was on the top (see tables 3 and 5). 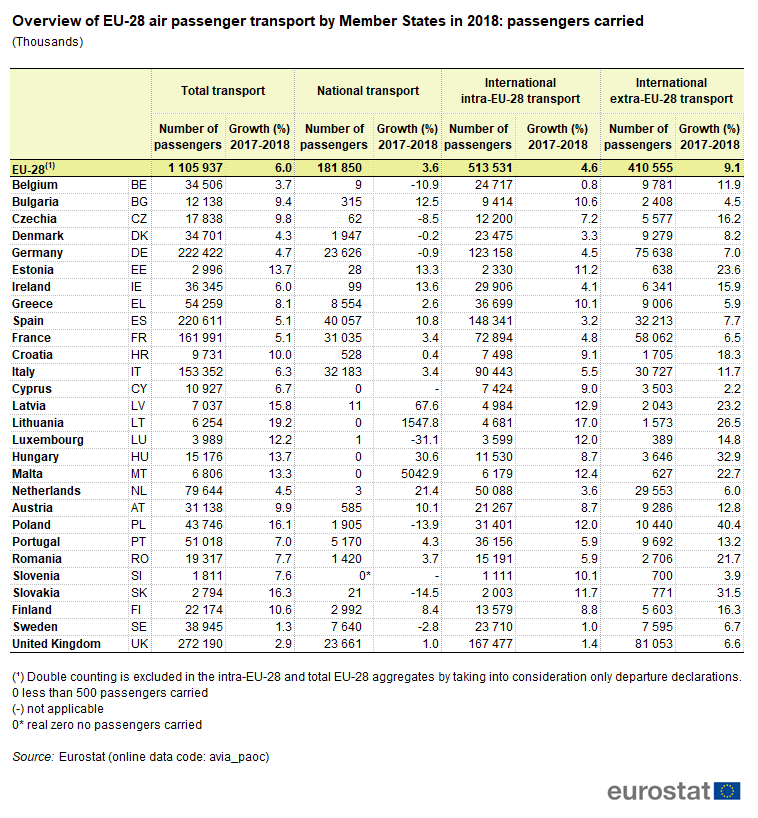 Figure 3 indicates that the intra-EU share in total transport could be established at 46%. It was the main destination ahead of extra-EU transport (37%) and domestic passenger transport (17%). 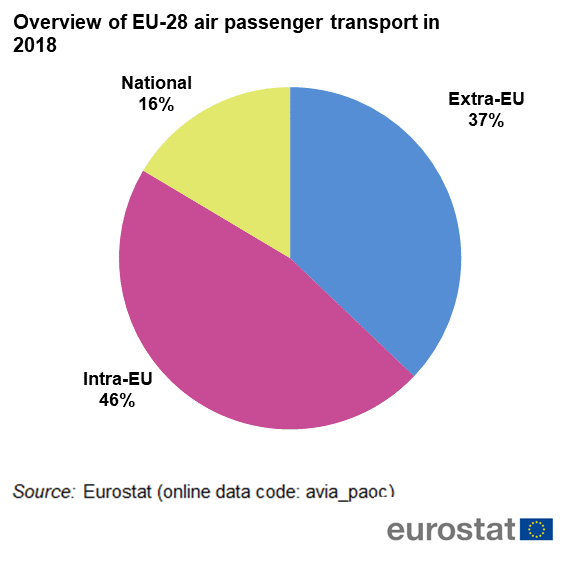 International intra-EU traffic at country level, as set out in Table 2, shows that for 2018, the top ten country-to-country flows in general remained stable compared with 2017. The United Kingdom is the country the most represented, being involved in half of the top ten routes. All routes are showing increases between 2017 and 2018 with the exception of the most important route, United Kingdom – Spain, that show a 3% decrease. 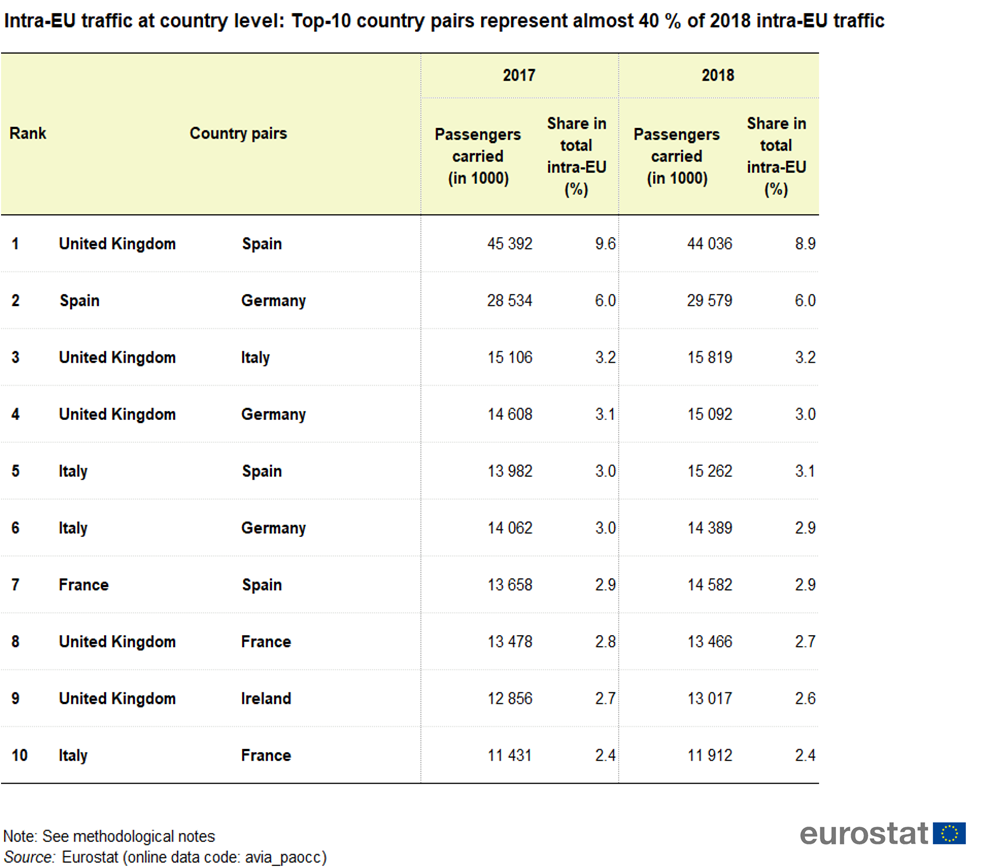 Map 1 gives an overall picture of the extra-EU market. With a 18% increase between 2017 and 2018, ‘North Africa’ is the partner world region with the highest increase for EU passenger transport. The highest and continued decrease of Australia – 7.8% could be partially linked to the increase in Middle East (+5.9%) – more passengers taking indirect flight to Australia changing in Near and Middle East airports. ‘Asian Republics of the Ex-USSR ‘ also recorded an important increase after a several years decrease +15.1%. 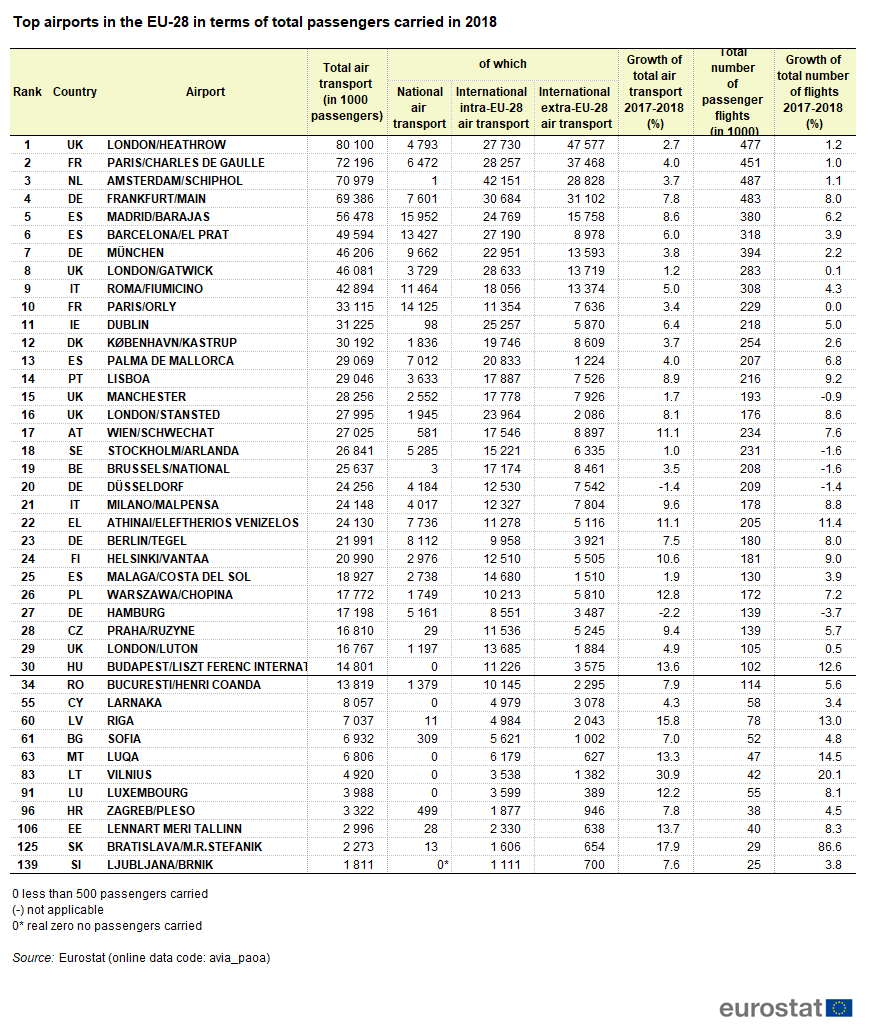 Table 3: Top airports in the EU-28 in terms of total passengers carried in 2018
Source: Eurostat (avia_paoa)

Although for a number of airports, total number of flights decreased (5 airports out of 41), total passenger numbers increased in 2018 compared with 2017 for almost all airports. There was a slight decrease for only two airports, Hamburg (-2.2%) and Düsseldorf (-1.4%).

Map 2 presents the top ten airport pairs within the EU-28. It is worth noting that all but one route are domestic ones. The route between Paris/Orly and Toulouse shows a decrease of 1.9% in 2018, contrasting with the 17.1% rise observed for the route between Berlin and Frankfurt Main. 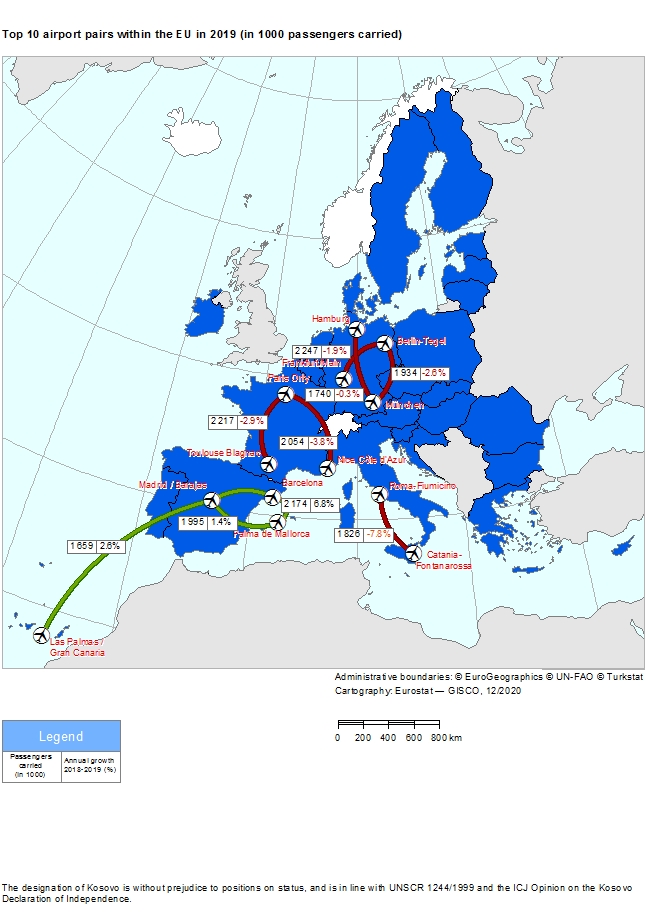 Air freight and mail transport: increasing international transport between 2017 and 2018 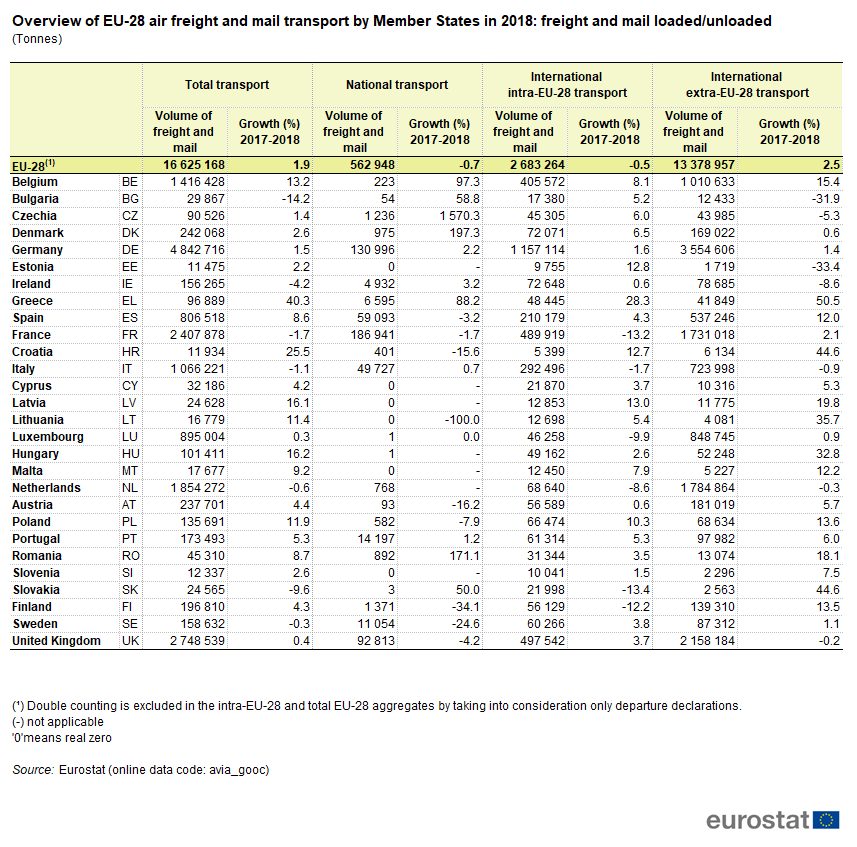 Frankfurt-Hahn shows an increase of 33.9% in terms of freight and mail loaded/unloaded between 2017 and 2018. 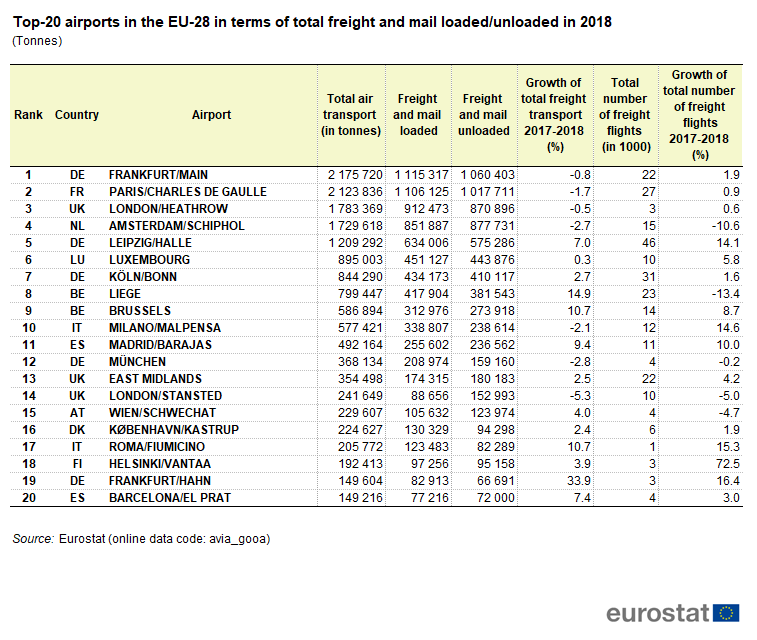 Table 5: Top 20 airports in the EU-28 in terms of total freight and mail loaded/unloaded in 2018 (in tonnes)
Source: Eurostat (avia_gooa)

All EFTA and candidate countries recorded an increase in terms of passengers transported. The evolution of freight and mail transport by air in those countries between 2017 and 2018 varies significantly, with growths ranking from 1.4% in Switzerland, to +17.0% in North Macedonia (see table 6). 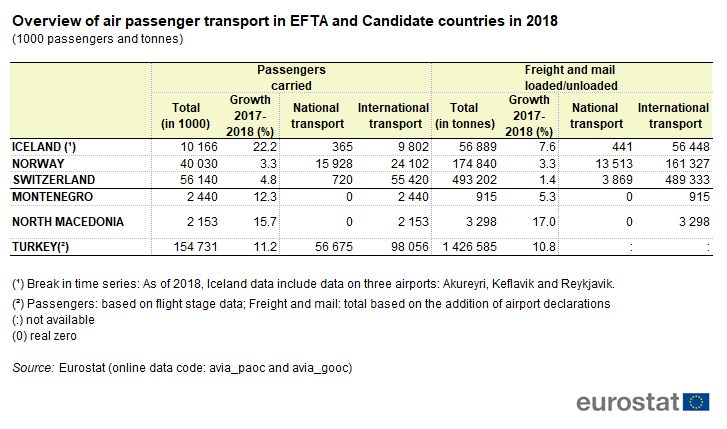 Table 6: Overview of air passenger transport in EFTA and Candidate countries in 2018 (in 1000 passengers and in tonnes)
Source: Eurostat (avia_paoc) Eurostat (avia_gooc) 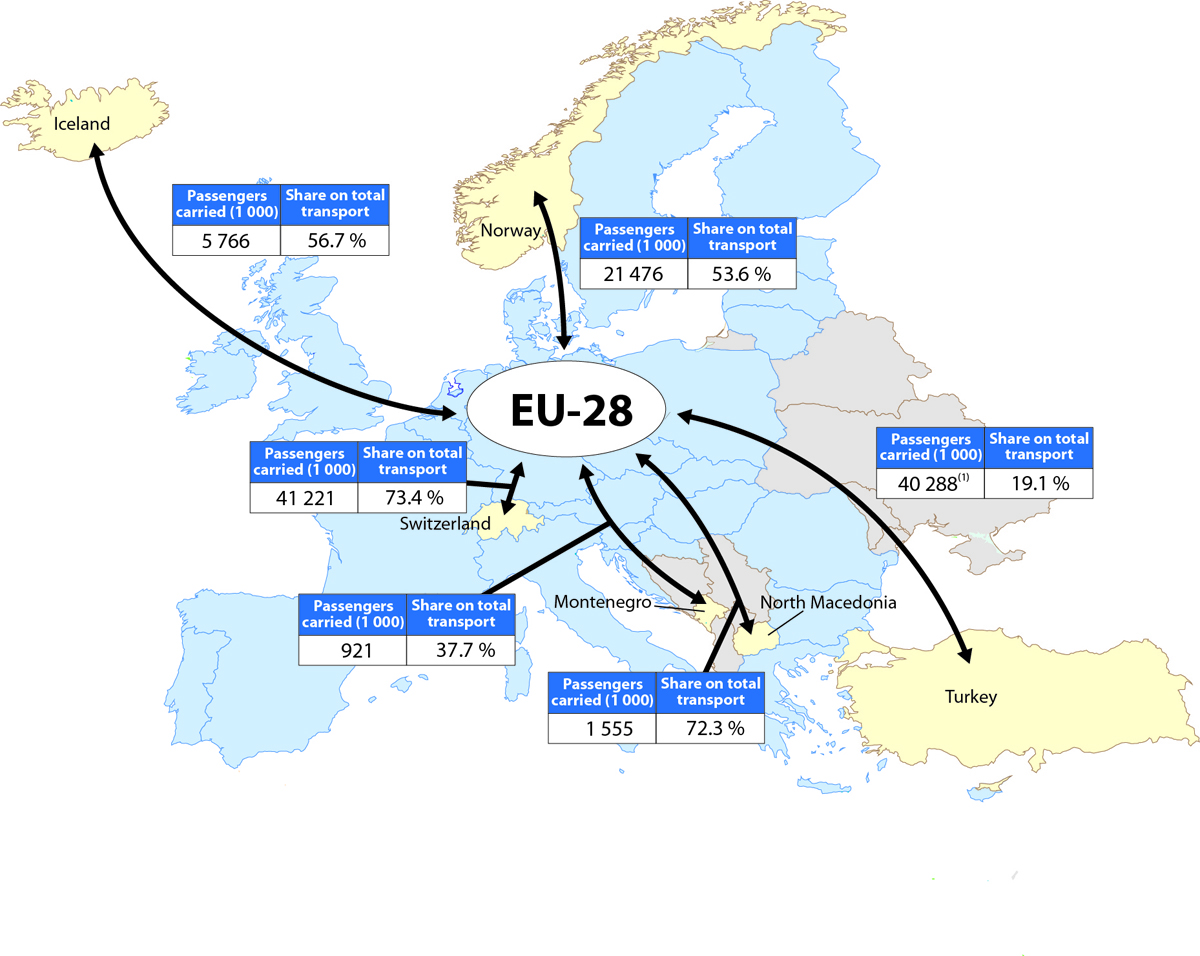 Traffic on a commercial air service identified by a unique flight number subdivided by airport pairs in accordance with the point of embarkation and point of disembarkation on that flight. This is linked to the definition of passengers carried.

All freight and mail loaded onto or unloaded from an aircraft. This excludes direct transit freight and mail. In principle, information provided in this article is based on On Flight Origin/Destination (OFOD) data. Only when OFOD data have not been reported have airport declarations been used.

In principle, this article covers air transport to and from any airports in the reporting countries with more than 150 000 passengers annually.

Table 1: the figures (and related shares) for the countries flows have been calculated by excluding the double counting at country-to-country route level. The figures are derived from table avia_paocc; the double counting for identical routes is excluded in order to obtain the correct total for country pairs. The data can be extracted from the aviation domain of the Eurostat on-line database or obtained upon request.

Map 1: the component countries comprising the world regions as defined for this map are based on the geonomenclature used by Eurostat for external trade statistics. The components of each world region can be extracted from the aviation domain of the Eurostat on-line database or obtained upon request. Some care should be taken in drawing conclusions as regards world regional shares due to the fact that passengers who either stop-over or change planes en-route will be allocated to the country in which they made their connections and not to the country of first origin or final destination.

Map 2: the total figures for each pair of airports have been calculated by adding together the ‘Departures’ declarations of the two airports concerned.