Insects could help increase Europe’s food self-sufficiency but will they catch on?

12 May 2020
by
Sandrine Ceurstemont
Republish 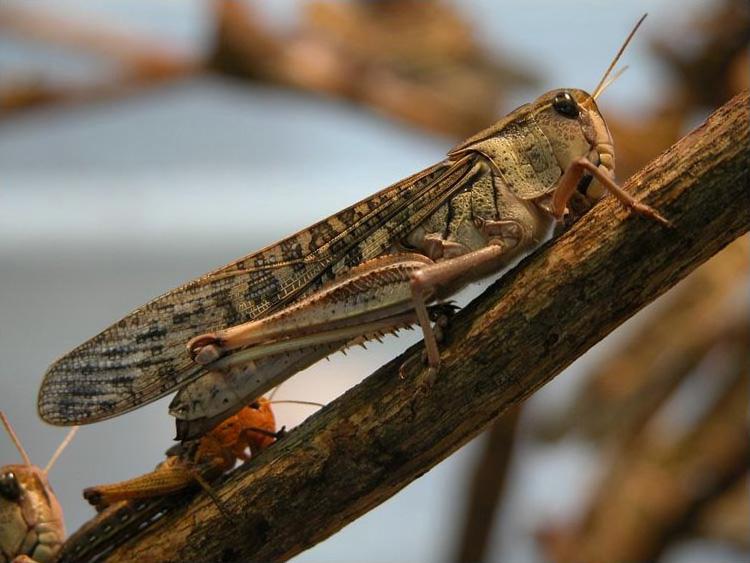 Using insect as a protein source could have big environmental advantages but it has yet to catch on in Europe. Image credit - Jonathan Hornung, licenced under CC BY-SA 2.0

Insects in products such as pasta or bread, microalgae, and single-cell proteins derived from wood could feed and nourish humans and animals in the future. Now, those exploring alternative proteins for more sustainable eating are working out how to make the switch to bug-based food a reality.

As the world population grows, it will be a challenge to meet everyone’s nutritional needs with traditional sources of protein.

The global population is expected to increase by 2 billion people in the next 30 years while meat production is likely to double in the same period to meet demand. This will have a significant environmental impact since raising livestock requires a lot of land – about 70% of the total used for agriculture – and emits up to 18% of all human-induced greenhouse gas emissions.

New protein sources are needed for animals, too. About 14 million tonnes of soya beans are imported by the EU every year to feed livestock such as pigs, cattle and chicken. Not only is the region reliant on imports, but the carbon footprint of transporting the crop is a concern as well.

‘Europe as a whole wants to be more self-sufficient when it comes to food,’ said Birgir Örn Smárason, a sustainable food production researcher at food and biotech company Matis, in Reykjavik, Iceland.

And if Europe is to meet the sustainable development goals and targets to limit climate change, sustainable protein sources will need to play a part. Edible insects, for example, can be reared using 50% to 90% less land in comparison to conventional livestock and produce about 100 times less greenhouse gas emissions. Furthermore, they can be fed organic waste – discarded food that often ends up in landfill.

Despite the promise of bug protein, using insects as animal and human food has yet to catch on. Technical issues mean they can’t be reared in large enough quantities. Regulation is a sticking point. Current EU legislation permits insects as feed in aquaculture but not for livestock. However, exemptions are soon expected to be made for poultry and pigs. And insects are still a niche human food sold only in some countries. That could change soon though as the European Food Safety Authority is expected to approve some edible insects for human consumption this year.

In Europe, there exists a cultural barrier too since there is still a disgust factor associated with eating insects. In Asian, African and Latin American countries, foraged insects are a regular part of the diets of some 2 billion people, Smárason points out. Acceptance among Europeans is one issue he and colleagues hope to address.

‘Europe as a whole wants to be more self-sufficient when it comes to food.’

Smárason and his colleagues think that insects such as crickets for human consumption and black soldier flies for animals are promising protein alternatives that can be produced locally, as well as microalgae and single-cell proteins. Single-cell proteins are produced from microbes feeding on sugars from woody biomass such as branches and roots left over from forestry. The researchers are investigating how to optimise production of these protein types both for human and animal food as part of the NextGenProteins project.

Microalgae, for example, is typically expensive to produce. But the team is working with an Icelandic company that has teamed up with a geothermal power plant to cut costs by using its sustainably-produced electricity, excess hot and cold water and carbon dioxide emissions – the only food the algae needs to grow. ‘It's a very unique and sustainable process,’ said Smárason.

Companies that produce food are also involved in the project. They have brought forward ideas for new alternative protein products, from imitation meats to energy drinks and bars, which they hope to bring to market. Smárason and his colleagues will be interacting with consumers to gauge their willingness to incorporate novel protein products in their diet.

‘We are setting up consumer focus groups in different countries where we will be gathering this information,’ said Smárason. He says it’s also important to communicate to consumers why they should consider these alternative proteins as well as asking them in what form they would consume it.

Since starting six months ago, the project has been gathering information about the three proteins, including their nutritional content, structure and solubility. Although they all have similar protein content, making up between 50 to 65% of their dry mass, they differ in terms of fat content. Insects, for example, are high in fat whereas single-cell protein is almost fat-free. Their characteristics will be useful for the development of specific food products or animal feed that need to meet different nutritional requirements.

In the coming months, members of the team will start conducting tests on animals to see how their growth and health is affected when different amounts of each of the three proteins are incorporated separately in their feed. Initial small-scale tests will involve salmon and sea bass. They will need to work out what the maximum inclusion for the different proteins in feed is so they can scale up the trial, says Smárason. 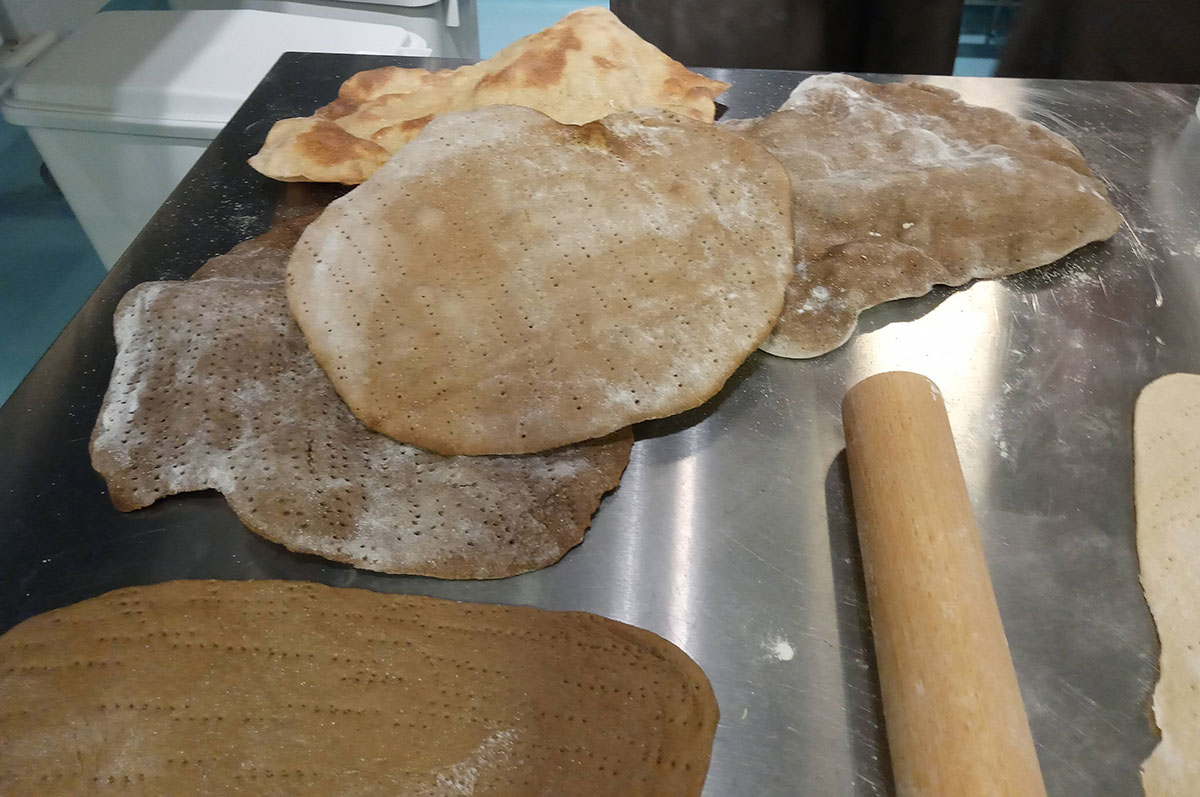 Rather than being eaten whole, insects could be ground up and used as ingredients in baked goods such as this cricket flatbread. Image credit - Nanna Roos

Proving that alternative proteins can be nutritious substitutes is only part of the puzzle.

Producing them on a large scale will need to be viable and cost effective for them to be widely used. Insects, for example, are already being reared in small quantities but they are a more expensive source of protein compared to soybean meal and fish meal which typically feature in animal feed. ‘By scaling up, we can reduce the cost price,’ said Dr Teun Veldkamp, senior researcher in animal nutrition at Wageningen Livestock Research in Wageningen, the Netherlands.

To that end, Dr Veldkamp and his colleagues are focusing on boosting the quantity of insects produced in Europe by improving technologies and developing new techniques as part of the SUSINCHAIN project.

Drying techniques such as microwave or low energy electron beam systems used to process fruits and vegetables, for example, will be investigated for the production of insect-based animal feed. Tests will then be carried out with fish, chicken and piglets to see how they respond to different types of processed insect feed, which will be of varying quality depending on the techniques used. ‘We will measure the performance of these animals looking for feed intake, for body weight gain and feed conversion ratio,’ said Dr Veldkamp.

The project also aims to develop new feed for insects. They can be reared on vegetable waste such as potato starch and other byproducts from potato processing. However, standardised feed will be needed to produce insects in large quantities. ‘We are looking to make a standard mixture to grow the insects because then you will also have a more consistent quality,’ said Dr Veldkamp.

Members of the team will also be developing insect food products for humans. Instead of products where insects are visible, such as cookies topped with crickets, they will create insect meal that can be incorporated into staple foods such as pasta and baked goods.

Since the project started last October, they have come up with six new food products such as falafel, flatbread and minced meat that will now go through consumer testing. ‘We are focusing on products you can use on a daily basis because we think that for society this will have the most impact,’ said Dr Veldkamp.

When the project comes to an end in 2023, Dr Veldkamp hopes that their results will encourage new companies to start rearing insects and existing companies to ramp up production. The goal is to attain a thousand-fold increase in both production amounts and jobs in the sector by 2025, while substituting animal protein with insect protein in 20% of human food and 10% of animal feed.

‘The knowledge developed in this project should make it interesting for feed companies to buy these products and to make the exchange with soybean meal or fish meal,’ said Dr Veldkamp.