Could there be life on Jupiter’s moons? 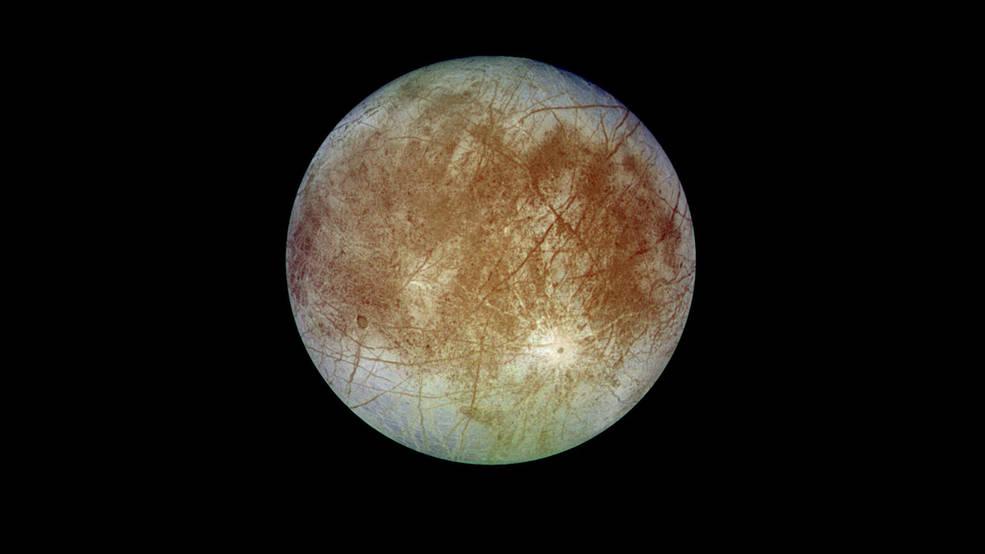 Europa, one of Jupiter’s large moons, is considered to be the best candidate for habitability because scientists think its sub-surface ocean is in contact with rock, meaning minerals can leach into the ocean and enrich it. Image credit - NASA/JPL

The search for life outside of Earth has taken many forms. Mars, our neighbouring world, looks like it was once habitable. Perhaps too Venus, despite its current hellish conditions. But in recent years, scientists’ gazes have been drawn elsewhere. What about the moons of Jupiter?

Three of Jupiter’s four largest moons are icy, and in 1998 NASA’s Galileo spacecraft detected tantalising hints of an ocean beneath one, Europa. Since then, further studies have detected signs of water plumes possibly erupting from this ocean.

The other two large icy moons, Ganymede and Callisto, are also thought to have oceans beneath their surfaces. Now, new questions are being asked: if there is water on these moons, could there be life? And could we look for it?

To help answer that question, the European Space Agency is planning to send a spacecraft to Jupiter in 2022, called the Jupiter Icy Moons Explorer (JUICE). Scheduled for arrival by 2029, it will perform multiple flybys of Europa and Callisto before entering orbit around Ganymede from 2032-2034 – the first spacecraft to orbit a moon other than Earth’s moon. During this time, it will return invaluable data back to Earth.

Before it even gets there, however, scientists are already busy studying these moons for signs of habitability, and preparing for the data that will be returned by the mission.

One of our best approaches so far has been to look for the effects of salt in the oceans on their electrical conductivity by studying magnetic fields around the moons. But these studies ‘have mostly neglected all the other effects that generate magnetic fields,’ said Professor Joachim Saur, a planetary scientist from the University of Cologne, Germany, such as thin atmospheres around the moons. ‘It’s very important to disentangle the effects that really come from the ocean.’

Prof. Saur is the project coordinator on Exo-Oceans, which is hoping to answer this question. The project is using models and data from NASA’s Galileo spacecraft, which orbited in the Jovian system from 1995 to 2003, along with measurements from NASA’s Juno spacecraft currently at Jupiter and remote observations from telescopes like Hubble, to examine these oceans.

‘Our results will not overturn the idea of an ocean,’ on Europa and Ganymede said Prof. Saur, although he noted they might question one on Callisto. But it’s hoped they could give a better indication on things such as the thickness of the oceans, their salt content, and their distance from the icy sheets above.

All this has important implications for the habitability of the moons. To be able to support life, it’s thought the oceans need to be in contact with rock at the bottom in order for life to have a source of ‘food’, and currently only Europa is thought to meet that condition.

‘Europa is one of the best candidates for habitability because the liquid water is in direct contact with the silicate mantle,’ said Prof. Saur. ‘So there’s a possibility of the leaching out of minerals from the crust into the ocean. And the richer it is in chemical compounds, the better it is for the evolution of life.’

But there’s only so much that can be done before JUICE arrives. Once it does, its magnetometer instrument will provide useful measurements on the magnetic fields of the moons, giving us vital data on the oceans underneath. ‘This will allow us to separate all the different effects,’ said Prof. Saur.

‘Europa is one of the best candidates for habitability because the liquid water is in direct contact with the silicate mantle.’

Another important factor regarding the habitability of the moons is how much radiation from Jupiter is hitting them. Jupiter produces a lot of damaging radiation, so much that it can harm spacecraft that get too close.

One way to study this is to observe aurorae on the moons, produced when charged particles from Jupiter hit magnetic fields around them. Europa, for example, has a constant aurora that can be observed in ultraviolet images from Hubble.

‘It relates to how the moon is exposed to this radiation because the charged particles from the radiation creates the aurora,’ said Dr Lorenz Roth, a planetary astronomer and physicist from the KTH Royal Institute of Technology in Stockholm, Sweden. ‘So it’s kind of a measurement for how much radiation is there.’

Dr Roth worked on the AuroraMHD project, which sought to use some of these auroral observations of Europa and Jupiter’s volcanically active moon Io to learn more about them. While the project was hampered by the Covid-19 pandemic, it did provide some useful data.

In particular, it helped confirm the existence of water plumes on Europa, and investigated how they interacted with its atmosphere. And it’s hoped that this work can be built upon, with JUICE, to further study the habitability of Jupiter’s icy moons.

‘The question of habitability and life always lingers in the background,’ said Dr Roth. ‘In all aspects, including size, the large Jupiter moons are like planets: they are similar to or bigger than Mercury, one has a magnetic field, they have atmospheres, they have oceans (and so on).

‘Europa is more promising (because its) water is very likely directly connected to the rocky material at the sea floor, which allows some reaction to take place.’

JUICE will be equipped with its own ultraviolet instrument that could study the aurorae of the moons in more detail, helping scientists work out how Jupiter’s radiation might impact their chances of life. ‘Once JUICE is in orbit, we’ll get a lot of information,’ said Dr Roth. ‘It can continuously measure the magnetic fields around the moons.’ 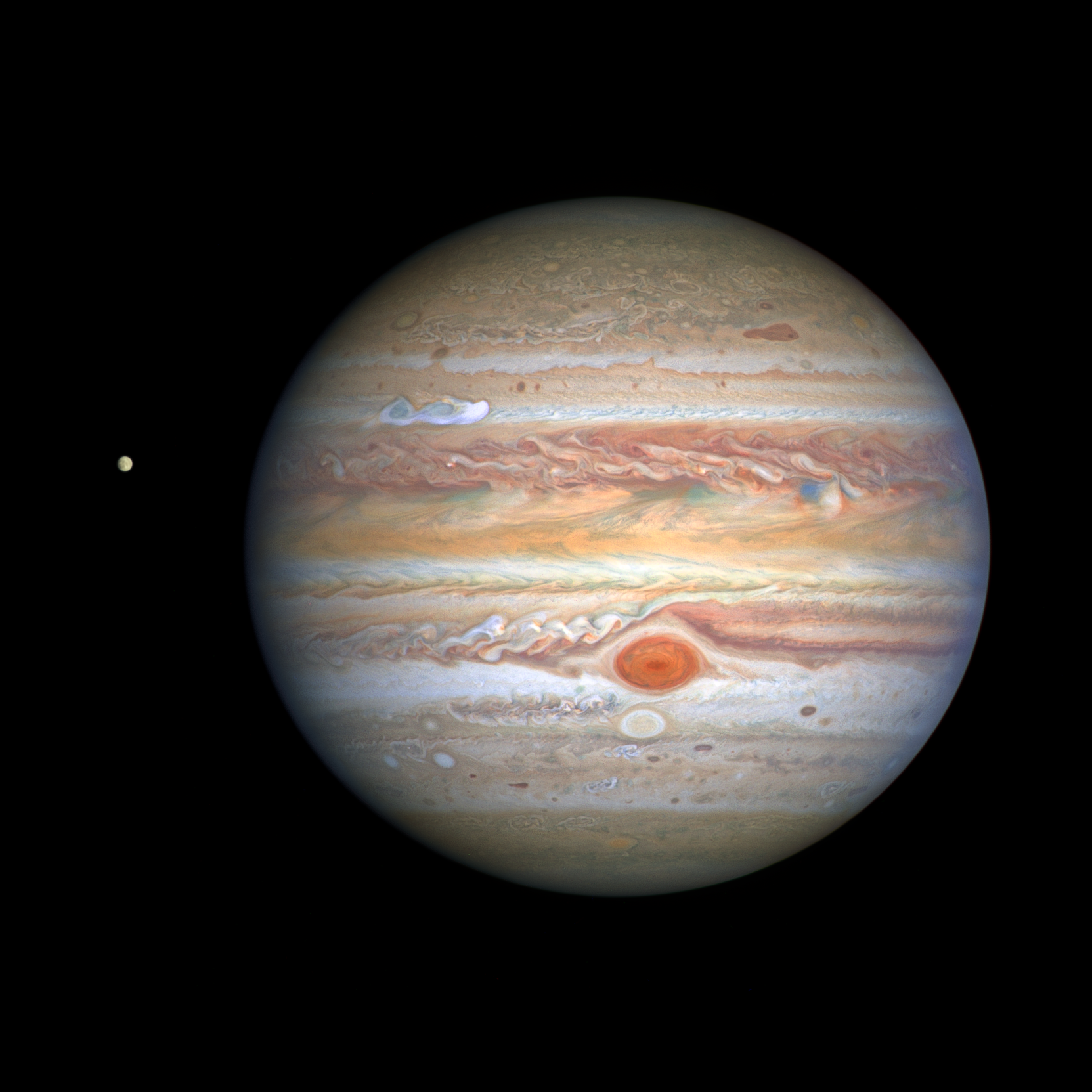 By itself, JUICE is not expected to tell us definitively if there is life on Jupiter’s moons. But its data, along with NASA’s Europa Clipper mission that will arrive in the Jovian system at a similar time to study Europa, could provide useful information on their potential habitability.

In the same way that initial missions to Mars assessed its habitability, before later missions – like NASA’s recently-landed Perseverance rover – were sent to look for life, so too might similar research take place for Jupiter’s moons.

‘While JUICE and the Europa Clipper have not even launched yet, there are already discussions about what could be next,’ said Prof. Saur, such as landers using drills to go into the ice and sample these oceans. ‘There is already work going on in parallel on what could be the next steps,’ he said.

The future of fashion is woven with planet-friendly fibres made from textile waste.
END_OF_DOCUMENT_TOKEN_TO_BE_REPLACED