Located in Białystok, capital of Poland’s Podlaskie region, the Branicki Palace is known as the Polish Versailles. Its baroque garden complex had long suffered from a lack of maintenance but an EU-funded project has revitalised it by restoring the forecourt and central section to their former splendor. 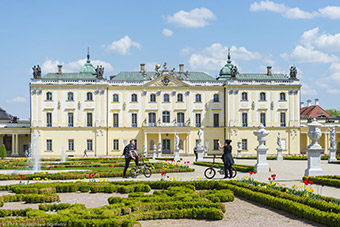 " With the completion of the project, the garden of the Branicki Palace is once again a show-piece of Białystok. It is visited by residents and domestic and foreign tourists, and as well as functioning as a touristic and recreational strolling and leisure area, it is also used for cultural purposes, hosting events like concerts and theatre performances. "

The investment covered installation of a water supply network, work on a fountain pumping station, restoration of four fountains in the central section and two in the forecourt, and improvements to lighting, hedges and greenery. Gravel and stone slab paths were resurfaced, the retaining wall was reinforced and renovations were carried out on the pavilion, concrete sculpture bases, stone balustrades and sandstone benches.

Other activities included construction tasks on the interior of the main gate, on small architectural elements in the forecourt and on the steps leading to the courtyard.

Prior to the project, numbers of tourists visiting Białystok and the surrounding area were low and tourism was having little positive impact on local economic competitiveness.

Statistics showed that many of the tourists who visited Podlaskie headed to places such as Biebrza National Park, Białowieża Forest and the spa town of Augustów. Owing to its perceived lack of attractions, Białystok was seen as a stopping-off point en route to other destinations. The neglect of the Branicki Palace grounds was viewed as having exacerbated the situation.

To promote tourism, a number of activities were started to capitalise on Białystok’s unique cultural heritage. One of the key features of this was the city’s historical status as the seat of the Branicki family, one of the most powerful noble families of the Polish-Lithuanian Commonwealth. Restoration of the Branicki Palace gardens – which are an outstanding example of the baroque garden style – thus constituted a major part of these efforts.

Archive documentation on the original 18th-century design of the gardens was used to recreate those features which had not survived intact, with the same materials used for the originals. In parallel, modern fountain technology, including a closed underground irrigation system and sand filters, was installed.

With a view to creating a unique tourist product, a complementary project to disseminate historical information about the complex via multimedia technology was implemented at the site.

As a result, the Branicki Palace gardens now attract educational, cultural and historical tourists from Poland and abroad, many of whom also take in other local sights. Regional visitor targets for 2013 were met and tourism levels have remained high, strengthening the economy, bringing in investment and supporting employment in the district around the palace.

In addition, the gardens serve as a venue for cultural events such as concerts and provide a centrally located, free-to-enter green space for walking and recreation – something which Białystok previously lacked. As well as boosting tourism, the restoration has encouraged local residents, including the elderly and people with disabilities, to visit and improve their knowledge of the area’s history and culture.

Total investment for the project “Revalorisation of the Baroque Garden of the Branicki Palace” is       EUR 3 417 757, with the EU’s European Regional Development Fund contributing EUR 1 644 621 through the “Podlaskie” Operational Programme for the 2007-2013 programming period. The investment falls under the priority “Development of culture and tourism”.

Podlaskie
View programmes for this region