Three new tunnels have transformed what was the most dangerous part of the Thessaloniki-Athens motorway. The Tempi tunnels have halved the travel time on the new sections and reduced the drive from Athens to Thessaloniki to just over four hours. The new section is bringing economic benefits and has dramatically improved road safety. 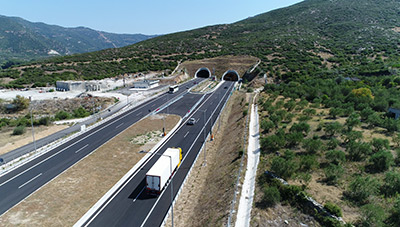 " The new road is a masterpiece. "

EU co-financing allowed the upgrade of 230 km of TEN-T motorway, stretching from Kleidi in Central Macedonia to the Maliakos Gulf in Central Greece.

As part of the works, a new 30 km section between Evangelismos and Skotina was constructed, including 11 km of tunnels. This includes a 6 km tunnel at Tempi – the longest road tunnel in south-east Europe – as well as two smaller tunnels.

Road users benefit from faster and easier travel as travel time on the new sections has been reduced by half. The new constructions have allowed for an increase of 13 % in commercial and touristic traffic that is contributing to Greece’s economic growth. More than 5 000 local people were directly involved in the construction work, increasing employment in the region.

The new road and tunnels provide greater driving safety, replacing what was previously a very dangerous and narrow national road in the Tempi Valley and Platamonas. Dozens of lives had been lost on the stretch, including 21 high school students in 2003. Accidents have been reduced by about 19 %, with fatal accidents down by 77 %.

As well as benefiting from safer travel, tourists can enjoy beautiful views over the Pinios River, Mount Olympus and Mount Kissavos along the route. The Tempi Valley has also benefited from the project’s environmental protection measures.

The new section and tunnels were opened with an inauguration ceremony in 2017.

The motorway is the second longest in Greece. Its total length is around 550 km.

The A1 is the principal north-south road connection, connecting the capital Athens with the regions of Thessaly and Macedonia, and the second largest city Thessaloniki. The project is part of five motorway concessions which constructed and upgraded approximately 1400 km of roads in Greece, providing the country with a modern motorway network that forms part of the country’s key transport infrastructure.

The newly-built and upgraded roads are part of the Trans-European Transport Network (TEN-T), an EU drive to integrate transport networks across the EU. They form part of the European main road route running from northeast to southeast Europe.