Ukraine: making it easier and quicker for Member States to use cohesion funding to support immediate needs of refugees

To further support Member States welcoming and accommodating refugees fleeing the war in Ukraine, the Commission has proposed a simplified financing procedure under 2014-2020 cohesion policy to tackle the additional costs involved. 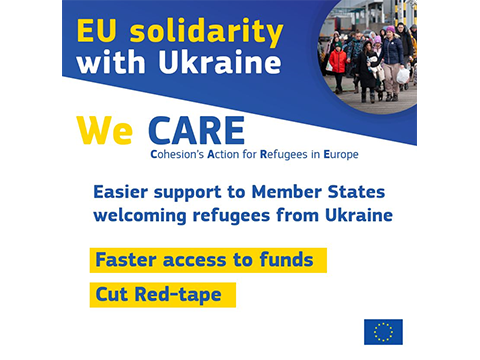 The proposal introduces a new “simplified cost option”, to cover for immediate needs of refugees such as food, basic material assistance as well as accommodation and transportation costs. This proposal complements the additional flexibility already introduced by the Cohesion's Action for Refugees in Europe proposal and the increase by €3.4 billion of the pre-financing under the REACT-EU.

This responds to  calls by the European Council and the European Parliament to work on additional proposals to reinforce EU support so as to ensure that EU funding for refugees and their hosts can be mobilised rapidly.

Commissioner for Cohesion and Reforms, Elisa Ferreira, said: “Member States, regions, municipalities and NGOs have made enormous efforts over recent weeks to provide help and assistance to those fleeing Ukraine. The EU is looking at all possibilities to assist Member States in delivering this humane support as quickly and as effectively as possible. With this proposal, we are making the use of cohesion funds easier, reducing the administrative burden and facilitating the financing of refugee's basic needs.”

Member States will be able to benefit from a predefined amount per week for all those who have been granted temporary protection under the Temporary Protection Directive and are located in that Member State. This option can be used for a maximum of 13 weeks from the arrival of each person in the EU.

Using simplified costs also means that Member States' human resources and administrative efforts can focus on delivering the support to those in need faster. This new proposal presents an additional amendment to the Common Provisions Regulation and requires approval by the co-legislators. Once adopted, Member States can use this new option immediately.