Together for the Planet! ENI CBC Med at COP26

Save the date! On the 9th November, the ENI CBC Mediterranean Sea programme is featured at COP26 EU in an online session about climate and energy action. 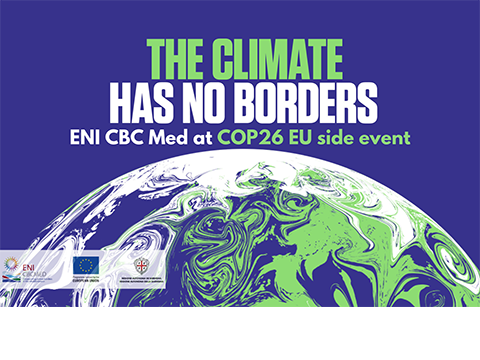 Yes, it is possible: reducing emissions, developing energy efficient buildings, moving forward a greener, carbon-free environment. Two ENI CBC projects will be showcased this year at the UN climate change conference COP26, highlighting their contribution towards a resilient, climate neutral future. They are implemented within the framework of the ENI CBC Mediterranean Sea Basin programme, which will attend the digital side events held within the European Union Pavilion at the conference. COP26 is taking place from 31 October to 12 November 2021 in Glasgow, under the presidency of the United Kingdom.

The ENI CBC Med programme will be part of the online session “Racing to 1.5º: cities implementing evidence-based climate and energy action in Europe & Mediterranean”, which is scheduled on the 9th of November from 6,30 pm to 7,30 pm CEST. The discussion will showcase impact-driven success stories of cities and local actors in climate and energy plans, and concrete measures towards a resilient, climate neutral future. In particular, the ENI CBC Med programme will present the results of two energy efficiency projects, BEEP (Building Information Modelling for Energy Efficiency in the Public Sector) and ESMES (Energy Smart Mediterranean Schools Network). Ms. Sorina Mortada, from the Lebanese Centre for Energy Conservation - partner of both initiatives - will highlight the efforts and achievements of local organisations in accelerating the adoption of energy efficiency measures in the public sector across the Mediterranean region.

The session is organised in partnership with the Global/Europe Covenant of Mayors for Climate and Energy, the EU funded project Clima-Med and the Municipality of Segrate (Italy). Speakers will include representatives of the European Commission (DG NEAR and the Joint Research Center), of the cities and regions that are part of the Covenant of Mayors, the Clima-Med project and the Mayor of the Municipality of Segrate.

Do not miss the chance to register and have a look at the full programme of the EU side events at COP26.