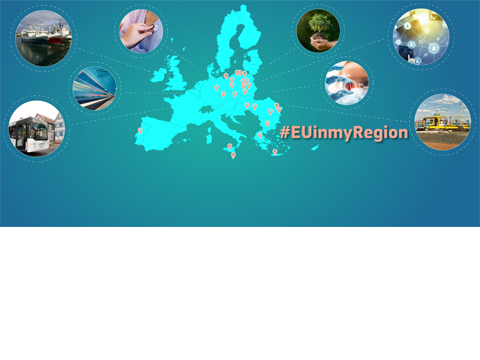 Commissioner for Regional Policy Corina Creţu said: “These 25 projects are as many examples of how the EU is working to improve everyday life for our citizens from better drinking water to faster rail transport and modern hospitals. In the current budget period, I have adopted 258 large infrastructure projects worth €32 billion of EU funds; they are, in a way, the ambassadors of Cohesion Policy and I'm proud of each and every one of them.”

€33 million of EU funds will finance the construction of a 182-km cross-border gas interconnector between Komotini, Greece, and Stara Zagora, Bulgaria. The pipeline is a European Project of Common Interest, contributing to the objectives of the Energy Union. The two countries' gas systems will be linked for the first time, diversifying energy sources in the region and increasing energy security. With more competition on the gas market, consumers will enjoy lower prices.

First, €76 million is financing upgrades on the rail corridor between Prague and Pilsen. Works include new or reconstructed tracks between Rokycany and Pilsen, shortening travel time by half on this section and reinforcing the attractiveness of Pilsen as a regional economic centre. Then, almost €75 million is invested in a road from Nebory to Bystřice, as part of a major link between the Czech D48 motorway and the Slovak D3 motorway.

In Jena, Thuringia, the Friedrich-Schiller-University's facilities will be given a makeover with almost €84 million of EU funds. The project will finance the construction of two buildings: the university data centre and the faculty of mathematics and IT science, benefitting 18,000 students.

Almost €135 million is invested in the “Syzefxis II” telecom system, which will eventually unify the entire Greek public administration network. An additional 600,000 civil servants and 34,000 premises will be connected to the system, resulting in important economies of scale and better services to the population.

Then, almost €95 million will fund the construction of an electricity interconnection between the island of Crete and the Peloponnese peninsula. It includes two 135-km submarine power cables. This project will lower the costs of electricity in Crete, by replacing expensive oil fired generation units with electricity from mainland Greece.

€105.5 million will finance upgrades on the southern section of the Budapest ring road, with reconstructed roads, bridges and new cycle paths. This project will shorten travel time and improve road safety for the 90,000 vehicles circulating daily in the area. In addition, it will reduce congestion by diverting traffic away from the city centre.

More than €358 million of EU funds will help extend the Circumetnea railway line operating in Catania, Sicily, with eight new stations and rolling stocks. This project will help reduce congestion on the road network and will promote clean mobility in the region.

Almost €74 million will provide Malta, Gozo and Comino islands with better drinking water, enhanced security of water supply and improved groundwater resource management. The project will benefit the entire population of the country. EU-funded works include an underground tunnel and the extension of water and wastewater distribution networks.

In the field of healthcare, almost €61 million of EU funds will help purchase new equipment for the University Hospital of Kraków, Małopolskie, benefitting over 3.3 million inhabitants. Then, €56 million will help build a new hospital complex for the Regional Centre of Children Health in Poznań, Wielkopolskie, centralising healthcare services, extending facilities and buying new equipment. The Centre will be equipped with an emergency care department for children and will enlarge its orthopaedics, traumatology and rehabilitation departments.

In rail transport, €126 million will help build the Szczecin Metropolitan Railway, connecting the main cities of Western Pomerania including Stargard, Police and Gryfino and benefitting 687,000 inhabitants. Almost €39 million will help purchase 16 electric train units, which will operate in the Warsaw agglomeration. Almost €58 million will help modernise 152 passenger carriages and purchase 20 electric locomotives, which will circulate on the routes operated by PKP Intercity in the country.

The Ovar-Gaia section on the Northern railway line, part of the Trans-European Transport Network, will be modernised with almost €119 million of EU funds. Passengers will enjoy shorter travel time, more comfortable conditions and increased safety on this axis.

€1 billion will help upgrade Bucharest's ring road by expanding several of its sections, doubling the lanes in each direction. It will also support the construction of a 51-km section of the southern part of the new Bucharest Orbital Motorway. Still in the Romanian capital, €97 million of EU funds will finance works on the entire metro line 2, with new tracks and rolling stocks.

Then, almost €603 million will support the protection and rehabilitation of the highly touristic area of the Black Sea coastline in the Constanța County. The project includes cliff consolidation works, replenishment of sand on the beaches, biodiversity preservation measures (artificial reefs and repopulation of marine species) as well as monitoring equipment.