Archive:Marriages and births in Sweden

Contrary to trends in the rest of the EU, marriage in Sweden has become more common during the 2000s. The crude marriage rate, that is, how common it is to get married, is also higher in Sweden than in the EU Member States in total. At the same time, many people live together without being married, and the majority of children are born out of wedlock.

Table 1: Number of people who entered into marriage with a person of the same-sex in 2013 by age and sex, Sweden 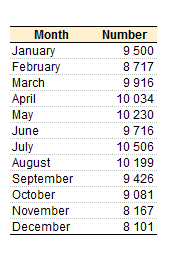 In 2013, 51 554 marriages were entered into in Sweden. The number of marriages has varied in recent years, but the trend is that it has become more common to marry. We see this when looking at the share of marriages per 1 000 inhabitants, the crude marriage rate, which has increased from 4.5 in 2000 to 5.4 in 2013.

It is also more common to get married in Sweden compared with the rest of the EU. The latest available crude marriage rate for all 28 Member States of the EU is 4.2 (2011).

If we look at the population of those aged over 20, a total of 43.9 percent were married. Women are on average younger than men when they marry for the first time. The mean age for persons marrying for the first time was 33.0 years for women and 35.7 years for men.

But not all marriages last a lifetime. In 2013, 26 933 marriages ended in divorce. This was the highest number since 1975. In the last three decades the figure has fluctuated between 20 000 and 25 000 divorces per year, with a few exceptions.

On average, marriages that end in divorce last eleven years in Sweden, but many divorces occur after four – five years. When marriage becomes more common it will thus be more common to divorce after several years. Between 2001 and 2008 the number of marriages increased, and this was followed by an increasing number of divorces in 2005 and afterwards. The number of divorces per 1 000 inhabitants, that is the crude divorce rate, increased from 2.2 in 2005 to 2.8 in 2013. This is higher than many other EU Member States. If we look at all the EFTA countries as well as the candidate countries and potential candidate countries for EU membership, the crude divorce rate was below 2.5.

1.3 million people live together without being married

But in Sweden it is also common to live in the same household in a marriage-like form, but without being married. At the beginning of 2011, a total of 1.3 million people aged 20 or older lived together with another person without being married. This number corresponded to 18.3 percent of the people in that age group. This was also the highest figure for all EU countries.

More children per woman during the 2000s

The trend in recent decades is that women in Sweden, as in the rest of the EU, wait longer to start a family. In 2000 the average age of first time mothers was 27.9; in 2013 the corresponding figure increased to 29.1. It is somewhat higher than the EU average of 28.7. There are also some regional differences in Sweden. Above all, the average age for women to have their first child is higher in and around the metropolitan areas where the population is steadily growing.

Same-sex marriage most common in the metropolitan areas

Sweden has had a gender-neutral marriage law since 2009. This means that two people of the same sex can marry according to the same legislation that applies to two people of different sexes. The new law replaced the law on registered partnership that was introduced in 1995. Even though there is no legal difference between a partnership and a marriage, many same-sex couples chose to convert their partnership to marriage when the new law was introduced.

In 2013, 652 women and 498 men registered in Sweden married a person of the same sex. As a rule, women who marry each other are younger than men. The average age for women who enter into same-sex marriage was 34 while the corresponding age for men was 42.

August most popular month for weddings

Many marriages in Sweden occur during the summer months. In 2013 nearly half of the couples (48 %) married in the months of June, July and August.

But this has not always been the case. When Sweden was an agricultural society, it was common to marry at the end of the year. Not until completing the hard work at the end of the summer was there time for festivities and starting a family. During the summer, and particularly in August, few weddings took place. As an agricultural society was gradually replaced by an industrial society, it became more common to marry in the summer.

Most children born during summer

Summer is on the whole eventful when it comes to starting a family. During the 2000s it has been the time of year that most children are born, which may indicate that pregnancies are planned to a greater extent, and many couples then prefer to have children during their holidays. In 2013, 10 506 children were born in July, while the least number of children were born in December (8 101).

This is also a pattern that has changed over time. During the 1970s, 80s and 90s, most children were born in the spring in March and April, that is, about nine months after the summer holidays. However, November and December have long been the months of the year when the fewest number of children are born in Sweden.