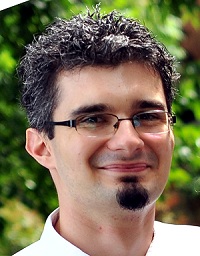 Science does not recognize borders, nations or nationalities. It is a universal tool which provides better understanding of life and the world around us. During my PhD I had the opportunity to travel and work in other scientific labs in Germany. This valuable experience helped me in my research and also contributed to create my understanding of how scientific research should be. Working in international collaboration is something I would suggest to every young PhD student and that's why I support the Youth on Move project as an Ambassador.

In addition, raising awareness about the importance of scientific research and science communication are also aspects which I'm interested in. The international collaboration and exchange we have through the Summer School of Science project motivate younger generations to develop an interest in science and become scientist in the future.

From a very early age, Marko was interested in mathematics. But soon, after “discovering” chemistry, his focus changed from numbers to molecules. That was mostly due to his chemistry teachers who encouraged him to learn more. He took part in chemistry competitions, and in 2003 won a bronze medal on the 35th International Chemistry Olympiad. Chemistry was a logical choice for his career. He graduated chemistry at the Faculty of Science, University of Zagreb in 2007 and received a PhD in biochemistry from the same university in 2013. Since 2008 Marko is working as a research assistant at the Ruder Boskovic Institute in Zagreb. His scientific interests are molecular mechanisms of Alzheimer’s disease, especially the role of lipids in neurodegeneration. During his research career, Marko traveled a lot and worked in international laboratories in Munich, Munster and Bonn.

In addition to chemistry, Marko’s passion is science communication and popularization. He is actively involved in Zagreb Science Festival (Science Fair) since 2007 as a lecturer and workshop leader. He participated as an invited speaker in other Science Festivals (Novi Sad, Athens, Sinj) as well. In 2008, Marko won Croatian and International FameLab competition (Cheltenham, UK), a competition in 3 minute oral presentations on scientific topics without any slides. His winning presentation “Biochemistry of love” attracted media and resulted with more than 50 interviews for national and foreign TVs, newspapers and radio stations. In 2012 he was invited speaker on TEDxMaksimir where he spoke about his activities in science communication.

Marko is also active in education. Since 2005, he prepares young Croatian representatives for International Chemistry Olympiad. Since 2007 he is actively involved in Summer School of Science in Croatia as a project leader (2007 and 2008) or organizer (2009 - present). He enjoys working with talented and motivated high school students and is fascinated with how much one can do in an improvised lab without sophisticated equipment. Together with his colleges, who have been volunteers at Summer School of Science for many years, Marko founded “Society for Out of Frame Education” in 2011. The mission of the Society is to educate all age groups in the area of critical thinking, as well as to promote freedom of speech and expression. The Summer School of Science together with partner program Summer Science Factory was awarded with Google RISE price as one of the best educational projects in the world.