Austrian student doesn’t have to pay hospital bill in Netherlands 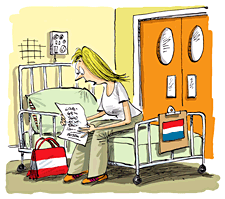 An Austrian student needed an operation while studying in the Netherlands.

Under EU rules, she had the right to be treated in the same way as people insured in the Netherlands. This meant that the hospital should have sent the bill directly to her insurer – instead of asking her to pay the bill.

SOLVIT pointed out this would be considered discriminatory. The hospital duly corrected the bill and sent it to the relevant Austrian insurance body.

More on: Health insurance for students in another EU country 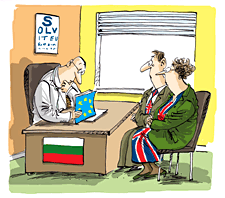 A British national, resident in Bulgaria, was incorrectly charged for a doctor’s consultation in Bulgaria - despite having presented the right documents.

The doctor refused to accept her papers claiming that he had not received any guidance about treating patients from other EU countries.

But Bulgarian nationals are not charged for doctor’s consultations and EU law requires that EU nationals are treated in the same way as nationals of that country.

After SOLVIT intervention, the Bulgarian authorities sent a letter to the patient confirming her rights and the doctor withdrew the request for direct payment from the patient.

More on: Health insurance when settling in another EU country

German national can have her medical check-up in Spain

More on: Health insurance when settling in another EU country

Belgian national can get specialist surgery in France

A Belgian national obtained permission from his Belgian health insurer to have his hernia operation in a specialist clinic in France.

But the French health insurance organisation told him the surgery would not be refunded – even thought this kind of operation is usually reimbursed in France. The French insurer's position is contrary to EU law. Once you are authorised by you home health insurer to receive non-emergency healthcare treatment in another EU country, you are entitled to receive treatment under the same conditions as nationals of that country.

SOLVIT France pointed out that this was an incorrect application of EU law and persuaded the French health insurer to correct the situation. It then sent an amended tariff form to the Belgian health authorities, and the Belgian national received reimbursement for the surgery costs.

More on: Planned treatment in the EU

A Greek national had to be hospitalised when travelling in the Czech Republic. One year later he received an invoice from the hospital concerned for several hundred euros – even though he had presented his European Health Insurance Card (EHIC). The hospital claimed that neither the name nor the gender of the citizen were the same as those indicated on the EHIC.

The discrepancy resulted from the translation from Greek into Czech. In addition, the citizen who was originally named after a Greek god of mythology had changed his name.

SOLVIT provided the Ministry of Health in the Czech Republic with the necessary explanations and evidence (social security number and birth certificate) to prove that the holder of the EHIC and the person who had been treated in the hospital were one and the same person. After SOLVIT's intervention, the citizen received a full reimbursement of the costs he had paid.