General description of the database

LABREF is a descriptive database that records labour market and welfare policy measures introduced by the EU Member States. It has become one of the standard references in the employment field, providing information on adopted reform measures and their key design characteristics. The database is managed by the European Commission in cooperation with the Employment Committee (EMCO). To date, it provides information on the reform measures passed in the EU between 2000 and 2018.

The measures reported refer to enacted legislation, as well as other executive or administrative acts and social agreements likely to have an impact on labour market outcomes. The database does not record planned reforms or draft bills, nor recurrent decisions by the government (i.e. annual increases of minimum wage), unless they represent an historical change or a break in the usual practice. A single piece of legislation may cover several policy areas, and may consequently result in several measures recorded in LABREF.

The database records the main features of the reforms, including, among others, a short description of the content of measure, the year of adoption, the timing of implementation, the scope and the direction. For more information about the criteria adopted for the data collection, see the LABREF User Guide.

The LABREF database can bring useful insights in the study of labour market reforms, and be used to better understand policy dynamics in this policy field across Europe. It allows cross-country horizontal analysis on the pace and type of measures enacted in a particular year, as well as the tracking of measures over time, thus resulting in an invaluable source of both qualitative and quantitative information for multi-annual assessments of reform strategies, thematic reviews, analytical reports, country-specific recommendations, etc.

The following figures aim to illustrate the analytical potential of the database.

Figure 1: Total number of labour market measures adopted by EU Member States (by country, by policy domain, in total for the period 2000-2018) 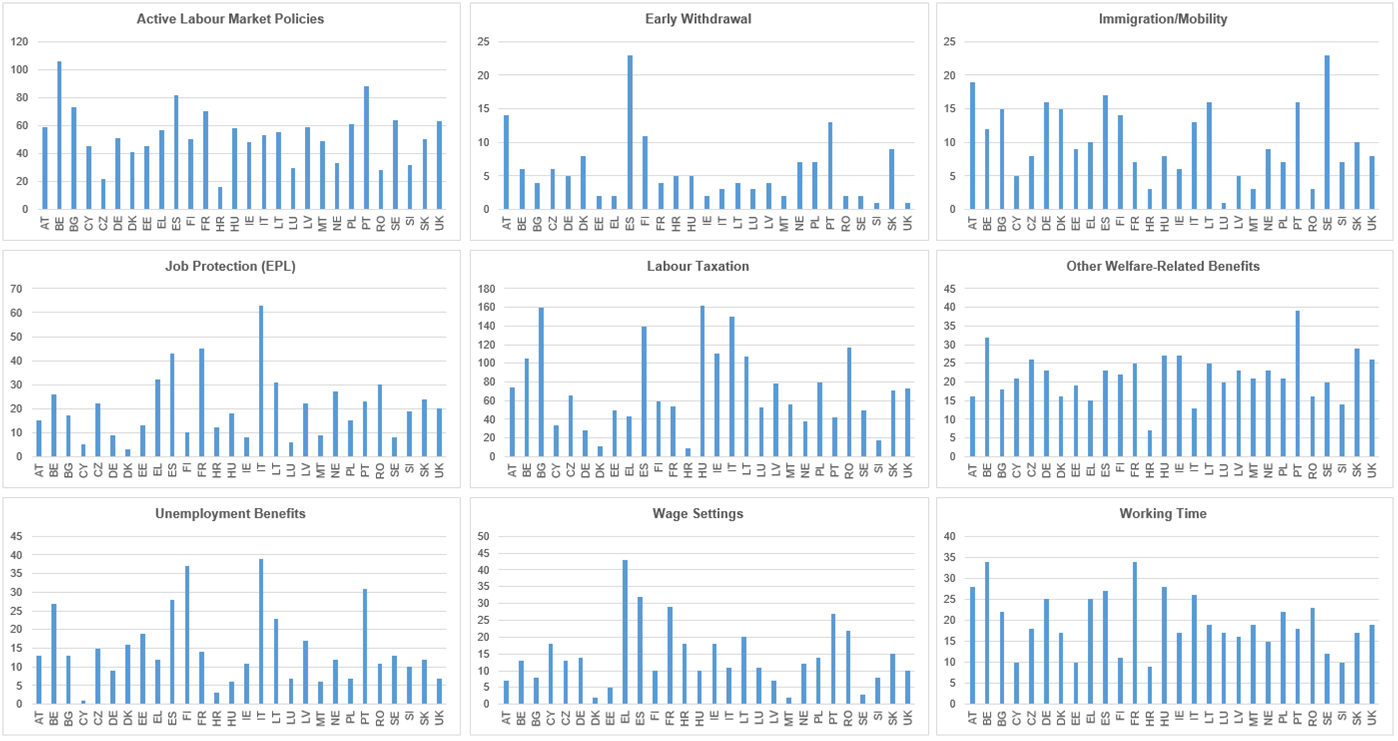 As Figure 1 shows, the database allows comparing the policy trends and reform activity across EU countries during a certain period (in this case, the years 2000-2018). The height of the bars under each policy domain indicates the total number of reforms carried out by each Member State in that specific domain. A first look at the graphs reveals, for instance, that the frequency of policy interventions varies considerably across policy domains and countries. Overall, in the period under review, most reforms appear having been undertaken in the domains of active labour market policies or labour taxation, while early withdrawal, immigration or mobility reforms are relatively infrequent. 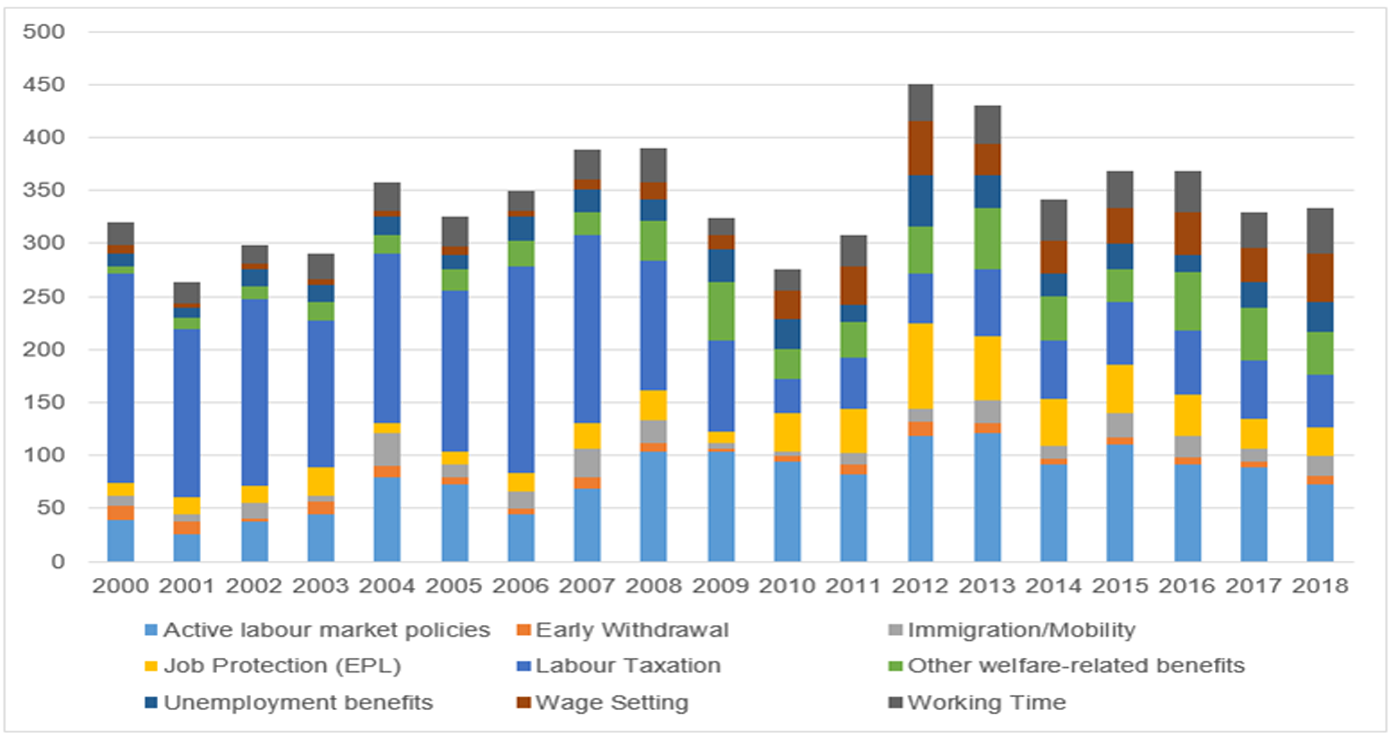 Figure 2 shows the evolution of the total number of measures by year for all EU countries, broken down by policy domain. This allows, for instance, the identification of periods of increased or decreased reform activity in certain policy domains (e.g. domains with macro-structural relevance, such as employment protection legislation (EPL), labour taxation, or wage-setting frameworks), as compared to overall reform activity and other policy domains in a given year.

Figure 3: Breakdown of distribution of labour market measures adopted by EU Member States by policy field (for the period 2000-2018): ALMPs and Other welfare-related benefits 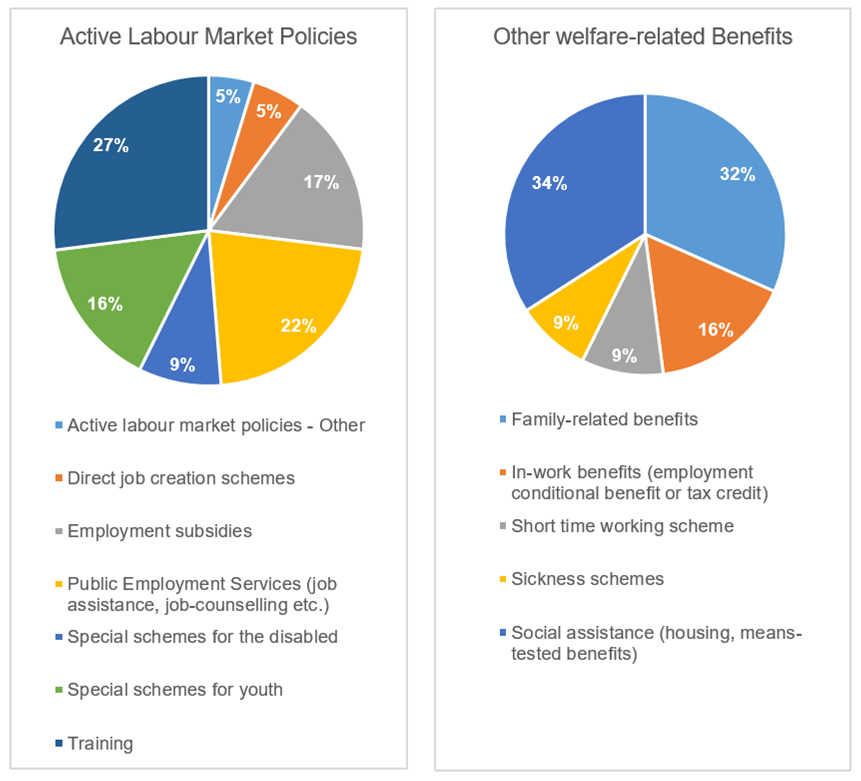 For Figure 3, two policy domains have been selected to illustrate the distribution of reforms within these broad policy fields, which allow us to obtain a more detailed picture of reforms patterns and trends. The graphics show interesting insights: most of the welfare-related measures (other than unemployment benefits) undertaken in the EU Member States over the period 2000-2018 (66%) are related to family benefits (level, duration, coverage and eligibility) and social assistance (level, duration, coverage and eligibility of housing benefits or means-tested benefits). Likewise, roughly half of ALMP’s undertaken in EU Member States fall in the public employment services (PES) and training policy fields. 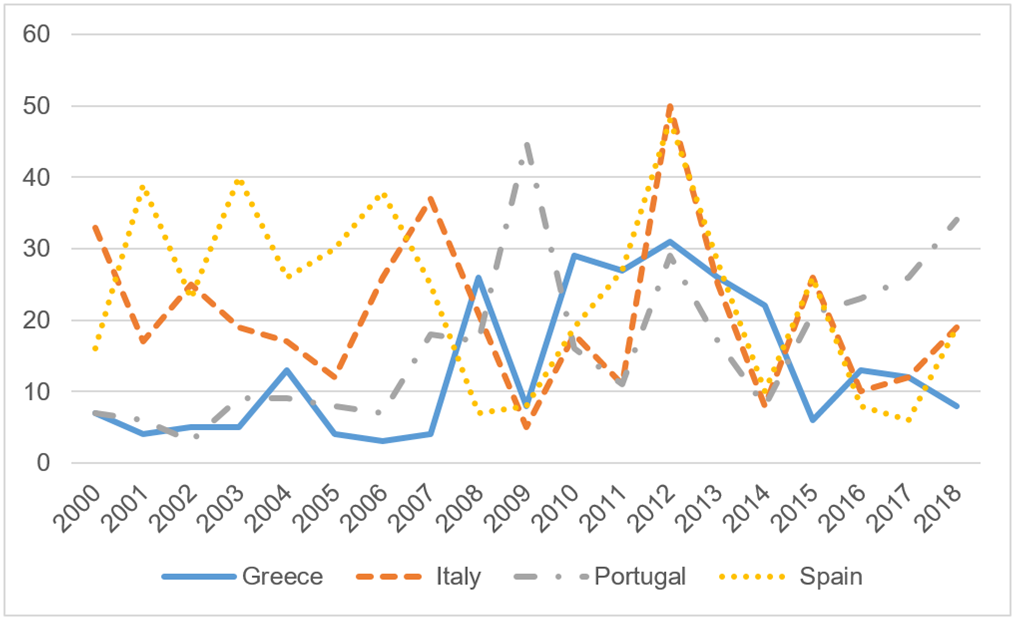 Finally, the information from LABREF can be an efficient tool to carry out comparative analysis for a particular group of Member States and/or for different country groups (i.e.: trends on reform activism in Southern and Nordic countries). The level of intensity of reform activity as well as differences on distribution of reforms across policy domains can be analysed using the database, reflecting the fact that the timing and domain of reforms is linked to the main features of existing EU Member States’ labour market institutions.

Information available in the database

LABREF covers policy measures undertaken in EU Member States from the year 2000, with the following exceptions:

From the year 2020, there is no further update of adopted reforms in the United Kingdom.

The publication of the data generally takes place during the last quarter of the year following the year under consideration.

When quoting, thank you for including the link to the database and the following reference:

No related news in the last six months.

More on this topic