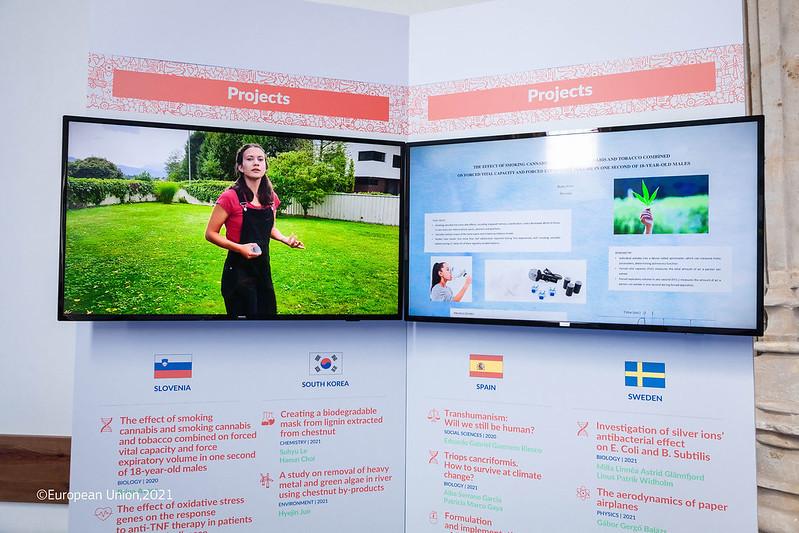 A total of 158 contestants between the ages of 14 and 20 from 34 countries in Europe and abroad competed for 18 first, second and third place prizes.

On 19 September in Salamanca, Spain, the first-ever hybrid European Union Contest for Young Scientists (EUCYS) rewarded and celebrated the best young scientific talent that Europe has to offer.

The 32nd edition of the EUCYS Awards Ceremony was unlike any of its predecessors. Combining both 2020 and 2021 because of COVID-19, this hybrid event gathered 158 of the brightest young minds between the ages of 14 and 20 from 34 countries in Europe and abroad. A virtual space was created for the students to get to know each other and discuss their projects.

Competing either individually or as teams, the contestants presented their projects in any scientific field completely online to a panel of 25 international judges. The most represented categories were computing (16%), engineering (15%), biology (13%), physics (13%) and the environment (11%).

In addition to the cash prizes, several contestants received an all-expenses-paid trip to London to attend the London International Youth Science Forum in the summer of 2022. Other prizes include stays at leading scientific organisations, such as the European Organization for Nuclear Research, the European Space Agency and the Joint Research Centre.

EUCYS truly highlights the top achievements of science students. All participants have previously won first prize in their home countries’ national science competitions. Projects must be nominated by the national organiser in each participating country.

Carla Caro Villanova, a 17-year-old physics student at the University of Barcelona, Spain, wants to become a researcher in quantum physics or similar field. She earned first place for the project “Formulation and implementation of a support vector machine on D-Wave’s quantum annealer”. 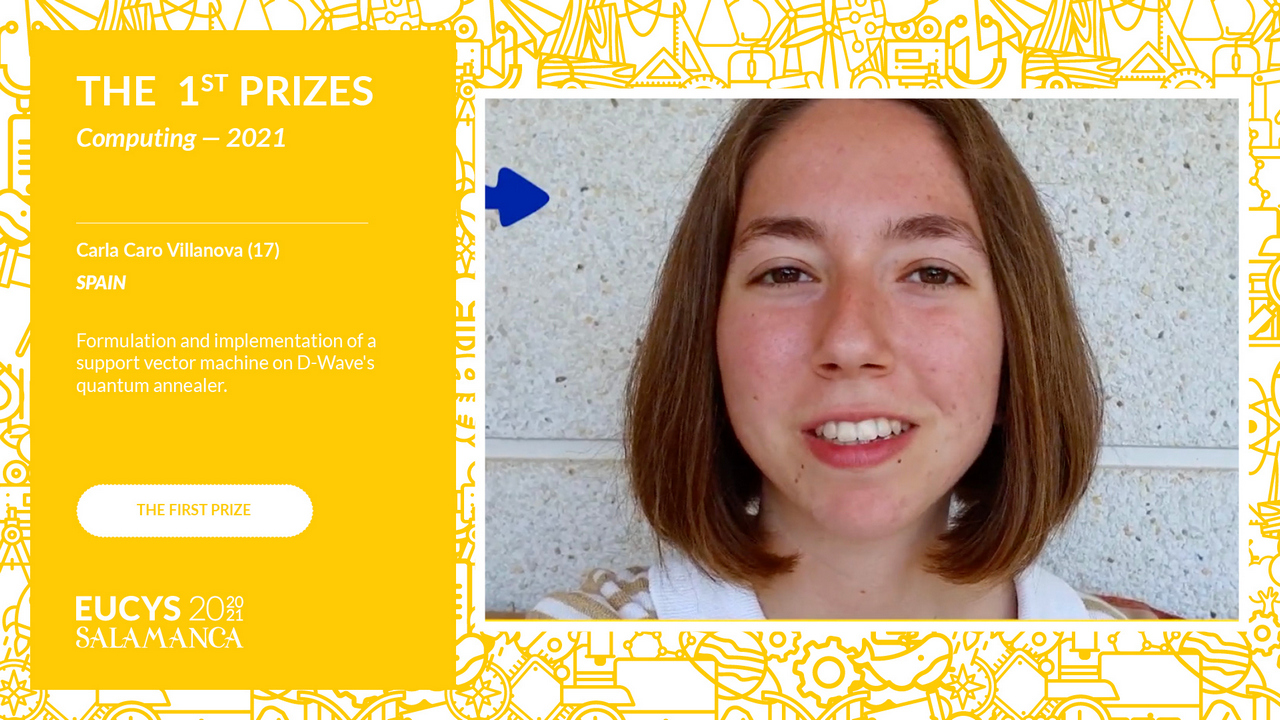 Carla described the project as follows: ‘It consists of executing a machine learning algorithm in a quantum computer. Machine learning is a field of computer science in which the own algorithm “learns” from data and tries to find patterns so as to model it. For example, it can be used to classify medical data and distinguish between non-cancerous and cancerous tumours, just as I did in this project. Regarding quantum computing, I used an actual quantum annealer, which is a type of computer based on the laws of quantum physics. Quantum properties may bring many advantages and revolutionise technology in the near future. Indeed, in my own project, I compared the quantum algorithm with the classical one to assess the current performance of a quantum annealer. However, I could not prove any quantum advantage yet. Nevertheless, there is much room for improvement in the field, and I genuinely believe that quantum computers will outperform classical computers sooner than we expect.’

Carla explained what got her interested in this domain. ‘Two years ago I came across physics, specifically quantum physics, during a summer stay at the Institute of Photonic Sciences in Barcelona. It was then that I knew I wanted to do research in this field for a living. I kept on studying quantum mechanics on my own and contacted the research group Barcelona Supercomputing Center, who gave me more resources to pursue my project.’

It is very important to give visibility to women in science and recognise their work so as to inspire and encourage them. They have the same capacity to reach their goals in research.

Women in science, technology, engineering and mathematics (STEM) are underrepresented. How can we get more young women to choose STEM fields? ‘I believe young women should be encouraged to get involved in STEM from a very early age without making a distinction between them and their male counterparts,’ said Carla. ‘It is very important to give visibility to women in science and recognise their work so as to inspire and encourage them. They have the same capacity to reach their goals in research.’

She thinks the EUCYS award can be a stepping stone. ‘Given that it came from a globally renowned competition, I believe and hope it will open the door to other opportunities in the future.’

For AI to be interpretable, explainable, human-centric and transparent, it needs to be as similar as possible to human thought.

Viktor explained the project in practical terms: ‘Current AI systems can help us identify objects on the road or translate text. However, what they lack are notions like “cause and effect”, or concepts such as “object” or “action”. For AI to be interpretable, explainable, human-centric and transparent, it needs to be as similar as possible to human thought. So we need it to learn some “core knowledge”, the ideas that make us intelligent. In my project, we combined the most novel interdisciplinary approaches, ranging from engineering feats in fast hardware computation to a variety of AI techniques, theoretic statistical analysis and approximation theory. This was done to derive a package solution for training AI that sets a new state of the art for a data set of logical puzzles, similar to an IQ test.’ 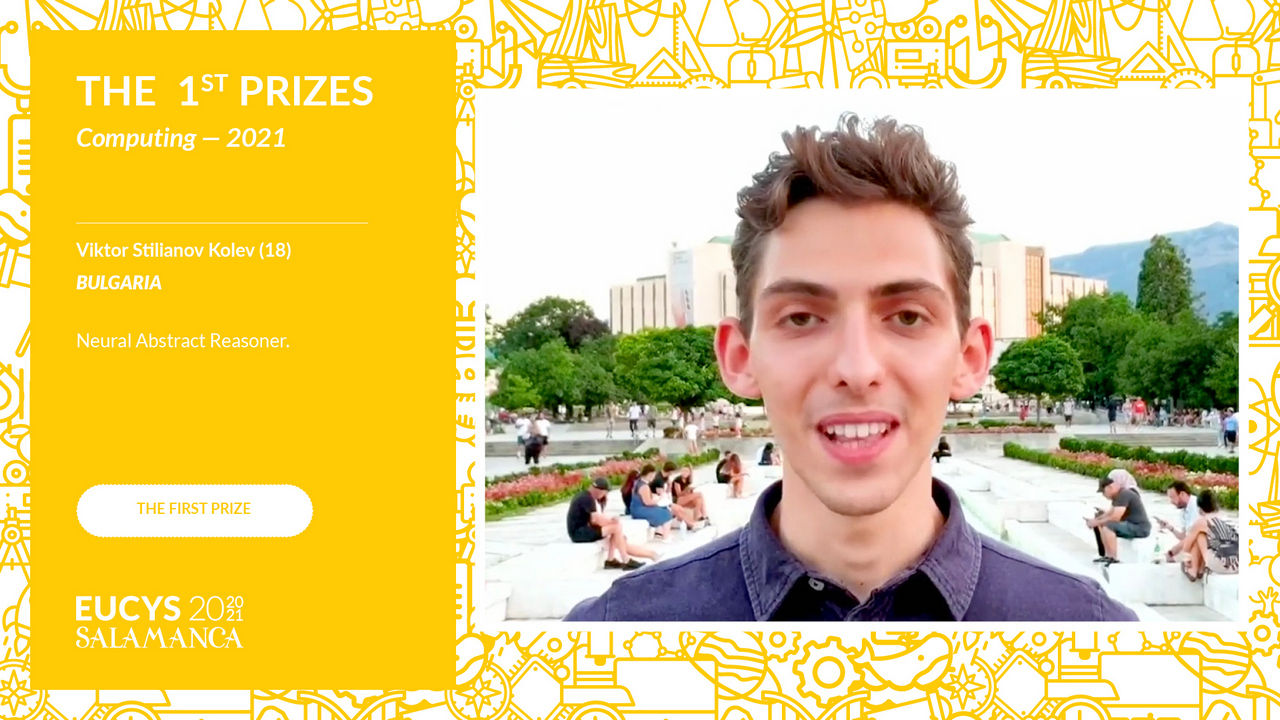 Viktor’s motivation for pursuing the project goes back many years. ‘Back in second grade, I participated in my first mathematics competition, where I had to solve a set of logical problems. When I came across the Abstraction and Reasoning Challenge in my project, it immediately clicked with me that these problems are not too different from the ones I was trying to solve back then – only now I had to do it with AI. Furthermore, it is a wonderfully rewarding intellectual task to ask yourself questions like “What is the quintessential human knowledge?”, or “What makes human thought intelligent?”. And then it is an equally rewarding engineering feat to actually implement these ideas in the context of AI.’

Attracting more young people to science is a question of opportunity, says Viktor. ‘Science is an ultimate form of formalised curiosity, which is an all too human trait. Therefore, people, especially young people, have an intrinsic drive for science. We only need to present the opportunity for them to follow this drive. In practice, this means more and more widespread initiatives such as EUCYS, more initiatives that make active research accessible, both in STEM and the humanities.’

He believes the EUCYS award will be instrumental in both his education and career ambition. ‘I feel empowered to continue doing research during my undergraduate and graduate education, and to pursue a career in academia. Going even further and beyond myself, I hope to empower others to follow their curiosity, to get involved in research. And I hope that EUCYS serves as a platform for young minds to share and exchange ideas.’

Set up in 1989 to promote the ideals of cooperation and information exchange between young scientists, EUCYS rewards and celebrates Europe’s finest in STEM.

This year’s edition was jointly organised by the European Commission and host University of Salamanca, Spain’s oldest institution of higher education.

EUCYS is co-funded under Horizon 2020.