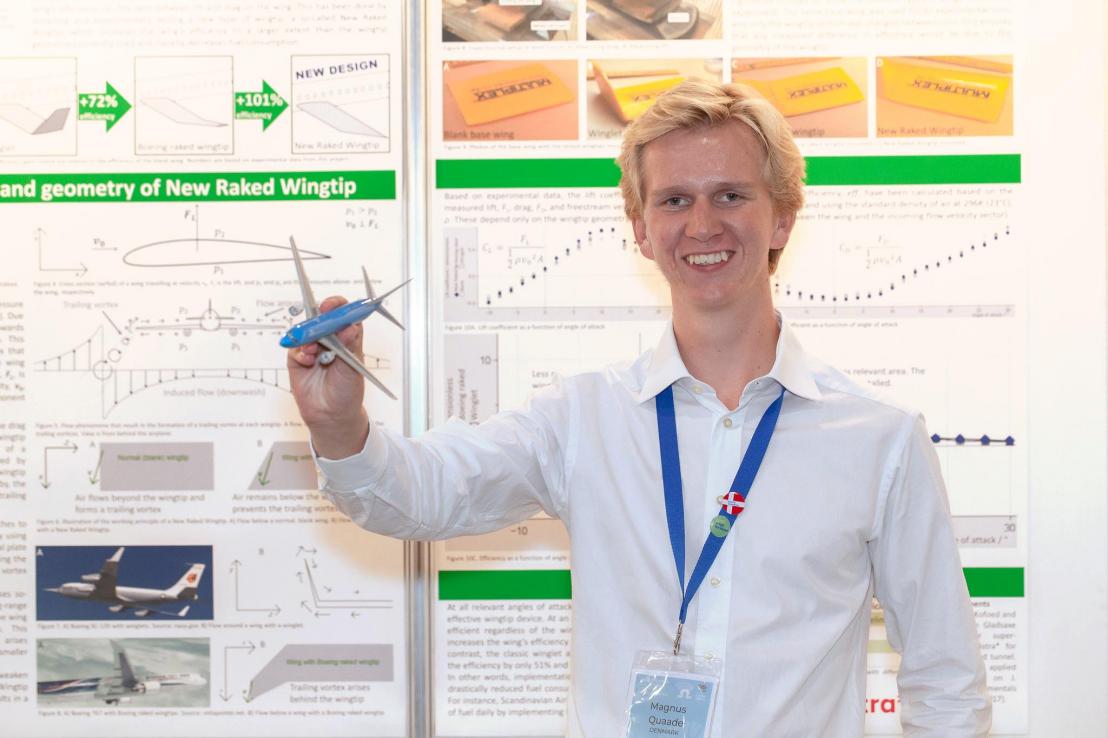 An alternative aeroplane wing tip dubbed ‘new raked’ that would make flying more fuel efficient has been awarded one of four €7,000 first prizes at this year’s European Union Contest for Young Scientists (EUCYS).

The Danish student behind the design, Magnus Quaade Oddershede, 19, said his model came out of a two-week project in his last year of high school where he decided to investigate the Boeing raked wing tip, the extension of the main wing which reduces drag.

‘I was investigating the design of the Boeing raked wing tip and the design of the winglet and how the three-dimensional (air) flow around the wing tip behaves,’ he said, speaking from the EUCYS awards ceremony on 17 September in Sofia, Bulgaria.

Oddershede came up with a device that he says visually resembles Boeing’s raked wing tips but has a sharper point. He says that his tests show that ‘new raked’, which reduces drag and maximises lift of the wing, could be more efficient than Boeing’s model.

‘It works by preventing air from making a curling motion around the wing tip, which means that the circulation that is left behind the wing is reduced dramatically and this in turn reduces the induced drag on the aeroplane,’ Oddershede said.

As a rule of thumb, he says, induced drag contributes to around 10% of the total drag of a modern passenger aeroplane. Reducing this can lead to a significant decrease in fuel burn and pollution.

The teenager says he’s always been fascinated by aviation and recalls playing with a model aeroplane from as young as five years of age. ‘The fact that you can make something that’s heavier than air, fly. I find that, just the concept, amazing.’

'My design could actually help with reducing the climate impact of aviation.'

Oddershede, who started studying physics at the University of Copenhagen at the beginning of September, says his concern about climate change also motivated him to work on the wing tip design.

So far, he has only tested his alternative wing tip in a low-speed wind tunnel at a scientific centre for high school students. He hopes to run more proof of concept experiments and to optimise his model. To do this, he says he needs to gain access to a high-speed wind tunnel. ‘I hope that that (winning first prize) will give me an advantage when applying for the use of those wind tunnels,’ he said.

First prizes were also awarded to Alex Korocencev and Felix Christian Sewing, both 18, from Germany for their prototype of a magnetic hoverboard inspired by the 80s sci-fi film Back to the Future II, and Ireland’s Adam Kelly, 17, for new tools to optimise quantum computing simulations.

The fourth first prize went to 17-year-old researchers Leo Li Takemaru and Poojan Pandya from the US who studied the role of the protein Coiled-Coil Domain Containing 11 (CCDC11) in HIV. Their work looked at how the protein could inform future antiviral therapies.

Carlos Moedas, European Commissioner for Research, Science and Innovation, congratulated the winners for their ‘outstanding achievement’.

‘I am convinced that we will see many of the 154 participants hitting the headlines in the coming years with breakthrough discoveries and innovations,’ he said.

What is the European Union Contest for Young Scientists (EUCYS)?

EUCYS is an annual competition bringing together the best young science minds, enabling them to compete, cooperate and exchange ideas with their contemporaries and also connect with Europe’s most prominent researchers.

Entrants are individuals or teams of up to three people who have previously won first prize in a national science competition and have been nominated by a national organiser. The projects can cover any field of scientific endeavour and all participants should be aged between 14 and 20 at the date of the contest. Participants are from EU Member States and countries with a science and technology agreement with the EU.

Projects are judged by at least five jury members for originality and creativity, the skill, care and thoroughness in how a project has been followed through from conception to conclusion, reasoning and clarity in results interpretation, and how well the study is presented.

The 31st edition of EUCYS featured 154 contestants aged 14 to 20 from 40 countries. Most of the young scientists were European but also came from countries including Egypt, South Korea, and Turkey. Thirty-four projects received awards.

Researchers are now investigating how feasible this is.
END_OF_DOCUMENT_TOKEN_TO_BE_REPLACED