The story of a new skin 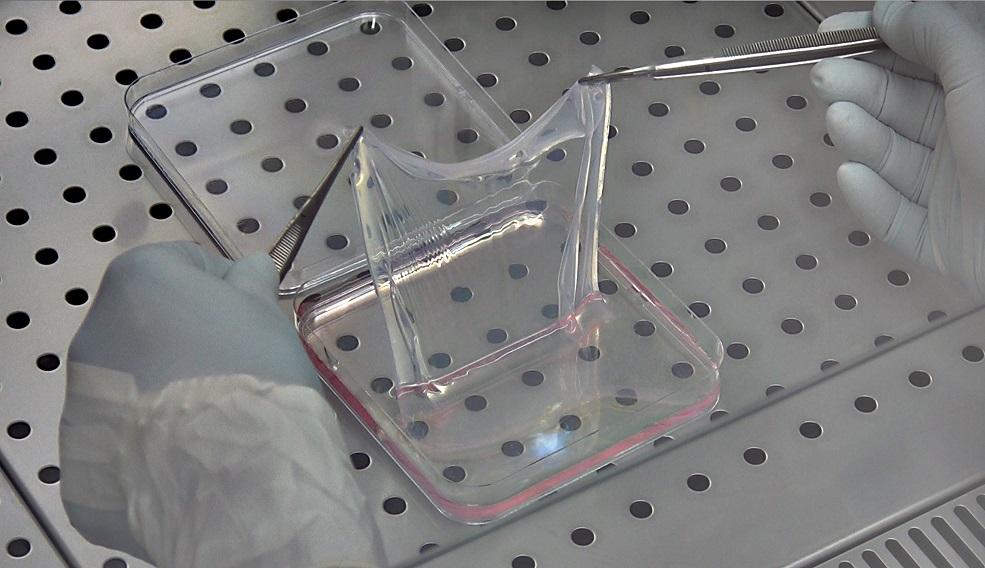 Decades of scientific research into areas including plant genetics and data science helped doctors successfully carry out an experimental therapy to create a new skin for a seven-year-old boy suffering from a rare genetic disorder.

Hassan’s doctors had never seen anything like it: a seven-year-old who had lost almost all of his skin due to a rare genetic disorder. By the time he was admitted to the Burns Unit of the Children’s Hospital in Bochum, Germany, the young patient had developed life-threatening bacterial infections.

Born in Syria, Hassan had been suffering from Epidermolysis bullosa (EB) since birth. The condition affects the sticky proteins that bind the outer layer of skin, known as the epidermis, to the dermis, the thick layer beneath which contains blood vessels, hair follicles and sweat glands.

‘Kids with EB are known as butterfly children because their skin is very fragile,’ said Professor Michele De Luca from the University of Modena and Reggio Emilia, Italy. ‘They endure painful blisters and skin loss after even minor grazes.’

Hassan's father said that he first noticed a blister a week after Hassan was born. Credit — Ruhr-Universität Bochum

Prof. De Luca, an Italian expert who has worked for 30 years to engineer replacement tissues, was called in by paediatricians in a last-ditch attempt to save their gravely ill patient. After a skin graft using tissue from the boy’s father had failed, the German hospital urged Prof. De Luca to pull together everything he knew about stem cells to make a replacement outer layer of skin.

It was a tall order. Around one square metre of tissue would be needed – far more than had ever been grown for transplantation to a single patient.

Growing a large population of cells fit for transplantation is no mean feat. The work drew on decades of groundwork as well as several current projects. Prof. De Luca credits the EU-funded OPTISTEM project with contributing to the use of gene therapy and stem cells for degenerative diseases. Private funds and financial support from the Regione Emilia Romagna POR-FESR – a European Regional Development Fund – helped to bring the science to the clinic.

Another study, SKINTHERAPY – which was completed 10 years ago – moved the field forward by developing rules, known as protocols, for the use of stem cells in animal models and in clinical trials. ‘These protocols are required by regulators and are essential to establishing clinical trials,’ said Guerrino Meneguzzi of the University of Nice, France, who led the project.

Prof. De Luca had first transplanted small patches of skin grown from stem cells almost a decade ago but trials had stalled. Shortly after their first study in humans, regulators decided that every cell grown in a lab must meet the same exacting standards demanded of medicines. Prof. De Luca’s university spent years building and certifying a pharmaceutical-grade production facility suitable for growing human tissue.

In 2015, the Italian group resumed gene therapy trials but Hassan did not meet the inclusion criteria for the study. However, there was no time to wait. His doctors secured approval for compassionate use of the experimental therapy, arguing that his condition was grave.

‘We jumped five years ahead in an effort to save a gravely ill patient.’

‘As the child would not survive without treatment, we were justified in trying to save his life,’ said Prof. De Luca. ‘We jumped five years ahead in an effort to save a gravely ill patient.’

There were still several hurdles to clear for the experimental therapy to work. Not only did the researchers have to take a sample of skin from the patient, grow a large volume of tissue, safely transport it to Germany and then transplant it, they needed the new skin to be free of EB. Otherwise, it would break away just as the boy’s epidermis had before.

Racing against time, Prof. De Luca’s team genetically modified the lab-grown tissue to ensure that it was not affected by EB. To do this, he turned to geneticist Professor Michele Morgante at the University of Udine, Italy.

Prof. Morgante leads an EU-funded project on the genetic code of plants called NOVABREED, which has developed new ways of analysing where genes are inserted when they are transferred from one plant to another.

‘We have known one another for years so he asked us to analyse the genome of the child’s stem cells,’ said Prof. Morgante.

‘Even though the two fields appear unconnected, our methods allowed us to identify where the gene was inserted, to check for potential problems, and to study the stem cell population that led to the exciting end result of saving the life of the child.’

There was also a role for bioinformatics – the use of computer power to interpret biological data. Knowhow from DENOVOSTEM, an EU project led by Professor Stefano Piccolo at the University of Padova, allowed scientists to map sites on the genome where new genes have been incorporated.

‘There are strong synergies between our project and De Luca’s regenerative medicine group,’ said Prof. Piccolo. ‘This computational strategy informed his work on the epidermis.’

Prof. De Luca said that the work highlights the importance of fundamental research. ‘The amount of basic science behind this work is tremendous. This is an emerging field and there is a temptation to expect a magic bullet without doing the deep and substantive work that underpins it.’

Thanks to this multidisciplinary, pan-European collaboration, supported by EU projects and significant private investment, doctors completed the transplant and held their breath to see how their patient would respond.

Within weeks he was well on the road to recovery. The new outer layers of skin knitted into the underlying tissue. Crucially, as time passed, the stem cells in the genetically engineered skin began to regenerate and replace lost cells – just as in normal tissue. Two years on, the boy is in good health and enjoys playing football like many other children his age.

‘We are very happy with the results - it felt like a dream for us,’ said the boy’s father in an interview at Ruhr Universität Bochum, Germany. ‘Hassan feels like a normal person now. He plays, he’s being active, he’s enjoying his life and he’s not the way he was before. I hope that children all over the world will be able to be treated in the same way.’

After the transplant, the cells in the new skin began to regenerate and replace lost cells, just as in normal tissue. Credit — Ruhr-Universität Bochum

The case was reported in the journal Nature and sparked a media frenzy. For the team behind the breakthrough, it is a triumph that carries a note of caution.

‘We must be very careful to avoid thinking that the problem is solved,’ said Prof. De Luca. ‘Only three patients have benefited from this kind of skin transplant and all three had Junctional EB – a rare form of a rare disease.’

Early trials are already under way in patients with more typical forms of EB but there is much work to do. ‘Success in these patients cannot be taken for granted as there are different genes involved. There is still a long way to go.’

Expert networks have played a crucial behind-the-scenes role in helping Europe keep pace with global advances in stem cell science. Prof. De Luca has been an enthusiastic participant in a group called EuroStemCell, sharing his expertise and tapping into the latest findings from a fast-moving field.

EuroStemCell, which covers all types of stem cells, began as a research project linking 27 European labs. It is now an established virtual institute of researchers, social scientists and patients with more than 400 stem cell and regenerative medicine labs across Europe and a strong focus on public engagement. It is funded by the EU and publishes information for the public in six languages.

‘EuroStemCell has been extremely beneficial for stem cell researchers and accelerated progress in Europe,’ said Professor Clare Blackburn, University of Edinburgh, UK, and coordinator of the EuroStemCell network. ‘Prof. De Luca’s achievement is really outstanding and represents a fantastic advance for the field. It reflects his rigorous, consistent work in basic science and the clinical translation of stem cell science.’

Insects, microorganisms and earthworms are on the job.
END_OF_DOCUMENT_TOKEN_TO_BE_REPLACED