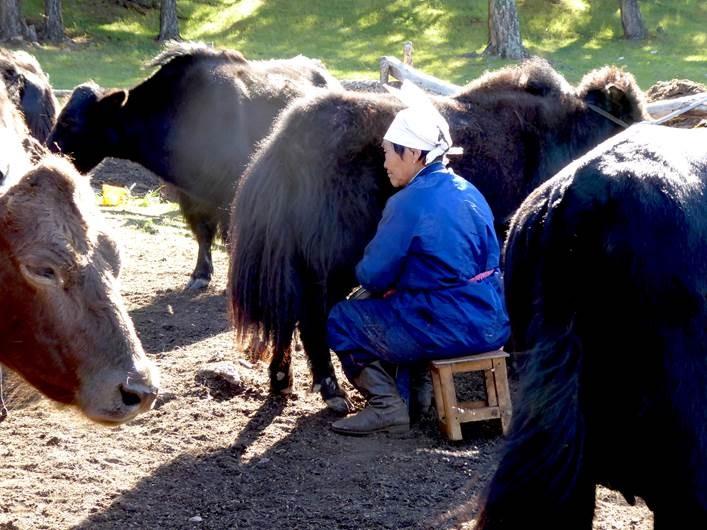 Studying the culture of Mongolian herders may help crack the mystery of why humans started consuming animal milk before populations evolved to be able to digest it. Image credit - Matthäus Rest

Dairy has been central to people’s existence since at least 6,500 years BC.

But a mystery lies at its heart which, if solved, could help explain the rising number of modern dietary problems ranging from food intolerances to allergies, researchers say.

Scientists are trying to explain why people began consuming animals’ milk before they developed genetic mutations which enabled them to digest it properly.

The mutations mean people produce lactase - an enzyme which breaks down milk sugars, called lactose - after they reach adulthood. Without the mutations, lactase production stops in childhood, which can lead to lactose intolerance.

‘There is at least a 4,000 year gap between when we see the earliest evidence of dairying and when we see first the evidence of any mutations anywhere in the world,’ said Professor Christina Warinner, head of microbiome sciences at the Max Planck Institute for the Science of Human History in Jena, Germany.

Only about 35% of the world’s population today have lactase persistence mutations. They exist mainly in European populations – especially northwestern Europe – and their descendants, and in parts of the Middle East, sub-Saharan Africa and South Asia.

‘If we can work out the evolutionary history and mechanics of lactose intolerance (how diet, human genetics, and gut microbes interact), we will have a powerful model for how to tackle other complex digestive disorders and food allergies,’ said Prof. Warinner.

Studying the dairy heritage and gut bacteria of a group of people who do not have lactase persistence – Mongolian herders – may help crack the dairy mystery.

‘They have been dairying in Mongolia for thousands of years, yet today the people of Mongolia do not have the mutations that allow them to produce lactase,’ said Prof. Warinner, who heads a project investigating Mongolia’s dairy history, called DAIRYCULTURES.

Mongolians milk a wide variety of animals – horses, yaks, sheep, camels, cattle, goats and reindeer – and create many different products including vodka made from yak yoghurt, and a dried curd that can be stored at room temperature for up to two years.

Microbes use up the lactose when converting milks into yoghurt or cheese. European hard cheeses like parmesan contain almost no lactose, for example.

‘The reason people were able to eat dairy before we had the ability to process lactose is because of fermentation,’ said Cheryl Makarewicz, professor at the University of Kiel, Germany.

‘It shows the power of this kind of processing and how it can impact how your body reacts to different foodstuffs,’ she said. Fermented foods contain microbes which may also play a part in people’s digestion.

Microbes in people’s guts may have also evolved to break down the lactose. ‘This hasn’t been well studied … It’s something we’re trying to test,’ said Prof. Warinner.

To do this, Dairy Cultures scientists are exploring the microbiome, the genetic makeup of microbes that live in the gut, which include bacteria, viruses and fungi. They are studying samples from herders to see if they contain elevated levels of microbes that aid milk digestion. 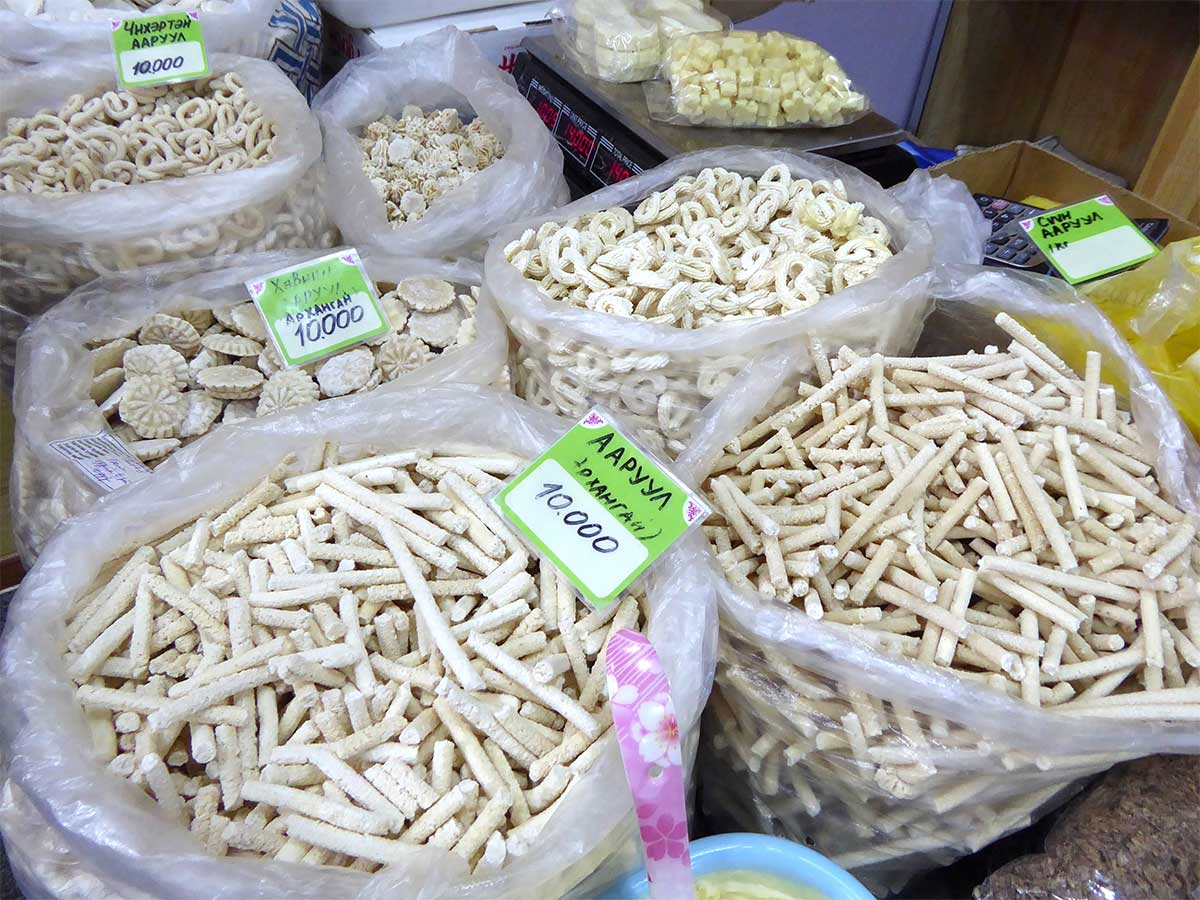 The consumption of dairy - a source of food that helped people cross vast grasslands - is likely to have caught on as a survival mechanism. Image credit - Christina Warinner

The earliest evidence of dairy use was found in pottery samples from Anatolia, in what is modern day Turkey. They date back to about 6,500 BC.

Dairying spread south from the Middle East to Africa by 3,000 BC, and across Asia to Mongolia before 1,300 BC.

Before that, in the 6th millennia BC, early Neolithic cattle farmers spread their lifestyle across Europe with dramatic consequences.

The shift for Europe’s peoples from hunting and gathering to cattle farming reshaped prehistoric European culture, biology and economy, says Professor Richard Evershed of Bristol University in the UK. He studied the Anatolian pottery and heads a programme called NeoMILK, which investigates the spread of Neolithic cattle-based agriculture and of dairying across Europe.

The transformation ultimately resulted in the spread of dairy economies globally, and the development of lactase persistence mutations in Europeans, he says.

‘These people changed us as Europeans to be genetically different from the rest of the world by the decision they took to do dairy farming,’ he said.

The consumption of dairy is likely to have caught on as a survival mechanism.

Milk is rich in proteins, calcium, sugars and fats and, once processed, becomes a source of food that can be eaten throughout the year. It helped people to cross deserts and vast grasslands.

‘Dairy offers a new world in terms of subsistence. It means that your animal (becomes) a renewable resource … and you can eat dairy (in the form of cheese or curds) all year round,’ said Prof. Makarewicz, who heads a programme called ASIAPAST, which is investigating the spread of pastoralism across the Eurasian steppe and the diets of early Eurasian herders.

The advent of dairy also changed people’s daily routines, which is likely to have had a major impact on how people interacted with each other and, ultimately, the ways in which societies were organised, she says.

Animals have to be milked once or twice a day, and the milk processed immediately. This takes several hours and in traditional societies, including Mongolian herding communities, it is mainly done by women, keeping them tied close to the animals.

‘In a pre-dairy era, maybe women roamed further,’ said Prof. Makarewicz, who has lived with Bedouin tribes in Jordan and with Mongolian herders.

The women’s legacy is substantial: by painstakingly processing the milk each day, small-scale dairy producers around the world have domesticated dozens of different types of microbes.

‘In some cases, we think these microbes have been in continuous cultivation for millennia,’ said Prof. Warinner.

Most of them have not been studied so their functions are unknown, including their possible role in enabling people without lactase persistence mutations to digest milk, she says.

And they are rapidly being stamped out and replaced with industrial strains through development programmes, industrialisation, and state level organisation of dairy production, says Prof. Warinner.

The few microbes used in the industrial production of yoghurts and cheeses are all grown in European laboratories, she adds.

Prof. Makarewicz says the rise in food intolerances over the past couple of decades have to do with the way food is processed in the West.

The processing exposes people to chemical additives not normally encountered outside a laboratory, and often cuts the amount of fibre in foods which in turn changes the way people metabolise their food. And food factories have high standards of cleanliness, which means food contains fewer bacteria and other microbes, she says.

‘We don’t know yet what the outcome for that is for the human body,’ Prof. Makarewicz said. ‘(Now is) a really interesting period in terms of human dietary evolution,’ she added.

In order to make cheese from milk, cheesemakers add bacteria to the milk. These bacteria feed on the milk sugars, the lactose, and produce lactic acid. Some bacteria strains also release carbon dioxide, alcohol and other flavour inducing compounds.

After the fermentation process, the remaining product is coagulated into cheese curds while the remaining liquid, the whey with most of the lactose, is drained. In hard cheeses such as parmesan or cheddar, very little moisture is kept before the cheese is allowed to age and another type of bacteria is added. This type contains high levels of lactase, the enzyme that further breaks down lactose.

When making soft cheese, not all of the whey is drained, leaving more lactose behind. These younger varieties are also not treated with the additional lactose-eating bacteria given to cheese that needs to harden and mature.