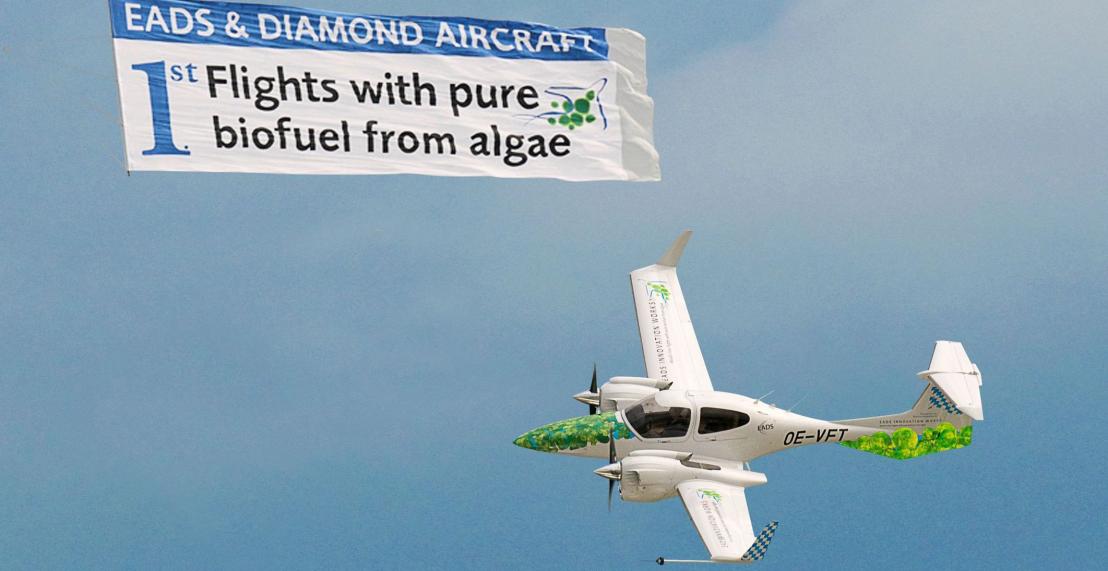 Biofuel can be produced from algae. At the Farnborough Airshow 2010, the European Aeronautic Defence and Space company (EADS) showcased flights of an aircraft powered by pure biofuel made from this resource. © EADS

Car fuel made from agricultural waste could help cut down carbon usage without taking up land that is used to grow food. It is one innovation that could help the biofuels industry shift up a gear.

Once seen as a benign source of energy, biofuels have triggered concern over the amount of land needed to produce them – land that might otherwise be used to grow food at a time of continued world population growth.

Last year, the European Commission proposed a revision of its 10 % target for the amount of transport energy that has to come from renewable sources by 2020. It said that only half of this, or 5 % of total transport energy, should come from food crops.

However, a new and more efficient generation of biofuels can either use waste from agricultural production, such as straw, instead of products that can be eaten, or plants that grow on poor-quality land that is unsuitable for food production. Some varieties will be so similar to conventional fuels that they will go straight into existing car and aeroplane engines.

‘The fuel versus food debate is too simplistic,’ Máire Geoghegan-Quinn, European Commissioner for Research, Innovation and Science, said at an EU-organised conference on the bioeconomy in February in Dublin. ‘We don’t have to choose between them.’

One of the biggest problems in developing so-called second-generation biofuels is that the material is usually harder to process than the edible parts of crops, and requires the development of advanced enzymes.

As part of efforts to develop second-generation biofuels, an EU project, SEAWEED AD, is exploring how to use fermentation to make fuel from seaweed.

‘The fuel versus food debate is too simplistic. We don’t have to choose between them.’

A number of biotech companies are also making progress with second-generation biofuels, and some think they are on the brink of producing a commercial product.

Danish biotech company Novozymes thinks that from 2015 it will be able to pull in EUR 150 million in annual revenue from sales of such enzymes needed for fuel production. Sometime after 2020, the figure could be 10 times as much.

Equilibrium with the environment

Biofuels first became popular during the 1970s oil price rises as they presented a way to reduce dependence on exports from a small club of oil-producing states. Troubles in the Middle East this century have further boosted their appeal.

Nowadays, though, the key attraction is that biofuels appear to be in equilibrium with the environment. Burning fossil fuels, such as coal, oil and gas, converts carbon buried in the ground into carbon dioxide, which is expelled into the atmosphere. Fossil fuels that accumulated over millions of years have been burned in just a couple of centuries since the start of the Industrial Revolution, and demand is increasing from the more than one billion cars on the world’s roads.

Biofuels, by contrast, are frequently made from plants - meaning that many of the molecules of carbon dioxide given off when they burn were previously removed from the atmosphere during photosynthesis as the plant grew.

‘We must invest in biofuels that achieve real emission cuts and do not compete with food,’ said Connie Hedegaard, European Commissioner for Climate Action. ‘Future increases in biofuels must come from advanced biofuels. Everything else will be unsustainable.’

Winners of the 32nd edition of the European Contest for Young Scientists explain how reimagining machines can change our future.
END_OF_DOCUMENT_TOKEN_TO_BE_REPLACED