The robots weeding organic farms and patrolling for greenhouse pests

Robots that use artificial intelligence to recognise the health of fruit and vegetable crops and when they’re ready to harvest are being trialled to help small, organic and greenhouse farmers with weeding and patrolling for pests.
By  Anthony King
People working on small farms often find they have back problems after a few years, say researchers who are developing a robotic farming aide. Image credit - Sony computer science laboratories

These robots can take on arduous tasks and help farmers save time. By spotting disease or pests early on, they can help cut down on the use of pesticides and reduce plant losses.

In Europe, land for agriculture is shrinking in part because of urbanisation. Meanwhile, there is a need for greener and more sustainable food production that uses fewer agrichemicals, which are costly and can pollute waterways. Alternatives to industrial monocrop farming include small and organic farms, market gardens – which sell produce directly to consumers or restaurants – as well as commercial greenhouses.

But small farmers struggle with back-breaking manual work. And the machinery companies that make the expensive machines for large farms to sow and harvest single crops have traditionally ignored the needs of smaller growers.

Researchers, however, are now figuring out ways to help small farmers be more productive and profitable in the long term.

‘Micro-farms are profitable and economically sustainable, but growers often struggle after around four years, as people develop back problems,’ said Jonathan Minchin at the Institute for Advanced Architecture of Catalonia in Barcelona, Spain, who leads a project called ROMI which built a farm helper robot.

The roving wheeled ‘ROMI’ has one arm for weeding small vegetable farms. Organic farmers spend about one-fifth of their time weeding, says Minchin, so developing a robot that could relieve people of this task was a key aim.

‘This robot is made for small farms, not big farms. There is a huge need for this type of tool,’ said Dr Christophe Godin who is a research director in plant modelling and computer science at Inria (the French National Institute for Research in Digital Science and Technology), who is also involved in the project.

To benefit small farmers, the robot had to be inexpensive and lightweight. ROMI’s developers worked to keep its costs down by fitting it with off-the-shelf electric wheelchair motors and relying on open source hardware and software for AI and navigation, for instance. Once available, it should cost €5,000 or less. 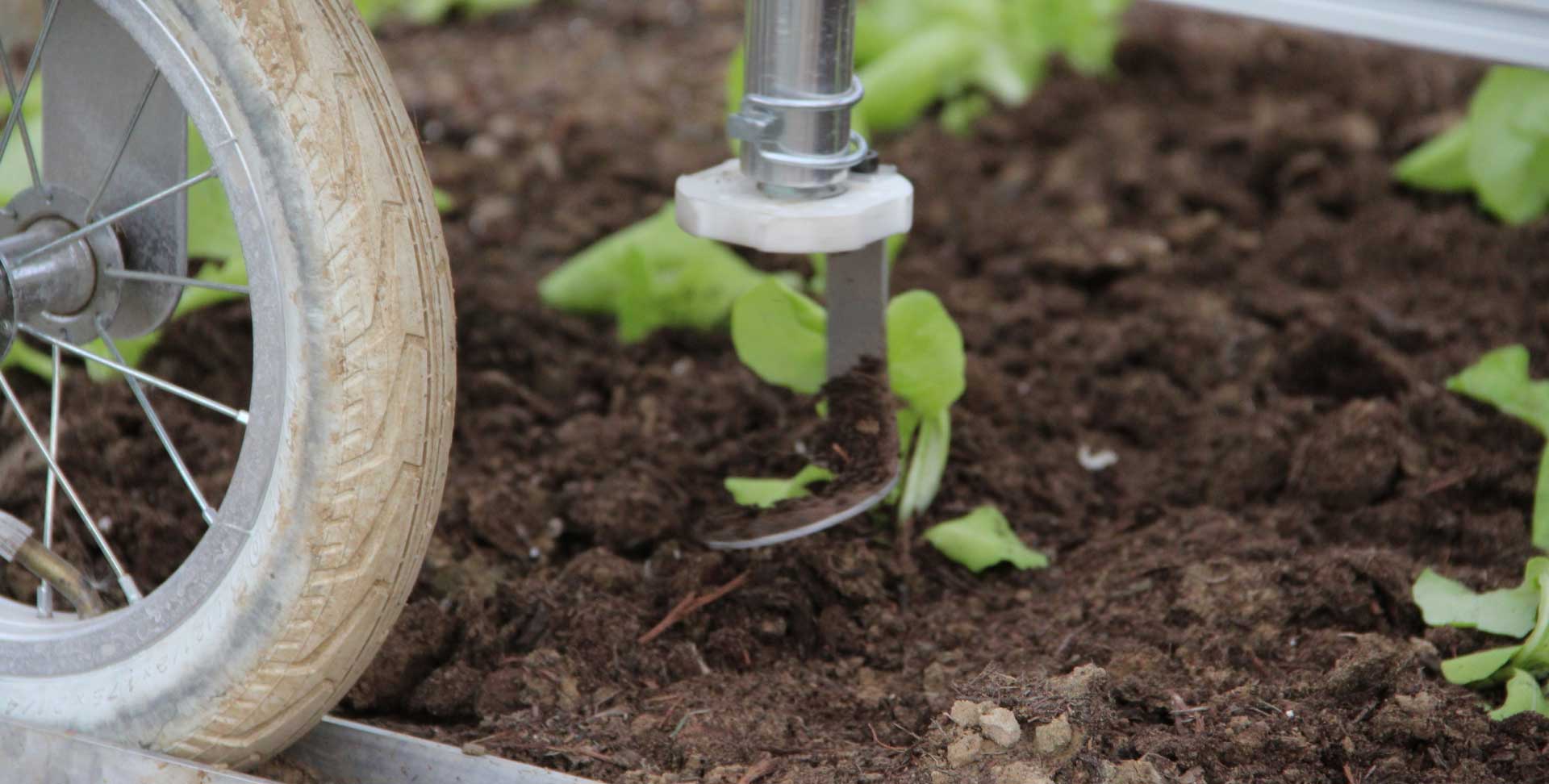 Right now, a ROMI robot is being put through its paces to weed and navigate an organic farm in a forest outside Barcelona. A sister robot is weeding on a commercial organic farm called Pépinières Chatelain close to Paris Charles De Gaulle Airport.

As market gardens and small farms grow a mix of crops, Minchin says ‘computational agriculture’ will allow robots to manage a complex variety of vegetable and fruit crops, growing at different rates and to different heights.

Scientists in the project use lots of imaging and mapping data with AI to identify and model plants.

Dr Godin and computer scientist Dr Peter Hanappe, at the Sony Computer Science Laboratories in Paris, are working with the weeding robot in France. It has visual software that lets it capture 2D images.

Once it takes a picture it must then interpret ‘this soup of pixels’, says Dr Godin.

These images are used to create 3D computer models that the robot then uses to better understand or manipulate its environment. They want to teach the robot to understand what is a leaf, a stem, a fruit and so on.

Dr Godin wants to improve the computer image analysis so that plant scientists can use the data collected by the robot to study crop varieties in growth experiments. The 3D plant models may also be used for programming robots in precise fruit picking or to breed better crops in the future. It may also allow the scientists – and ultimately farmers – to track the health and growth of crops.

In the future, a ROMI could see lettuce start to shoot up and know when it’s time to harvest, says Minchin. Or the technology could allow a new generation of farm robots to identify and pick fruit or vegetables when they are ripe.

‘Micro-farms are profitable and economically sustainable, but growers often struggle after around four years, as people develop back problems.’

For farmers growing a mix of vegetables and fruit, another option is a greenhouse, which protects against inclement weather and disease.

‘Greenhouses are ideal places to cultivate plants, but the main drawback is once pests manage to get in, they reproduce very fast,’ said María Campo-Cossío Gutiérrez at the Centro Tecnológico CTC in Spain, who leads a project called GreenPatrol. Once a pest or disease gets inside a greenhouse, it can inflict losses of up to 25% on growers.

Campo-Cossío Gutiérrez and her team developed a prototype of a smart roving robot to patrol greenhouses and pinpoint and identify when pests or diseases are present. The robot can operate autonomously, without human intervention.

The robot was trained on the main pest and diseases of tomato and pepper, as those are the highest value crops, and is being tested in greenhouses in northern Spain. Farmers can access an online application to see the robot’s status and a map of healthy and infected zones with recommended actions.

‘One of the main challenges is that the robot is in a (semi-) indoor environment,’ she said.

If it were outside, it could use satellite navigation, but greenhouses have roofs with metal reinforcements, which degrade signals.

Another challenge is that greenhouses change regularly as the crop grows, but also after harvests, when growing materials such as soil are removed. Because of this, robots cannot be programmed to follow defined routes.

‘We needed the robot to identity where pests are located and then come back and treat them in a second phase,’ said Campo-Cossío Gutiérrez. With the farmer’s instruction, the robot has the ability to spray the plant with pesticide.

The GreenPatrol robot uses novel algorithms which allows it to successfully exploit stronger signals from the Galileo global navigation satellites as well as orientation sensors and lasers to help guide its manoeuvres under the greenhouse roof. It can obtain a position inside the greenhouse with an accuracy better than 30cm.

The robot uses AI and image libraries to spot pest invaders and also harmless insects. ‘It is able to distinguish the degree of infestation and tell if it is an egg, or a larva, or full adult insect,’ said Campo-Cossío Gutiérrez.

It can then send growers real-time heat map updates of insect infestations to their smartphones.

Rover bots are not the only solution for growers. The ROMI project has also developed a flying companion for its rover – a drone that can scrutinise the plants from the air. ROMI scientists also constructed a cable bot to glide across crops and perform a similar job.

The ROMI team ultimately envisage their design not as a single weeding robot, but as platform to which farmers can attach sensors, cameras and tools and then take them off again.

‘You can imagine a farmer getting up in the morning and going to the tool shed. Putting tools onto the robot and turning it on,’ said Minchin.

This robot might then set about weeding or scanning for pests. If the farmer wishes to view the information, they could look at their phones or later that day on a computer back at home.