12 May 2021
by
Sandrine Ceurstemont
Republish 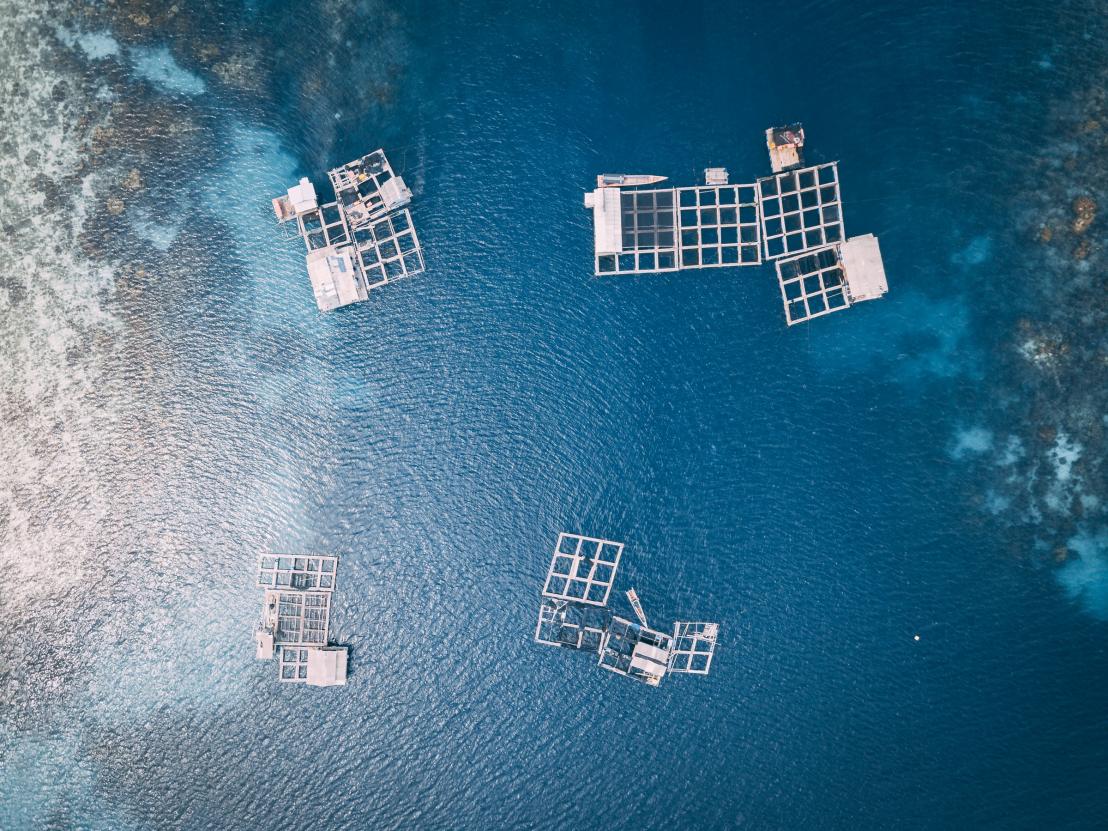 Aquaculture is one of the fastest growing food sectors worldwide. It supplies about half of the fish that people consume globally. Image credit - Hanson Lu / Unsplash

Farmed fish are increasingly becoming vegetarian, with plant-based feed now widely used in Europe. Researchers now want to optimise feed to promote fish growth and nutrition. To do this, they are studying fish gut bacteria and the impact of probiotic additives as well as testing nutrient supplements.

Aquaculture, which involves farming fish, shellfish and aquatic plants, is one of the fastest growing food sectors worldwide and it supplies about half of the fish that people consume globally. In Europe, aquaculture production reached a 10-year high in 2017 due to increased farming of fish species such as salmon, sea bass and bluefin tuna.

Fish meal and oils from small fish like sardines and anchovies used to be the main source of feed for farmed fish. But plant-based sources of protein, such as soybeans or corn, have become more widely used in the past decade partly for environmental reasons.

‘Fish stocks have become a limited resource and they're actually protected in certain areas,’ said Dr Morten Tønsberg Limborg, an associate professor in evolutionary genomics at the University of Copenhagen in Denmark. ‘So there has been a transition to using more and more raw materials from plants.’

It’s not well understood, however, how changing the diet of farmed fish affects their health and growth.

Fish such as salmon and trout, for example, are predatory and hunt other fish for food in nature. ‘There have been some issues with trying to turn them into vegans,’ said Jacob Agerbo Rasmussen, a PhD student at the University of Copenhagen. Eating soybean-based meals, for example, often reduces their growth since dietary fibres are hard to digest.

Furthermore, there is a recent trend of adding probiotics - cultures of live bacteria - to fish feed with the intention of boosting gut health and growth. But their effect isn’t well understood. ‘Anything that happens inside the gut in terms of the bacteria in there, and the effect of the added bacteria, is just a big black box,’ said Dr Tønsberg Limborg. ‘It hasn’t really been possible to study what happens before.’

Dr Tønsberg Limborg and Agerbo Rasmussen have taken steps towards that by investigating the composition of bacteria in the gut of specific species as part of the Happy Fish project. They used new tools, such as a technique that allowed them to look at the genetics of bacteria in the gut, to describe the different types of bacteria present and how they interact.

In one experiment, the team analysed the gut bacteria of rainbow trout and Atlantic salmon, two species that are widely farmed, and European whitefish. The trout and salmon were from different aquaculture facilities while the whitefish was from a wild population. They were surprised to find that a single bacteria was highly-dominant in all the fish. ‘We always talk about millions of bacteria in the gut of humans,’ said Agerbo Rasmussen. In predatorial salmonid fish, however, one type of bacteria is often dominant and present in very low amounts, he says. 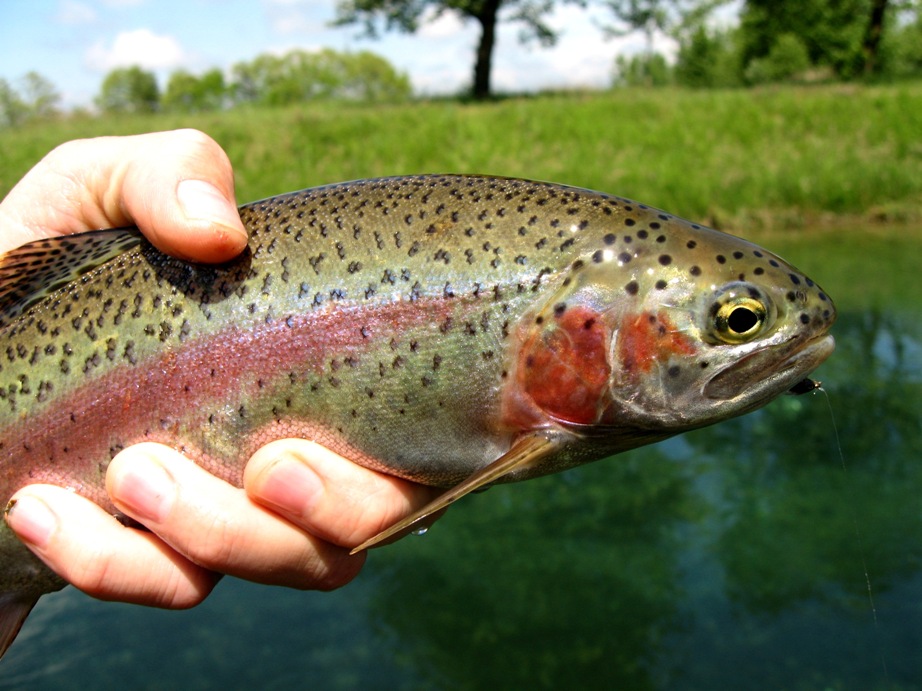 It is generally assumed that gut bacteria in fish are a product of their surroundings, where the same bacteria would be found in the water they are swimming in. But Dr Tønsberg Limborg thinks their results suggest this isn’t the case since the fish came from different environments. He thinks instead that the bacteria may have coevolved with the fish and there could be a symbiotic relationship involved where there is some sort of long-term interaction between them. ‘It seems very unlikely to get that by chance,’ he said.

The low quantity of bacteria could be related to the temperatures of their environment. Agerbo Rasmussen suspects that the cold water they live in could play a role. ‘These bacteria are most likely slow growers and it takes a long time (for them) to colonise in the gut,’ he said.

To try to find out whether more diverse gut bacteria have an impact, they ran studies with probiotics. They fed three groups of rainbow trout different types of feed. The first group was fed a standard feed while the second was given the same feed with added probiotics. The third group received the same diet as the second group supplemented with a dietary fibre which is thought to have added benefits for the probiotic supplements.

‘There have been some issues with trying to turn them into vegans.’

Preliminary results suggest that feeding them probiotics did have an effect. Although there wasn’t a big difference in their growth, there was a change in the bacteria in their gut, where other bacteria became dominant. It’s still unclear whether this is beneficial for the fish. There was a shift in nutrient uptake as well, where probiotic bacteria seemed to boost a rainbow trout’s ability to digest fat.

The work is a first step to better understanding the role of added probiotics in fish feed. Previously, fish farmers would only measure whether fish grew better when bacteria supplements were incorporated but now they are showing that the effect is far more complex. ‘Our results will not lead to a different way of feeding farmed fish tomorrow,’ said Dr Tønsberg Limborg. ‘But the project has demonstrated a whole new toolbox to analyse and understand the gut microbiome of these fish.’

Defining the nutritional requirements of different species of farmed fish is also needed to optimise feed. Salmon and trout have been the pioneering species in fish farming so guidelines formulated for them are often applied to other types of fish. ‘It became apparent that they are not the same,’ said Dr Katerina Moutou, an associate professor of vertebrate biology at the University of Thessaly in Greece and coordinator of the PerformFISH project.

Dr Moutou and her colleagues are focussing on determining the particular nutritional needs of gilthead sea bream and European sea bass as part of the project. They are also exploring alternative sources of protein and lipids that can be used in fish feed, such as raw materials of marine origin like algae. Their ultimate goal is to come up with new feeds that have more efficient feed conversion rates, where less feed would be required to grow a kilogram of fish. ‘This is important for the environment and the economic sustainability of companies,’ said Dr Moutou. 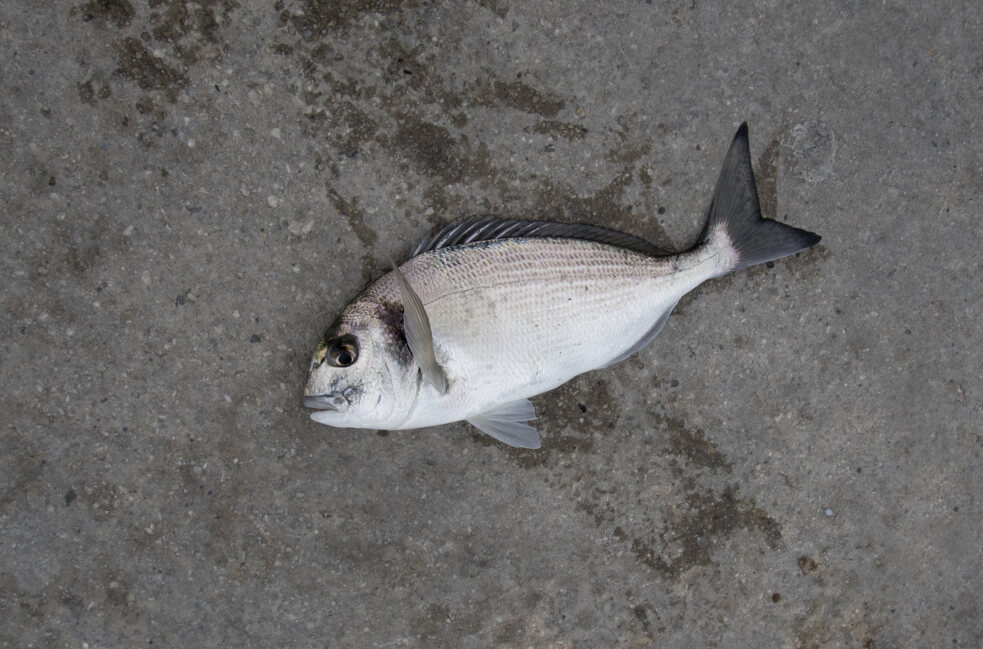 Researchers have found that the guts of farmed rainbow trout are dominated by a single bacteria. Image credit - helti, licensed under CC BY-NC-ND 2.0

So far, the team has managed to gain insight into some of the nutritional requirements of sea bream and sea bass. Several experiments with sea bream were performed to determine recommended dietary levels of certain vitamins such as A, K, D and B12 as well as copper, manganese and selenium, essential dietary minerals. They determined, for example, that supplementing plant-based diets with a small amount of selenium would promote the growth of young sea bream. Similarly, diets low in fishmeal and fish oils should be supplemented with vitamin A to improve a fish’s growth and liver health. However, adding too much of the vitamin could be toxic to sea bream although higher levels are tolerated by sea bass.

They also conducted experiments where they investigated whether sea bream could adapt to novel diets, specifically looking at how they metabolise fat. One trial was conducted with fish raised for breeding purposes where different groups were fed diets with varying quantities of fish oil. They found that genetic differences would determine how fast the offspring of parents fed on a diet free of fish oil would grow when they were also raised on feed without fish oil. ‘We are trying to identify the genetic recipe of those fish that deal with new ingredients in a better and more efficient way,’ said Dr Moutou. ‘In this way, breeding and feeding will go side by side.’

The team is working with fish feed companies who have already started applying their findings. They are now able to formulate fish feed for sea bream and sea bass based on revised nutritional requirements, where initial results from tests in fish farms suggest that the supplemented diets are more efficient. The new guidelines should help companies select appropriate new substitutes for fish meal and fish oils, including local ingredients which should further help with sustainability. ‘I think this has been very important and also increased the palette of proposed alternative ingredients,’ said Dr Moutou.

The next step will be to further optimise how much and when fish are fed by using technology such as sensors to monitor their feeding behaviour. This move towards precision aquaculture would allow fish farmers to adjust feeding rates depending on different factors that influence their consumption patterns, such as the time of year. ‘That would decrease wasted food,’ said Dr Moutou. ‘It’s going to be part of what we call the fourth industrial revolution in aquaculture.’

Researchers are now investigating how feasible this is.
END_OF_DOCUMENT_TOKEN_TO_BE_REPLACED