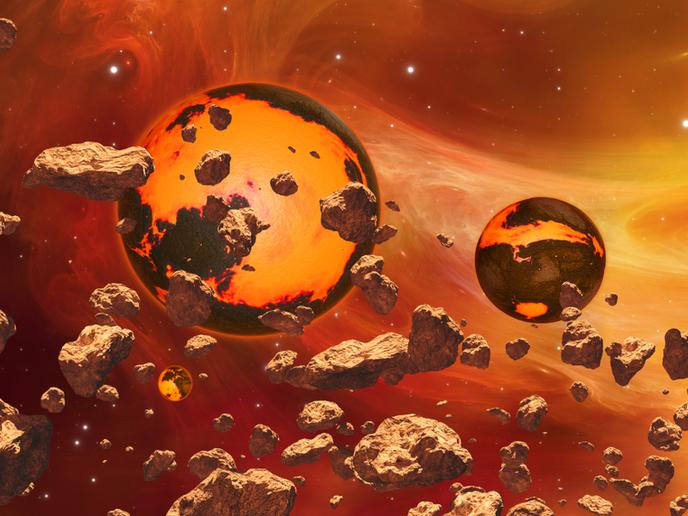 Astronomers studying the processes around star and planet formation have observed that regions where planets arise possess a complex chemistry. © Jurik Peter, Shutterstock

Just as human beings and all other living things exist in a vast number of different forms thanks to their genetic makeup, so different types of planets occur due to the chemical processes at work in the dusty regions surrounding newborn stars.

It appears that nature has a fondness for forming exoplanets – planets beyond our own Solar System. Over the last 20 years, scientists have realised that exoplanets are far more common in our corner of the cosmos and the universe in general than previously believed.

To deepen our understanding of planet formation scientists must find and observe the formation of many such systems. But watching a planet evolve in real time would take millions of years. Instead, astronomers peer into certain regions of space, piecing together like a puzzle the different clues they observe and simulating the results in the laboratory.

The most widely accepted model for planet formation, known as the nebular hypothesis, begins with a swirling disc of gas and dust – left over material from the birth of a nearby star. At some point in time, gravity triumphs over the pressure supporting this cosmic dust, which then starts to rotate, quickly collapsing under its own gravity.

Although astronomers are now well aware of how planets begin, the precise chemical processes that unfold during the formation of a new world remain elusive.

Where do planets pop up?

We discovered that the organic content that can be seen in comets in our own Solar System today probably originated 4.5 billion years ago when the Solar System was in the earliest stages of its evolution.

Astronomers studying the processes around star and planet formation have observed that regions where planets arise possess a complex chemistry.

‘We detected large organic molecules that could potentially be the building blocks for life in the regions where planets are forming around young stars,’ said Jes Kristian Jørgensen, head of the S4F research team.

Using the Atacama Large Millimetre Array (ALMA) telescope in Chile, the scientists identified the specific wavelengths of light emitted by molecules. They found that in dense cold regions where the dust cloud collapses into a star, molecules are formed on the surfaces of small dust particles. The ice found in these cold regions causes them to freeze and stick together, forming more complex types of organic molecules.

‘We discovered that the organic content that can be seen in comets in our own Solar System today probably originated 4.5 billion years ago when the Solar System was in the earliest stages of its evolution,’ revealed Jørgensen.

This implies a significant part of the chemical processes occurring during the earliest stages of star formation was inherited by the protoplanetary disc, a rotating disc of dense gas surrounding a young newly formed star, and the bodies formed within it. ‘The degree of inheritance was very surprising,’ commented Jørgensen. Interestingly, the same organic composition was also detected in other galactic regions where the physical conditions are significantly different.

‘Over the next 5–10 years we will start the task of thoroughly characterising the atmospheres to discover how their chemistry relates to the material present on the planets we observe today. It will also help determine whether our Solar System is unique and if life could appear elsewhere in the universe,’ Jørgensen explained.

The Moon is the clue

Although most scientists believe that Earth-sized exoplanets formed gradually over the course of millions of years from a mass of gas and dust, many of the processes involved are still little understood.

Our own Moon may be able to provide some answers. In a recent study, researchers found that it has undergone melting and evaporation, explaining why important chemical elements, known as volatiles, have been significantly depleted.

‘Volatile elements play a major role in terrestrial planets, including their ability to develop and sustain life and the geochemical properties that make each planet unique,’ said Frederic Moynier, professor at the Institut de Physique du globe de Paris at the University of Paris.

Moynier and his team at the PRISTINE project measured the concentration of isotopes, different forms of the same element, for volatile elements like zinc, copper, gallium, rubidium and potassium, which are present in much lower quantities on the Moon compared to Earth.

These variations in element concentrations could shed more light on how the Earth-Moon system formed, but the exact mechanism has been the subject of a longstanding debate. Research had yet not explained the depletion pattern of certain volatile elements on Earth and Moon and for the overabundance of others – until now.

It seems that when the Moon first formed it was almost completely molten and orbiting very close to the Earth. The team’s research showed for the first time that during this molten state, a “planetary-scale” evaporation of volatile elements took place.

Volatile loss by evaporation from a magma ocean is now the new model for explaining the formation and composition of the Moon and planets.

‘This stage of a fully molten celestial object is called a magma ocean. We showed that volatile elements evaporate during this stage. Volatile loss by evaporation from a magma ocean is now the new model for explaining the formation and composition of the Moon and planets,’ said Moynier.

New applications outside of astronomy

Exciting times are certainly ahead for scientists who study the intricate chemical processes that have shaped our cosmos. Further modelling and experimental activities in the laboratory will better reveal how certain factors, like the temperature, pressure and initial chemical composition of a planet affect the evaporation rate of volatile elements.

We are part of the development of a new field called “isotope metallomics” that measures the composition of stable isotopes in the human body.

Moynier’s research also has broader implications for other fields. His techniques for studying planet formation have now been applied to how the human body processes certain metals.

‘We realised that changes in the isotopic composition of elements such as zinc and copper could serve as biomarkers for diagnosing conditions like the Alzheimer’s disease that affects the metal balance in the body. We are part of the development of a new field called “isotope metallomics” that measures the composition of stable isotopes in the human body,’ concluded Moynier.

The research in this article was funded by EU’s European Research Council. If you liked this article, please consider sharing it on social media.

Insects, microorganisms and earthworms are on the job.
END_OF_DOCUMENT_TOKEN_TO_BE_REPLACED