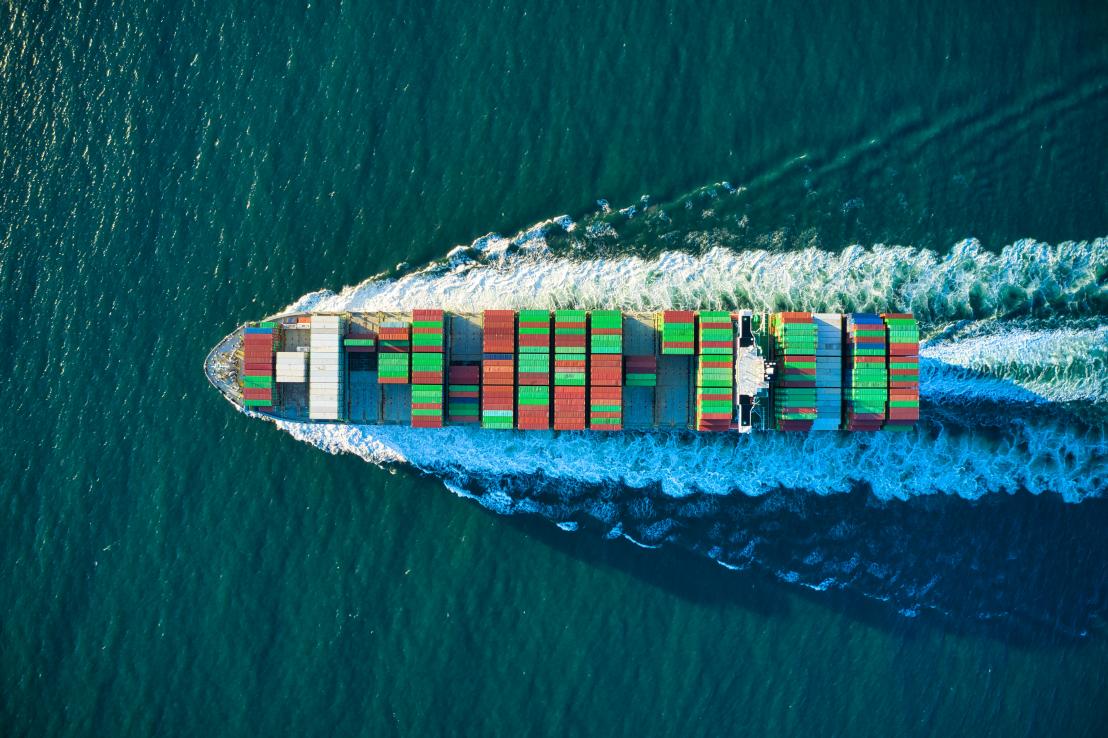 Steel ships are often damaged by corrosion and repair is eventually no longer possible, which is not a problem when non-metallic materials are used. Image credit - Cameron Venti / Unsplash

Ships have a significant environmental impact during building, operation and when they’re scrapped, but new approaches and composite materials to replace steel – still popular due to its strength and low cost – could make vessels more sustainable, recyclable, and less noisy for marine animals.

Using ships to transport goods contributes significantly to global greenhouse gas emissions, with about 940 million tons of carbon dioxide being released every year. In Europe, maritime shipping is responsible for about 13% of all transport emissions. Shipbuilding itself consumes energy and produces waste at the end of a ship’s life with only some parts of a vessel repurposed.

‘(Ships) are taken to scrapping facilities, most of them in Africa or Asia,’ said Alfonso Jurado Fuentes, head of research and development at TSI, an engineering company specialised in marine activities in Madrid, Spain. ‘Many of these materials are extremely degraded and useless but some of them are used as an important source of raw materials on these continents.’

Building ships that are less heavy is one tactic that can help reduce emissions. Using composite materials such as fibre-reinforced plastic (FRP) instead of steel, for example, should reduce a ship’s weight and lower fuel consumption. ‘You have the benefit of consuming less fuel and then emitting less pollutant gases,’ said Matthias Krause from the Center of Maritime Technologies in Hamburg, Germany. ‘That also means less emissions per transported kilogramme of payload.’

Furthermore, using composite materials could extend a ship’s lifetime and therefore reduce resources needed for construction. Steel ships are often damaged by corrosion and repair is eventually no longer possible, which is not a problem when non-metallic materials are used. There is also potential to better reuse vessels made from composite materials as they can be better recycled at the end of their life, says Jurado Fuentes. Whereas about 34% of steel ships are repurposed, it is thought that up to 75% of composite ships could be given a second life.

‘We have been studying different technologies and technical advances to demonstrate that it is feasible to design, build and operate these kinds of vessels.’

Krause and his colleagues are investigating the use of new materials and technologies to make specific components of large vessels, from cruise ship cabins to rudders, as part of the RAMSSES project. They are looking, for example, at how metallic propellers could be made using a 3D printing technique that would allow for hollow and more lightweight blades. The propeller would also be quieter and emit less vibration. ‘If you're thinking about environmental benefits, it is also about less noise, which is harmful for the animals in the sea,’ said Krause.

The team produced prototypes of several parts such as a ship hull made of FRP. Working with a shipyard in the Netherlands that produces patrol vessels, they needed to develop a new type of resin that wouldn’t set too quickly since they wanted to create part of a six-metre-high hull.

They were able to show that their composite ship hull would have a lower environmental impact than if it were made of steel. It weighed over 24% less, which they calculated would lower its environmental footprint during operation by 25% when considering factors such as greenhouse gas emissions and aerosol formation, which impact air quality.

Composite materials could also be used to repair damaged steel ships and extend their life. A patch made of composite materials, for example, could be applied to cracks or to reinforce areas welded together. ‘We are investigating the link between composite structures and steel in order to have an easier way to (perform) a quick and safe repair onboard,’ said Carlo Cau, project coordinator and senior researcher at a maritime research and consultancy company called Cetena in Genoa, Italy. 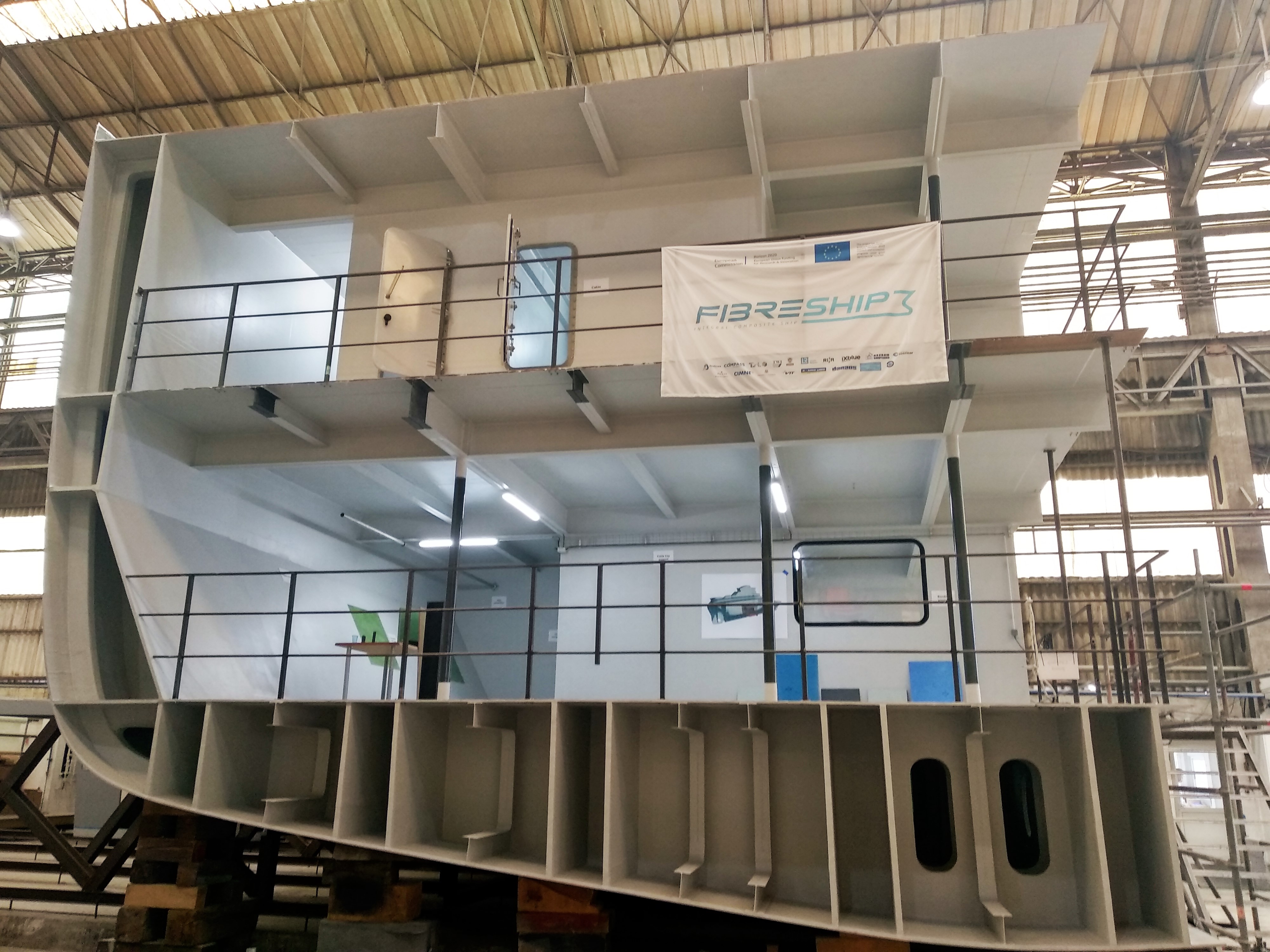 The Fibreship project investigated the feasibility of constructing an entire vessel out of composite materials such as FRP (fibre-reinforced plastic). Image credit - TSI

Another approach is to focus on making an entire vessel out of composite materials, which was the aim of Jurado Fuentes and his colleagues. They investigated the feasibility of constructing large ships more than 50 metres in length out of FRP as part of the Fibreship project. Their main goal was to set the foundations for the design and construction of these vessels by, for example, coming up with design guidelines and performance criteria, which didn’t exist. ‘We have been studying different technologies and technical advances to demonstrate that it is feasible to design, build and operate these kinds of vessels,’ said Jurado Fuentes.

Members of the team designed three different FRP vessels: a container ship, a fishery research vessel and a vessel that can transport cargo, vehicles and passengers, known as a RoPax. Since their container ship design would result in a more lightweight vessel, they calculated that it would be able to carry almost 17% more cargo when fully-loaded compared to a steel counterpart. With their fishery research vessel design, they were able to obtain a total weight reduction of 36%.

Their RoPax design would also result in a significant reduction in weight and hence fuel consumption. Since this type of vessel travels at much higher speeds compared to the two other vessels, which require high power from the engines, cost savings would also be most significant. ‘It is a better investment opportunity compared to the steel vessel,’ said Jurado Fuentes.

Although the team’s budget didn’t allow for a full FRP ship prototype to be built, they constructed a block of a fishery research vessel at IXBLUE facilities in La Ciotat, France. With dimensions of 11 by 11 by 8.6 metres, it contained a bottom deck with part of an engine room and an upper deck with passenger accommodation. The team was able to demonstrate that it is feasible to build large structures from composite materials.

‘You have the benefit of consuming less fuel and then emitting less pollutant gases.’

But there are still hurdles to overcome before composite ships become a reality. Cau and his colleagues found that it’s tricky for a ship component to meet all the different requirements. One panel they created, for example, was fire resistant and had satisfactory mechanical properties but it didn’t meet noise and vibration standards, which could hinder the comfort of passengers onboard. ‘There are a lot of aspects to be satisfied and the ability to satisfy all (of them) in the same product is something that we are trying to solve,’ said Cau.

Further work is also needed to address recycling FRP ships at the end of their life. Few facilities in Europe are capable of recycling composite materials, where fibres, resins and other materials need to be first separated. ‘Today, it's really expensive to recycle a lot of elements of FRP,’ said Jurado Fuentes. ‘I think more research and investment is needed.’

For larger ships made entirely of FRP, the main challenge is to show that they meet fire safety standards set by the International Maritime Organisation (IMO). FRP is a combustible material and it would currently be difficult to evacuate an FRP vessel in time to avoid casualties. Its material properties also don’t hold up at high temperatures and a vessel could therefore collapse. Manufacturers of composite materials are working on developing FRP resins that are non-combustible and the way spaces onboard are designed could help improve fire safety too.

Jurado Fuentes thinks that large composite vessels could start navigating in about 15 years, as regulations and standards for design and construction are established in the industry as well. ‘It's a matter of improved technology to make these vessels safer,’ he said.

Updated 13 April, 2021: The name of the shipbuilding facilities for the Fibreship project - IXBLUE - was added. 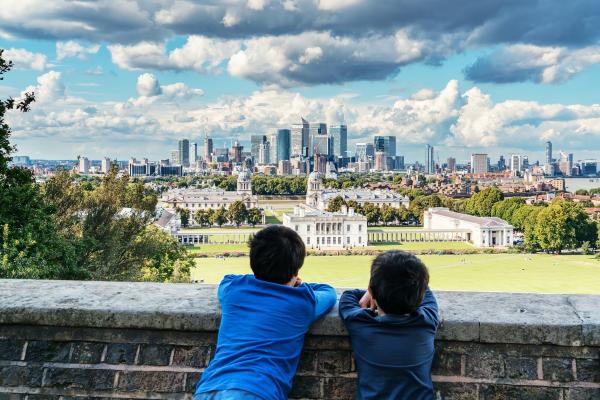 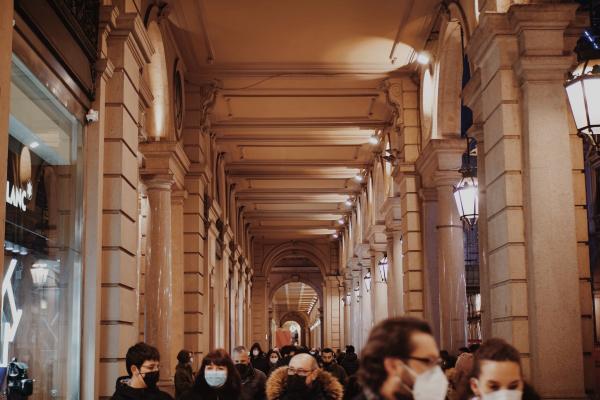 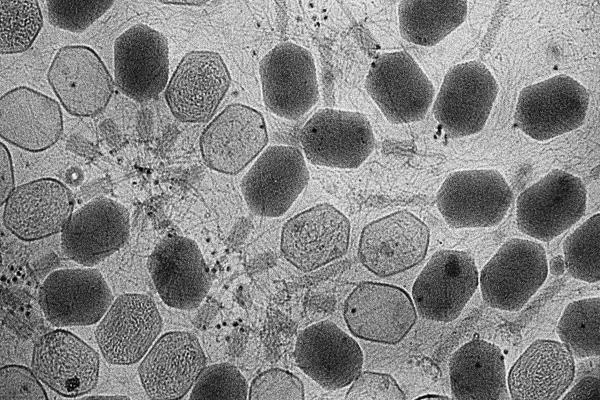 Cancer research needs to change so that cancer treatment can become truly personalised, according to Professor Martine Piccart.
END_OF_DOCUMENT_TOKEN_TO_BE_REPLACED