More and more people are looking to rail as a safe and environmentally friendly way to travel. Rail journeys can reduce travellers’ emissions. For instance, taking the train from Zurich to Milan, a 217km trip, instead of flying saves around 103kg of CO2 emissions per passenger, according to a Deutsche Welle analysis.

Passenger rail numbers in Europe were steadily growing for years before national lockdown measures in early 2020. In Sweden a new word - Tågskryt (‘train brag’) - has entered the lexicon to describe when people encourage others to take the train.

Train companies in Spain, France and Germany are already ordering high-speed and cross-border trains to meet anticipated demand. Unfortunately, it’s not as simple as making more trains and putting them on the tracks. Europe already has one of the longest and most dense railway networks in the world, meaning that trains will need to find a way to navigate the more crowded track safely.

Braking systems are a key aspect of this. More trains on a track means it’s crucial to ensure that the brake performance on each carriage is on the same level and that the brakes don’t wear out quickly, says Martin Ertl, vice president of innovation at braking systems manufacturer Knorr-Bremse in Germany.

‘We have to reduce the headways (distance) between the trains without compromising safety,’ he said. ‘That can only be done with a new set of technologies.’ He is leading the company’s involvement in Shift2Rail's PIVOT2 project, which is looking at ways to improve the shell and undercarriage of trains.

Brakes are a logical candidate for an upgrade. Many modern train brakes, Ertl explains, are controlled by an air pipe running from the front of the train to the air brakes of each carriage. The train driver can increase the air pressure along the pipe to release the air brakes, and decrease the pressure to activate the brakes.

Research shows this braking method has worked well since its introduction in the 1860s, but still has some problems. For example, in older systems it does not let the driver know if there is something wrong with one of the brakes. And since the air moves through each carriage in sequence the brakes are activated simultaneously but may react with some latency. In combination with difficult friction conditions this means while the carriages at the front may have a high deceleration rate, the last carriage is hardly braking at all. This makes emergency braking difficult.

His team is looking at ways to improve another type of braking technology, one that uses electronics to make sure that train carriages reliably have a consistent stopping distance, give permanent feedback, and are longer-lasting than the types of brakes currently available.

‘With this new generation of brakes you have different sensor technologies (on top), meaning you can get the data, and then compute it already on the train,’ said Ertl. This data can then, for example, be shared in advance with depots so they can better plan when to bring the train in for maintenance.

The project has designed a prototype pneumatic brake whose brake pads use lighter materials, different surface patterns to improve its grip, and has fewer components. Early tests have shown these prototypes to be 16% lighter, reduce the braking distance by 40% and reduce wear by 55% compared to conventional brake pads on the market.

At the moment, the project is further testing the new pneumatic braking technology. This includes testing the brakes in their Munich site in a 15-metre high, 760 tonne test rig called ATLAS that can reach speeds up to 350 km/h. 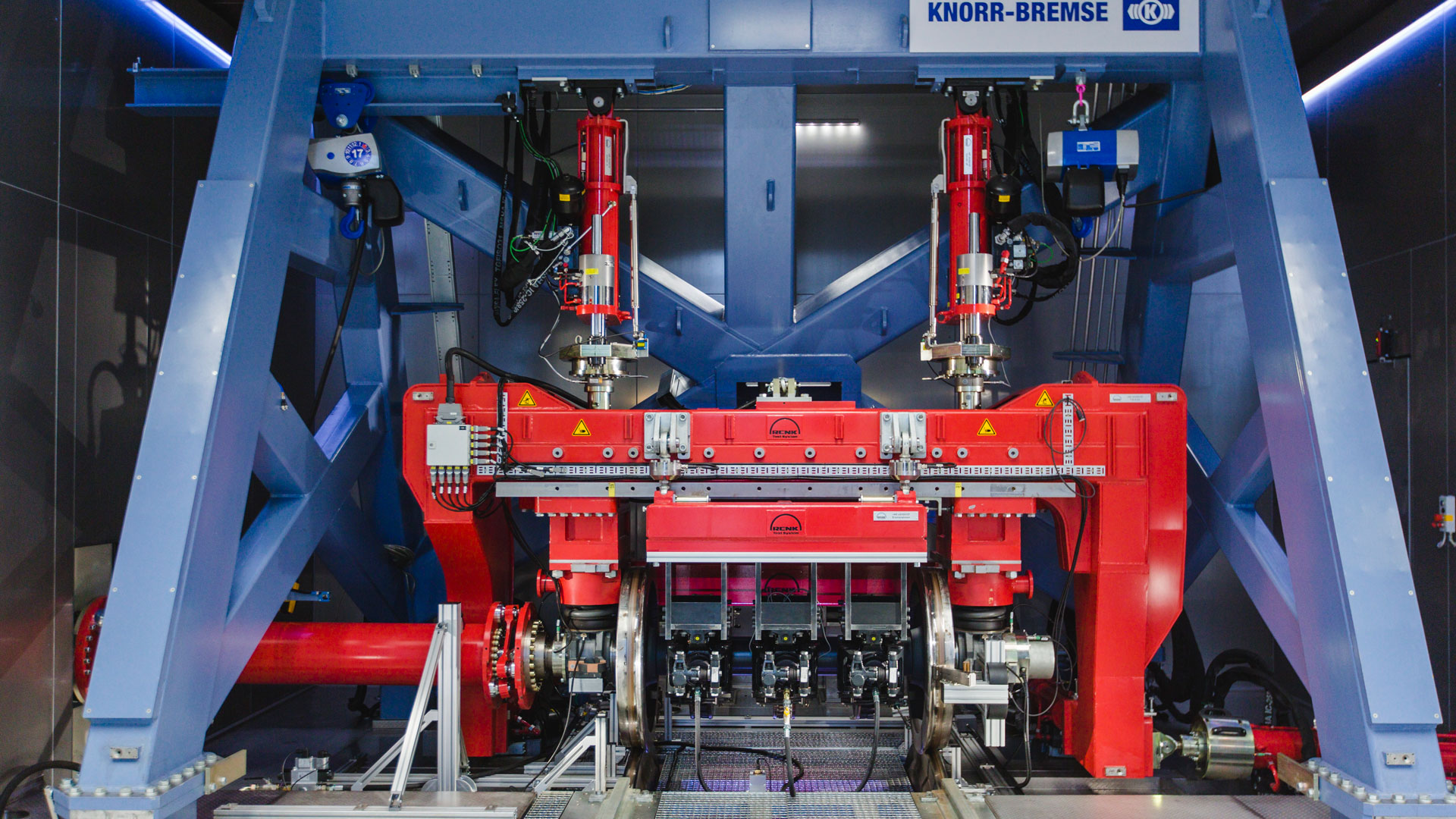 But making sure more trains can travel on the tracks requires more than better brakes. If a train needs to brake suddenly, other trains using the line need to know so they can avoid collisions. This means trains typically travel along separate ‘blocks’ of the track at a time, with each block length giving the train enough distance to brake before getting too close to another.

The problem, as Simon Chadwick of Siemens Mobility UK points out, is that each block is spaced out so that long, heavy freight trains have enough distance to brake. Lighter, shorter passenger trains need less braking space, but still need to travel along these same fixed blocks. According to one estimate a block can range from 500 metres to six kilometres, depending on the type of train and its speed. This forces trains with better braking to travel according to the worst-braking train on the track.

‘In traditional signalling, which is based on fixed blocks, the block structure is hard coded into the railway,’ he explained.

This can be a waste of space, he says. That’s why train companies are looking at using ‘moving blocks’ to separate trains. Instead of travelling along fixed lengths on a track, trains can communicate with each other and calculate what distance they need to keep away from each other.

‘It’s no longer based just on the “worst-case” type of train,’ he said. ‘You can have different types of trains.’

In Shift2Rail's multi-stage project, X2Rail, his team is looking at how to improve on-board signalling technology so that trains travelling in a moving block can easily know each other’s position.

This involves using standard markers along the track, plus radio communication and satellite navigation systems on-board the train to tell other trains and traffic managers where they are. This satellite and radio-based information is faster to transmit and is more efficient than train monitoring equipment installed directly on the tracks, says Chadwick.

Radio and satellite technology can also help if a carriage detaches from a train since equipment on both the train and the carriage can send an alert, whereas carriage-counting equipment installed on the track will only detect the loss when the train reaches it.

‘We have to reduce the headways (distance) between the trains without compromising safety.’

Using satellite and radio technology on trains has benefits beyond increasing capacity on railway lines, says Chadwick. It can potentially reduce costs since less trackside train-detection equipment is needed, and it’s more reliable since the train is constantly sending updates about its position.

​​Better train monitoring, he says, will be important for the nascent European Train Control System (ETCS), a common set of rail monitoring, signalling and safety systems – both trackside and on the train – that is slowly being applied throughout Europe.

The previous phases of the X2RAIL project focused on designing ETCS satellite and radio technology to be installed on the trains. The current phase, X2RAIL-5, is using computer models to analyse both the cybersecurity of the equipment and see how it might behave in the real world. For example, their models will analyse how when a train passes through a section with a weak signal, other trains and the central train monitoring system can still know where it is.

‘The big issue behind all that is that if I’m (as a train driver) going to rely totally on trains informing others of their location, they have to understand how that's going to work,’ said Chadwick.

If their analyses indicate the technology will be successful, they hope that the technology can become a standard throughout Europe. This will be vital if the growing number of international train routes, such as OBB’s NightJet service, is to continue.

Both projects are part of the Shift2Rail initiative, which aims to double Europe’s rail capacity and increase its reliability and service quality by 50%, all while halving life-cycle costs. This is a goal that Ertl believes needs to happen if Europe is to transform into a more sustainable society.

‘I do see that there is a growing demand globally for a sustainable way of transporting a high number of people,’ he said. ‘There is no other way in my view than having rail as a backbone of a sustainable means of transportation.’