From locust to robot collision avoidance: collision detecting circuits from the locust brain were used to process images coming from a video camera looking at a hemispherical lens with a 360 degree field of view. Prof. Claire Rind and her team ran the images through the locust model, which generated a warning for an approaching object fed into the motor control unit of the research Khepera robot. © Newcastle University

Cars could brake in a split-second when faced with a possible collision, if a robotics breakthrough inspired by locusts delivers on its promise.

Scientists from the University of Lincoln and Newcastle University in the UK copied the locust’s visual system to make a robot that can guide itself autonomously, and they believe the technology could have a major impact on car safety.

'It’s simple, uses less computer power and it’s more reliable as it does not deal with different object categories,' explains Dr Shigang Yue, a robotics specialist at the University of Lincoln who worked on the project.

The EU’s target is to halve the number of car accidents by 2020, and last year alone, 28 000 people died in road accidents in Europe, according to an EU road safety report published in March this year.

The thing about locusts is that they can respond to an impending collision in 45 milliseconds, five times faster than the typical blink of an eye.

The system the UK researchers have developed to emulate the locust isn't quite that fast, it responds in 500 milliseconds. However, that's easily enough time to save a life.

‘It’s simple, uses less computer power and it’s more reliable as it does not deal with different object categories.’

'We created a system inspired by the locusts’ motion-sensitive interneuron – the lobula giant movement detector,' says Dr Yue. 'This system was then used in a robot to enable it to explore paths or interact with objects, effectively using visual input only.'

The lobula giant movement detector is a large motion-sensitive neuron that sits behind the locust's eyes. Whenever it is about to collide with a predatory bird, an object or other locusts coming its way, the neuron sends warning messages to its wings and legs to take prompt, evasive action.

A plague of locusts

The idea for the chip emerged in 1995 when Professor Claire Rind of Newcastle University was watching millions of locusts, known collectively as a plague of locusts, take off. 'It seems to be quite a jumble, but they seem to avoid collisions,' she comments.

During an ensuing four-year study, Prof. Rind’s team proved that by producing contrasts, a camera can easily feed images to the algorithms of a chip, which can then be used to induce action such as braking.

The technology they developed is simpler and faster than more complicated laser-based systems as, like the locust, they don’t bother trying to identify the type of object the vehicle is close to colliding with. Hence all the power-hungry, slower image processing computers used for car safety systems to date would no longer be needed. 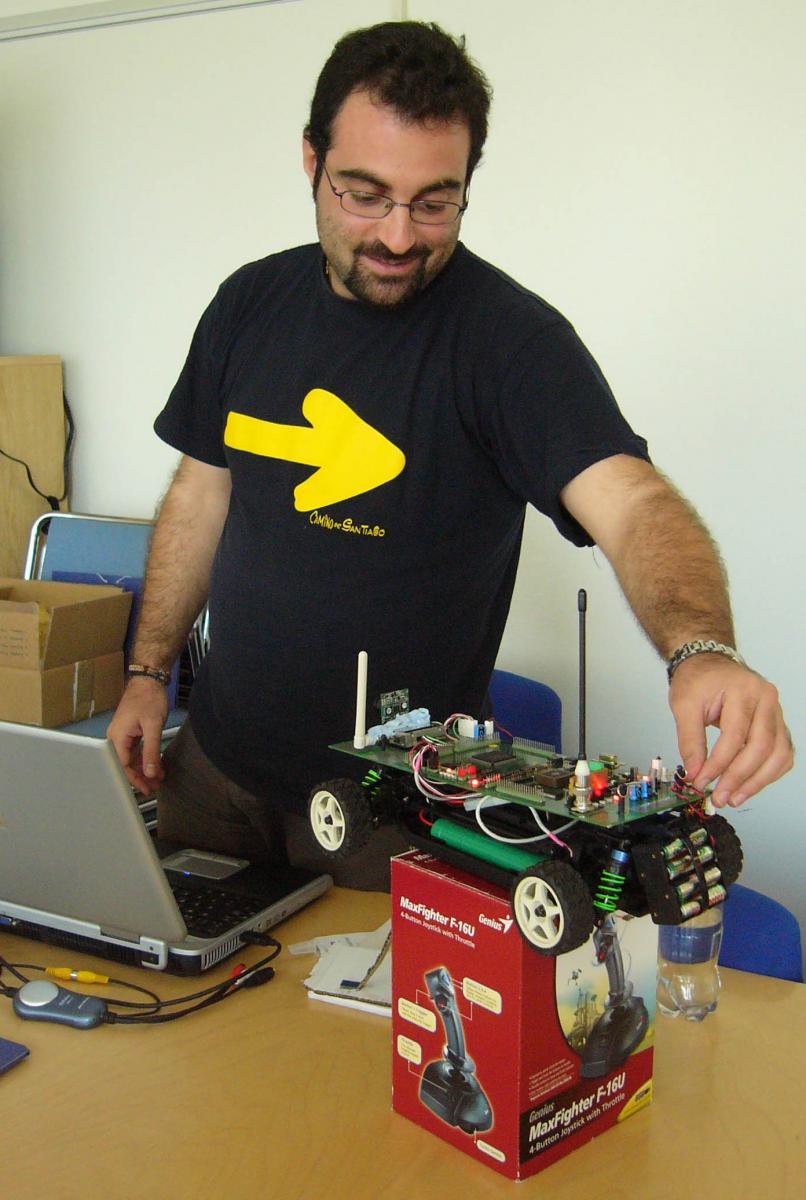 And, because it is simple, it’s also cheap. Prof. Rind’s team objective was to produce a standardised system, the size of a mobile phone SIM card. If produced in industrial volumes, the chip should cost no more than EUR 20, Dr Yue said.

'Industry needs a very high reliability standard and we hope to produce it to that standard,’ Dr Yue adds, explaining that the system is 'very efficient and it can find a path in a really complex environment, such as a forest'.

The European automotive industry invests EUR 26 billion annually in research and development, and, according to the European Automobile Manufacturers Association (ACEA), the time is right to develop such systems for use in cars.

'The demand is for solutions that could manage very complex scenarios, such as in urban traffic, at low cost,' remarks Gianfranco Burzio, ACEA’s Safety Director.

It seems logical to turn to nature for answers; after all it has had millions of years to come up with solutions to problems like collision avoidance. 'There’s so much to learn from such a simple insect as the locust,’ concludes Dr Yue, who is now coordinating LIVCODE (Life-like visual information processing for robust collision detection), another EU-funded project based on the locust's visual system that runs until 2016.

A better understanding of how sand behaves in the wind should help protect tracks and trains.
END_OF_DOCUMENT_TOKEN_TO_BE_REPLACED

Cancer research needs to change so that cancer treatment can become truly personalised, according to Professor Martine Piccart.
END_OF_DOCUMENT_TOKEN_TO_BE_REPLACED