How scientists are ‘looking’ inside asteroids

Only four spacecraft have ever landed on an asteroid – most recently in October 2020 – but none has peered inside one. Yet understanding the internal structures of these cosmic rocks is crucial for answering key questions about, for example, the origins of our own planet.

‘Asteroids are the only objects in our solar system that are more or less unchanged since the very beginning of the solar system’s formation,’ said Dr Fabio Ferrari, who studies asteroid dynamics at the University of Bern, Switzerland. ‘If we know what’s inside asteroids, we can understand a lot about how planets formed, how everything that we have in our solar system has formed and might evolve in the future.’

Then are also more practical reasons for knowing what’s inside an asteroid, such as mining for materials to facilitate human exploration of other celestial bodies, but also defending against an Earth-bound rock.

NASA’s upcoming Double Asteroid Redirection Test (DART) mission, expected to launch later this year, will crash into the 160m in diameter asteroid moon Dimorphos in 2022, with the aim of changing its orbit. The experiment will demonstrate for the first time whether humans can deflect a potentially dangerous asteroid.

But scientists have only rough ideas about how Dimorphos will respond to the impact as they know very little about both this asteroid moon, and its parent asteroid, Didymos.

To better address such questions, scientists are investigating how to remotely tell what’s inside an asteroid and discern its type.

There are many types of asteroids. Some are solid blocks of rock, rugged and sturdy, others are conglomerates of pebbles, boulders and sand, products of many orbital collisions, held together only by the power of gravity. There are also rare metallic asteroids, heavy and dense.

‘To deflect the denser monolithic asteroids, you would need a bigger spacecraft, you would need to travel faster,’ said Dr Hannah Susorney, a research fellow in planetary science at the University of Bristol, the UK. ‘The asteroids that are just bags of material – we call them rubble piles – can, on the other hand, blow apart into thousands of pieces. Those pieces could by themselves become dangerous.’

Dr Susorney is exploring what surface features of an asteroid can reveal about the structure of its interior as part of a project called EROS.

This information could be useful for future space mining companies who would want to know as much as possible about a promising asteroid before investing into a costly prospecting mission as well as knowing more about potential threats.

‘There are thousands of near-Earth asteroids, those whose trajectories could one day intersect with that of the Earth,’ she said. ‘We have only visited a handful of them. We know close to nothing about the vast majority.’ 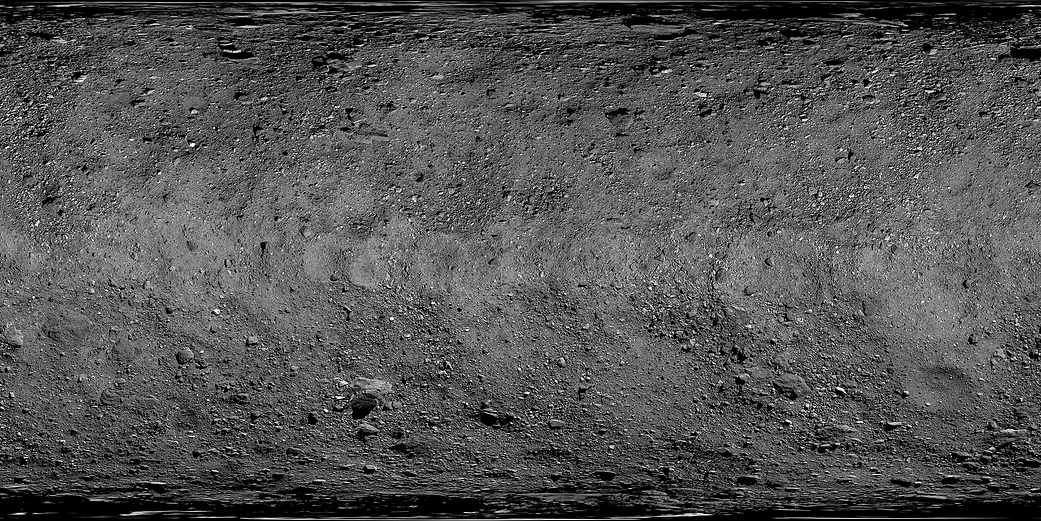 During the fourth ever landing on an asteroid, Bennu was mapped thanks to a mosaic of images collected by NASA’s OSIRIS-REx spacecraft. Peering inside an asteroid is the next crucial step. Image credit - NASA/Goddard/University of Arizona

Dr Susorney is trying to create detailed topography models of two of the most well-studied asteroids – Itokawa (the target of the 2005 Japanese Hayabusa 1 mission) and Eros (mapped in detail by the NEAR Shoemaker space probe in the late 1990s).

‘The surface topography can actually tell us a lot,’ Dr Susorney said. ‘If you have a rubble pile asteroid, such as Itokawa, which is essentially just a bag of fluff, you cannot expect very steep slopes there. Sand cannot be held up into an infinite slope unless it’s supported. A solid cliff can. The rocky monolithic asteroids, such as Eros, do tend to have much more pronounced topographical features, much deeper and steeper craters.’

Susorney wants to take the high-resolution models derived from spacecraft data and find parameters in them that could then be used in the much lower resolution asteroid shape models created from ground-based radar observations.

‘The difference in the resolution is quite substantial,’ she admits. ‘Tens to hundreds of metres in the high-res spacecraft models and kilometres from ground-based radar measurements. But we have found that, for example, the slope distribution gives us a hint. How much of the asteroid is flat and how much is steep?’

Dr Ferrari is working with the team preparing the DART mission. As part of a project called GRAINS, he developed a tool that enables modelling of the interior of Dimorphos, the impact target, as well as other rubble pile asteroids.

‘We expect that Dimorphos is a rubble pile because we think that it formed from matter ejected by the main asteroid, Didymos, when it was spinning very fast,’ Dr Ferrari said. ‘This ejected matter then re-accreted and formed the moon. But we have no observations of its interior.’

An aerospace engineer by education, Dr Ferrari borrowed a solution for the asteroid problem from the engineering world, from a discipline called granular dynamics.

‘On Earth, this technique can be used to study problems such as sand piling or various industrial processes involving small particles,’ Dr Ferrari said. ‘It’s a numerical tool that allows us to model the interaction between the different particles (components) - in our case, the various boulders and pebbles inside the asteroid.’

‘Asteroids are the only objects in our solar system that are more or less unchanged since the very beginning of the solar system’s formation.’

The researchers are modelling various shapes and sizes, various compositions of the boulders and pebbles, the gravitational interactions and the friction between them. They can run thousands of such simulations and then compare them with surface data about known asteroids to understand rubble pile asteroids’ behaviour and make-up.

‘We can look at the external shape, study various features on the surface, and compare that with our simulations,’ Dr Ferrari said. ‘For example, some asteroids have a prominent equatorial bulge,’ he says, referring to the thickening around the equator that can appear as a result of the asteroid spinning.

In the simulations, the bulge might appear more prominent for some internal structures than others.

For the first time, Dr Ferrari added, the tool can work with non-spherical elements, which considerably improves accuracy.

The model suggests that in the case of Dimorphos, the DART impact will create a crater and throw up a lot of material from the asteroid’s surface. But there are still many questions, particularly the size of the crater, according to Dr Ferrari.

‘The crater might be as small as ten metres but also as wide as a hundred metres, taking up half the size of the asteroid. We don’t really know,’ said Dr Ferrari. ‘Rubble piles are tricky. Because they are so loose, they might as well just absorb the impact.’

No matter what happens on Dimorphos, the experiment will provide a treasure trove of data for refining future simulations and models. We can see whether the asteroid behaves as we expected and learn how to make more accurate predictions for future missions that lives on Earth may very well depend on. 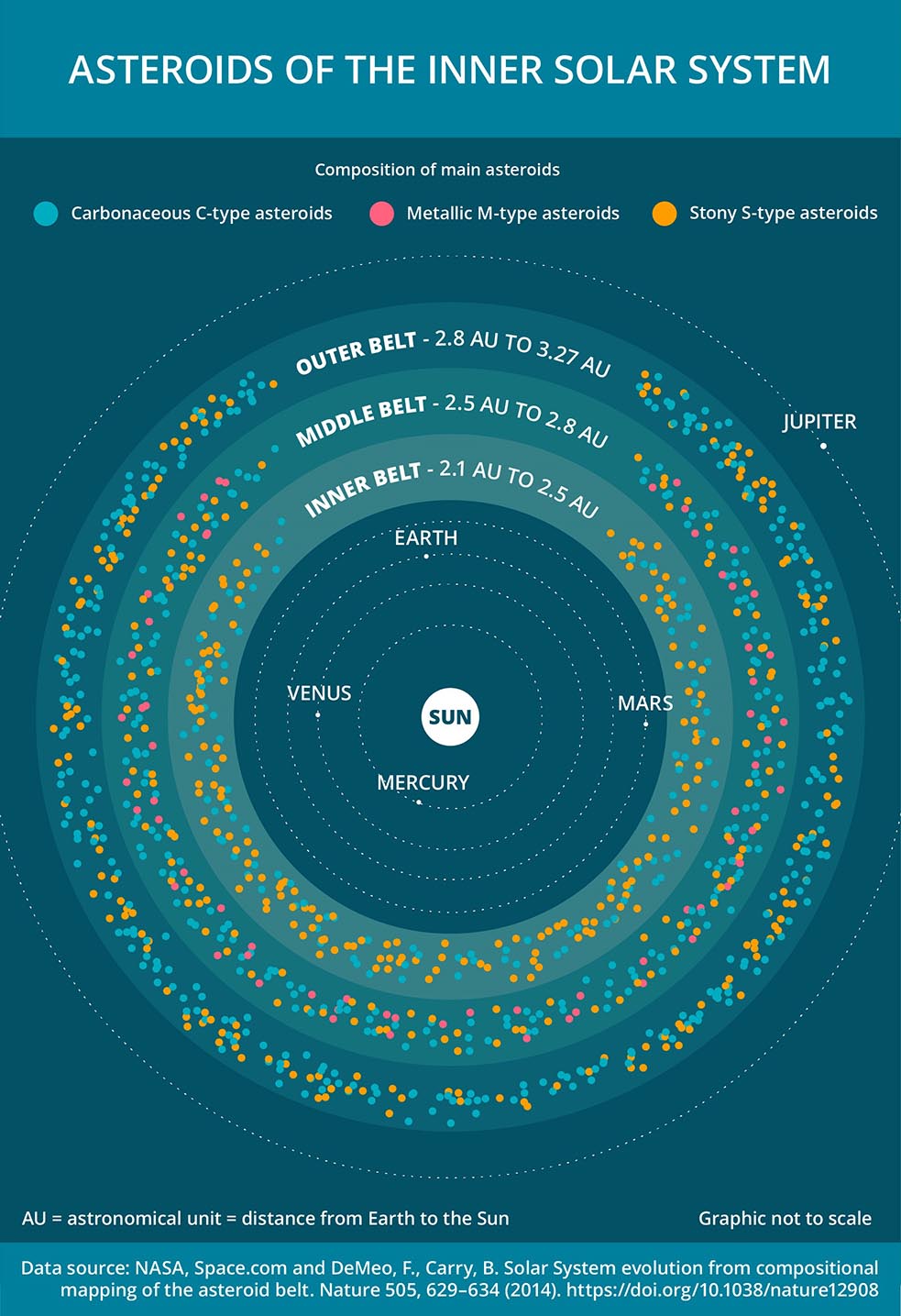 The solar system’s asteroid belt contains C-type asteroids, which likely consist of clay and silicate rocks, M-type, which are composed mainly of metallic iron, and S-type, which are formed of silicate materials and nickel-iron. Image credit - Horizon

This article was originally published on 19 April 2021.