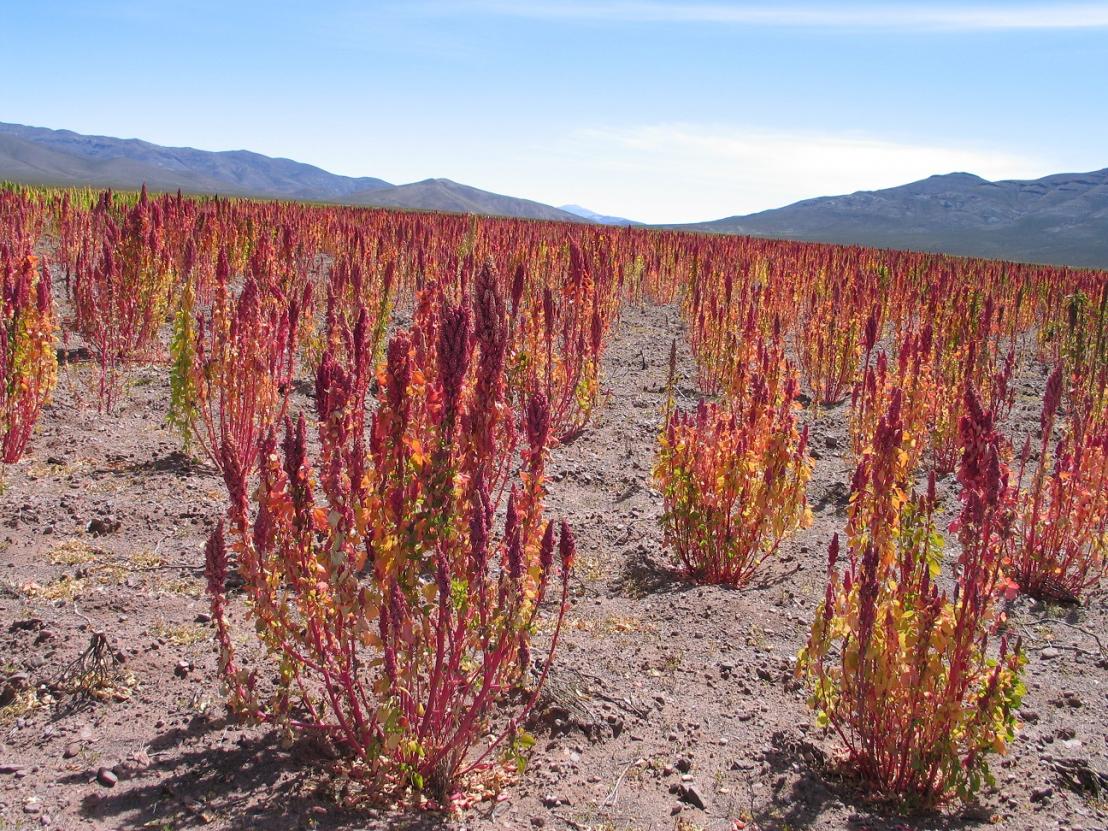 Farmers who grow single crops are particularly vulnerable to the effects of climate change, but now researchers are resurrecting ancient crop varieties to encourage diversity and offset the risks of extreme weather.

Intensively growing single crops for commercial purposes is the most common farming practice in Europe. These so-called cash crops include corn and wheat and they depend on stable weather to get a good harvest.

‘With climate change we will see much more drought in different places of the world, especially in the Mediterranean region, and large parts of Africa,’ said Professor Sven-Erik Jacobsen from the Department of Plant and Environmental Sciences at the University of Copenhagen, Denmark. ‘Even in north Europe we will see more drought and heavier rainfalls.’

An unusually hot or wet period could devastate harvests of traditional crops, but species originating in warmer climates could serve as a solution to European farmers under threat.

‘These crops could be the answer to the climate change effects that we will experience more and more,’ said Prof. Jacobsen, who is the project coordinator of PROTEIN2FOOD, an EU-funded project that’s exploring ancient crops and legumes to help make modern agriculture more sustainable.

‘We grow in the north, south, east and west of Europe and are learning about what we can grow in different places,’ said Prof. Jacobsen.

The researchers are focusing on three species of high protein quality – quinoa, amaranth and buckwheat - as well as legumes like pea, faba bean and lupin, chosen due to potential yield and desirable taste. All factors need to be addressed to convince farmers to move to new crops.

This will be a challenge as the current market demands cheap food and forces farmers to grow cash crops all year round, just to break even. Such intensive practices also put added pressure on water supplies and deplete overused soils of crucial nutrients. Add climate change to the mix and it puts our food supply systems at risk.

To give the incentive to switch from single cash crops to more diverse, resilient species, a different market needs to be established. PROTEIN2FOOD has partners who are making innovative food products out of the ancient crops and testing them on consumers to determine if they would sell.

This could even convince farmers raising animals to shift towards climate-friendly crops.

PROTEIN2FOOD is developing dairy alternatives using lupins for making cream and they are also looking to make vegetable patties with better textures and taste, as well as high protein breakfast cereals and snacks, protein bars, beverages and infant foods.

‘In the end we will have advice for farmers on how to grow these crops (as an alternative to farming meat) and what the industry can do to sell products to the consumer,' said Prof. Jacobsen.

Current trends are in their favour, with more diverse, sustainable products growing in demand. In fact, there is already a huge market for one ancient crop in particular.

In the sixteenth century the humble potato was brought to Europe from South America and has been a staple ingredient ever since. And it seems quinoa is following in its culinary footsteps.

Quinoa cultivation occurs now in more than 70 countries, including France, England, Sweden, Denmark, Holland and Italy. The demand is driven by quinoa’s low-gluten content that can make flour for bread and pasta that is suitable for people with coeliac disease, in which the small intestine is hypersensitive to gluten.

However, the majority of growers are still in its historic homelands – Peru, Bolivia, and Ecuador. According to Professor Pier Sandro Cocconcelli from the biotechnology research centre at the Catholic University of the Sacred Heart in Milan, Italy, there are both good and bad side effects from this quinoa rush.

‘In the north of Latin America there are communities that have improved their quality of life because of an increase of their production of quinoa,’ he said.

On the other hand, the demand from Europe and the United States has led to an increase in price for quinoa, which makes it difficult for some local Andean populations to access the crop.

‘A second problem has led to populations, in the mountain and coastal regions, applying more intensive agriculture and using harmful pesticides that are illegal in Europe, but not in these native countries. Meaning more harmful quinoa is left behind for the native populations,’ said Prof. Cocconcelli.

‘These crops could be the answer to the climate change effects that we will experience more and more.’

Quinoa has been a stable ingredient in the Andes for thousands of years, even before the rise of the Inca civilisation.

Prof. Cocconcelli is the coordinator of µ-Andes, an EU-funded project that examined Andean foods like quinoa, lama meat, fermented potatoes and chia, and then helped researchers in Andean regions improve the food safety of these products.

This means that Europe can safely continue importing quinoa while the supplies left behind for the locals won’t endanger anyone.

‘In Europe we do not produce enough food commodities for the entire population so we will need to import, but we want food that is safe and meets our standards. Improving food safety in these regions opens the possibility of more exportation while increasing the health and income of all the people working in the food chain,’ said Prof. Coconcelli.

According to the Food and Agriculture Organization (FAO) the worldwide demand for food is expected to rise 70 % by 2050.

Because agriculture both contributes to climate change and is affected by it, a more sustainable system is needed to secure global food supplies.

In response, Horizon 2020, the EU's funding instrument for research and innovation, has allocated almost EUR 4 billion to develop sustainable agriculture and address other food security challenges.