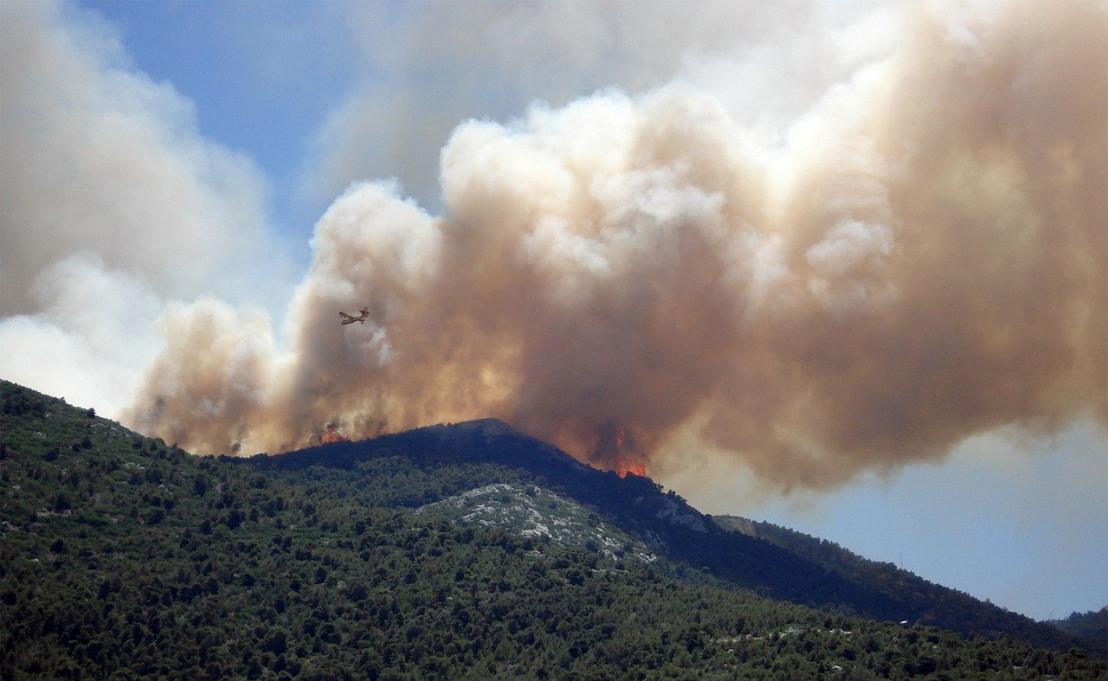 Smoke from wildfires can rise many kilometres into the stratosphere and cause air pollution in areas far away from where the flames actually were. Image credit - Pixabay/Saiho, licenced under Pixabay licence

Enormous plumes of smoke thrown into the atmosphere by uncontrolled wildfires may be affecting the health of people living hundreds of miles away.

Every year, thousands of fires engulf forests, grasslands and moors across Europe. In 2018, more than 204,861 hectares of land were left burnt in Europe and other countries around the Mediterranean, while the previous year wildfires destroyed over 1.2 million hectares. Blazes in the Arctic in June set a new record in carbon emissions in 18 years of monitoring.

As the trees, shrubs, grass and peat are engulfed by these fires, huge quantities of smoke, soot and other pollutants are released into the air. With large fires, the smoke can rise many kilometres into the stratosphere and spread across entire regions, causing air pollution in areas far away from where the flames actually were.

‘In the eastern Mediterranean we get smoke that blows down from forest fires in Russia and when it happens there is just hazy smoke everywhere,’ said Professor Athanasios Nenes, an atmospheric chemist at the Institute of Chemical Engineering Sciences in Patras, Greece. ‘It can be quite dramatic. They are affecting air quality over entire regions or parts of continents.’

Prof. Nenes is principal investigator of the PyroTRACH project, which is attempting to find out how emissions from wildfires – along with other types of biomass burning, such as domestic wood fires – change in the atmosphere and the impact this has on human health and climate.

Globally, wildfire smoke is estimated to cause over 339,000 premature deaths a year – far more than those who lose their lives directly in these blazes.

The team is taking regular air samples at three locations in Greece – Crete, Athens and Patras. These are being combined with samples provided by collaborators around the world including in the US, the Arctic, India, Europe, Vietnam and in the air above the south Atlantic Ocean.

‘When you look at these samples, you can always find a lot of particles in the air, but you can’t say for sure whether it has come from biomass burning,’ said Prof. Nenes. ‘The idea behind PyroTRACH is to see if we can identify specific signatures of fires and, in addition, track what happens to the smoke as it ages in the atmosphere.’ 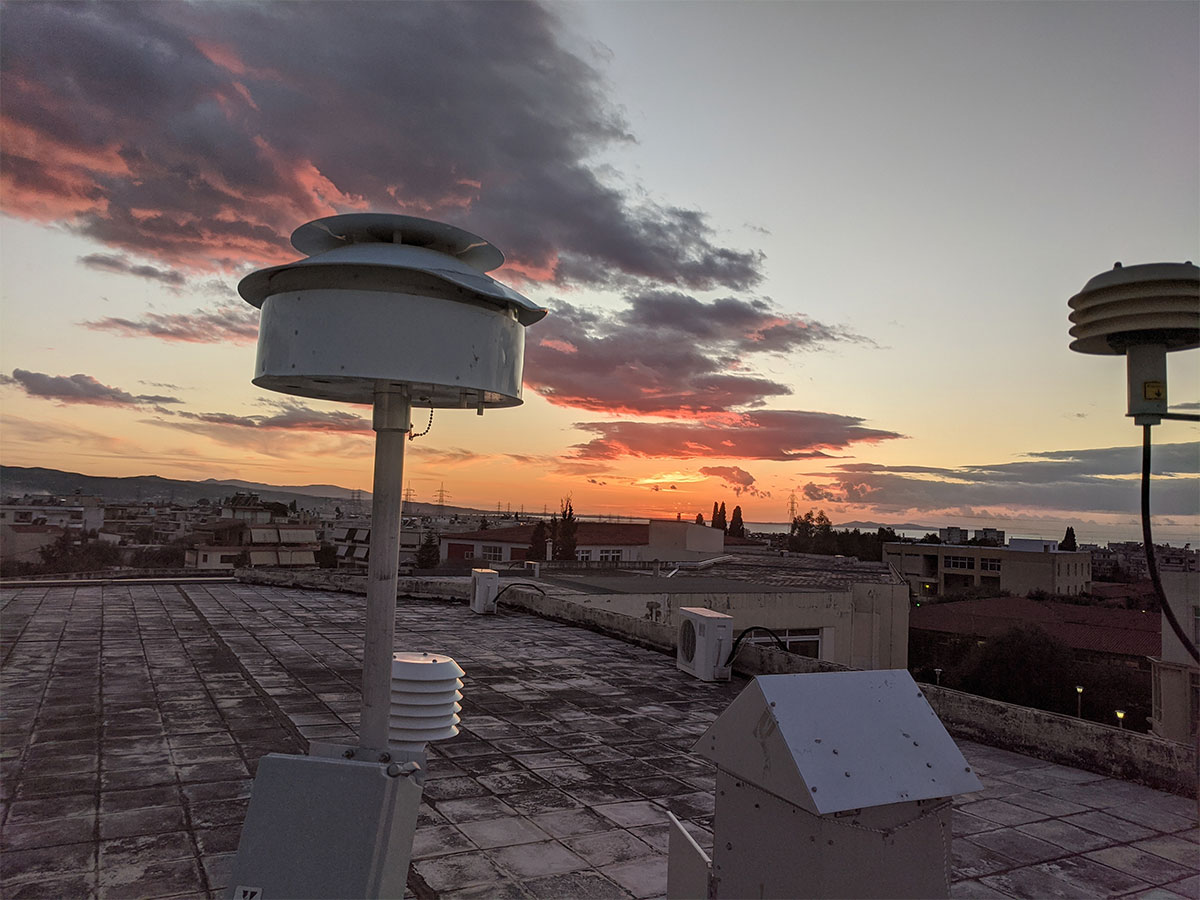 To do this, the researchers are using a special environmental chamber in the laboratory that replicates the conditions found in the atmosphere. They then generate fresh smoke samples by burning different types of plant material, which are then allowed to “age” in the chamber.

Over time they are able to see how the chemistry of the particles in the smoke changes when exposed to the atmosphere and daily patterns of sunlight and darkness. Portable chambers also allow them to age smoke directly produced from real fires in the outside environment.

‘We are trying to understand the lifetime of smoke in the atmosphere and how it chemically evolves,’ said Prof. Nenes. ‘We want to characterise the impacts it will have on human health and the climate. Does it become more toxic (with age), or have a greater (warming) effect on the climate (than currently thought), or supply more nutrients to ecosystems when it falls back to the ground?’

One of the key findings the team has made since the five-year project began in 2017 is that particles released from burning vegetation in forest fires become more toxic over time.

Smoke from forest fires can linger in the atmosphere for a couple of weeks as it spreads. While in the air the smoke particles chemically react with trace radicals – molecules with unpaired electrons – to undergo a process known as oxidation. This converts the compounds in the smoke particles into highly reactive compounds. When they are breathed in, these reactive compounds – known as free radicals – can damage cells and tissues in the body.

‘We know that breathing in smoke when you are close to a fire is not good, but we have seen that over time it gets worse – up to four times more toxic a day down the road,’ said Prof. Nenes, referring to some of their experiment results. These results showed smoke samples taken from the air more than five hours after they were released from a fire were twice as toxic than when they were first released and as they aged further in the laboratory the toxicity increased to four times the original levels.

‘This means that even if you are far away from a fire, if the smoke is being blown towards you, it can have a significant impact on health,’ he said. ‘People might not even be aware they are breathing in the fumes from a faraway forest fire, but it will be affecting their health.’

‘People might not even be aware they are breathing in the fumes from a faraway forest fire, but it will be affecting their health.’

While the exact health effects of breathing in this smoke are still to be fully understood, Prof. Nenes and his team will feed their results into another project called REMEDIA. It is looking at how air pollution affects the lungs as part of the Human Exposome Network, which focuses on what environmental exposures do to human health.

But reactive compounds from wildfire smoke are thought to have a number of short and long-term health effects.

This increase in toxicity is a particular concern as smoke from large wildfires is known to travel across whole continents and even oceans. Smoke billowing from forest fires in Alberta, Canada, for example, was tracked as spreading down the east coast of the US, across the Atlantic and into Europe in 2019. Similarly, smoke from the recent devastating fires in Australia engulfed South America and pollution from wildfires in Siberia have spread to western Canada and the US.

‘Wildfire smoke can circulate the globe,’ said Dr Mike Flannigan, director of the Canadian Partnership for Wildland Fire Science at the University of Alberta. ‘Smoke from intense fire can be injected into the upper atmosphere where strong winds – typically west winds – can carry it rapidly around the world.’

This means that large wildfires can have dramatic impacts on the air quality and visibility in cities far away from the source of the smoke, which can then make urban air pollution worse, increasing the risk of health problems and deaths among those living there. 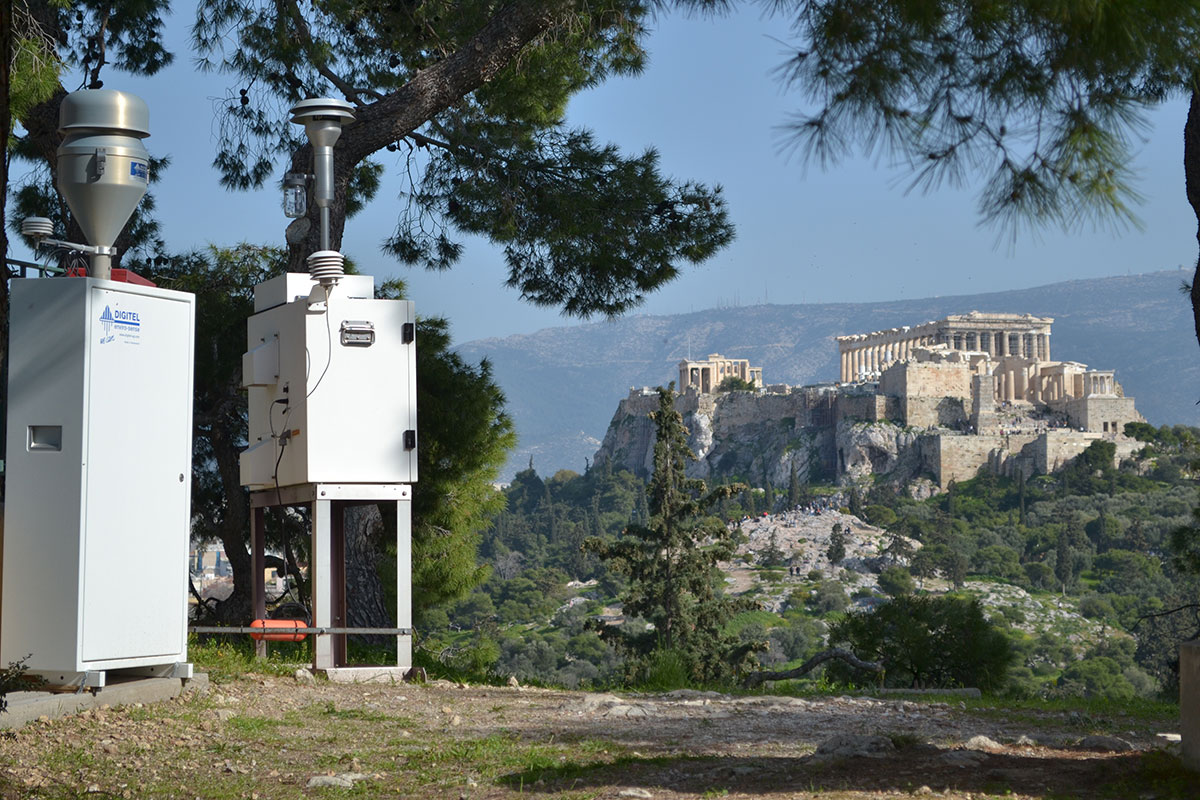 Air pollution picked up by samplers, such as the one in Patras, Greece, could have come from fires thousands of kilometres away. Image credit - Spiro Jorga

In Europe there are on average 65,000 wildfires every year, but the region is also engulfed by seasonal clouds of smoke from blazes further afield too.

Through the colder winter months domestic wood burning contributes a significant fraction of the smoke in the atmosphere, particularly in urban areas, according to Prof. Nenes.

More work is needed to understand the many sources of pollution in the air. Unravelling these sources is the goal of the Aeromet project. It is developing new ways of better analysing the aerosols and particles that pollute the air, particularly in urban areas across Europe. Currently it is difficult to distinguish which come from natural sources – such as dust blown into the air and salt lifted off the oceans by the wind – and those that come from fires, vehicles, industry and other human activities.

Improving the accuracy of how these are measured and identified could not only help authorities monitor air pollution better, but also ‘potentially help to identify critical single sources of particles and to propose appropriate counter-measures to improve air quality’ based upon the findings, says Dr Burkhard Beckhoff, coordinator of the Aeromet project and a researcher at Germany’s Physikalisch-Technische Bundesanstalt in Berlin.

Prof. Nenes hopes that characterising the pollution from wildfires and domestic woodburning could help to improve climate change models as some of the soot released by fires – known as brown carbon – plays a considerable role in absorbing heat from the sun, and makes global warming worse.

‘The smaller brown carbon molecules tend to bleach quite quickly but larger ones are more resilient, creating a low but persistent heating effect,’ he said.

Knowing how much of this brown carbon is produced in wildfires and domestic woodburning would allow climate scientists to make better climate predictions.

With climate models already predicting that wildfires are likely to become more common and intense as global temperatures increase, and domestic wood burning on the rise, the smoke they produce could pose an even greater risk to human health and the environment, says Prof. Nenes.

‘I grew up being able to see the effect fires have on our air here in Greece,’ he said. ‘It is alarming to think about what we are doing to ourselves and the environment. But hopefully as we understand more about this, we can contribute to policies that should be developed to help mitigate the impact of these fires.’

Robot lawnmowers converted into hedge trimmers and websites that help you design your flower beds are seeding the future of home gardening.
END_OF_DOCUMENT_TOKEN_TO_BE_REPLACED