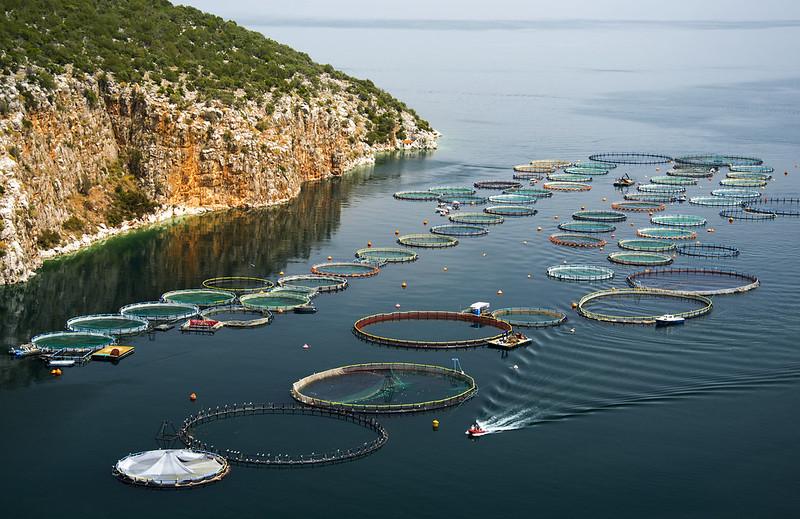 Salmon farmers battling large numbers of parasites that flourish on fish farms are seeking – and finding – new ways to cut their losses and protect marine wildlife.

About 20% of farmed salmon in Norway die as a result of parasites, according to Seafarm Development, a company developing technologies for fish farms, and researchers say new strategies are vital to prevent further damage to the sector and to safeguard local wild fish.

They warn that the number of parasites is rising with global warming, and as fish farms become more common.

Sea lice feed off salmon skin, mucous and muscle, and they can grow up to 18mm long. They thrive in densely populated farm cages where they can easily jump from fish to fish.

And their peak reproductive season – when a female lays up to 2,000 eggs a month – has lengthened because of rises in sea temperatures in the last five to ten years, says Davidsen.

Farmers often used harsh chemical treatments to rid their fish of the pests, but these are becoming less effective and there are concerns about the impact of the treatments on the surrounding wildlife and the fish themselves.

Between 10% and 15% of Norway’s farmed salmon die of stress caused by the sea lice treatment. Just 5% are directly killed by the parasites, says Davidsen.

‘There’s been a lot of reactive measures in the last three to five years,’ said Davidsen. Farmers are now seeking preventive measures so their fish ‘can be left in peace,’ he says.

Davidsen’s team developed a netting through a project called the Seafarm Pulse Guard that covers the cages and emits electrical pulses that kill off the larvae. The technology has been trialed on three farms and found to kill between 60% and 80% of larvae, he says. He hopes it will now be used by many more farmers.

But it cannot be used in isolation, Davidsen adds. Other strategies are also needed.

These include a new technique being piloted to rear fish in tanks on land until they reach 0.5 kg – they are usually put in cages at 0.1kg – before putting them in ocean cages. At this size, they are more resilient to parasites.

Other strategies include putting fish farm cages in the open ocean where they are exposed to strong currents and storms which make it harder for the sea lice to jump between fish. Another is to keep them at deeper levels where there are fewer naturally occurring sea lice.

‘There are many different ways in which a parasite can produce problems and for this reason it’s so difficult to quantify their impact.’

Environmentalists are concerned about the impact of sea lice on local wild salmon which swim close to the infected fish farms as they migrate to and from their spawning grounds.

Up to 30% of adult wild Atlantic salmon exposed to areas full of fish farms die as a result of the lice.

Norway has introduced strict regulations, as well as helped fund the development of new technologies and strategies, to try and control the pests.

The country’s fish farms must do a weekly count of the number of parasites on their fish. If they average less than 0.5 adult female lice per salmon, they are granted licenses to expand the tonnage of fish on their farm.

‘This industry is so important for Norway, and globally because of the food product. I think all the efforts … from governments down to fish farmers, will give us great results in three to five years’ time.’

Sea lice are probably the most researched fish-farm parasite, but many others are also creating problems for the industry. Some authors have estimated their total economic impact at between $1bn and $9.6bn a year globally, says Dr Ariadna Sitjà-Bobadilla, director of Spain’s Instituto de Acuicultura Torre de la Sal (CSIC).

Many parasites do not kill fish, but they affect their growth and weaken them, making them more prone to dying from stress or disease. ‘There are many different ways in which a parasite can produce problems and for this reason it’s so difficult to quantify their impact,’ she said.

Until recently, the EU prioritised research into other types of diseases, including furunculosis - a highly contagious and deadly bacterium which infects trout, salmon and other fish – and infectious pancreatic necrosis. But now that many bacterial and viral diseases have been dealt with, the seriousness of parasites has become more visible.

‘Now they are realising that parasites are there, and they are a problem,’ she said.

Rising sea and river temperatures are boosting many parasite populations that thrive in and around fish farms, says Dr Sitjà-Bobadilla. Some are also spreading to more northerly regions as a result, she says.

‘It’s really a concern … particularly those parasites that can attack many different fish species,’ she said.

Dr Sitjà-Bobadilla is coordinating a project called ParaFishControl, which has sequenced the genomes of parasites, giving researchers vital information for developing drugs ‘very fast’ in the coming years.

The project has been researching vaccines for some parasites, including Ichthyophthirius multifiliis, which causes white spot disease in rainbow trout and common carp among others, and Philasterides dicentrarchi, which attacks turbot.

The researchers are also developing products that can be introduced into the feed to make fish more resistant to the pests.

‘We cannot destroy all parasites, it’s impossible, so we need … a bunch of different strategies to control the impact of the parasite on the farm,’ said Dr Sitjà-Bobadilla.

She says farmers should use good management techniques and only turn to drug and chemical treatments when absolutely necessary to kill off the parasites.

‘This is more environmentally sustainable, and has a lower cost for the farmer,’ she said.

Like Davidsen, she is optimistic that the pests can be curbed.

‘I think in the future parasites are going to be much more controlled than they are now, especially under the European way of producing fish where everything is very (regulated),’ she said.

A better understanding of how sand behaves in the wind should help protect tracks and trains.
END_OF_DOCUMENT_TOKEN_TO_BE_REPLACED

Cancer research needs to change so that cancer treatment can become truly personalised, according to Professor Martine Piccart.
END_OF_DOCUMENT_TOKEN_TO_BE_REPLACED