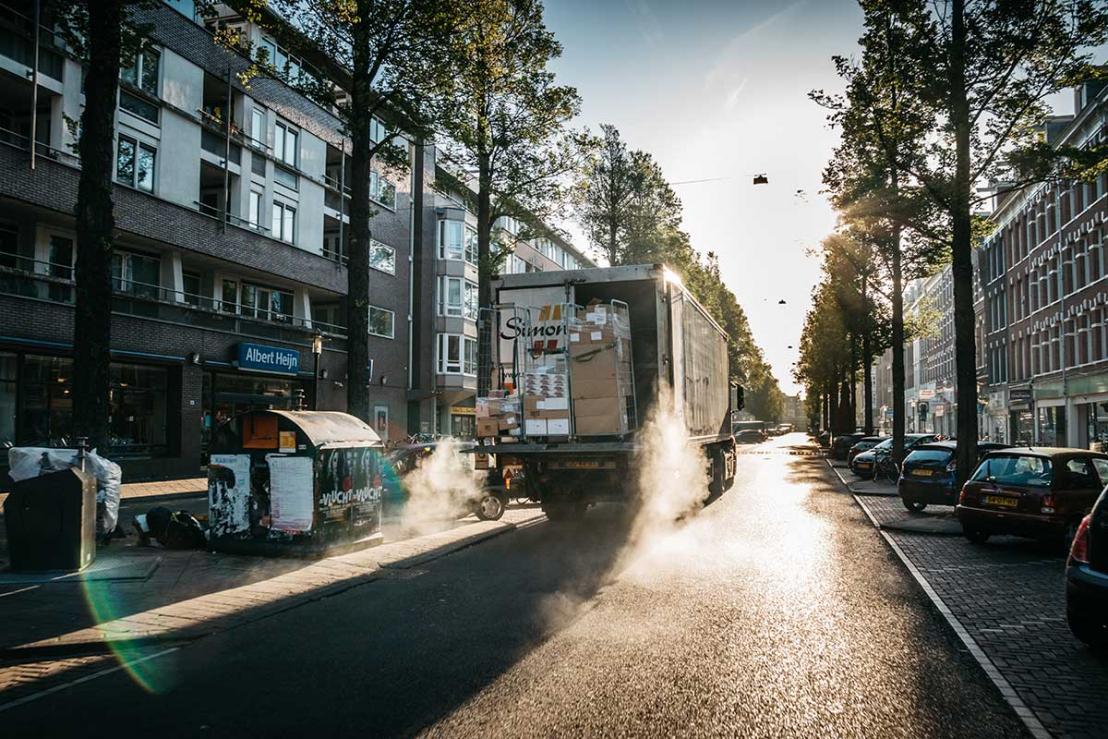 Across Europe’s cities, the demand for delivery services is increasing. But these deliveries affect urban life as they add to traffic congestion, noise and pollution and many cities are now trying out alternative modes of transport that could help.

Known as ‘last-mile’ deliveries, this system involves the transport of goods and services from a depot in the outskirts to the city centre. They are expected to grow by more than 16% annually from 2019 to 2027.

In Barcelona, Spain, a project called GrowSmarter wanted to address the spike in small parcel deliveries resulting from an increase in online shopping. They piloted a delivery service using electric bikes to businesses and consumers in the old town for two years.

The old town is a densely-populated area with narrow streets, making it hard for delivery vans to access. Goods can only be delivered by standard vehicles in the morning and at night due to traffic regulations. But bikes aren’t subject to delivery windows.

‘This combination makes it ideal to do these deliveries with electric bikes,’ said Gonzalo Cabezas, project manager at Barcelona City Council.

The team worked with a small e-bike delivery company called Vanapedal which provided the service. The city council set up a distribution centre at the edge of the old town which Vanapedal could use free of charge. Vans from different shipping services would deposit packages for last-mile delivery by electric bike or tricycle. In return, Vanapedal had to provide business data to help gauge the project’s success.

Three tricycles out of the initial nine bikes used were equipped with sensors to take measurements too. ‘We installed some equipment that include environmental sensors and there was a geolocation sensor to know exactly where the tricycles are,’ said Cabezas.

The trial ended in December and was deemed a success. During the two years, 200,000 packages were delivered and the rate of successful deliveries was 92.7%. Since the service was provided to a pre-defined area, it allowed the delivery people to get to know their main clients and reschedule deliveries at a convenient time.

‘Successful deliveries are higher than from standard providers,’ said Cabezas. ‘We are quite happy with this solution and it works financially from a business perspective.’

There was also a clear environmental impact. Carbon dioxide emissions were reduced by 95.9% and there was a 21.7% reduction in noise.

Vanapedal is now continuing with the delivery service and there are also plans to replicate the scheme elsewhere in the city.

But e-bikes aren’t always the best solution. When large quantities of goods are being delivered, vans and trucks are still necessary.

In the past decade in Stockholm, Sweden, an increase in delivery trucks due to major construction sites requiring supplies and more people shopping online has contributed to the growing problem of daytime traffic congestion. Spreading out deliveries over 24 hours could help. 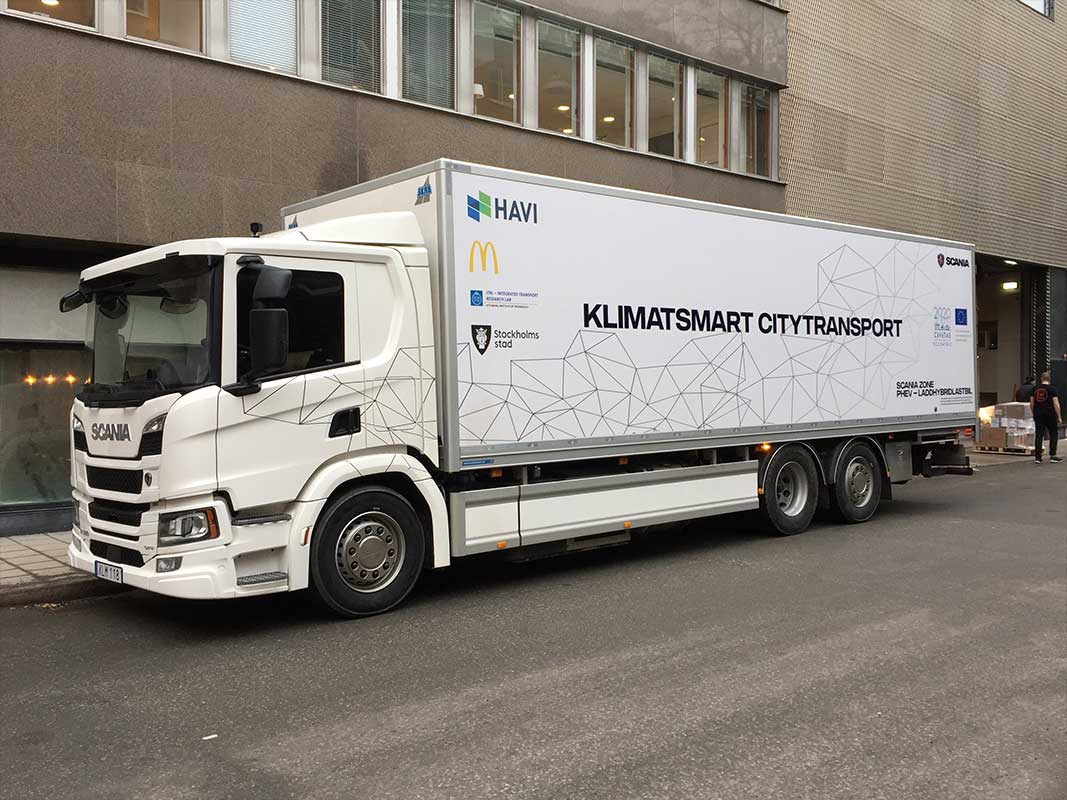 The hybrid truck trialled in Stockholm, Sweden, runs on hydrotreated vegetable oil outside the city and electricity in the centre, and delivered to six restaurants on a single charge. Image credit - Paul Fenton

‘If you can get trucks delivering at night then there will be much less congestion during the daytime, which is better,’ said Paul Fenton, the site manager of a project called Civitas Eccentric.

Due to noise regulations, heavy lorries aren’t allowed to operate at night.

To overcome this issue, as well as that of pollution, Civitas Eccentric is testing a plug-in hybrid electric truck. It has been granted an exemption to make night deliveries to a few McDonald’s restaurants because it is silent when driving on electric power.

The vehicle, provided by the truck manufacturer Scania, was used during an 8-month trial that ended in August 2019. When driving from a depot outside the city, it ran on biofuel - Hydrotreated Vegetable Oil (HVO). But when it reached the city centre, which is a low-emissions zone for heavy goods vehicles, it switched to electric power. The truck made deliveries to six restaurants within the city on a single charge.

‘Deliveries got done quicker with less kilometres driven because the vehicle wasn’t stuck in traffic,’ said Fenton. ‘Also, we were using a cleaner vehicle which is better for air pollution.’

Substantial data was collected to assess the effectiveness of the scheme using environmental sensors on the truck and noise monitors at specific locations on its route. Preliminary results are promising. Nitrogen oxide emissions were slashed by almost 80% while particulate matter emissions, which includes smoke and soot particles, dropped by 28%.

The test driver also reported that he preferred to work at night since it was less stressful. It was easier to find a parking space, for example, and the restaurant staff had time to receive deliveries since there were fewer customers at this time.

‘The more companies that try to make the transition, the more vehicles that will get produced.’

The team is keen to analyse the impact of the service on existing background noise. The restaurants are located in areas that are already quite noisy at night so they don’t want to add to it. ‘I think the data is showing that it’s pretty good,’ said Fenton. ‘There isn’t a major negative impact because of the deliveries.’

Fenton thinks there is potential to introduce greener delivery vehicles in other cities too. But alternative fuel vans and trucks are still only available in limited quantities which is an issue when scaling up services. ‘It's a little bit chicken and egg,’ said Fenton. ‘The more companies that try to make the transition, the more vehicles that will get produced.’

However, concerns about the safety of silent vehicles, which can’t be heard by pedestrians and visually-impaired people, for example, has led to the EU requiring all electric vehicles to have noise-emitting devices, which make the sound of a traditional engine, by July 2021. The device must be used when starting up until they reach a speed of 20km/h and when reversing. Above this speed, the sound of the tyres on the road and wind noise are audible so a warning system isn’t needed.

It is unclear how this will affect the potential for night deliveries. ‘My hunch is that the noise generated by the sound (device) will probably not exceed the level of background noise in most urban contexts, and therefore not be a big problem,’ said Fenton.

In many cases, new infrastructure such as charging points will have to be put in place too. But trials like this one are helping to assess where drivers would need to plug in their vehicle. If a truckload can be delivered on a single charge, for example, then charging stations would be essential near terminals outside the city centre.

‘There is a lot of learning involved,’ said Fenton. ‘You have to test and try to find ways to overcome the barriers.’

Of all the natural disasters occurring in recent decades, heatwaves have caused the greatest loss of human life.
END_OF_DOCUMENT_TOKEN_TO_BE_REPLACED