Does an ally against climate change lie beneath our feet? 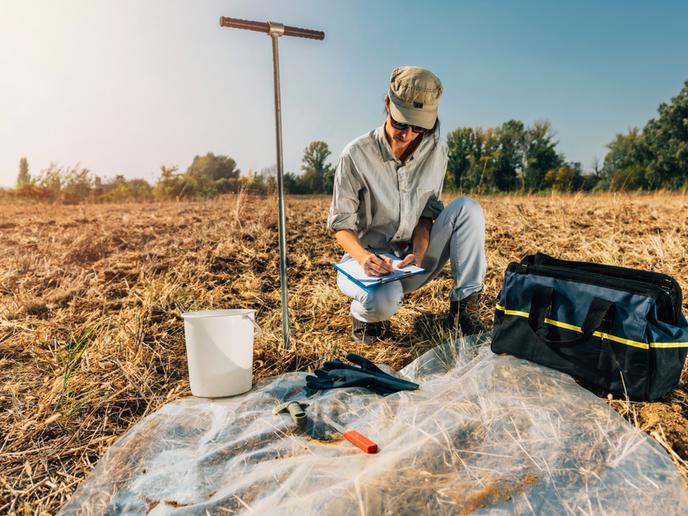 By enhancing soil’s ability to store carbon, the ground we walk on could play an essential role in keeping carbon dioxide out of the air.

‘With a huge potential to act as a carbon sink, the soil that sits right under our feet could be at the front lines of climate change,’ said Dr Dragutin Protic, CEO of GILab, a company dedicated to developing solutions based on ICT and geoinformatics.

A carbon sink is a reservoir capable of accumulating and storing carbon for an indefinite period. In doing so, it lowers the concentration of carbon dioxide (CO2) from the atmosphere.

According to Dr Protic, who cited some recent scientific research, soil has the potential to remove an estimated 1.09 gigatonnes of CO2 per year.

With a huge potential to act as a carbon sink, the soil that sits right under our feet could be at the front lines of climate change.

From carbon sink to carbon emitter

Even though soil carbon sequestration appears to be a natural, no-regret solution to mitigating climate change, after decades of poor land management, Europe’s soils have been significantly degraded. ‘Soil degradation leads to a reduction in soil organic matter (SOM), which is where carbon is stored,’ explained Dr Protic. ‘In fact, according to recently published scientific research, nearly half of EU soils now have less than 2% SOM.’

As a result, instead of capturing carbon, soil is releasing carbon into the air, setting the scene for a climate catastrophe.

‘Europe’s croplands are losing carbon at a rate of 0.5% per year,’ warned Jean-Francois Soussana, a researcher and vice-chair at INRAE, (France’s National Research Institute for Agriculture, Food and Environment), and a member of the Mission Board on Soil Health and Food. ‘The picture is even more dire for peatlands which, as they are being rapidly drained, release huge amounts of carbon into the atmosphere.’

Increasing carbon sequestration in soil enhances its resilience to the rapidly changing climate.

In an effort to reverse this trend, both Dr Protic and Soussana are leading efforts to preserve and enhance soil’s carbon sequestration capabilities. ‘Increasing carbon sequestration in soil enhances its resilience to the rapidly changing climate,’ said Soussana. ‘It also improves the quality and fertility of agricultural soils, as well as contributing to food security.’

As both researchers point out, storing carbon in soil organic matter requires healthy plants, high-quality soils and, most importantly, smart farmers. ‘It seems crucial to empower farmers and other stakeholders through effective knowledge creation and sharing,’ remarked Soussana.

One initiative helping to facilitate this knowledge exchange is the AgriCapture project. Led by Dr Protic, the project is developing a platform that uses Earth Observation to help farmers and public authorities explore opportunities in regenerative agriculture - a method of producing food that has a positive impact on the environment.

Earth Observation uses remote sensing technologies, such as the EU’s Copernicus satellite system, along with various ground-based techniques, to gather information about the Earth’s physical, chemical and biological systems. Using this data, the platform will map soil carbon and monitor soil carbon sequestration across Europe.

‘This will allow farmers to visually see how implementing regenerative agriculture practices could increase both carbon sequestration and farm profitability,’ explained Dr Protic. ‘It will also allow farmers to monitor their carbon release/capture ratio to ensure that all carbon offsetting goals are being met.’

The AgriCapture project is also working to verify and support the implementation of regenerative agricultural practices that, if successful, would result in the certification and generation of ‘carbon credits’.

Putting farmers at the vanguard of carbon sequestration

According to Dr Soussana, who leads the initiative, by bringing together data from satellites, soil surveys, long-term experiments and CO2 flux measurements, the system will empower farmers to be at the vanguard of soil carbon sequestration.

Beyond simply enabling farmers to monitor soil organic carbon, Soussana says the system can help teach us to create healthy soil by supporting nature-based carbon sequestration. ‘By ensuring that farmers know exactly how much carbon is being stored in their soil, they will be well positioned to make informed decisions that will lead to both healthy yields and a healthy planet,’ said Dr Soussana.

Through initiatives like AgriCapture and CIRCASA, Dr Soussana is confident that Europe will be able to enhance its soils’ carbon sequestration levels, thus ensuring that soil remains a carbon sink and not a carbon emitter.

‘We really do not have a choice, and we have to act now,’ stated Soussana. ‘Without carbon sequestration and the conservation of soils, I don’t see a viable route to staying within the +2°C by 2030 as proposed by the Paris Climate Agreement or to achieving the ambitious goals of the European Green Deal.’

Laying the foundation for a common EU framework to preserve, protect and restore soil, the Commission is adopting a new Soil Strategy this year. In addition, a Horizon Europe mission will lead the transition towards healthy soils for people, nature and the climate by 2030.

This article is part of our Monthly Focus titled Bringing Europe's soils back to life. The research in this article was funded by the EU. If you liked this article, please consider sharing it on social media.