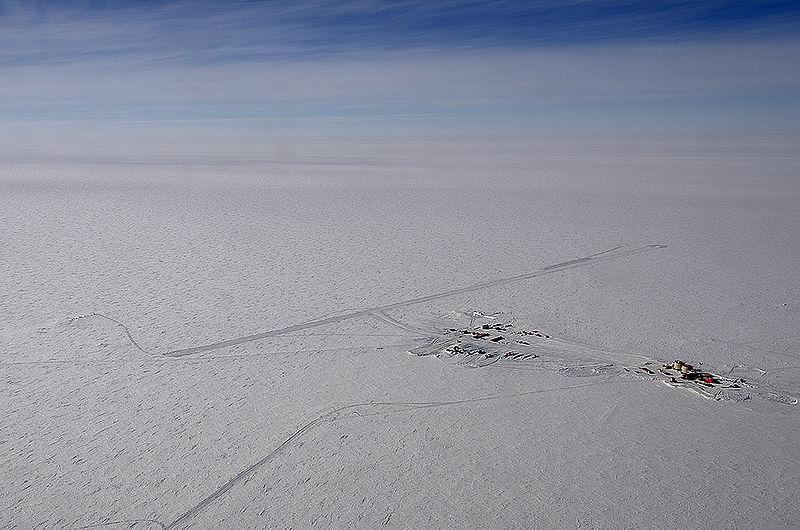 Scientists will have to drill at a depth of nearly 3km to retrieve some of the oldest ice that can tell us about the past and future of climate. Image credit - NASA/Michael Studinger

An ambitious mission to drill into the Antarctic ice sheet to extract some of the oldest ice on the planet will provide vital clues about a mysterious shift in the behaviour of our planet’s climate.

Drilling into the ice of Antarctica is like going back in time. Frozen within it are relics from long past eras – dust that settled on the surface long ago and bubbles of air trapped by ancient blizzards.

For scientists hoping to understand how the Earth’s climate has changed in the past, it is a treasure trove. Packed into every metre of ice are thousands of years-worth of these precious artefacts.

Now an international team of researchers are hoping to drill more than 2,700 metres below the surface in their search for ice that is up to 1.5 million years old.

Their aim is to extract ice cores that will help them to piece together what happened to our planet’s climate during a crucial and mysterious period of change that occurred around 1 million years ago.

‘Over the last few million years, the Earth’s climate has oscillated between cold glacial periods of time and shorter, warmer interglacial periods,’ said Professor Carlo Barbante, an analytical chemist at Ca'Foscari University of Venice, Italy, and coordinator of the Beyond EPICA project that is hoping to recover the ice cores.

‘We know from information contained within marine sediments that we would have one warm and one cold period every 41,000 years, but then around 1 million years ago, this cycle changed to have a periodicity of about every 100,000 years.

‘We don’t know exactly why this change occurred. Most probably it was due to changes in the carbon dioxide cycle.’

Much of the glacial cycle on Earth is driven by our planet’s less than perfect orbit around the sun and the fact that it tends to wobble on its axis. But other changes, such as volcanic activity that throws aerosols into the air and the levels of greenhouse gases in the atmosphere, also influence this cycle.

By analysing ice dating back to around the time of the change in the glacial cycle, Prof. Barbante and his colleagues hope to find preserved dust, gas and isotopes that can tell them what may have led to this shift in the climate.

‘Understanding this period from the past is important because it can help us to answer questions we have about the sensitivity of our climate today,’ said Prof. Barbante.

While scientists know that increases in greenhouse gases cause the climate of the planet to warm, it is difficult to model the exact impacts of this due to the complexity of the climate system.

Correlating climate changes in the past to carbon dioxide concentrations can help make better predictions about what our own greenhouse gas emissions will do to the planet.

‘We hope to fill in gaps in our knowledge about how the Earth will respond to changes in greenhouse gas concentrations,’ added Prof. Barbante.

Prof. Barbante and his colleagues are hoping to build on the success of a previous project called the European Project for Ice Coring in Antarctica (EPICA), which drilled to a depth of 3,270 metres at a site called Dome C, close to the French-Italian research facility Concordia Station on the Polar Plateau of East Antarctica. By 2006, after 10 years of drilling, the team had obtained ice that was up to 820,000 years old.

The Beyond EPICA team have spent the past three years conducting new surveys with the help of radar mounted on aircraft and sledges to identify a site with older ice.

‘This precious ice gives us a chance to look back to a time when the world was different.’&nbsp;

The key has been to find parts of the ice sheet that are deep enough to contain ice that is over a million years old, but not so deep that the pressure from the ice above causes the bottom to melt.

‘We had two candidate sites – about 40km from the Concordia base in an area known as Little Dome C and another close to a Japanese base called Dome Fuji Station,’ says Professor Olaf Eisen, a glaciologist at the Alfred Wegener Institute Helmholtz Centre for Polar and Marine Research in Bremerhaven, Germany, who led the search for the new drilling site.

‘We wanted nice layered ice, with continuous accumulation of snow at the surface and bed rock that is not too mountainous so it doesn’t disturb the stratigraphy (layers) of the ice.’

The radar images allowed the team to see distinct boundaries in the ice that they could use to estimate its age and also see the shape of the rock beneath. They eventually settled on the site at Little Dome C. The underlying topography of the land and variations in the amount of ice that has accumulated above it over time mean they will not need to drill as deep as they did with the original EPICA project to reach the oldest ice. They estimate they will find ice more than 1 million years old at a depth of about 2,700 metres.

‘The ice on the plateau there is nicely stratified and undisturbed,’ added Prof. Eisen.

The team are now embarking on the next phase of the project, which is to start drilling and retrieving the ice. At the end of last year, they began building their camp at the site and preparing a trench where they will drill a preparatory hole through the first 20 metres of porous snowpack, or ‘firn’, on top of the ice sheet.

They aim to drill the first 150 metres into the ice over the next Antarctic summer between November 2020 and January 2021. As they drill down, the team will pump a thick, non-toxic fluid into the resulting borehole to prevent the pressure of the ice sheet from closing it up.

‘We hope to reach the bed rock within three to four seasons, if everything goes well,’ said Prof. Barbante. ‘This precious ice gives us a chance to look back to a time when the world was different. Human beings were not around, at least not as Homo sapiens, and the climate was in a very different mode.

‘It is fascinating archive of the past, but it can help us also understand the future.’

Cancer research needs to change so that cancer treatment can become truly personalised, according to Professor Martine Piccart.
END_OF_DOCUMENT_TOKEN_TO_BE_REPLACED