The standard diet for much of the world – industrially produced calories and plenty of meat and dairy – is already known to be bad for people’s health, but it could also spell disaster for the environment.

Relying on individuals to spontaneously change the way they eat, however, is unlikely to make a dent, without transformational change in the food systems that determine what goes on our plates.

‘People won’t magically change their diets,’ said Dr Marco Springmann, a senior researcher on environmental sustainability and public health at the University of Oxford’s Future of Food programme in the UK. ‘It requires a great food transformation.’

Rearing and farming livestock is responsible for 14% of all greenhouse gas emissions from human activity. Globally, livestock release the equivalent of 7.1 gigatonnes of carbon dioxide into the atmosphere as they digest their food. In all, the global food system produces up to 37% of total man-made emissions.

‘Without dietary changes we can’t stay within 2 degrees,’ said Dr Springmann. He was referring to the Paris Climate agreement target of keeping global warming to well below 2°C above pre-industrial levels. The Earth has already warmed 1°C.

Dr Springmann worked with a team of scientists who developed a ‘planetary health diet’, which they claim could feed the expected world population of 9.7 billion in 2050 enough nutritious calories without destroying the environment.

For many in developing countries it would mean eating more. For those eating a Western diet, it means eating less meat and dairy.

The bulk of the diet comprises grains, nuts, beans and other plant proteins, together with plenty of fruit and vegetables. Just 12% of calories comes from animal produce. 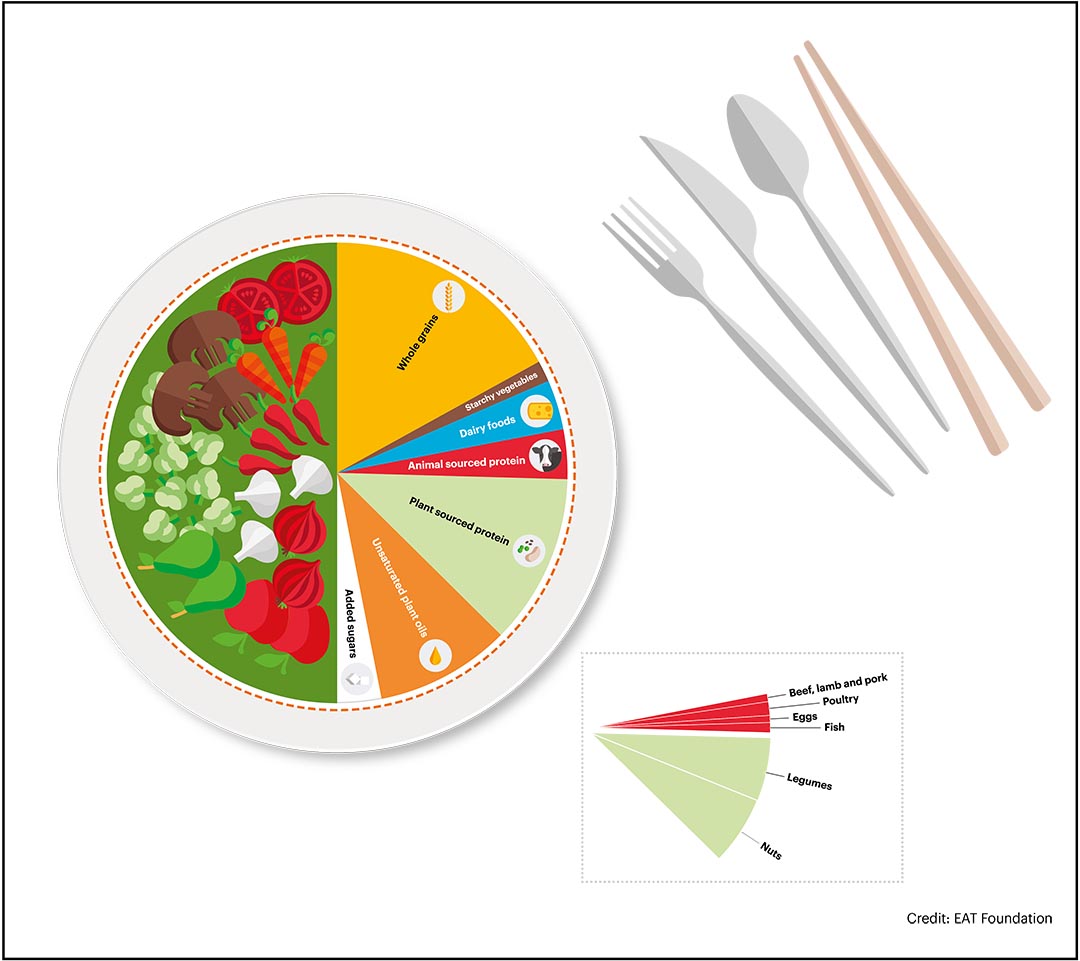 To eat in an environmentally friendly way, people should adopt a 'flexitarian' diet, based mostly on plants with a modest amount of fish, meat and dairy. Image credit - EAT Foundation

But changing the diets of billions of people for the good of the planet – and their health – will require dramatic changes to the current food systems we rely upon.

Food systems encompass everything that happens to food – from production of animal feed and fertilisers, to farm practices, transport, storage and refrigeration, processing, packaging, sale, and eventually its disposal.

Most are designed to deliver large quantities of calories as cheaply as possible, but the price of food does not factor in the subsequent cost to the environment or health services.

‘At the moment we don’t pay for environmental degradation or health when we buy foods,’ said Dr Springmann. He suggests taxing meat and dairy in similar ways to how sugar is taxed in some places already. He also suggests another approach could be updating national dietary guidelines.

And farming practices must improve to reduce water pollution and soil degradation.

‘It’s about nourishing the earth and respecting the laws of nature,’ she said, by creating sustainable and healthy food systems. ‘If we are to have a chance of survival in the next generation and beyond, we’ve got to radically change our production and consumption patterns.’

The ideal food system would ensure everybody can afford nutritious food produced in environmentally friendly ways, while ensuring workers in the system are well paid, but would generate wealth that is shared equitably throughout the system, according Professor Corinna Hawkes, director of the Centre for Food Policy at City, University of London, UK.

One of the reasons why changing the current food systems is difficult is because the ‘colossal’ agribusinesses hold most of the power and earn billions of dollars a year from their products, said Prof. Hawkes.

But she believes these companies can tweak the system for the better. They could sell animal feed that causes cattle to produce less methane, for example, or sell products with less sugar in them.

Governments can also introduce policies that incentivise companies to behave differently, although more research is needed to understand what are the most effective ways of doing this, says Prof. Hawkes.

But the considerable buying power of the public sector – in schools, prisons and hospitals – can shake up the food system by ensuring every public institution serves nutritious food that has been produced ethically and sustainably.

‘There’s no reason why all of those cannot be achieved,’ said Prof. Hawkes.

It is currently unclear exactly how much impact government policies such as taxing sugary drinks or using heavy regulation to reduce consumption of unhealthy foods can have.

There needs to be more research on these before they are rolled out more widely, says Jamie Morrison, head of the food systems programme at the United Nations’ Food and Agriculture Organization. But he said that while governments can push through change, there are already signs that multinationals are seeking help on ways to become more sustainable.

This is partly driven by their customers demanding change, and partly by their own recognition that the way food is produced and consumed is not sustainable in the long term, he says.

‘The private sector gets a lot of blame,’ he said, but that is where the investments and solutions will come from.

In-depth analysis of food supply chains could also help governments identify ‘exactly where we can intervene and with what incentives’ to change company behaviour, added Prof. Hawkes.

That includes understanding why some products are more profitable than others, and what are the incentives for getting specific products onto the market using certain production methods.

‘The farmers know this; the industry knows this. But it’s not out there in the public realm,’ she said.

On 26 September, Prof. Hawkes, Merete Johansson and Jamie Morrison will be participating in a session called Transforming of Food Systems for People, Planet & Climate at the EU’s Research & Innovation days to help shape the scope of EU research and policy on food systems from 2021-2027.

The European Research & Innovation Days, which will take place in Brussels, Belgium, from 24 to 26 September, are designed to bring together policymakers, academics, industry, civil society and entrepreneurs to discuss how research and innovation can help tackle the major issues facing the EU over the next decade.

The idea is to seek a wide range of opinions from experts and interested parties about priorities for the first four years of the EU’s upcoming €100 billion research funding programme, Horizon Europe. In addition to conference sessions, policymakers from the EU and national administrations will be available throughout the event in a space called Horizon Village to gather further input from participants.

The event, which is set to be an annual affair, consists of a policy conference to shape the Horizon Europe work programme, an innovation hub for innovators and investors to network, and a public exhibition called Science is Wonderful!. 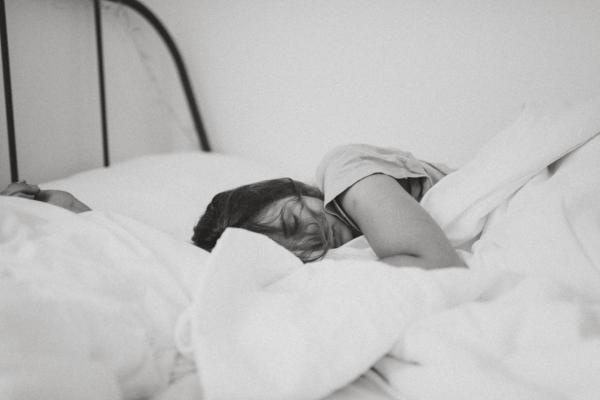 Health
A good night’s sleep is a tonic to remember
Scientists are probing what happens in the brain as people slumber and how they can enjoy the restorative effects of better deep sleep.