In climate drama, the volcano is no villain

On 15 June 1991, the Mount Pinatubo volcano in the Philippines erupted with a cataclysmic explosion so violent, the volcano collapsed in on itself. Its gas and ash cloud reached about 40km into the air, and in the weeks that followed, the cloud entered the stratosphere and spread around the globe. During the next year, the average global temperature dropped by about 0.5°C.

A volcano is an opening in the Earth's crust that allows hot, molten rock to escape to the surface. It also allows gas and ash to escape from the high-temperature interior of the earth.

Volcanic eruptions play an important role in cooling the planet. The sulphur gases from the volcanic plumes combine with other gases in the atmosphere, and these aerosols scatter solar radiation, reflecting it into space. But scientists are concerned that climate change could make eruptions less effective at reducing global temperatures. This feedback loop, in which climate change could hinder or amplify the ability of volcanic eruptions to combat rising temperatures, is currently not included in future climate scenarios.

The VOLCPRO project set out to investigate two different types of eruptions to see if global heating would compromise their cooling effect.

Thomas Aubry, a researcher at the University of Cambridge in the United Kingdom and Marie Skłodowska-Curie Actions (MSCA) fellow on VOLCPRO, wondered whether an eruption like Mount Pinatubo would have had the same cooling effect were it to happen a hundred years later in a world where global temperature rise – through the effects of climate change – continues unchecked.

The first type of eruption, similar to Mount Pinatubo, is known as a high intensity eruption. This type emits plumes of ash and particles that reach 25km or higher into the atmosphere, and contains billions of tons of sulphur gases. Relatively rare, an eruption of this very powerful type arises every few decades –– Mount Pinatubo was one of the largest eruptions the world had seen in a century.

The second type is smaller, but more frequent. ‘We were wondering how climate change will affect these two different types of eruptions, the small ones versus the big ones,’ said Aubry.

The VOLCPRO team modelled historical eruptions showing their influence on climate, and then simulated what would happen if those same eruptions took place in the future, when the climate has changed and global temperatures are hotter.

Their simulations relied on the UK Met Office’s advanced climate model. ‘Inside that (UK Met Office) model, we added another model that can simulate the rise of a volcanic plume and how high this volcanic column can rise depending on, for example, the wind condition during eruption day, or the temperature in the atmosphere on the day, and so on,’ Aubry said.

For the large eruptions, they found that the cooling would be amplified by global warming, ‘which is kind of good news,’ said Aubry. ‘More global warming, more volcanic cooling.’

In a warmer atmosphere, the plumes of high intensity eruptions will rise even higher, allowing the tiny volcanic particles to travel further. This haze of aerosols will cover a wider area, reflecting more solar radiation and amplifying these volcanoes’ temporary cooling effect.

The opposite was true of the smaller, more frequent volcanic eruptions. In those cases, the hotter temperatures thwarted the cooling effects from the eruptions.

However, before they push to have their findings included in scientists’ global climate change projections, Aubry wants to investigate other volcanoes and other models to reinforce their results.

VOLCPRO focused on tropical volcanoes, as eruptions around the equator tend to affect climate globally because the volcanic particles spread to both hemispheres easily. By including volcanoes closer to the poles, the researchers will be able to determine how other eruptions respond to higher temperatures. They also want to include more climate models, not just the UK’s, to make sure that their findings are robust.

Meanwhile, Elena Maters, a former MSCA fellow now based at the University of Cambridge in the United Kingdom, is working to figure out what happens to volcanic ash in the atmosphere and how it influences cloud formation and, ultimately, climate.

Volcanic ash promotes ice formation in the atmosphere, which ultimately replaces water in clouds. Clouds are one of the biggest question marks in climate research, and the more we understand how they are formed and behave, the more precise our models.

‘The common assumption is that liquid water will turn to ice below zero (degrees),’ Maters explained. That is not always the case and small droplets can remain as liquid down to around minus 35°C. But particles in the atmosphere create ‘catalytic surfaces that make it easier for water molecules to form an ice crystal.’

Mineral dust, from sand originating in desert regions around the world such as the Sahara and Gobi deserts, is the dominant source of solid particles in the atmosphere. However, there are many other sources, including volcanic ash.

The INoVA project sought to determine the extent to which volcanic ash aids ice formation.

You can have big eruptions that can quickly (…) release huge amounts of particles, and this has been neglected in a lot of modelling.

‘On a yearly average, there’s about 10 times less volcanic ash (than mineral dust) in the atmosphere,’ Maters said. ‘But you can have big eruptions that can quickly, in a matter of hours to days, release huge amounts of particles, and this has been neglected in a lot of climate modelling and even in cases that look at the impacts of volcanoes.’

As part of INoVA, Maters and colleagues investigated the efficacy of volcanic ash in promoting ice formation. They compared this to the ubiquitous mineral dust, testing to see which types were the most successful.

Volcanic ash is mostly glass, with a sprinkling of minerals like feldspars and iron oxides. The composition of the ash depends on the make-up of the magma roiling underneath, and the speed at which it is explosively ejected from the volcano, among other things.

Previous studies compared only a handful of ash types, said Maters, whose research focuses on volcanic ash reactivity and chemistry. ‘You can’t measure two or three samples and then make a conclusion for all volcanic ash and volcanic eruptions worldwide. They vary hugely in the glass composition, the proportion of glass to minerals, the types of minerals, and so the experiments I did were trying to get to the bottom of the range of efficacy of volcanic ash from different types of eruptions,’ she said.

Maters took nine ash samples with a range of compositions and used them to create nine synthetic samples through melting and rapid cooling. She compared these 18 samples to identify which properties make volcanic ash more active in creating ice. In another study with a group at Karlsruhe Institute of Technology in Germany, Maters and colleagues analysed another 15 volcanic samples to identify their ice-making properties.

She suggested that the most ice-active component in volcanic ash is alkali feldspar, a mineral composed of aluminium, silicon and oxygen commonly found in the Earth’s crust. ‘Now, having this understanding of which minerals in ash are good at nucleating (forming) ice,’ said Maters, ‘you might be able to predict when a volcano erupts whether that volcano, based on its magma composition, could produce ice-active ash.’

While her work was previously very laboratory-based, the Covid pandemic has forced her into modelling, she joked. She is now investigating the 2010 Eyjafjallajökull volcanic eruptions in Iceland to see how that introduced ice-forming particles into the atmosphere, and how those particles compared to the abundance of mineral dust.

The study will examine how volcanic ash has a role in ice formation when we actually plug it into the atmosphere. It will compare it to other types of particle, such as mineral dust and asks the question, “Does it matter?”

As better climate models are developed, ‘It’s a proof of concept to demonstrate that explosive eruptions could be important to include', said Maters. 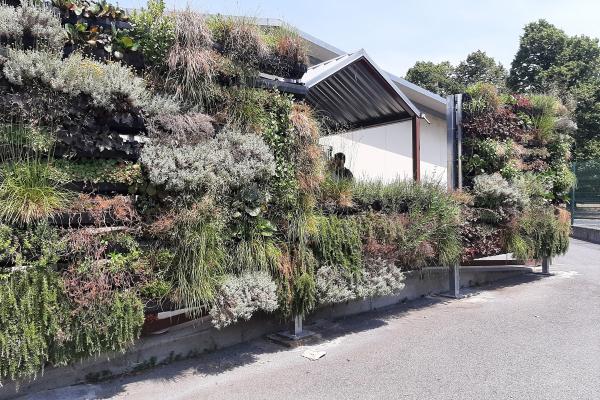