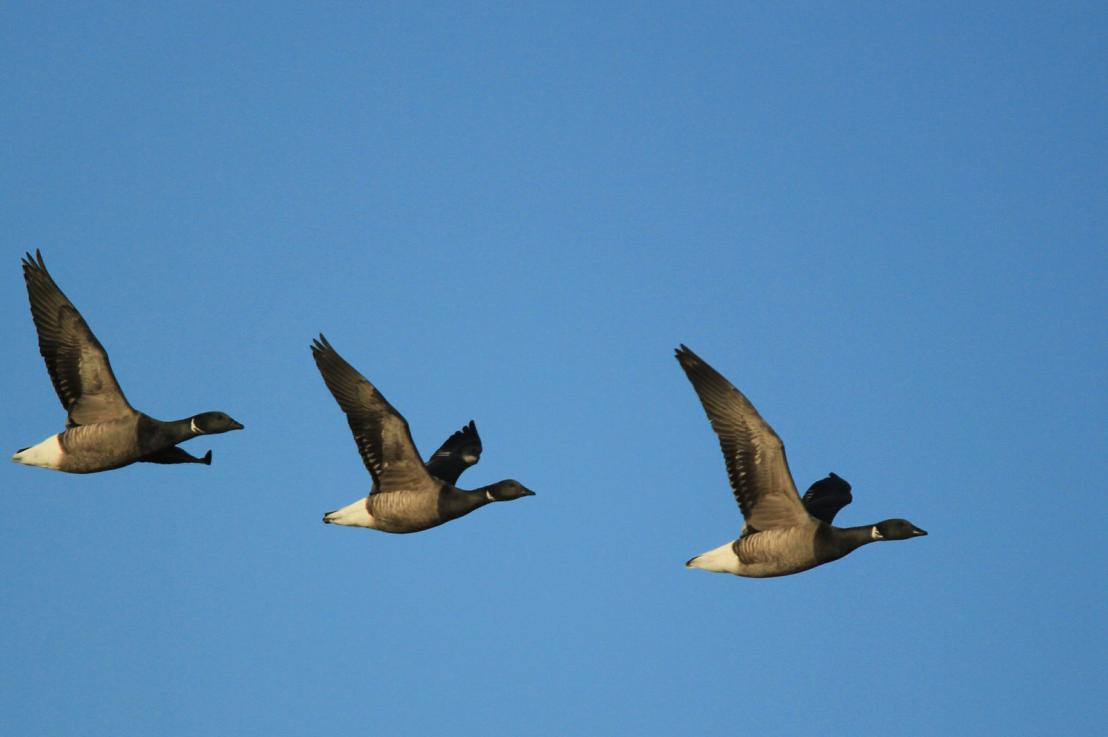 The volatility of seasons is affecting the breeding patterns of Brent geese, a migratory bird species. Image credit - Flickr/milo bostock, licensed under CC BY 2.0

Across an entire desert or ocean, migratory birds make some of the most extreme journeys found in nature, but there are still huge gaps in our understanding of how they manage to travel these vast distances and what a changing climate means for their migration patterns.

‘Some species of migrants might be affected by a changing climate,’ said Professor Stuart Bearhop, an animal ecology expert from the University of Exeter in the UK.

‘There is evidence from a number of populations that climate change probably is going to have some impact on the demography (population levels).’

Prof. Bearhop ran the STATEMIG project, which studied the migration of Brent geese along their journey from Ireland to the Arctic where they breed.

He found that the volatility of today’s seasons was affecting the geese’s population levels because the weather was playing havoc with their breeding patterns.

‘Wet years are predicted to increase with climate change as temperature rises, but, of course, because they travel so far north, it doesn't mean rain, it means snow,’ he said.

Brent geese are more likely to breed when the weather is cold and clear, but when there is more snow there are fewer places to safely raise their young and feed.

'There is evidence from a number of populations that climate change probably is going to have some impact on the demography.'

The team observed that in the colder years the birds were breeding later in the year, causing ripple effects for their populations. The geese did not have enough time to raise their offspring to independence before winter, or there was not enough food for them to survive.

Prof. Bearhop says the snowy years saw more offspring die or be abandoned by adults. That means if snowy years persist then it could pose a long-term risk to the population of these birds.

Prof. Bearhop chose Brent geese because they follow a routine migration and their young stay with their parents for at least a year. These reliable patterns reveal useful insights into population levels and what could be affecting their migration.

When the geese returned to Ireland and Iceland around late August, with their chicks, the researchers could compare the population levels and get an idea of how environmental factors had shaped their journeys.

‘There are multiple factors that have likely driven the evolution of migration, these likely differ among species and the debate is about which ones are most important,’ said Prof. Bearhop.

Prof. Bearhop says the two key reasons birds migrate is because of a competition of territory and to take advantage of seasonal ‘pulses’ of vegetation growth or gluts of insects to ensure they have enough food to raise their young.

STATEMIG’s research emphasises the importance of the latter and Prof. Bearhop hopes it could lead to further research that explores how changes to feeding grounds will affect populations of migratory birds.

According to Dr Sissel Sjöberg, a bird migration researcher from the University of Copenhagen, Denmark, scientists understand some parts of why birds migrate, like knowing where they eat and breed, but they do not have the tools to accurately understand them during the entire migration.

For instance, there are high resolution tags that can be put on some big birds to track their location, but these do not fit on smaller birds which make up most of the ones migrating. 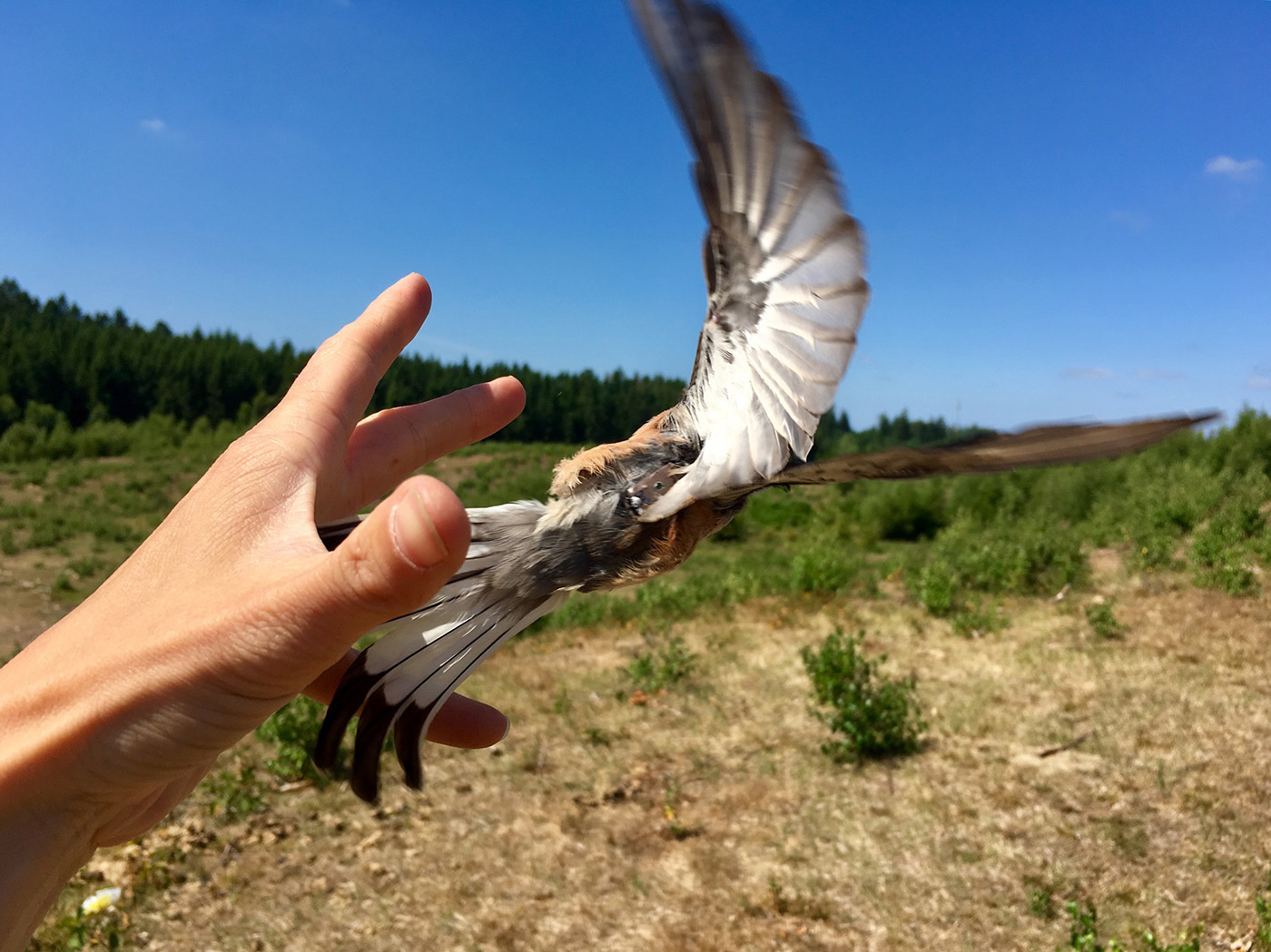 These tags also do not provide insights into other aspects, like altitude or how they traverse over huge, inhospitable areas where they may not be able to land, like the Sahara desert or the Pacific Ocean.

Dr Sjöberg is the principal researcher of the BIRDBARRIER project which is putting tiny backpacks on nocturnal small birds migrating long distances, such as red-backed shrikes and great reed warblers. These backpacks contain an activity log with a pressure sensor to determine heights and provide updates every five minutes of their behaviour during the journey, which can be correlated with weather forecasts or detailed landscape maps.

‘It is clear they go higher in their flights then we thought before,’ said Dr Sjöberg, adding that experts previously thought their size limited them to flying at 2,000-3,000 metres above sea-level, but she has observed them fly at almost 6,000m.

Dr Sjöberg says they could be doing this to find stronger winds that carry them longer distances, which require less energy to fly in and increase their chances of survival.

She says the biggest risk for these birds is to stop in the hostile terrains they cross because it could be difficult to take off again or find the same heights. Safe places to land are crucial to these birds on their intercontinental journeys because they have favourable conditions, including sources of food, but in some places they are getting smaller, for instance, in the Sahara where the desert is expanding.

‘Those (safe) areas are getting smaller and smaller so there is more competition,’ said Dr Sjöberg, who will continue to collect data from the backpacks for several more months before analysing it for some new insights.

She hopes that her research will help identify the most important areas for birds, which could help inform authorities on how to better protect these safe havens.

Here’s what science says about how the highly infectious Delta variant is changing the course of the pandemic.
END_OF_DOCUMENT_TOKEN_TO_BE_REPLACED