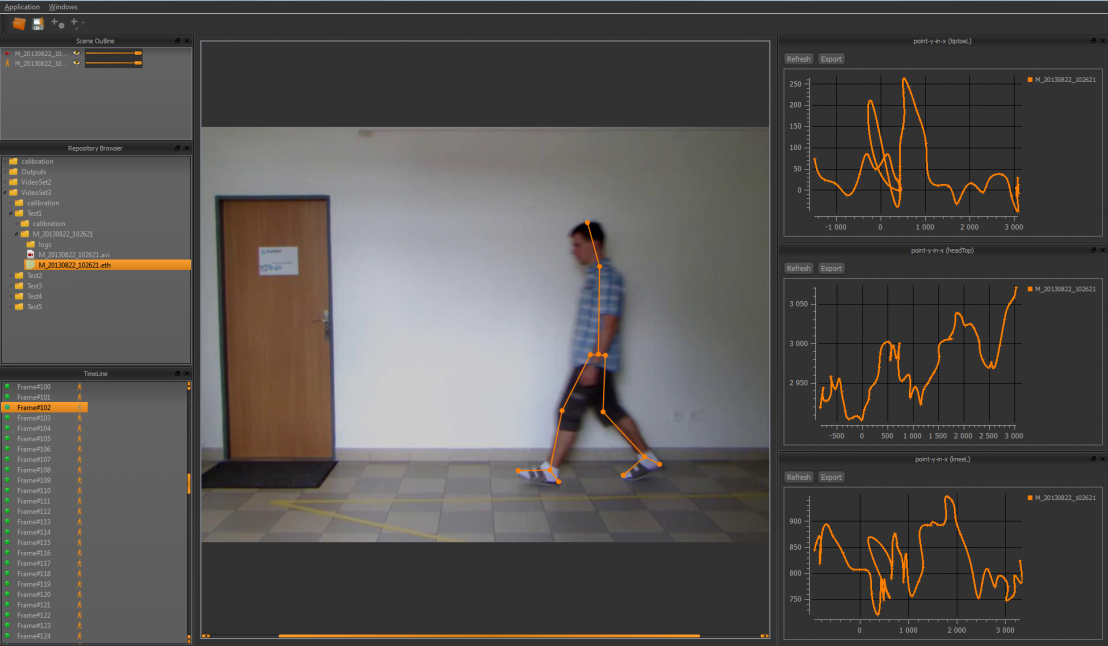 The Kinalisoft software first identifies a person’s silhouette and then measures anatomical movement to distinguish the unique way they walk. Picture credit: Kinalisoft

The ubiquity of CCTV cameras makes it easy to track down criminal suspects – unless they’re wearing a disguise. But even that wouldn’t fool the latest software, which can recognise people based on their anatomy or on the way they walk.

‘Police often have high-quality records of suspects that are hiding their face,’ said Radek Štourač, a computer scientist and owner of the software company Kinalisoft in Brno, Czech Republic. ‘Our system can help recognise such people and trace them as they move in front of cameras.’

Štourač and colleagues’ software for the analysis of gait – that is, the particular way someone walks – has been developed with backing from the European Union. It involves taking a video and separating a human silhouette from the background – a tricky process, as backgrounds themselves often contain all sorts of colourful moving objects.

Having got the silhouette, the software extracts certain data based on the subject’s anatomy – hip and knee joints, for example – to characterise the way they move. Characterising a gait is like taking a fingerprint – once you’ve matched it to a subject, you can identify the subject again based on that information alone.

And like a fingerprint, a gait is unique. Trying to cheat – by faking a limp, for example – generally doesn’t work.

Štourač’s software has just a 0.8 % chance of mistaking a person for someone else when they are walking normally and, remarkably, can perform its characterisation based on just four steps. ‘No additional sensors or cameras,’ said Štourač. ‘Nothing.’

‘Police often have records of suspects hiding their face. Our system can help recognise such people.’

Of course, even a short segment of clear video may be too much to ask in some situations. As computer scientist Professor Christophoros Nikou of the University of Ioannina, Greece, points out, surveillance data often consists of just a single image from behind, an image with the face missing, or an image that is simply very fuzzy.

Prof. Nikou is leading another EU project, called StillNoFace, which is funded under the Marie Skłodowska-Curie scheme and is attempting to perform subject recognition under just these sorts of conditions. The idea is to take a still image, and to identify what three-dimensional pose the subject is in.

This pose allows the software to work out the geometry of the person’s basic anatomy, without getting confused by their orientation in the photo. Based on this geometry, as in the gait analysis, the software can then characterise the subject.

That’s the theory, anyway. Prof. Nikou and colleagues are still in the early stages of development, and have an initial goal of merely working out the sex of a photographed subject based on his or her geometry. ‘We can’t report any results now, but we’ll have a preliminary evaluation of our algorithm in one to two months,’ Prof. Nikou said.

The software being developed by Štourač, Prof. Nikou and others has obvious applications in security, by helping to track criminal suspects or monitor restricted areas, for example. As with any new form of surveillance, however, it also raises the question of human liberty, and whether people want to be identified so easily wherever they go.

‘Compromising freedom of individuals is a very serious issue, and it is very dangerous to ease the legislation there,’ said Štourač. ‘On the other hand, we are living in dangerous times and feeling safe in everyday life is also very important.’

But Prof. Nikou points out that applications may go beyond security, to areas where few would have any unease. ‘Other applications may be envisaged such as the detection in a street video of a person suffering from Alzheimer’s disease, who cannot find the way home and is being sought by his relatives,’ he said.

Soil is a finite resource that is fast deteriorating as a result of human activity.
END_OF_DOCUMENT_TOKEN_TO_BE_REPLACED