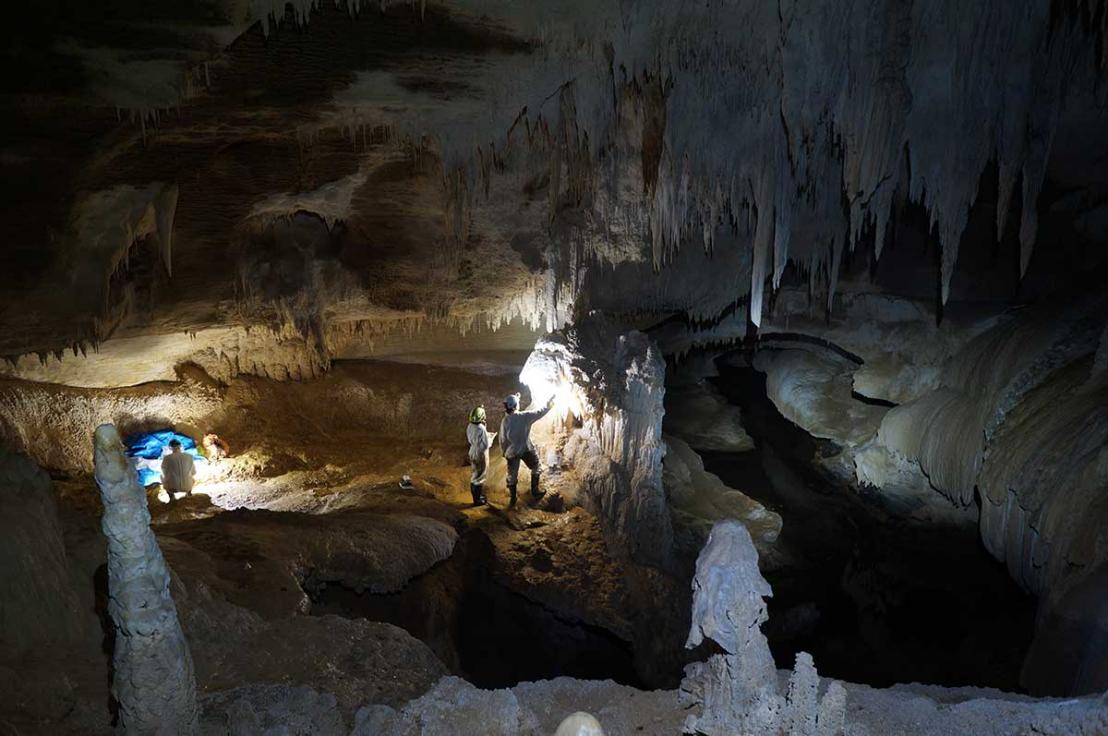 Speleothems, such as stalactites and stalagmites, may hold the secrets of why ancient civilisations collapsed. Image credit - Sebastian Breitenbach

There is a certain romance to speleology, the study of caves, if you can see past the cold and the damp and the dark. Caves are ancient and often beautiful places. And they can be useful. Rock formations in caves, it turns out, hold within them chemical secrets that provide a window on both ancient civilisations and the climate of the future.

Many people think of speleothems, or cave rocks, as being dull and brown. But they come in a wide palette of colours. ‘I was recently with a friend in an abandoned mine where there were some rocks that had a bluish, greenish sheen because they had a lot of copper in them,’ said Dr Sebastian Breitenbach. ‘It's really rare to see that.’

Think of a speleothem and you’re probably imagining stalactites and stalagmites. (To remember which is which, try thinking of stalactites having to hold on tight; they’re the ones that hang from the ceiling.) These rocks are formed as water drips into a cave and the dissolved carbonate it contains gradually precipitates out. You also get flowstones formed from underground streams and thin-walled tubes of rock known as ‘soda straws’.

These rocks grow achingly slowly: a few tenths of a millimetre per year in the fastest cases. This means stalactites can be tens of thousands of years old. And because cave rock is laid down gradually by individual drops of water, it stores a record of their chemical composition.

It turns out that some of these chemical signatures vary depending on the climate at the time. Take for instance the ratio of two isotopes of oxygen, oxygen-16 and oxygen-18. Rainwater contains a specific ratio of the two and so by grinding down samples from speleothems and analysing the isotope ratio at different points along the length of the rock, geochemists can get a hint of how rainy it was, or where the rain originated from when the rock formed. There are plenty of other proxies besides oxygen too.

This record of ancient climate entombed in stone turns out to be useful in giving us a handle on what life was like for ancient civilisations. It can also tell us about periods such as the mysterious Bronze Age collapse.

This was the 50-year period in which several major civilisations in the Mediterranean, including the Egyptian empire, the Mycenaeans and the Hittites, all collapsed about 3,000 years ago. Some reckon this might have been to do with a megadrought that hit the region. But this is a controversial idea and there are plenty of other theories. Some ancient texts pin the blame on invading hordes known as the ‘sea peoples’.

‘We are sure that they (ancient cultures in Turkey) must have been heavily influenced by environmental conditions.’

Data from caves can help illuminate what might have gone on by at least showing when and where there was a drought. But there are gaps in the data, not least when it comes to Turkey.

‘Turkey has been home to many important ancient human cultures, from some of the world's earliest farming societies in the Palaeolithic to more modern societies like the Hittites, classical Greeks, Roman, Byzantine and Ottoman empires,’ said Dr Ezgi Unal-Imer at the Middle East Technical University in Ankara, Turkey. ‘We are sure that they must have been heavily influenced by (changing) environmental conditions.’

That’s why she began the Speleotolia project, with the goal of collecting high resolution paleoclimate data from Turkey. She has been collecting samples from caves over the past few years including 10 stalagmites from western Turkey.

Five of these cover the Holocene period and she has one sample that provides a continuous line of growth going back 1,825 years. ‘This covers almost the entire common era – it’s a really good sample,’ she said.

She’s currently about halfway through drilling 420 samples, which will help her reconstruct the past climate conditions. Dr Unal-Imer is excited about what they’ll uncover. We just don’t know what we will find, she says.

One thing her project won’t do, however, is quantify how much rain fell in any given year in the past.

At the moment, most speleothem data can only signal short-term climate trends, says Dr Breitenbach who is based at Northumbria University in Newcastle, UK. In other words, it can tell us a certain period was much rainier than the one before – but not how many millimetres of rain fell. Why so?

Well, let’s take the ratio of oxygen isotopes in a rock again. In truth, though this is influenced by rainfall it is also nudged up and down by other factors like temperature, and the topography and humidity of the particular cave. 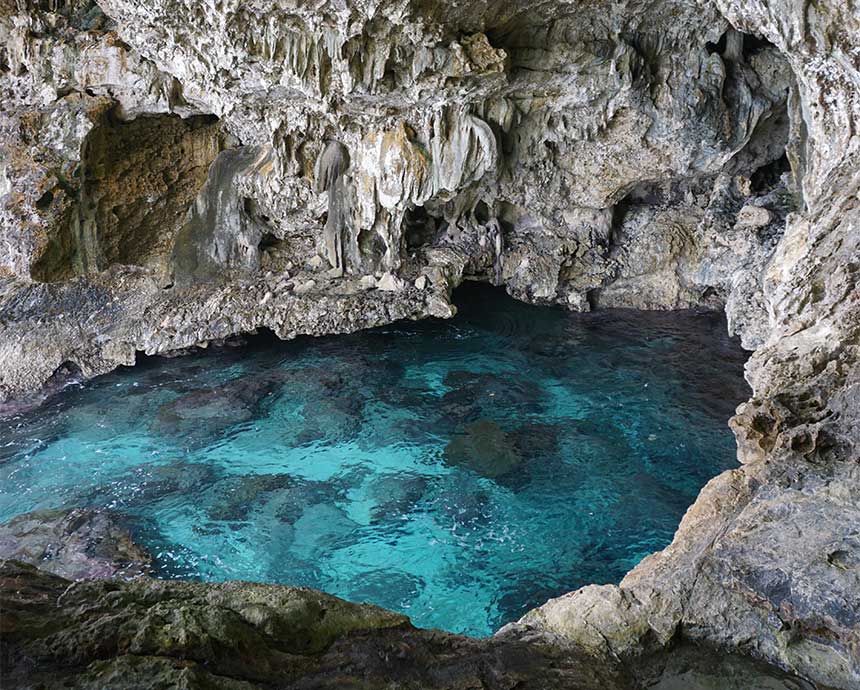 The QUEST project that Breitenbach led is trying to change that uncertainty, using two strategies. The first involves detailed work on one of the Waitomo caves in New Zealand. The plan is to measure many proxies in parallel and see how they all vary over time. Variations in one proxy might be caused by several factors and it’s impossible to know how much each contributed. But look at the variations in 10 or 15 proxies in tandem and there should be only one hypothesis for how the rainfall has changed quantitatively, say, that fits all the facts. ‘Then it’s like an Agatha Christie crime novel,’ said Dr Breitenbach. ‘All the facts that we learned from the proxies must fit in the interpretation.’

One minus to this strategy, however, is that it requires a detailed understanding of the cave where the speleothem samples were taken. This means the researchers would have to summon their inner detective afresh with nearly every rock sample.

The second strategy is to discover new proxies that really are only impacted by one variable and so can provide quantitative data directly. Dr Adam Hartland at the University of Waikato in Hamilton, New Zealand has been leading this part of the work.

He’s discovered some molecules known as organo-metallic complexes for which it’s possible to quantify how they change in cave rocks in response to temperature in great detail. The trick will be to calibrate this proxy, so that we can say a measurement of a certain amount of the complex signifies a certain temperature. ‘We know how to do that – but we haven't quite done it yet,’ said Dr Breitenbach.

What does all this have to do with the future though? Well, harvesting information about the past is crucial for answering questions about what will happen to rainfall and temperature in the face of the climate emergency. Take the El Niño–Southern Oscillation (ENSO), a weather pattern that affects ocean temperatures and shifts rain around in the southern hemisphere with catastrophic effects on fishing and farming.

At the moment, we have a poor grasp of how ENSO was affected by climate change in the past. But with speleothems, we can go back in time and look at a period that was particularly warm. ‘We can see how often there were El Niños, how strong were they, and where were their strongest impacts? Then we can use the past as a key to the future,’ said Dr Breitenbach.

Cancer research needs to change so that cancer treatment can become truly personalised, according to Professor Martine Piccart.
END_OF_DOCUMENT_TOKEN_TO_BE_REPLACED