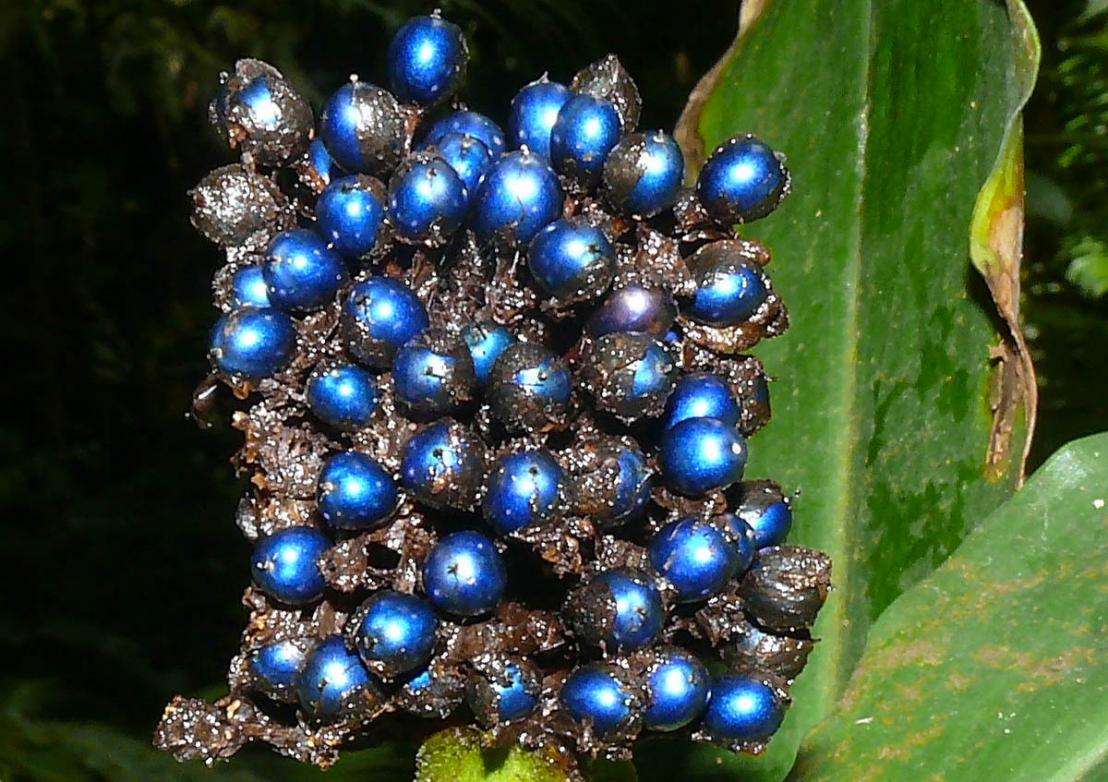 The reflected colour of the marble berry differs from cell to cell, giving it a striking appearance. Image credit - Juliano Costa/Wikimedia, licenced under CC BY-SA 3.0

The iridescence of marble berries and the clever, light-bending perforations of microalgae are some lessons from nature that scientists are drawing upon to create biodegradable glitter and makeup pigments, and bionic algae to use in lasers or to clean pollutants.

Nature has spent millions of years evolving answers to problems. It has come up with ingenious solutions to build strong structures, harvest energy and produce iridescent colours. Scientists are increasingly turning to the natural world for inspiration to create new, greener materials and technologies.

In the lab of Dr Silvia Vignolini at the University of Cambridge, UK, scientists are designing biodegradable glitter and natural dyes for food colouring and cosmetics as part of a project called PlaMatSu.

To do this, they are using cellulose – a natural fibre, which gives strength and stiffness to trees and plants. It is what we make paper from. ‘It is the most abundant material we have on the planet,’ said Dr Vignolini. ‘Everyone thinks of its strength, but not everyone knows you can use cellulose to make pigments.’

Pure cellulose is snow white. To conjure colours, Dr Vignolini carves tiny shapes out of cellulose that light bounces off of as bright colours – something called structural colour.

‘By structuring material on a nanoscale, light interacts with it in a way that creates colour,’ Dr Vignolini said. We are more familiar with this phenomenon than we might realise – think of the hues soap bubbles generate by bending light or a butterfly’s colourful wings. In these examples, colour changes according to the angle of view.

Dr Vignolini was inspired by the iridescent colours of the natural world caused by a material’s structure rather than the presence of pigments. The shiny metallic blue fruit of marble berry (Pollia condensate) is one of the most striking examples that Dr Vignolini has studied, with colour reflectance changing between cells and giving the fruit a glittery appearance. A different example is the Cyphochilus beetle, which she discovered is whiter than paper thanks to ultra-thin scales deflecting all colours. 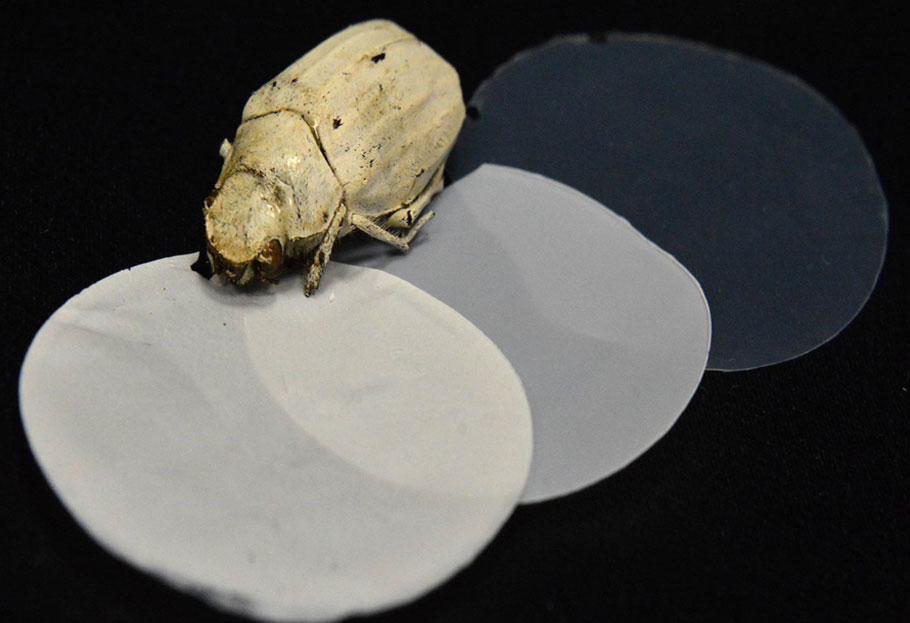 ‘This is made from the same material that is in every cell wall of plants. It makes 40% of a salad,’ said Dr Vignolini of her glitter. ‘It’s not harmful if it disperses into the environment, and it is also edible.’

She collaborates with cosmetic companies to generate plant-based, biodegradable pigments, including for makeup and skin care.

She also works on new structural food colourings from organic waste as the food industry is working towards replacing synthetic colourants. ‘We can use the leftover stuff from paper making processes, or agricultural waste, like mango or banana peel, which is rich in cellulose, and then use it to make colouration,’ said Dr Vignolini.

Others in the PlaMatSu network are looking beyond colour to deploy surface ideas drawn from nature. Teams at the University of Freiburg, Germany, and University of Fribourg, Switzerland, are looking at how rough plant surfaces deter insects. They could make biodegradable materials that might be sprayed to hinder bugs from feeding on a crop or walls to deter bugs.

He has investigated molecules and nanostructures for LED technologies, solar cells and optical devices. While teaching undergrad environmental science students, he encountered diatoms. He became inspired to create bionic algae that can manipulate light for laser technologies or to deliver drugs.

‘By structuring material on a nanoscale, light interacts with it in a way that creates colour.'

Diatoms are single celled algae, each one encased in silica, their own glass house. These can be fan or rod-shaped, zigzag, circular, or triangular. ‘They are beautiful natural objects which have inspired artists, fashion designers and architects,’ said Prof. Farinola. They occur in seas, lakes and ponds and manufacture at least 20% of the oxygen that we breathe.

‘The biggest species can be seen with the naked eye, but only as small dots,’ said Prof. Farinola. ‘You cannot appreciate the beauty of their shape and structure.’

Under a microscope, you may see their glass houses potted with pores, or with a variety of ridges and elevations. These markings assist them to focus the best wavelengths of light to the cell for photosynthesis, while scattering or filtering out harmful wavelengths. It makes them natural photonic structures, meaning that they are able to manipulate light.

‘Photonic crystals are used a lot in laser technologies,’ said Prof. Farinola, and he believes diatoms can inspire us to create new photonic technologies which could be for light detection, computing or robotics, for example.

As part of the BEEP network exploring bioinspired solar harvesting materials, Prof. Farinola is taking on a PhD student to study diatom photosynthesis and create a bionic diatom with an extra piece of light-gathering equipment – certain molecules.

‘We incorporate molecules which cover a range of wavelengths that the diatom does not naturally absorb,’ said Prof. Farinola. This acts as an artificial antenna, to absorb extra light and supercharge photosynthesis. This should boost diatom growth in a tank of seawater. 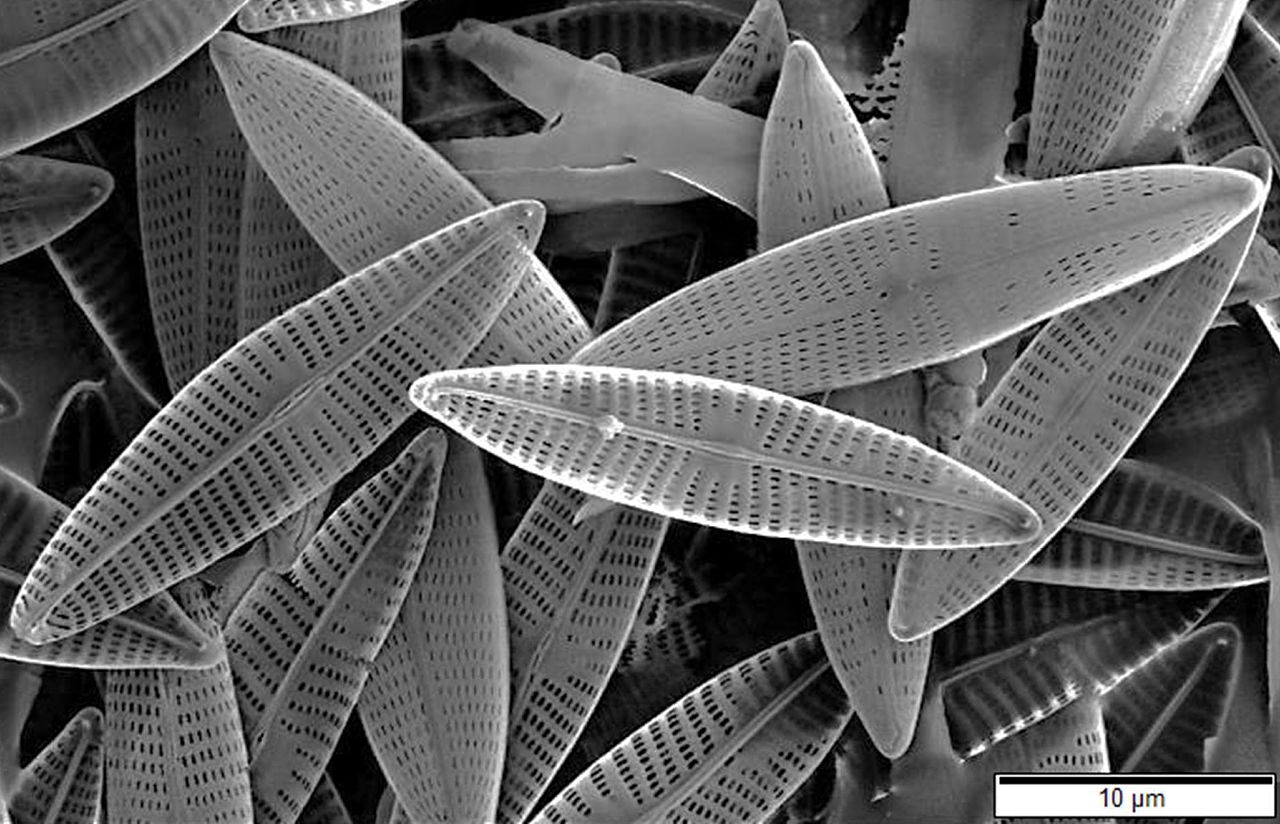 The Cyphochilus beetle is whiter than paper thanks to ultra-thin scales deflecting all colours. Image credit - Olimpia Onelli

Prof. Farinola’s research may see special diatoms grown for delivering drugs. His lab in Bari can either modify their glasshouses after removing the cell inside, or attach a substance to diatom food to sneak it inside the shell. Already, his group attached antioxidant molecules on diatoms’ shells that then snagged the antibiotic ciprofloxacin, which could potentially be delivered inside a patient.

In another example, living diatoms took up bisphosphonates, which is a drug well known for improving bone status in osteoporosis patients. ‘We then remove all the living matter and we have silica with bisphosphonate left,’ said Prof. Farinola. He envisions covering an implant with these silica shells in order to stimulate bone growth after surgery, though this has not yet been tried in patients.

His team is also looking at how silica from diatom shells could be used to clean up different pollutants in the environment. The researchers covered the shells of dead diatoms with a special polymer (polydopamine) and stuck on enzymes which could in principle be used to break down pollutants, according to Prof. Farinola.

‘We want to breach the boundary between biology, chemistry and physics in the context of studying plants,’ said Dr Vignolini, who coordinates BEEP. She sees this network and PlatMaSu as hopefully enabling new, greener materials that meet social needs.

Pigment colour absorbs and reflects different wavelengths of visible light, each of which corresponds to a particular colour. If a painted wall absorbs all wavelengths of light except for blue, then the wall will look blue. Chemical pigments produce a colour that looks the same from all angles and will fade over time.

In contrast, structural colour does not absorb light but instead reflects it from structures such as scales. The wavelength of the reflected light depends on the orientation of the object and the angle from which the viewer sees it. Multi-layered structures can cause iridescence, as the colour changes depending on the viewing angle. Unlike chemical pigments, structural colour is resistant to fading. It is widespread in the natural world, and can be found in chameleons and peacock feathers.

A better understanding of how sand behaves in the wind should help protect tracks and trains.
END_OF_DOCUMENT_TOKEN_TO_BE_REPLACED

Cancer research needs to change so that cancer treatment can become truly personalised, according to Professor Martine Piccart.
END_OF_DOCUMENT_TOKEN_TO_BE_REPLACED