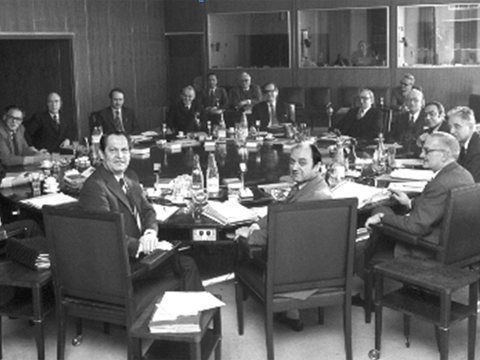 The European Regional Development Fund was born 40 years ago, with the adoption of a Regulation on 18 March 1975 that laid the foundations for today’s EU regional policy.

In December 1974, the European Commission had announced that the then European Economic Community (EEC) of nine Member States was to have a European Regional Development Fund to ‘finance the growth of its most backward areas’.

A fund of 1.3 billion units of account (the forerunner of the euro) was to be established for a trial period of three years starting in 1975.

In 1975 the poorest areas of the EEC were southern Italy, most of Ireland, western and south-western France, northern Holland, parts of West Germany along the (then) eastern border, and large parts of the United Kingdom, particularly Wales and Scotland.

Origins in the founding Treaty

The founding Treaty of Rome of 1957 had indeed been committed to balanced regional development as a means for achieving integration and reducing the differences between various regions of the European Economic Community.

The first comprehensive guidelines for a regional policy had been proposed by the Commission in 1973. Early moves towards establishing a Regional Development Fund were however delayed by international monetary turmoil and the oil crisis, and it was not until 1974 that agreement was reached.

Three types of actions were eligible under the new Regional Development Fund for up to 50 % of public expenditure support:

Member States had to apply for ERDF support at project level. Decisions were then taken in a committee of Member States based on Commission proposals.

Regional Policy Commissioner George Thomson noted that the new fund would ‘restore faith in the Community for millions of ordinary citizens who have waited a long time for the commitment to set up a regional fund to be fulfilled’.

At a time when the UK was renegotiating its terms of membership, he also pointed out that the UK would be entitled to 28 % of the fund while its contribution to the fund was less than 17 %. He also stressed that the new policy would be concerned about the problems of ageing industry (typical of the UK at that time) as well as the Community’s agricultural problems.