The HyTrEc project brought together representatives from industry, academia, government, funding bodies and SMEs to support the collaborative development of strategic hydrogen initiatives. In this role, it informed and shaped the development of infrastructure, technology, skills and financial instruments needed to implement hydrogen-based technologies across the North Sea Region. 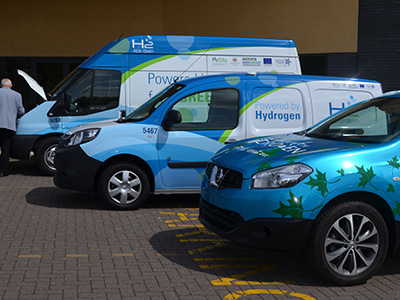 To support sustainable energy alternatives, governments from across the North Sea Region have developed their own strategies for implementing hydrogen-based technologies.

The HyTrEc project brought these individual efforts together via the North Sea Hydrogen Transport Stakeholder Group, which successfully supported the validation, promotion and adoption of innovative hydrogen technologies across the North Sea Region, thus boosting the region’s competitiveness within the transport and associated energy sectors.

As a result, the project successfully raised stakeholder and citizen awareness as to the benefits and effectiveness of using hydrogen technology for energy and transport.

As Europe’s cities strive to become more sustainable, replacing oil and gas as a primary energy source with alternative fuel options is a major goal. However, this shift has been constrained by the historic influence of oil and gas, making it difficult to develop less mature alternative technology solutions such as hydrogen.

Knowing that hydrogen has the potential to replace conventional systems and deliver urban areas with significant economic and environmental benefits, many local and national governments across the North Sea Region started developing their own initiatives. Unfortunately, the problem with this piecemeal, national-based approach is it results in significant variations and disparities between countries, a situation which hinders regional competitiveness.

To create a unified hydrogen strategy, the HyTrEc project’s North Sea Hydrogen Transport Stakeholder Group brought together representatives from industry, academia, government, funding bodies and SMEs to serve as a platform for supporting the collaborative development of strategic hydrogen initiatives at the regional, supra-regional and transnational levels.

One of the group’s key initiatives was its work on improving access to skills and training. The project established a LinkedIn educational forum that offered several training courses and included a skills placement scheme. Over 100 members from 18 different countries, including from outside Europe, have joined to discuss issues relating to hydrogen training needs. The project’s Hydrogen Awareness certification training has been utilised by numerous partners, including those in Aberdeen, where the materials were used to train city apprentices.

To raise awareness among the general public, the group developed a low-cost hydrogen demonstrator vehicle, highlighting how innovation can remove the commercial barriers that prevent large-scale uptake of hydrogen technologies. The four vehicles deployed in Aberdeen were trialled within the Local Authority’s fleet and showcased at several high-profile events. The project also established a refuelling station demonstrator in Denmark, which contributed to the establishment of a Danish refuelling network and supported the development of local fuel cell vehicles.

Total investment for the project “HYTREC” is EUR 3 280 000, with the EU’s European Regional Development Fund contributing EUR 1 640 000 through the “North Sea Region” Operational Programme for the 2007 – 2013 programming period.