An abandoned quarry village on the north west Wales coast has been restored and expanded to become a thriving centre for Welsh culture. The Nant Gwrtheyrn centre, in the West Wales and Valleys region of the United Kingdom, now has modern facilities to teach the Welsh language, share local cultural and industrial heritage, and welcome tourists visiting the picturesque surrounding countryside. 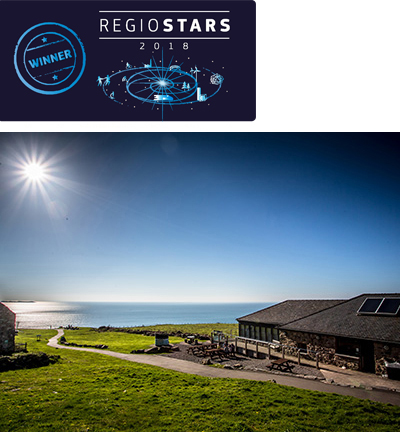 " The cultural centre has been a huge success in an area of limited economic activity. It is now a major employer and contributor to the local economy, and known internationally as a visitor attraction and promoter of the Welsh language and culture. "

A small Welsh language centre already existed at the isolated site in a steep valley. The project built a new road, dedicated teaching and function rooms, visitor accommodation, a café, a shop and a heritage centre.

The improvements have made the centre more accessible, increased its capacity and expanded its income. Tens of thousands of language students, tourists and event participants now come to Nant Gwrtheyrn each year from around the world. With turnover of £1.28 million (EUR 1.44 million) in 2017 and 30 employees, the centre makes a strong financial contribution to its local area.

Nant Gwrtheyrn rose from the ruins of a village built on the Welsh coast in 1860 to house workers in a local quarry and their families. When the quarry closed in the 1940s, people moved away.

But there was local interest in the site’s heritage and in promoting Welsh culture. In 1982, a community group bought the village, renovated buildings and started their own Welsh language school. Investments by the EU, the Welsh government and private sources in this project has allowed the centre to achieve much more of its potential.

Cars and coaches can now access the village more easily down the new road. Traditional stone houses have been renovated as tourist accommodations, while a new block provides visitor rooms for groups. The café, shop and function rooms are also in new buildings, which regularly host weddings and conferences.

Some of the buildings now host Welsh language courses for many more students, from beginner to advanced levels. A free exhibition in the heritage centre is a permanent source of information about local history and legends, along with the history of the Welsh language. Designed to bring information to life, it includes a quarryman’s cottage furnished as it would have been in 1910, period photographs, film and radio, and educational computer games.

Around 120 people can stay at the renovated village, with space for 65 in the café and 150 in the function facilities. The centre has exceeded the targets for visitor numbers, jobs and growth in its original business plan. Each year, the centre attracts 35 weddings, 40 000 day visitors and 600 attendees on Welsh language courses. More staff are being recruited as the centre continues to grow.

Nant Gwrtheyrn is now a key local employer. Over half of it staff is under 35 years old. Most are women. Neighbouring businesses also benefit, providing building work, Welsh food and drinks, and services to support the centre.

Its success is spreading. As Nant Gwrtheyrn has become more widely known nationally and internationally, demand for its Welsh language courses exceeds capacity. Two other locations in Wales are hosting the excess visitors and are reaping the benefits of Nant Gwrtheyrn’s heritage tourism.

"I enjoy working in Nant Gwrtheyrn because it is a magical location, full of rich Welsh history, and I get the opportunity to meet people from all over the world. There are very few places that I can think of where one works in an office with such magnificent views.”

“It is so interesting to speak on a weekly basis to people who are enthusiastic about learning Welsh, with enquiries coming from all walks of life. The location really inspires the learning of our language. This place truly is a national treasure.”

Total investment for the project “Nant Gwrtheyrn: Welsh Language and Cultural Heritage Centre” is EUR 7 220 000, with the EU’s European Regional Development Fund contributing EUR 3 390 000 through the “West Wales and the Valleys” Operational Programme for the 2007-2013 programming period. The investment falls under the priority “Attractive sustainable business environment in which to invest and work”.

West Wales & The Valleys View programmes for this region