A technology project encouraged students in Spain and Portugal to share their favourite local landscapes, monuments and traditions with their counterparts across the border, using a collaborative online tool. The youngsters then visited each other in the Castilla y León, Norte and Centro regions to cement their links and experience these local highlights in person during a series of exchanges. 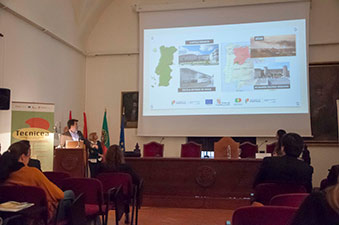 " TECNICEA encouraged the use of ICT tools among students from both sides of the border area between Spain and Portugal to promote the schools’ natural, cultural and social backgrounds and to stimulate the wish to know the contexts where their twinned classmates lived. Additionally, the participant schools were given the opportunity to establish links for further collaboration and the educational authorities had the chance to strengthen cross-border cooperation. "

Students in Spain and Portugal have used a network of online communities to get to know their own region and that of their neighbours. The TECNICEA project brought together 16 secondary schools – eight in Castilla y León in Spain and eight in the Centro and Norte regions of Portugal – through blogs, online presentations, micro-documentaries and student exchanges.

The TECNICEA platform created a series of virtual communities, enabling the participating schools to establish links for further collaboration and allowing the educational authorities to strengthen existing cross-border cooperation. The project encouraged the use of ICT tools among students to promote the schools’ natural, cultural and social backgrounds and created a desire to understand the context in which their twinned classmates lived.

On- and offline interaction

Each school in Portugal was paired with a school in Spain; students at each institution then used an online platform to develop small multimedia productions based on their neighbourhood, led by a class tutor. These projects focused on the students’ immediate surroundings and invited them to explore their natural and cultural environment, local traditions, customs and languages. The projects were produced in Spanish and Portuguese and translated by the students themselves.

This virtual community was complemented by short school exchanges in which the two groups of students visited their counterparts at their paired school. During these visits they were able to explore in real life the places they had learned about online from their hosts. For many, it was the first time they had visited the area, despite the proximity, and the exchanges attracted attention from the local media. When the two groups met, they were each keen to experience the traditions they knew virtually and learn about their partners’ local context.

The students involved in TECNICEA gained valuable experience of online technologies through the collaborative website, as well as a deeper understanding of their own environment through promoting a feature of their neighbourhood or culture. In total, 320 teachers, school leaders and pupils took part in the project.

TECNICEA was coordinated by representatives of the three participating regional authorities with responsibility for education in their respective regions. The project was an opportunity for them to promote the cultural and socio-economic contexts of the border regions, improve educational programmes and reinforce the links between the two countries’ educational authorities.

Total investment for the project “Technology and Innovation in The Educational Context of Students” is EUR 106 471, with the EU’s European Regional Development Fund contributing EUR 79 853 through the Operational Programme “Spain - Portugal” for the 2007-2013 programming period. The investment falls under the priority “Cooperation and joint management for Promoting competitiveness and employment promotion”.