In the Centro region of Portugal, the Ecomare project connects the port of Aveiro with the coastal lagoon of Ria de Aveiro to help conserve, protect and ensure the sustainable use of marine biological resources. By linking existing grey infrastructure with nearby green and blue areas, Ecomare exemplifies what modern port cities could look like. 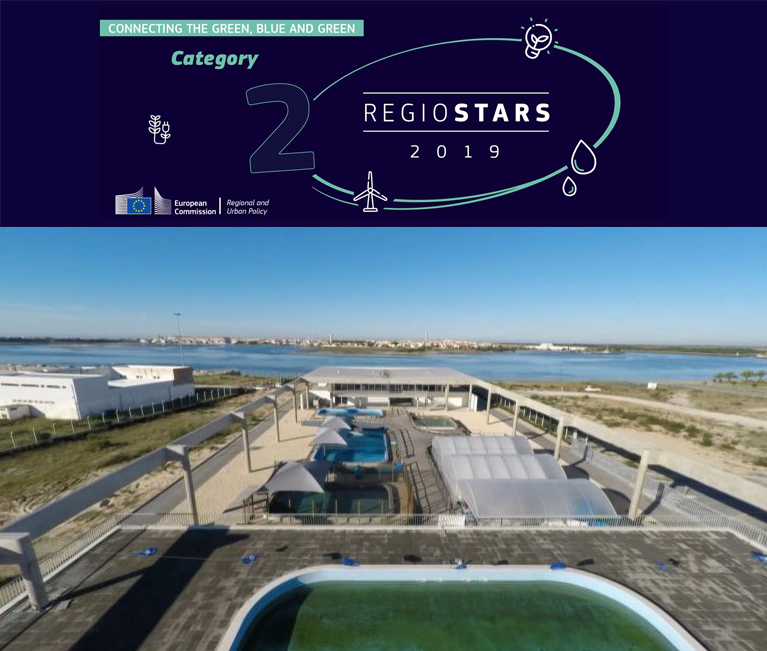 The Ecomare project connects the port of Aveiro with the Ria de Aveiro lagoon to ensure the sustainable use of marine biological resources. ©Ecomare

" Ecomare merges the grey area of Port of Aveiro with the green of an iconic coastal lagoon, Ria de Aveiro, to promote the conservation (rescue, rehabilitation and return to the wild of seabirds, marine turtles, seals, and dolphins) and sustainable use of indigenous marine biological resources (the blue). Ecomare already responded to 944 animal rescues. Ecomare constitutes demonstration facilities showcase, at a pre-industrial scale, for sustainable aquaculture and blue biotechnology solutions. "

A collaboration between the University of Aveiro, the Municipality of Ílhavo and the administration of the Port of Aveiro led to the creation of the Ecomare rescue and rehabilitation centre in the existing port. The project is an example of how existing infrastructure in developed coastal areas with privileged access to the sea can be used for conservation and the valuation of ecosystem goods and services.

The facility’s primary goal is marine conservation. The complex has a rescue team that responds to emergencies 24/7, an intensive care unit, portable diagnostic tools and a custom-designed ambulance to rescue marine organisms. Since its opening, the team has made nearly 1 000 animal rescues, of which nearly a third have been successfully rehabilitated and returned to the ocean. The facility is the first national response site for fauna affected by oil spills on the coast of Portugal.

Thanks to several large tanks – the largest one holds 1.5 million cubic metres of water – the complex can house and rehabilitate 1 000 animals annually. A unique feature is the presence of a marine mammal tissue bank containing frozen samples for research. It has the country’s only living library of marine invertebrates. The latter is being used to supply biomass for sustainable aquaculture and biotechnology trials. This kind of technological development is contributing to the region’s blue bioeconomy, delivering new services and products inspired by the ocean.

From regional to national

What started as a regional partnership between different entities in the Aveiro region has grown to a national collaboration. National institutes are working with Ecomare to protect marine life and resources along the entire Portuguese coast. This includes promotion of sustainable ocean management, raising awareness about the impact of marine litter and developing blue biotechnology and aquaculture solutions. The project is organising paid training courses on handling, rehabilitating and even performing necropsy of marine organisms.

Ecomare is collaborating with the Portuguese Maritime Authority and Food Safety Authority to fight unreported and illegal fishing by using biotechnological tools that pinpoint the geographic origin of seafood. In doing so, the project has helped dismantle several criminal networks active in the illegal trade of bivalves and glass eels along the coastline.

The project is working with private companies in its attempt to pioneer the region’s blue bioeconomy development. In collaboration with Jeronimo Martins, a leading Portuguese business group, Ecomare is setting up the country’s first aquaculture project aimed at producing Atlantic salmon in offshore submerged cases. Local production of this fish, instead of thousands of kilometres away, will result in a significantly lower carbon footprint. At the same time, it will increase the region’s marine biodiversity as offshore aquaculture prohibits other, more intrusive commercial fishing activities.

The project’s positive impact on the coastal region is highlighting its relevancy and timing. Moreover, the region’s population actively supports the project’s efforts, aware of the ecological, social and economic relevance of the lagoon. The centre often receives civilian calls on injured marine animals and several citizen science initiatives are currently ongoing, all because of the awareness the project has raised.

Total investment for the project “Ecomare: Innovation and Sustainability Laboratory of Marine Biological Resources” is EUR 4 861 099, with the EU’s European Regional Development Fund contributing EUR 4 100 308 through the “Centro” Operational Programme for the 2007-2013 programming period. The investment falls under the priority “Protecting and enhancing the environment”.